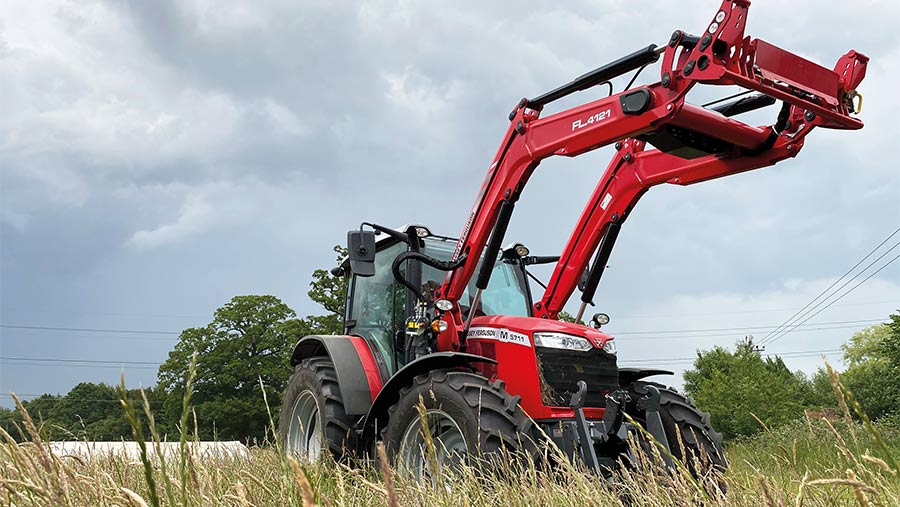 Massey Ferguson has enjoyed a fair amount of success in the loader tractor market, with its basic Global Series catering for the keep-it-simple brigade and the comparatively swish S series satisfying those that like a little more refinement.

However, the Global Series brand is now being phased out and the M-badged range is sidling in to replace it.

There’s no posh alternative to the 4700Ms, but the 5700M and high-spec S models have broadly the same power outputs.

So, for those willing to forgo the frills, it looks as though they can get a decent amount of tractor for their money.

Big selling points for the M are the optional Dyna-4 transmission – which is far more refined than the simpler 12×12 – and a tri-hydraulic pump setup that dramatically speeds up loader cycle times.

When it’s configured to a high spec, the M actually gets pretty close to an entry-level S, albeit without a sloping bonnet and higher-spec cab.

This could be seen as a move to prevent potential S customers downgrading to a more keenly priced M, but the reality is that they’d probably end up costing about the same.

The result is that the 115hp 5711M is the most powerful model that can be specced with a semi-powershift transmission.

This comes in £8,650 cheaper than the equivalent S model with the same gearbox. However, as we’re working off list prices, the difference will be less on farm.

To find out how well the new range performs, we put a well-specced 5711M with Dyna-4 transmission to work on mucking out and mowing duties.

All M models use Agco’s 4.4-litre, four-cylinder engine, which is the same block fitted in the premium S line.

Power outputs are similar in the two ranges, so it’s fairly easy to draw price and spec comparisons between the two.

However, as the M is a brand-new model, its engines meet the latest Stage 5 regulations.

This means those tractors have an SCR system, diesel oxidation catalyst and a relatively new add-on that MF calls a soot catalyst.

Most of this will be of minor interest to buyers, apart from the fact MF has positioned the AdBlue filler on the opposite side to the fuel tank, which makes refills more tedious than they need be.

As for power outputs, all models in the range have gained 5hp over their old Global Series equivalents and they span a 95hp to 135hp range – this puts the 115hp 5711M roughly in the middle.

These are all max power figures (MF avoids stating rated powers), which is worth bearing in mind when comparing against brands that quote the lower-rated power figure.

Engine settings are, understandably, simple, with a foot throttle, hand throttle and one engine speed memory.

This is activated via a button on the console and is handy for quickly achieving the desired revs for a job. We wouldn’t expect any more from a tractor of this spec.

Many of MF’s lower-spec loader tractors come with a basic 12×12 transmission, but M models up to 115hp have the option of adding the Dyna-4 semi-powershift box.

This, combined with the optional Power Control shuttle lever used on higher-spec tractors, makes the M-series seem a lot more premium than it actually is – it’s a big jump from the simple 12-speeder and mechanical shuttle.

That said, it’s worth noting that the 12-speed model can be specced with a simplified version of the Power Control lever, which gives it a bit more refinement.

Dyna-4 has been around for years, but for those unfamiliar with the setup, it has four powershifts in four ranges that give a total of 16 gears.

Shifts are performed by MF’s trademark T-lever, which has a button on the side for initiating range changes without needing to manually activate the clutch.

As our test model came loaded with almost all the optional extras, it was fitted with an auto-shifting function that takes care of powershift changes.

It’s a fairly straightforward affair, with an economy mode that performs shifts at 1,500rpm and a power setting that waits until revs climb to 2,000rpm.

It’s a bit of an expensive luxury for a tractor of this spec, so we’d probably leave that one off the options list. During general driving, we didn’t tend to use it anyway.

A brake-to-neutral system is also standard fitment, which means there’s no need to use the clutch to come to a stop.

The only other setting is the ability to select starting gears, which, like all MF tractors with Dyna transmissions, is performed by simultaneously moving the Power Control lever and T-shifter with the clutch depressed.

One notable change in the driveline is a switch from Carraro to Dana axles.

However, these still have a hydraulic diff-lock in the front axle rather than a limited-slip unit. MF likes to point this out as it means there’s less scrubbing of front tyres when performing tight turns on concrete and it gives true four-wheel drive in the field.

All M models use an open-centre hydraulic system with two gear pumps – one providing oil for the steering, brakes, diff-lock, pto and four-wheel drive system, and one supplying the spool valves and rear linkage.

However, tractors fitted with the optional combined-flow arrangement have a third pump that can send 100 litres/min to the spool valves.

This is primarily designed for loader work and it makes a marked improvement to cycle times.

Teamed with an MF-branded FL.4121 loader (built by Alo/Quicke), we were suitably impressed by its power and speed of operation on mucking-out duties. 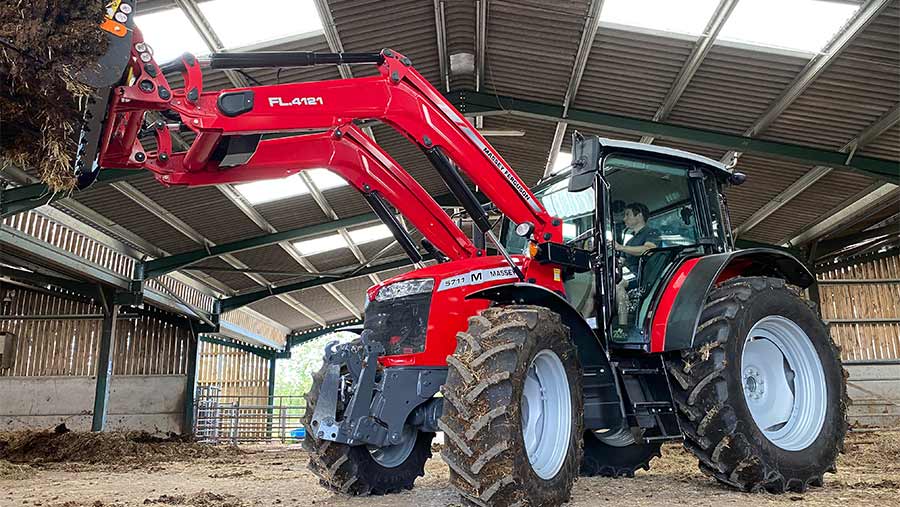 Plus, the tractor’s decent turning circle meant it was fairly easy to manoeuvre in the tight building we were working in.

The fact that MF and Alo have been working together for years also means the integration of the cable-operated joystick is slicker than some. 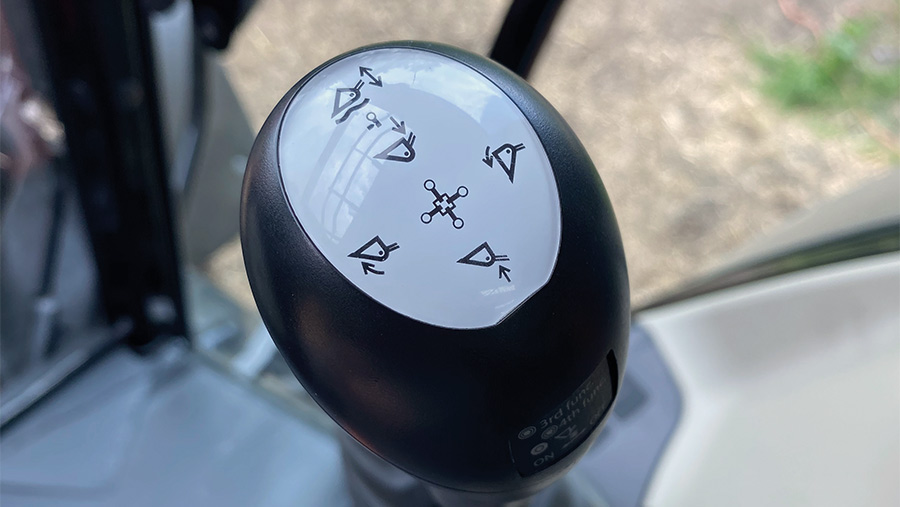 However, one of the reasons for the impressive loader performance is that the FL.4121 is bigger than would typically be specced on the M.

Moving to the back end, the 5711M has a Cat 2 linkage that’s capable of lifting 4.3t and there are two spool valves as standard, with the option of upgrading to three.

The two larger M models have Cat 3 linkages and can lift 5.2t.

One new feature is a factory-fitted, free-flow return to the back end, which was formerly retrofit only.

Electro-hydraulic pto engagement is standard with 540 and 540e speeds, and there’s the option to add 1,000rpm.

The M’s six-pillar cab is the same simple workspace that was used on the Global Series models.

It’s perfectly adequate for a loader tractor of this size and visibility is pretty good all round. 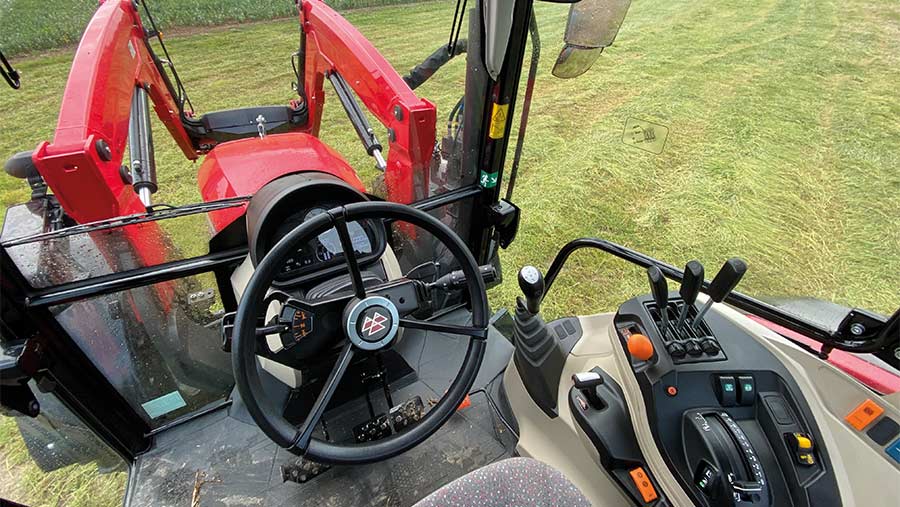 The fact the M doesn’t have the S series sloping bonnet didn’t hamper views to the loader as much as we thought, either.

Our test tractor also came with the optional Visio roof window, which does make it easier to see the loader carriage when it’s at full height.

However, it’s amazing how often we ended up working with the loader bang in line with the strengthening bar between it and the windscreen. 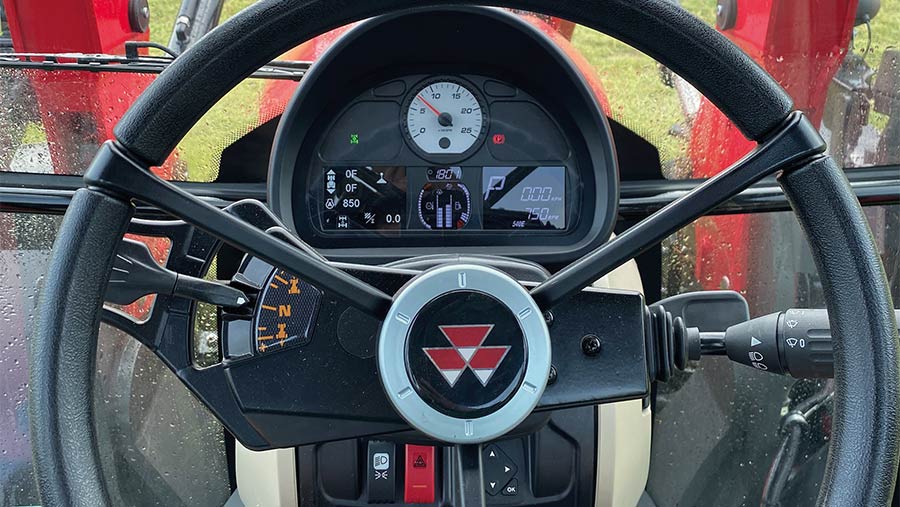 Most of the controls are grouped neatly on the right-hand console, the layout is clear and access to the cab is generous.

However, the passenger seat does make it a bit tight to shuffle between it and the steering column.

When it’s fitted with the Dyna-4 transmission and a few nice-to-have extras, the M-series feels like a very different beast to basic models with a 12×12 transmission.

It’s smooth to drive, has all the features a loader tractor needs, and the cabin is perfectly good, too.

But sadly, there are no bargains to be had here – go anywhere near the options list and the M soon starts to overlap with an entry-level S.

Base-spec models still represent good value for money, but unless there are attractive discounts, the higher end struggles to compete with its premium equivalent.