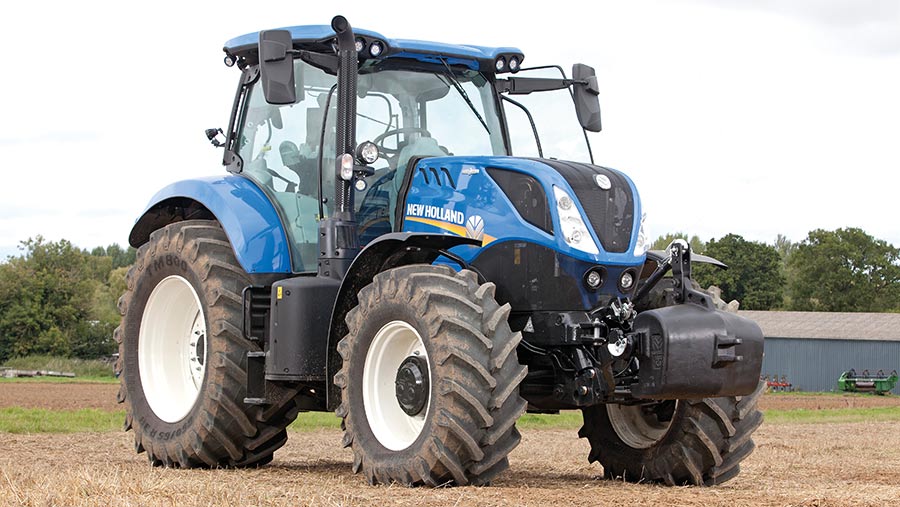 It’s easy to see why the New Holland T7.210 has found favour with those yearning for uncomplicated horsepower – the FPT engine has always been a solid performer, the CVT gearbox is simple to operate and the controls are unfussy.

The downside to this is that the screen has limited functions and the cab in which it sits is really starting to show its age. On the other hand, buyers happy to forego the best creature comforts can potentially bag a lot of tractor for their money.

Watch the video of the T7.210 on test and read the full report below.

New Holland’s T7 cab is identical to that of the T6 and some T5 models. Though the company isn’t alone in using the same frame across different ranges, it doesn’t rid the higher spec models of the superfluous switchgear essential on smaller, simpler machines.

The buttons lined along the top of the dashboard are a good example. They’re used to set up tractors without an Intelliview monitor, so are pretty pointless on posh T7s. Keeping them in place may simplify production, but it cheapens the tractor’s appearance.

The cab itself is a reasonable size, although the chunky pillars, low roof line and big screen that protrudes clumsily from the armrest contribute to a slightly dingy feel.

Views to the front wheels are good because the cab is positioned closer to the middle of the tractor than the John Deere, but this means the operator has to stretch a long way over the back of the seat to get any sight of the pick-up hitch and link arms.

Furnishings are dated, but the hard-touch plastics are generally functional and should stand the test of time; the exception being an awkward-to-slide roof visor that feels especially cheap.

The cab sits on NH’s Comfort Ride suspension system, which is manually adjustable between three settings – unlike Deere’s which can be altered in the screen. Engine noise seemed surprisingly well deadened compared with the near-identical tractor we tested last year.

New Holland’s 10.4in Intelliview 4 is the firm’s latest touchscreen and is used across the line-up, so most CNH users will be familiar with its layout.

Its functions are limited to guidance, Isobus and work monitors and there’s no disguising its limitations compared with John Deere’s Command Center.

However, finding your way around is straightforward and setting up run screens – which essentially show any combination of performance stats, including fuel use, area metre and engine load – is actually much easier than some of the competition.

There are six tabs in total, each one capable of displaying up to 12 detailed work readouts.

They can also be used to control Isobus implements and view GPS maps but, sadly, there isn’t the option to split the screen, so anyone wanting to see two of these things at once will have to toggle between the tabs. 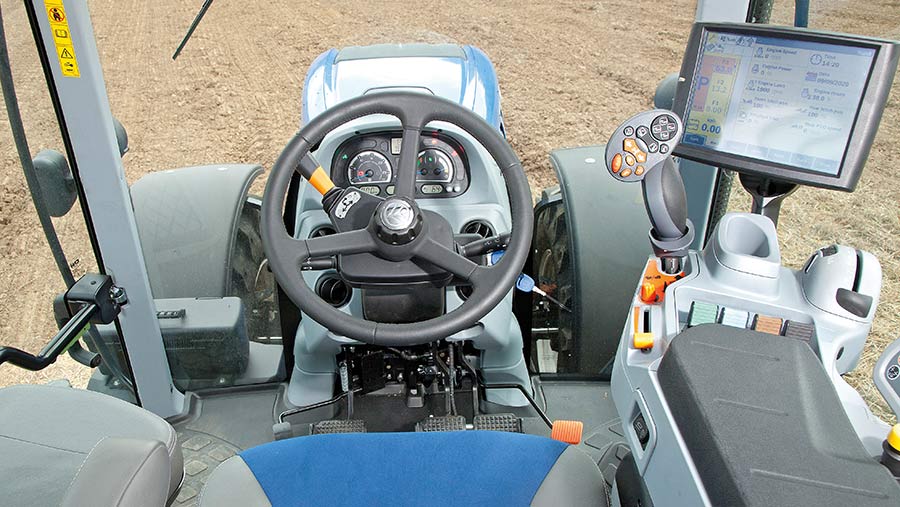 Unlike powershift models that use a rigid joystick, New Holland’s Auto Command version moves back and forth to control speed in the direction of travel. It can work in conjunction with the pedal and returns to centre after every movement.

It might not fall to hand as ergonomically as some of the others and lacks the option of assigning functions to particular controls, but the upshot is that most tractor drivers will be able to climb in and drive without any sort of tutorial.

We liked the unfussy layout – controls are clearly labelled (the beauty of not having assignable buttons) and the addition of a scroll wheel makes setting target and cruise speeds effortless.

However, one major downside is that the cruise is both engaged and disengaged on the button – there’s no possibility of throttling up on the pedal to kick it out.

Elsewhere, four chunky, coloured paddles are still used for the spools, and most other things are dealt with via a bank of buttons within the silhouette of a tractor on the far side of the armrest, which keeps clutter to a minimum.

It is likely that the recent cab redesign on the larger T8 and Case-IH Magnums will filter down the ranges in the next few years. This may well include a digital-style dashboard, updated screen and a slicker armrest layout.

A 6.7-litre, six-cylinder FPT engine is used throughout the T7 range and this has a decent reputation for reliability. It is kept clean by a combination of SCR and DOC, without the need to integrate a recirculation valve (EGR) to meet Stage 5 targets. This will help keep service costs down and avoids too many unnecessary engine-related complexities.

However, the lack of EGR means it gets through a fair bit of AdBlue (New Holland reckons around 7-10% of diesel used), evidenced by its big 56-litre tank – three times the size of the Deere’s.

As with all New Hollands, the figure on the side of the bonnet cheekily relates to boosted output, with an extra 30hp made available for high-speed haulage and pto jobs. It’s actually rated to 165hp, though it was still more than ample for our five-furrow Lemken and six-furrow KV ploughs.

A rev limiter dial near the base of the joystick allows operators to wind the engine down, saving it from revving flat out and drinking more juice than necessary.

It’s far less sophisticated than Fendt’s TMS setup – or those of the other test tractors, for that matter – but it works perfectly well both in the field and on the road.

It also gives the operator a bit more direct input into performance than adjusting droop settings and leaving the tractor to work out the rest, and it’s easy to quickly find a sweet spot between desired forward speed and engine revs.

For those that favour simplicity, it saves entering the screen to fiddle with the settings.

The fact that it’s close to hand means it’s always worth adjusting. As well as reducing noise, we often managed to get spot-rate fuel consumption on easy-going patches of land to just over 23 litres/hour – pretty respectable for a six-cylinder tractor on ploughing duty.

It’s also worth remembering to dial it back on the road, otherwise the tractor will just sit at full chat when it can actually reach 50kph at a very sedate 1,550rpm.

The Auto Command transmission is designed and built by CNH at its factory in Antwerp, Belgium.

It’s different to the version fitted in the long-wheelbase T7 models in that it has two, rather than four, points of 100% mechanical drive. Dubbed a 2×1 gearbox, its modest size means it can be slotted into the smaller wheelbase of the T6 range.

The points of full mechanical power come at 6kph and 34kph going forward and 8kph in reverse, and automatic shifting between the two ranges is controlled by a double-clutch system.

It’s also possible to lock the transmission in one of the two ranges, which can sometimes help reduce power losses on heavy cultivation work.

There are four driving modes – auto, cruise, manual and pto – to suit the job in hand and the operator’s driving style.

Setting it up in the cab is pretty straightforward using three virtual speed limiters, which are displayed on the left side of the screen. Hare and tortoise buttons on the joystick are used to flick between them, determining how fast the tractor is able to drive.

The transmission also includes a handy hill stop feature, which prevents any rolling back when pulling away, and an Intelligent Trailer Braking system.

This estimates the deceleration force by matching the target speed to the actual speed when the operator starts to slow down using the joystick or the pedal.

It works by processing information from the flywheel torque sensor, engine control unit and torque input from the transmission, adjusting the air brake pressure to avoid the trailer pushing the tractor along.

There is also an electronic actuator on the park brake that will engage after 35secs or when the operator leaves the seat. 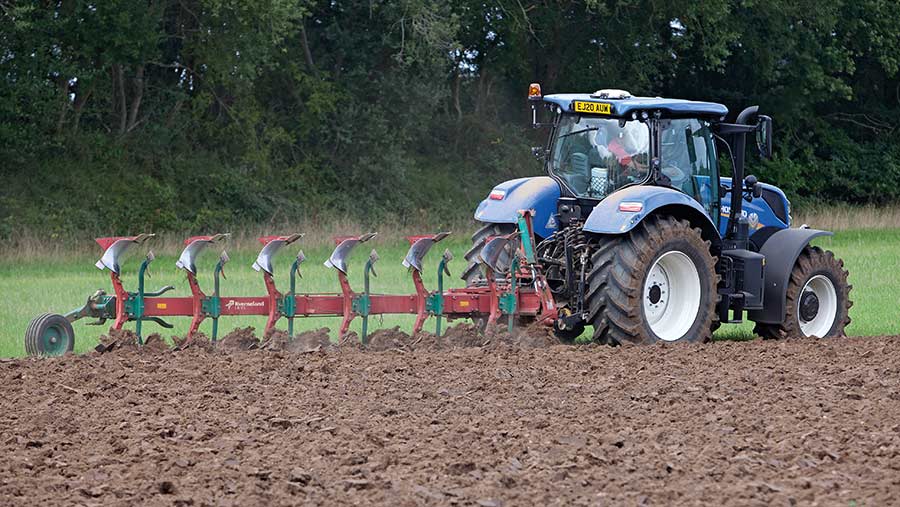 The rear spool layout sees four services split either side of the top link, which means traipsing around the implement to the offside of the tractor to get a good purchase on the hose. The hydraulic trailer brake connection is positioned below the spools and is also a faff to get to.

There are no pressure release levers on the hydraulic outlets, either – something we reckon should be a standard fitment on all tractors.

Both the optional front linkage, which comes with a 3,673kg lift, and pick-up hitch occupy rear spools when plumbed in, so throwing a hydraulic top link into the mix as well might leave the tractor seriously lacking in hydraulic outlets to power implements. It’s also worth bearing in mind that mid-mounted valves are a £1,263 option.

However, it has a generous 8,257kg rear lift capacity and its long wheelbase means it feels more stable than the smaller-framed tractors when lifting close to its limit.

In the cab, the simple slug-shaped linkage controller provides unfussy depth adjustment, but it’s missing a decent detent that would be useful in providing the operator with a clear reference for returning to the same position.

The up/down buttons for headland turns and draft control are also straightforward and don’t need to be unlocked at start-up, unlike the Claas.

The headland turn sequence can be recorded during a turn and tweaked during subsequent bouts, or entered directly into the screen. A button on the joystick activates it, but the system isn’t quite as polished at those of Deere and Fendt.

Fender controls are on the side rather than the rear, so although they’re still handy it is a stretch to reach for the button when holding the arms in position to line up with the link balls.

New Holland has a decent track record in the 160hp sector, notably with the TM155 – now a sought-after modern classic – and then the T6080.

The eight-model T7 line-up was introduced in 2015 and the short wheelbase (2,789mm) versions run from the T7.175 to the T7.225, which is the best-selling tractor in the range despite only coming with a stepless gearbox. All are available in the Classic or plusher Sidewinder II spec.

The bottom of the range overlaps with the T6 machines, so the T7.175 has never been a big seller. Buyers in that bracket tend to opt for the T6 versions that offer the same power in a smaller package.

Surprisingly, only 25% of T7.210s are sold with a top spec Auto Command CVT, so the lion’s share of sales is split between the Power Command 19-speed full powershift or Range Command semi-powershift transmission.