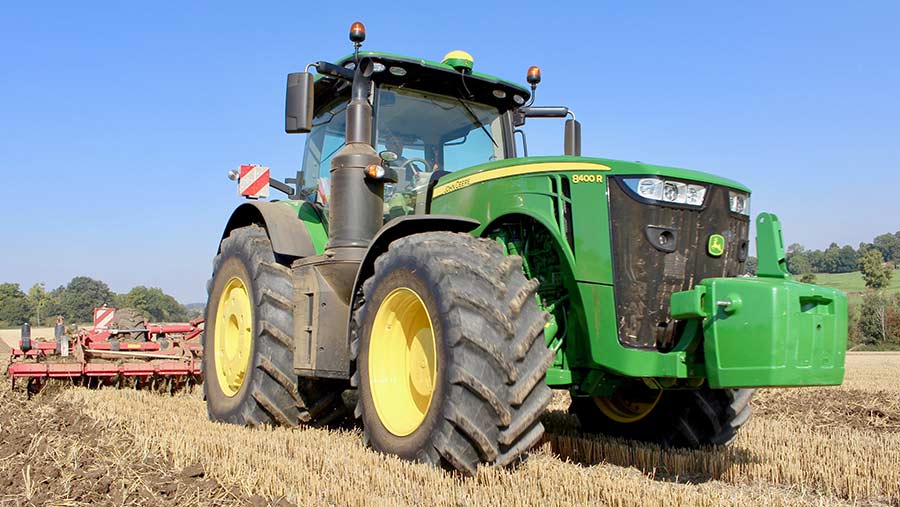 Over the past couple of decades, tracked tractors have established themselves as the go-to cultivations power source for many 500ha-plus arable growers, thanks to their ability to skip lightly across wet ground, get the power to floor and breeze over ploughed land as if it were on level stubbles.

But it seems that high-horsepower tractors with wheels are now firmly back on the menu due to huge investments by tyre companies in flexible sidewall technology that has grown footprints and reduced wear.

Tyres can run effectively at lower pressures than ever before to reduce compaction, have increased speed limits and improved carrying capacities. There are also huge financial savings by not opting for tracks, so it’s no surprise that farmers are keen to reignite the tracks versus tyres debate.

With that in mind, we thought it was time to get to grips with John Deere’s 8400R running Trelleborg IF footware and with a 6m Horsch Terrano MT cultivator for company.

Although the Farmers Weekly machinery team is pretty handy at the wheel of a tractor, there’s nothing like first-hand experience, especially with 400hp under the hood. So we also enlisted the help of Will Streeter, a partner at TS Arable – a 2,005ha joint-venture contracting operation on the Essex/Hertfordshire border. 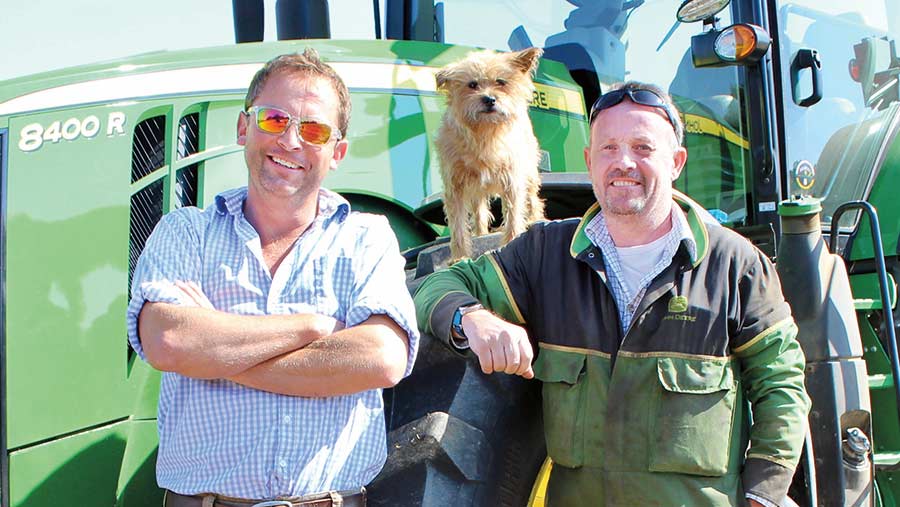 Will Streeter and Dave Mugele

Alongside Mr Streeter was Dave Mugele, one of the company’s four full-time employees who operates TS Arable’s JD 8370RT and has driven crawlers for 12 years. They both helped us assess the 8400R and provided some direct comparisons to the tracklayers.

The full 8R range is powered by Deere’s 9-litre, six-cylinder PowerTech engine, which can be wound up to achieve 450hp when used with Intelligent Power Management (IPM), which adds 35hp running at 1,900rpm. Maximum torque of 1,806Nm is available at 1,600rpm.

Along with most of JD’s range, the smaller blue filler cap on the side means it’ll need a regular dose of AdBlue to comply with the latest round of emissions. And, with a capacity of just 23 litres, it will need a top up most days.

It’s a similar story with the stingy-sounding 675-litre diesel tank. With the tractor running at full tilt we got through 75 litres an hour, so refuelling every nine hours during heavy cultivations means a full day’s work isn’t possible from a brimmed tank.

“However, it’s a trade-off, as the extra 30hp on the 8400R meant we managed to pull our 6m Horsch Terrano at a constant 12kph, whereas the RT averages closer to 10kph – so we can cover more land per day,” says Mr Streeter. 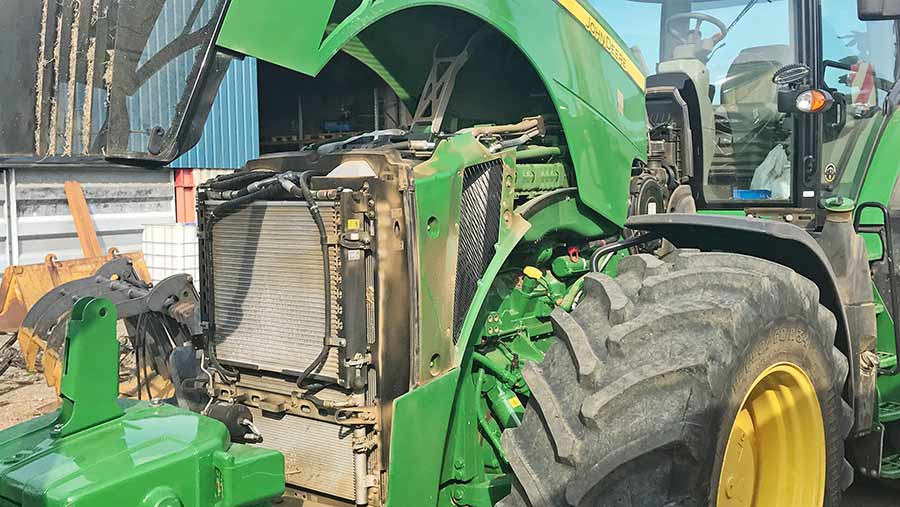 With 400 ponies up top, Deere has decided that there’s only one transmission that fits the bill – its fully-mechanical E23 powershift, which has 23 equally-spaced forward gears and 14 in reverse. That’s where it differs to most of its rivals, which all offer a CVT option (see below for a few more details).

There are three gearbox modes – full auto, manual and custom – and for the most part we left it to its own devices in auto. Once the set speed of 12kph is engaged, the tractor manages the gear and throttle to maintain forward speed. However, Deere says for maximum control over the gearbox it’s best to tweak the custom settings, which allows more detailed alterations such as engine droop and minimum rpm.

We found that compacted spring bean tramlines increased wheel slip beyond 15%, which encouraged the tractor to drop a cog and crawl through the tough area without us having to touch the stick or dab the throttle.

However, both drivers found the tractor returned to neutral or stalled occasionally when pulling when the cultivator was backed into corners as the start gear was not low enough. This where operators running a CVT box will benefit, as the transmission is able to react more quickly to the strain.

In response, Deere suggests that it’s best to keep the starting gear low for headland bouts where the cultivator is in the ground from a standing start. 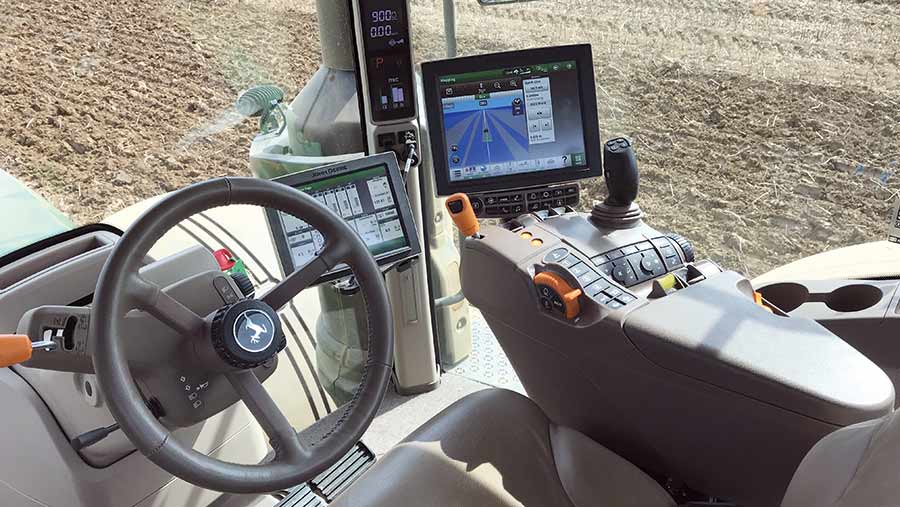 The interior is pretty similar to any standard 8R tractor, with the Command View III cab offering plenty of room and a decent high-seated view to the implement.

Inside the screen there are functions such as ITEC auto-learn, which monitors the functions used (mainly during headland turns) during the first six bouts and then asks if the settings it has learnt should be imported. These are still adjustable, but means there’s no need to spend 10mins inputting the initial sequence you think you want.

“While engaging ITEC to lift the machine out of work, we noticed a slight whine coming from the hydraulic circuit, which felt like it was straining and something that doesn’t happen on the RT,” says Mr Mugele.

“We also preferred the older layout with the ITEC buttons on rocker switches. Call me old-fashioned, but it saves looking down to check you’re pressing the right button. They are now dotted in a single row, so there isn’t much to distinguish between them without a quick glance.”

One addition that we’d like to see is the auto-steer activation included in the ITEC sequence, but for safety reasons this isn’t possible, says Deere.

The other obvious shortcoming is the lack of a decent sized tool box to put a selection of points and wings in, along with enough tools to keep you going in the field.

Even at 6.1m long without the front weight, the big Deere is surprisingly manoeuvrable in the smaller fields and we could tuck neatly into corners or even spin on a sixpence to cultivate the next run. One of the handier additions is the steering sensitivity adjustments, which can be altered to go from lock to lock in just over three turns of the wheel.

In work, the biggest difference compared with the crawler is that the wheeled machine pulls around the headland curves like a train, gripping and crawling through the tough stuff. In comparison, the RT has a habit of spinning one track when turning, as most of the power is directed to its neighbour.

One thing that did help pulling away was the little increase in revs after first hitting the ITEC button, which helps the tractor accept the draw from the cultivator and gets it up to speed quickly.

On the road, the 8400 also doesn’t feel as gigantic as you might think. It felt manageable when winding down some Essex country lanes the tractor felt fairly manoeuvrable and is able to squeeze past other vehicles without too much of a hitch.

“On the road, the wheels win hands down – some of our fields are 20 miles apart and it saves a lot of bouncing and jolting around in the seat that we find with tracks,” says Mr Mugele. 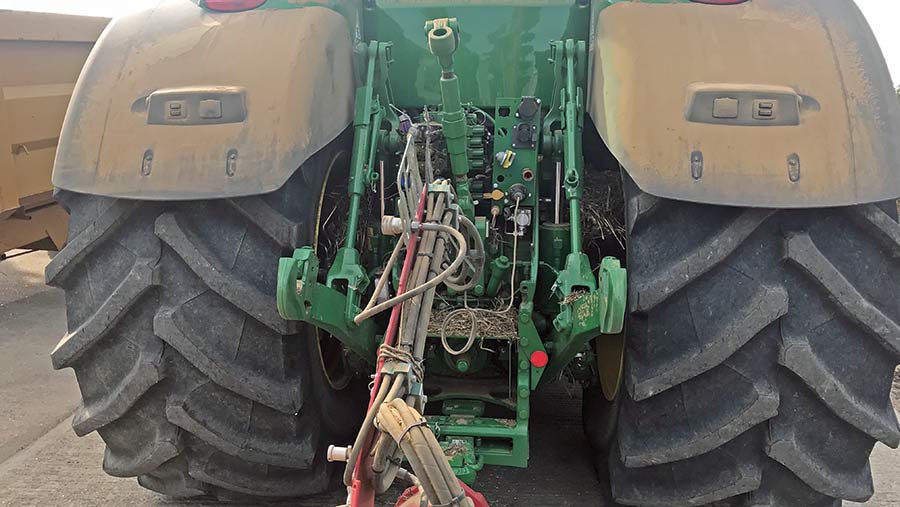 The mechanical e23 gearbox is perfectly suited to cultivating. Once its settings are tweaked to suit the job it’s a good match for the 9-litre engine and pulls hard around headlands, never giving up.

We’d worry that the smaller-than-usual fuel tank would limit daily outputs, but there’s no doubt that it’s more than a match for its tracked counterpart.

All prices taken from Farmers Weekly’s 2018 buyers’ guide and are subject to change.