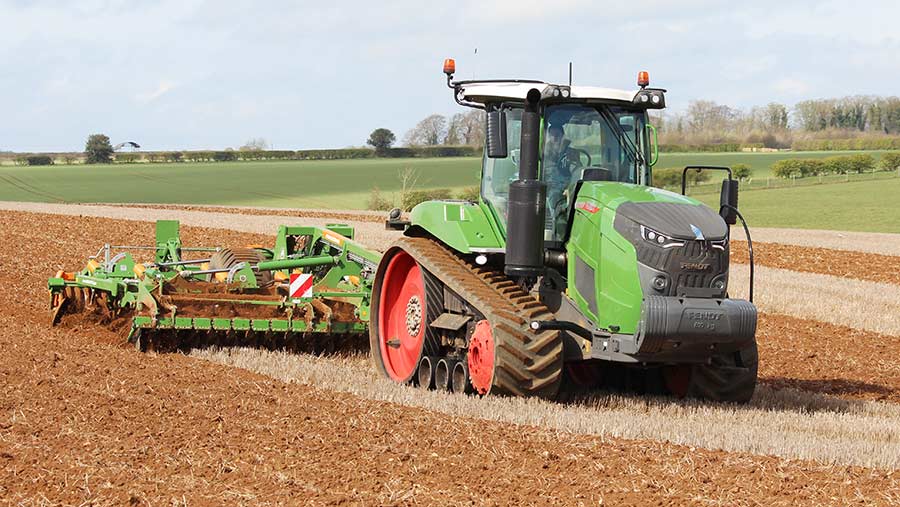 Agco has breathed new life into its flailing twin-track fleet with a major rebranding and upgrading exercise for the long-in-the-tooth Challenger tractors.

And the firm’s prairie monster range needed some pretty extreme CPR to reverse a couple of years of dwindling sales, caused by major engine failures and product recalls for dozens of UK-sold E-series machines.

The troubles saw Challenger sales tumble from 100 during its peak year of 2012 to just 70 by the time the brand had been mothballed in Europe.

Fendt, which has undoubtedly become Agco’s European priority, has targeted selling 50 in the UK this year as it relaunches the twin-tracker in a market that contains just two players – the other being John Deere’s RT-series.

Of course, rivals also come in other shapes and sizes – four-track units such as the Case Quadtrac and Fendt’s own wheeled 1000-series, to name just two.

To aid its bid for success, there have been several major tweaks to the time-proven, but tired, Challenger units that had remained largely unchanged since 2008. 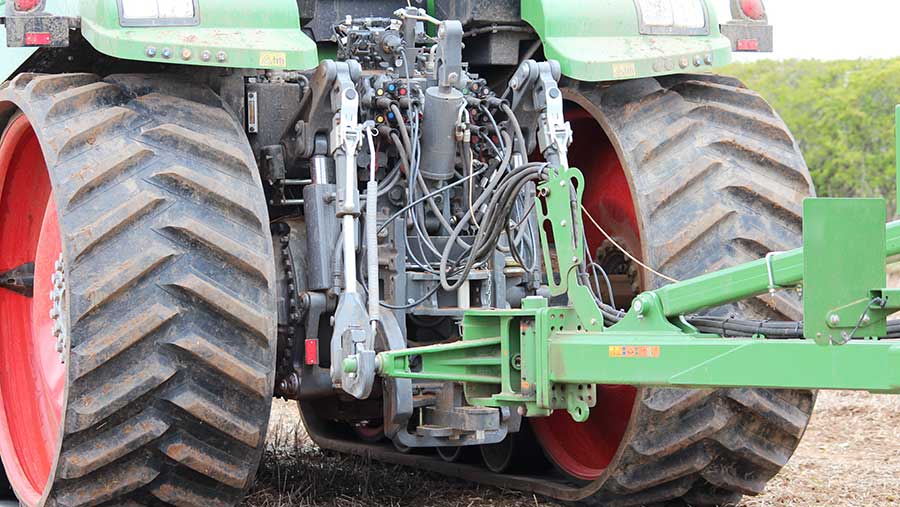 Most of these target the Challenger’s weaknesses – a back-jarring lack of suspension, a crude cab and some pretty archaic controls (by Fendt standards, at least).

The engine has also been addressed, with a thicker casing to improve longevity, a more efficient cooling package and some tweaks to the piston design.

The update has been a joint project between the tracklayer specialists working in Challenger’s home of Jackson, Minnesota, and the Fendt boffins in Marktoberdorf, Germany.

The green machines employ the same twin-turboed Agco Power engine as before, but its seven cylinders now operate in a more controlled manner.

Engine idle comes at a sedate 800rpm, and its relationship with the new stepless transmission sees it make every effort to keep revs low during work.

Ditching the old powershift gearbox may have signalled the end of simple, mechanical power, but it means the motor no longer has to cope with peak stresses and pressures, either.

The thickness of the engine’s casing has been doubled too, so should help improve longevity. 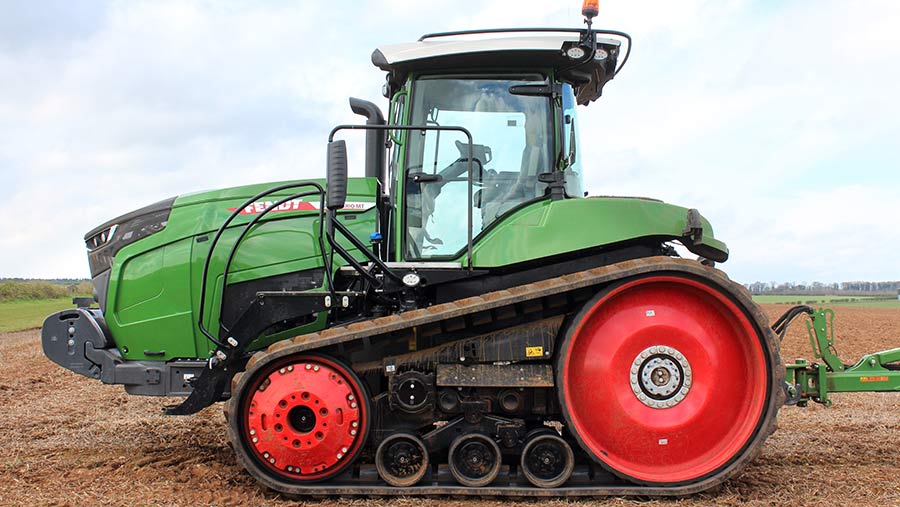 The other stand-out change is in the cooling department, where it now runs the same hydraulically driven system as the 1000-series.

It sees the front fan tilted upwards to avoid sucking in too much stubble debris, and forces pressurised air through a sealed framework to the cooling package.

Operating an oil-powered set-up means it is driven independently of engine speed, so can be slowed down when maximum cooling is not required. Fendt says this has made it considerably quieter than before.

The engine currently meets Stage 4 emissions regulations, but Agritechnica will see a Stage 5 version launched. This will combine a DPF with the existing EGR, SCR and DOC arrangement.

It’s out with the old American-style powershifter and in with the 1000-series’ slick TA 300T Vario outfit.

The single-range stepless set-up is largely the same as Fendt’s flagship wheeled machines, albeit with an adapted final drive and differential steering system.

Undoubtedly, this has cut engine bark and results in a much smoother drive under load, although whiny hydraulics do get tiresome in the cab.

Two hydrostatic motors take power through a single output shaft to the drive wheels (via a series of gears).

The default position with the steering wheel left alone is a straight-line pull, so there is no need for a specific diff-lock switch.

Above 20kph, when all-out power isn’t required, the second of those hydrostatic drives is decoupled.

We had no qualms about its performance in the field, though the 6m Amazone Ceus cultivator was easy work in the light land south of Lincoln, even when working down to 30cm and with the cruise control set at 13kph.

Our setup carried 28 57kg weights (1,596kg) on the idler wheels, plus 1,690kg on the front to balance things up, but stiffer ground will require a different arrangement of ballast to keep all of the track in contact with terra firma.

There’s no longer the option of fitting mid-weights to the undercarriage, though it may be possible in the future if/when power outputs rise and the weight-to-horsepower ratio is deemed inadequate.

Ride quality and comfort has long been a bugbear for twin-track owners, and Caterpillar machines in particular.

Devoid of cab suspension, with a poor mid-wheel arrangement and no tyre softness to take the edge off of bumps and ruts, operators have been demanding refinements for many years.

Fendt reckons its running gear redesign has finally answered their prayers, drastically improving things by altering the layout of the suspended mid-wheels in the triple-pivot arrangement to avoid spine-tingling bumps fizzing through the driver’s seat. 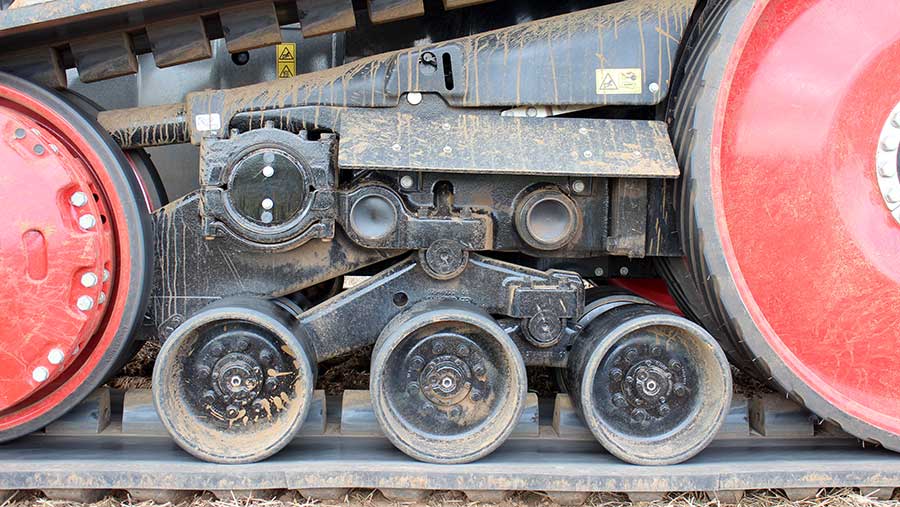 The front idler wheel has far more travel, too (up from +/-8cm to +/-20cm), and bigger-diameter, spring-mounted mid-wheels should wear more slowly than before.

There is also a proper suspension setup on the central carrier hard bar. Where previously it sat on fairly stiff rubber blocks with limited cushioning, it now has a maintenance-free coil and damper assembly with 260mm of travel.

Our early impressions were that it worked very well and helps the undercarriage stay on the ground, even if the nose pitches.

The wheelbase is longer too (by 127mm, to be precise), delivering a larger contact area for the Camso tracks.

Fendt suggests it’s reasonable to expect 3,500 hours from the rubber on light, stoney land and 6,000 from the plastic mid-wheels and idlers, so buyers will have to factor in the £15,466 it costs for a replacement pair.

The suspension upgrades continue under the cab, where there is a new cushioning arrangement that uses coil springs with shock absorbers.

There is no option for air suspension, though, mainly because most tracked machines leave the factory without an on-board compressor.

The cockpit remains a four-post affair, but has been kitted out with Fendt’s proven interior and a neat pivoting and telescoping steering column, controlled on a single pedal. 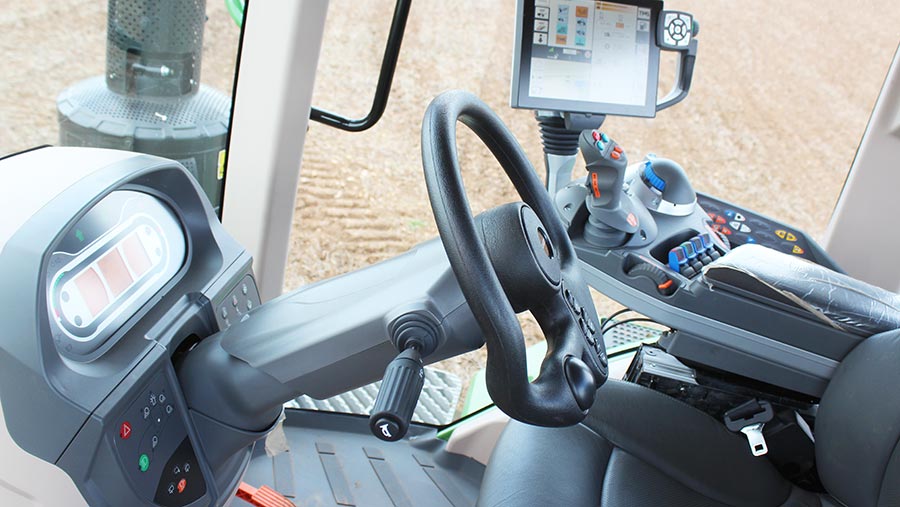 Gone is the old button-controlled monitor – replaced by a 10.4in touchscreen terminal – and the Germans’ armrest controls will seem like a home from home for anyone with previous Fendt experience.

The upgrade might come as a bit of a shock to old-schoolers who enjoy the simplicity of heavy tillage tractors, but the setup is easy to navigate once you know how and is auto-steer ready, too – a necessity for fieldwork to avoid scuffing soil in tight turns.

The only obvious difference is the joystick, which is much simpler than on smaller Fendt tractors. Rather than having a stack of programmable features, it carries just cruise speeds/engine rev memory and headland management controls.

It can also deal with travel direction and speed in the same way as the firm’s regular joysticks. 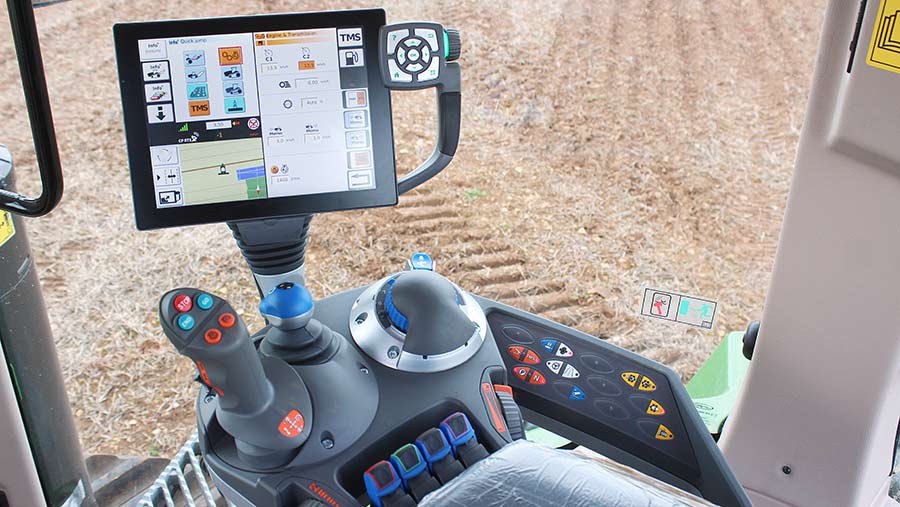 Air conditioning has been improved as well, says Fendt. Previously, the unit was located at the bottom of the cab, but this left it too close to hot transmission and hydraulic components. Its performance garnered plenty of complaints, so it has been relocated to the roof – safe from any interference.

Fendt is trying its best to get its money’s worth from the 1000-series development process, having also repurposed its back-end for twin-track responsibilities.

For Challenger drivers doing power-harrowing or other pto-driven work, the big difference comes in the form of an eco setting for the 1,000-speed pto.

While before the engine had to scream and guzzle at 1,980rpm to maintain speed, the two gear sets on the drive mean it will work at 1,650rpm for full power or 1,250rpm in eco. The upshot is quieter work and lower fuel consumption.

There’s also a take-out hydraulic volume of 100 litres, which should be ample to run big seeding rigs with several metering systems.

The MT remains a specialist bit of kit only called into duty for a small portion of the year, so UK demand will always be limited.

Improvements to the suspension and cab have most certainly made life in the seat more comfortable, but those upgrades have come at a price.

To try to manage finance and repair costs, many buyers will look closely at the eight-year warranty option that, although expensive, keeps budgeting simple.

If you want this kind of horsepower in a more adaptable package, it makes sense to look at the wheeled 1000-series that stretches to 500hp. It is a similar weight, but is faster and much better on the road.

There are also question marks over second-hand values, with the big markets of eastern Europe traditionally preferring simpler powershifters, particularly given the distance that many of them work from main dealers.

Many farmers will be sad to see the end of an iconic high-horsepower brand in Europe, but as Agco’s worst-selling family member, its crown jewels have been passed to the blue-eyed boy of the firm’s ag machinery portfolio – Fendt.

Challenger crawlers and sprayers will now be dressed in Fendt livery and we can expect the Germans to gradually bring the machinery in line with the rest of its ranges.

However, Challenger will live on in the Americas and Australia, where there remains huge demand for its kit.

Initial endeavours were focused on getting the smallest twin-tracks up to speed, but Fendt’s work now surely centres around sourcing a suitably strong stepless transmission to fit in the biggest models in the range.

This is unlikely to be significant in the UK – sales of the big ones rarely exceed 10 in a year – but will be deemed imperative given the firm’s commitment to the Vario drive.

There have also been whispers of articulated tracked machines to compete with the likes of the Case Quadtrac and John Deere 9RX, particularly given Challenger has a wheeled MT-E range that looks ready-made to convert to rubber bands.

But, again, developing a suitable stepless transmission for this will also take considerable work, and the project is unlikely to be deemed a priority.