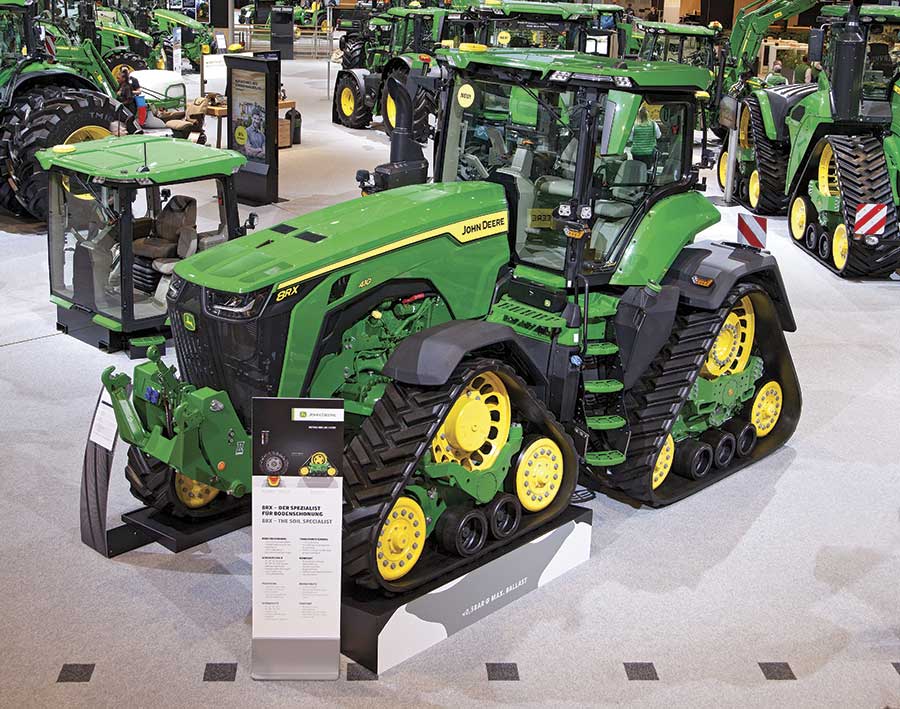 Following a cancelled launch event earlier this year, John Deere had a host of new products at Agritecnica, including the first public glimpse of its new four-track 8RX tractor.

There will be four models available in the 8RX range, all running the same 9-litre Deere engine as the standard 8-series. The four options – 310, 340, 380 and 410 – will all be available with the e23 transmission and all but the flagship 410 with JD’s Autopowr CVT.

Nicknamed the “soil specialist” by Deere, the 8RX’s four tracks exert less than 0.5bar of ground pressure, even when fully ballasted, thanks to a soil contact area of 4.6sq m.

The rear units and suspended mid-roller design have been pinched from its big brother, the 9RX, but the front tracks are brand-new.

These are smaller and connect to the beefed-up front axle at a low pulling point. This helps maintain even weight distribution when under load, as the tracks stay flat on the surface rather than digging in at the rear.

The front axle and steering beam have increased in strength and size, while the front tracks have been designed to tuck under the chassis to improve the turning circle to 10.7m.

Front track suspension is taken care of by a pivoting frame under the main drive wheel. This oscillates by roughly 150mm to smooth out any bumps in the field or on the road.

There’s also a heavily revised four-post, fully suspended cab which is packed with new technology, designed with the help of BMW’s engineers in California. A 6.5in touchscreen now makes connecting a smartphone and playing music much easier, and the armrest gets Deere’s Command Pro joystick.

The seat can now massage, heat and cool, and offers 65deg of swivel. There’s also a six-point surround sound system and a bigger fridge.

A 22-LED light package has 60% extra lumens output than standard 8R models, while the roof has an integrated Greenstar dome and RTK receiver to help reduce thefts.

As a comparison, the twin-track 8370RT Autopowr in FW’s 2019 tractor buyer’s guide was £332,886, and JD still sees a strong market for these, despite the introduction of the 8RX.