For sheer choice and variety, the 150hp bracket marks the tractor sector’s sweet spot, with most makers offering four- and six-cylinder alternatives and a multitude of transmission types and spec levels.

Not long ago they were regarded as prime movers and top-of-the-tree tractors, but expanding farm sizes mean machines of about 150hp are now the meat in the UK tractor sales sandwich.

Agricultural Engineers Association tractor power data shows the average horsepower of new machines sold now lies just above this figure, while a buyers guide browsing session will reveal a bewildering array of makes, models and specifications as manufacturers seek to satisfy the broad range of potential buyers at this level.

Whether you are looking for a flagship five-furrow hauler for a mid-sized family farm, or something to suit a jack-of-all-trades role on a larger enterprise, there is plenty of choice in the market, from full-spec to stripped-back models.

It’s a sector served by most manufacturers, including those that offer alternatives such as systems tractors. It has benefited from the trickle-down of technology, with options such as CVT transmissions that were previously only available on larger machines.

A further level of choice at this particular power level comes as manufacturers now offer four- and six-cylinder alternatives. Turbocharging and intercooling technology has become better proven, reliable and trusted over the past decade or so too.

The compactness of a four-pot is sometimes also preferable to the implement-balancing length of a six-cylinder tractor, so selecting one over the other is arguably the first decision to make when choosing a 150hp tractor.

Then it’s on to transmission type, general level of specification and the detailed bits. Here we summarise just 12 of the alternatives on offer.

As ever, the retail prices provided are only a rough guide to cost, and will depend on your dealer, as well as the selected specifications. It is also wise to ensure you are comparing apples with apples – quoted power ratings can vary between the various 97/68 EC, ECE R 120 or ECE-R24 standards.

Ask your dealer to provide directly comparable figures where possible. We have used maximum rather than rated figures to pick these models, and disregarded power boost figures.

Like many other makers, John Deere offers four-cylinder and six-cylinder alternatives at this power level. 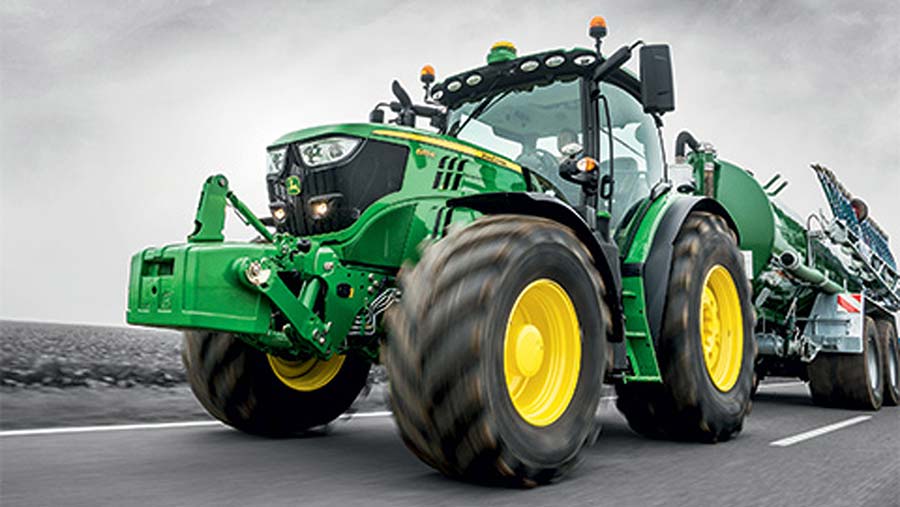 Transmission options range from a 20F/20R PowrQuad Plus manual powershift through to the firm’s AutoQuad Plus/AutoQuad Plus Ecoshift automatic ‘box.

The six-cyl R models can also be had with Deere’s AutoPowr continuously variable ‘box or the semi-automatic DirectDrive double-clutch transmission.

Externally, recent upgrades include improvements to the TLS+ front axle suspension and a maintenance-free mechanical cab suspension for the 6M models – 6R tractors get a hydraulic system.

Case IH has added a six-cylinder model, the 150, to the top of its recently revised line of Maxxum mid-rangers, creating a 150hp alternative to the existing Maxxum 145 four-pot machine of the same power level.

While the 145 is powered by FPT Industrial’s 4.5-litre four-cyl engine, the powerplant in the 150 is a 6.7-litre six-cyl unit from the same sister company. 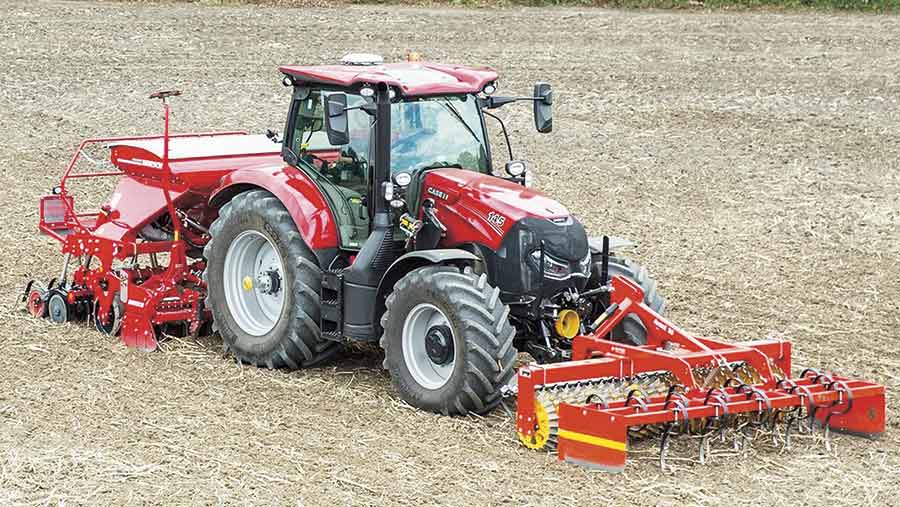 Each is available in X, Multicontroller or CVX format. The first of these, the newest, is a standard-spec version fitted with the ActiveDrive 4 four-range/four-speed semi-powershift transmission and non-configurable mechanical remote valves.

Other features new for 2018 across the range include a fully revised lighting package.

New Holland buyers can choose from the four-cyl T6.175 and six-pot T6.180, which each produce 155hp (ECE R 120). While the former is available in Deluxe and SideWinder II formats, the latter comes only in Deluxe configuration.

Those opting for SideWinder II models with Dynamic Command can choose from two versions of the SideWinder II armrest, depending on whether they want mechanical or electronic hydraulic remote valves.

On tractors with the moveable spec, pulling or pushing the CommandGrip forwards will shift up/down the transmission. Engage reverse flips the logic, so that pulling rearwards upshifts and tapping the stick forwards upshifts. In Ground Speed Management mode, pushing the stick forward accelerates the tractor up to the set target speed, while pulling on it decelerates the machine.

Both offer a maximum output of exactly that figure from their Finnish-made Agco Power engines. Each comes with a three-strong transmission selection – Dyna-4 or Dyna-6 four- or six-speed semi-powershifts, each with four ranges, or a Dyna-VT CVT. 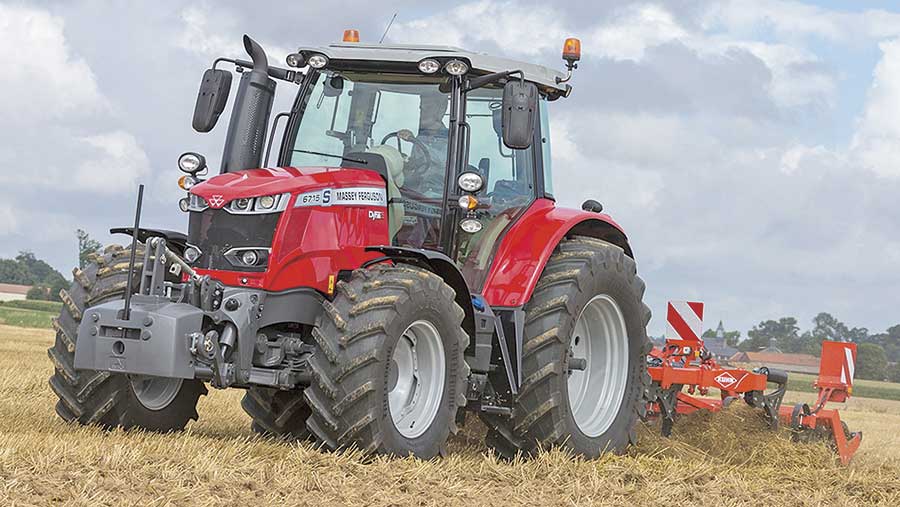 There are also three specification levels for both ranges – Essential, Efficient and Exclusive – and these determine the simplicity of the right-hand control layout. Essential specification (available on Dyna-4 and Dyna 6 tractors) groups the T-bar transmission controller, mechanical spool valve levers and other functions on the right-hand console.

It is also possible to have a full right-hand glass window with this spec. Efficient tractors gain a relatively simple right-hand armrest for controlling functions such as throttle and transmission, while Exclusive models have a more comprehensive armrest from which most major functions can be controlled, and which includes a fixed joystick.

The S-specification introduced at November’s Agritechnica brings with it improvements including a new lighting package and increased gross vehicle weight of, as an example, 11,000kg for the 6715 S Dyna-4. 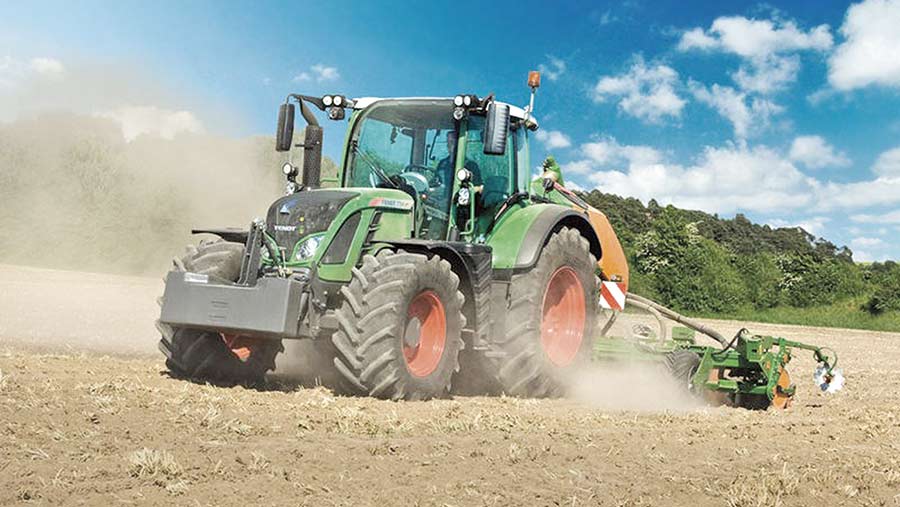 Specifications also vary relatively little, with features such as armrest controls, electronic spool valves and the Variotronic terminal all supplied as part of the standard package, whichever tractor model you choose.

However, there are four spec levels – Power, PowerPlus, Profi and ProfiPlus. Only the top version gets a large 10.4in screen and the addition of VarioDoc documentation recording, with others making do with a 7in unit.

Valtra offers only a four-cyl option at 150hp, in the shape of the 155hp N154e. The little letter means the tractor is one of two in the N-range that is fitted as standard with an “eco” mode. When selected, this allows the machine to achieve greater maximum torque at a lower engine speed. 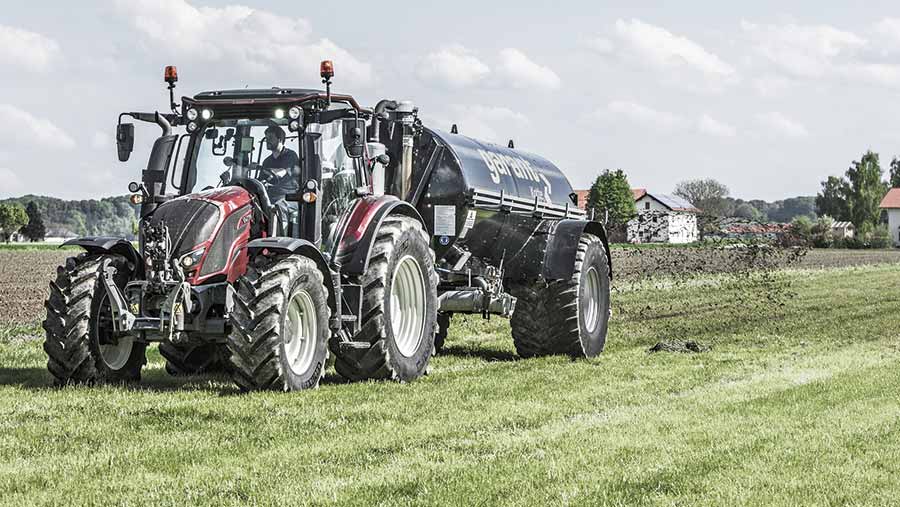 There are four different transmission/spec package options. The first three are all based on a four-range, five-step powershift. HiTech models have this transmission with turbine clutch option, plus open-centre 73- or 90-litre/min hydraulic system and mechanical spools.

Specify Active and you get load-sensing hydraulics with up to 200-litre/min flow and automatic transmission shifting.

Lastly, there is a Direct CVT option, with a similar armrest to the Versu. Beyond all this, Valtra’s Unlimited tailor-made service allows tractors to be configured as the buyer requires, with options including TwinTrac reverse drive. 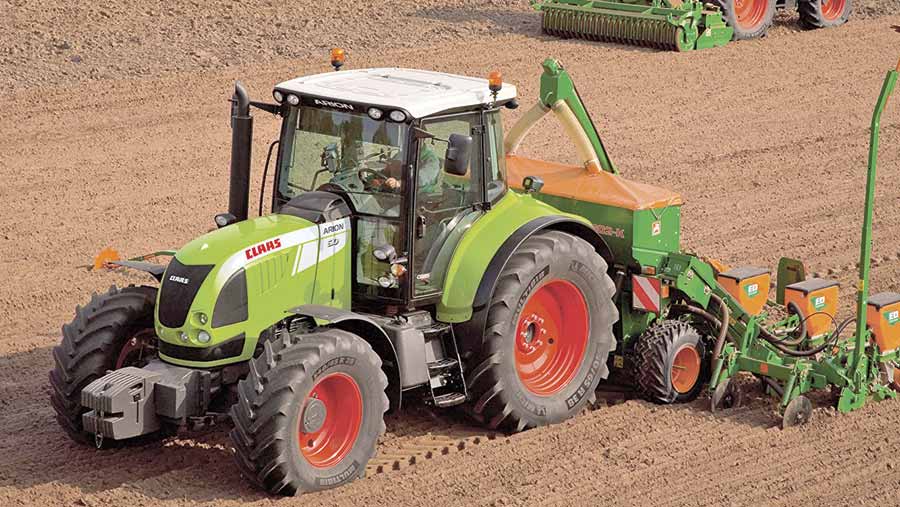 In place of the ordinary CIS pillar display is a 7in screen, which can both provide information and be used to control valve timing and flow rates, headland management sequences and Isobus implements.

There is no shortage of choice from McCormick, and its Landini stablemate, in the 150hp range.

Under the red brand, options start with the 4.5-litre/four-cyl 143hp X6.460, featuring a six-step, three-range Speed Six transmission with synchro-shuttle. 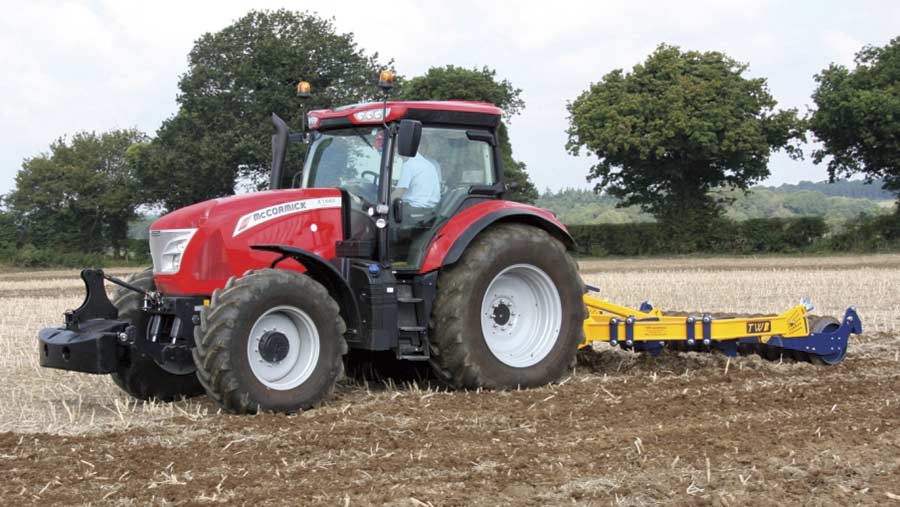 Then comes the X7.440, using the same engine and producing the same power output, but putting it to the wheels through a PS-Drive four-step, six-range semi-powershift or a VT-Drive CVT.

Lastly there’s the X7.650, the brand’s smallest six-cyl tractor, which uses a 6.7-litre/six-cyl engine to produce 160hp, driving through the aforementioned four-step, six-range semi-powershift. All powerplants are sourced from FPT Industrial.

The X6.460’s transmission can be upgraded to include T-Tronic on-the-go shifting, using buttons integrated into the gear lever that triple the number of available gears, providing a total of 54 forward and 18 reverse speeds.

A declutch button on the gear lever and the shuttle control lever adjacent to the steering wheel allow the operator to change gear and shift from forward to reverse without using the clutch pedal. A creep transmission is available as an option for both configurations.

In the Deutz-Fahr line, the primary options at 150hp are the Agrotron 6155.4 and 6155, with four- and six-cyl engines, respectively, each producing a maximum 156hp. Three transmission options are available on each.

Standard fitment is a five-speed gearbox with a six-speed powershift, for a total of 30 forward speeds (15 in reverse). Then comes RCshift, which uses similar internals, but provides automated range changing. Lastly is Deutz-Fahr’s TTV continuously variable transmission. 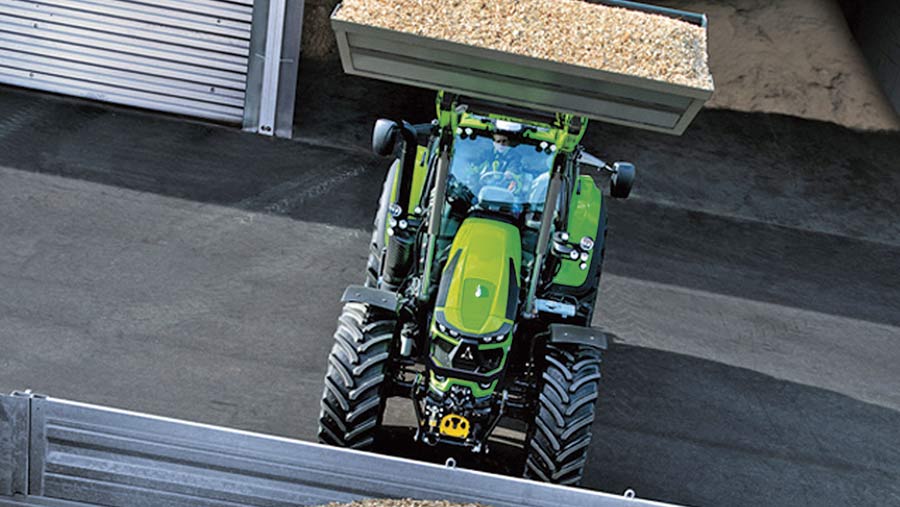 Recent revisions to the six-cyl models in particular have increased reserve torque and torque starting levels and are said to have cut fuel and DEF/AdBlue use, while at the same time improving cooling performance.

There is a new front axle with an improved “intelligent” adaptive suspension system incorporating “anti-dive” technology too, plus a revised MaxiVision cab with InfoCentrePro five-inch colour display for providing information and controlling settings. Buyers also get a new armrest with MaxCom joystick, and a new air conditioning system.

At Agritechnica in November, Kubota revealed the first major update to its M-7-series, the machines that were the maker’s original foray into the market above 130hp.

As a result, the middle model in the manufacturer’s 130-170hp range, the M7-151, has become the M7-152. Power unit and output remains unchanged, though, with a 6.1-litre Kubota-built turbocharged and intercooled four-cylinder motor producing 150hp. Kubota has yet to reveal any plans for a six-cylinder tractor range. 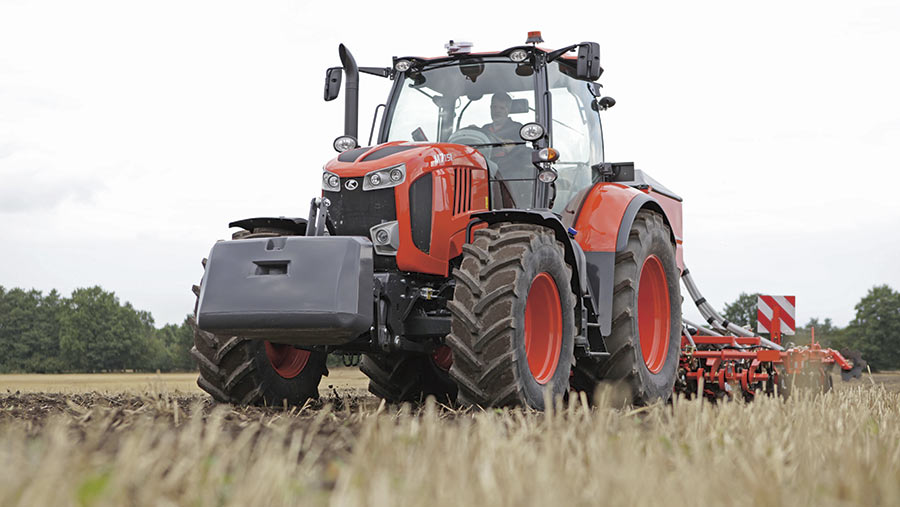 The primary update brought by the “2” suffix is in the transmission department, where a new six-step powershift replaces the previous four-step unit.

It combines with the standard five-speed transmission to create a total of 30 forward and 15 reverse speeds, and can be set for manual or automatic shifting up to a maximum speed set on the tractor’s terminal screen.

There is also an increase in maximum permissible weight to 11,500kg, allowing for a higher payload, and an upgrade in maximum possible tyre sizes to 710/60 R38 rears and 600/60 R28 fronts.

Zetor now offers both the four-cyl Forterra 150 HD and six-cyl Crystal 150 at 150hp. As you might expect, you won’t find a CVT option or a touchscreen terminal in these cabs, and the options list is relatively short, but not everyone needs all the bells and whistles, even at the heady heights of this power level. 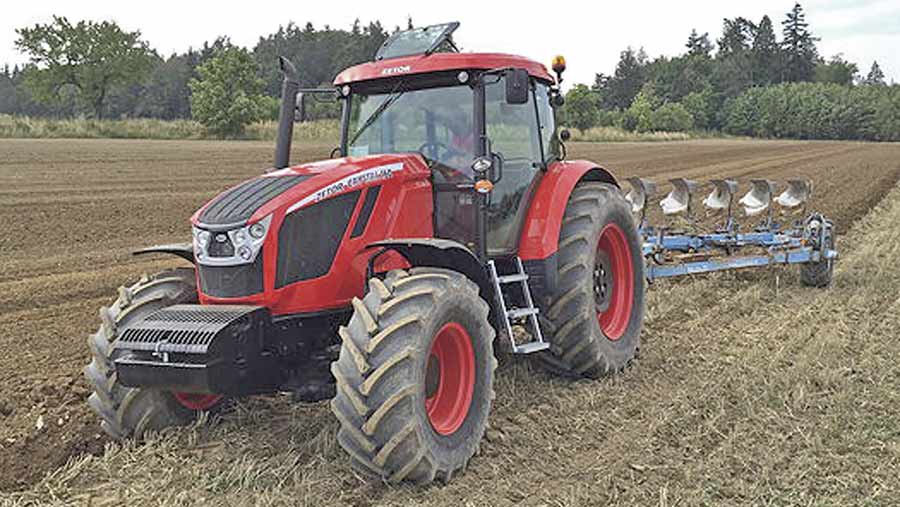 Standard specification on the Crystal includes a Deutz six-cyl engine displacing 6.1 litres, while the Forterra features Zetor’s own four-potter.

Transmission choice is as straightforward as the unit itself – there is just the one. The tractors both drive through a two-range, five-speed synchromesh transmission made in house by Zetor. It incorporates a three-step semi-powershift and hydraulic synchro-shuttle. There is also a PowerClutch disengage button on the main gear lever.

A Bosch Hitchtronic electronic system governs rear linkage operation, providing automatic draft control, but spool valves are mechanical only. Both cab and front axle benefit from mechanical damping. There is one standard spec level, and the cab comes from that already established on the firm’s Forterra tractors.

The smallest model in the smallest range of JCB Fastracs, the 4000-series, produces a maximum 175hp from a six-cylinder, 6.6-litre Agco Power engine, so it is a bit out of the power level reviewed here.

However, it is worth including for those seeking a machine with its specific attributes, such as a rear-load platform, four-wheel steering, full suspension and 60km/hour travel capability. 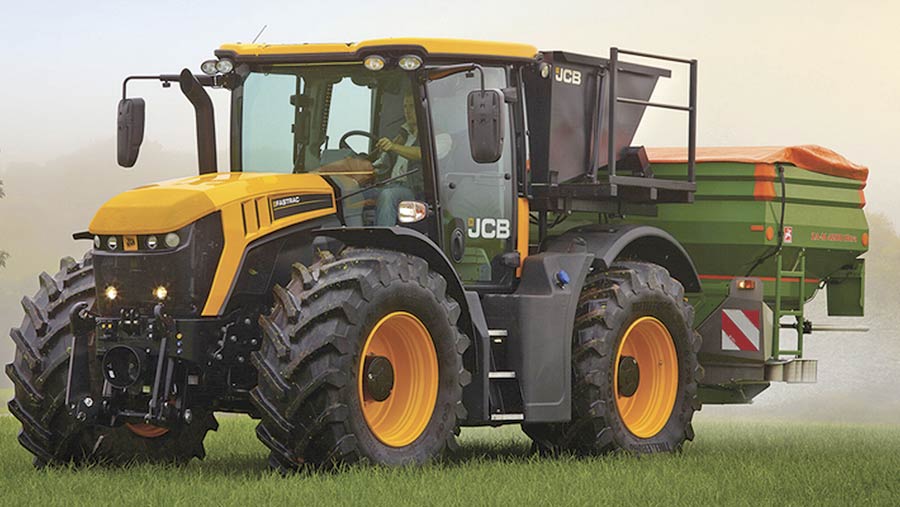 There is just one transmission, the Agco-sourced CVT, and one main specification level, so configurating things would appear to be relatively simple, although there are a number of options.