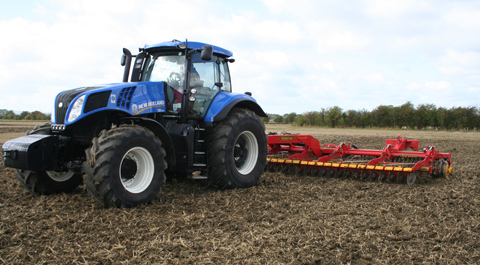 Buying a new tractor is potentially one of the most complex decisions a farmer makes; there are so many models, sizes and features – let alone prices – to consider.

In this three-part series we’ll explore the ins and outs of tractor specs to highlight the cost and benefits of choosing the right options.

In part one we take a look at power – how much it costs, how much you really need and how to get the most poke for your money.

The amount of power you need is largely determined by the demands of implements and the situations in which they work.

When the tractor is to work in and around buildings, manoeuvrability will be an issue, in which case a four-cylinder tractor will be suited than a six-cylinder machine.

Conversely, the longer wheelbase of a six-pot tractor will handle heavy mounted implements with added stability.

The cost of power

If you’re in the market for a new tractor, you’ll typically pay £300 to £800 per horsepower, which is quite a spread.

Higher levels of standard features and spec are mainly responsible for figures at the higher end of that range but engineering standards and ‘brand value’ also make a contribution.

There is some variation across different power outputs, with some tractors in the competitive 100-140hp bracket, where buyers also have a wider choice of spec levels, priced from £260 per horsepower.

Above 150hp, minimum prices climb towards the £400 per horsepower level as more standard kit is loaded on but still peak below £800, which suggests they represent better value-for-money than their lower powered, less well equipped counterparts.

In terms of individual makes, Zetor takes the ‘lowest cost’ prize among manufacturers selling tractors of significant volume by offering the lowest price per horsepower in just about every power category in which it competes.

Fendt is consistently at the top of every power band in which its tractors fall, with prices typically between £760 and £850 per horsepower, rising to more than £900 per horsepower in one case.

This is largely a reflection of the tractors’ high level standard specification but also the marque’s premium approach to the market.

How much do you need?

Only individual farmers familiar with the requirements of their implements can work out exactly how much they’ll need, especially in the case of ground-working implements such as cultivators, ploughs and drills whose power requirement is influenced by soil type, conditions and topography.

According to arable farm data analysis from Churchgate Accountants, horsepower per hectare ranges from around 0.7 in the Cotswolds to around 2.0 on heavy Cambridgeshire clays.

As a general rule, operators feel comfortable when a tractor is ‘on top of the job’, in other words, when it can handle its implements with at least a little in reserve to cope with more challenging situations as they arise.

At the same time, pto-driven and draft soil-engaging implements should be challenging enough for the engine to be worked at peak efficiency – typically at 1700-1850rpm rather than the 2200rpm rated speed – to generate the optimum ratio between work done and fuel used.

Buying too much power is costly: go for a 140hp version of the New Holland T6 series tractor instead of the 120hp model and the price increases by almost £3500; a 135hp Fendt 413 will see the buyer paying another £6300 over the price of the 115hp version.

Choose a 184hp Deutz-Fahr Agrotron M 650 and this bigger, more powerful machine comes with a price tag more than £22,000 higher than the 164hp model in the same range.

Going large can be justified in some situations if it means future-proofing against plans to increase the size of equipment – either to get jobs completed more quickly on the current acreage or in anticipation of taking on more land.

Ideally, a detailed investment plan for implements will help prevent available power and implement power requirement getting too far out of kilter.

Time is running out to purchase Tier 3 emissions compliant tractors before they are replaced by cleaner-engined but more expensive versions.

However, buyers can take advantage of modern engine technology by considering what power boost has to offer, which is explored in the next section.

What about power boost?

This feature uses a collection of sensors to automatically detect when it is appropriate for the engine control unit software to switch to a different fuelling map giving increased power and torque.

The feature is available across a wide spectrum of tractor sizes these days, with gains of up to 10% most common but with some tractors giving as much as 20% more power with boost activated.

Beware manufacturers claiming big power boost figures by highlighting the difference between non-boost output at rated speed and boost output at the top of the power curve rather than comparing like-for-like maximum output.

In its most common form, power boost is available for road transport when the upper gears are engaged and for driving pto-driven implements.

But don’t expect the engine to release more power for draft work simply by engaging the pto drive; it is only activated when sensors measure a significant load on the pto shaft.

Some systems also compensate for the power absorbed by a hydraulic pump running continuously – powering the fan on an air seeder, for example – and power boost is also available for draft work in some instances.

These variations are detailed in the engine details of each model in the Power Farming tractor guide.

Farmers who use their tractors mainly for pto work or transport operations rather than pulling draft implements can make some useful savings by selecting tractors with power boost.

For example, if 140hp is the target for these operations, a saving of around 7.5% of the price of a 143hp Case IH Maxxum 130 EfficientPower can be had by opting for the Maxxum 110 model instead.

Its 4.5-litre engine delivers the target output for both pto and transport work when equipped with the 16×16 transmission, even though for draft work it is limited to 121hp.

The Claas Axion 800 series offers a bigger saving by making use of this feature: the Axion 810 CIS serves up 210hp for the pto and transport, which is the same draft output as the 840 CIS generates.

If this is a significant feature in deciding which tractor to buy, be sure to establish when it is active because there are a number of variations.

For example, added power is available only for pto work on the two largest models in the McCormick TTX / X70 and Landini 7-Series ranges; they continue to run at the standard output for transport work.

The same applies to Range Command 24×24 versions of the New Holland T6 Series and to Case IH Maxxum models fitted with the equivalent transmission.

With the 16×16 gearbox option (called Electro Command on the New Holland machines), these tractors also have ‘power boost’ for road transport, but at lower outputs.

The engine management system on these tractors also compensates for the power absorbed by demanding hydraulic applications – and the same is true for the New Holland T7 and T8 tractors and the Case IH Puma and Magnum.

All Claas Arion and Axion 800 machines also compensate for the hydraulics and, in addition, are allowed the extra power and torque when performing draft work at speeds beyond 6kph – with a shallow disc cultivator or fast-working seed drill, for example.

Power boost is also available for field work on Massey Ferguson 5400 Dyna-4, 6400 Dyna-6 and the new 7600 Series tractors when equipped with either of these two transmissions.

JCB’s Fastrac 3000 Xtra tractors are available with engine management boost for transport only. Uniquely, the operator can over-ride the system and so make lightly-loaded return journeys using a less powerful but more economical engine setting.