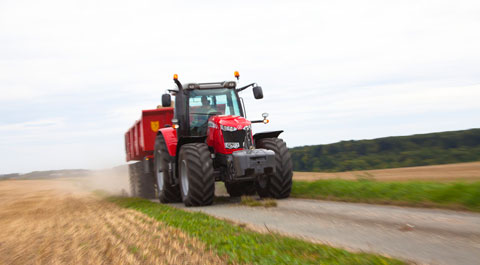 In the final installment of our guide to getting the right spec on your new tractor, Peter Hill takes a look at cab suspension and tyre options.

It may be considered a comfort feature by most operators but cab and front axle suspension will also contribute productivity gains that help justify their add-on cost where available as optional equipment.

In the field – and especially when it comes to cultivations and other relatively high speed operations – operators will drive to a level of discomfort.

In other words, they will only put up with so much being pitched about the seat before easing back on forward speed to make life more comfortable.

A well suspended seat can help, so with smaller tractors, where mechanical seats are the norm, look out for those with an air seat as standard or optional equipment.

Effective cab suspension will take comfort to a higher plane and is no longer a particularly expensive add-on.

With the exception of the entry-level Case IH Maxxum, New Holland T6 Dual Command and Claas Arion 600 C, these tractors can all have front axle suspension as well (it’s standard on the Fendt 400 Vario) to give the tractor as a whole (and any implement it carries) a less bucking bronco ride over rough field and road surfaces.

At add-on prices from £3000 to £4500 (a notable exception being the £11,800 independent wishbone suspension option on John Deere 8R tractors up to the 8285R), this investment should bring some draft work productivity gains through improvements in front-end traction.

There is variance in axle suspension design that could influence this effect; but trials of John Deere’s Tractor Link System suspension at an engineering institute in Hungary recorded 7-9% improved traction during cultivations. Deere reckon that’s equivalent to getting another 10hp out of the engine.

Performance gains and a consequent improvement in per unit fuel consumption are the rewards for investing in tyre options that make the most of a tractor’s power potential.

Weight is the key factor here; knowing the load imposed on the tyres by the heaviest implement the tractor will operate sets a benchmark for the size of tyre capable of carrying it at a favourable inflation pressure – preferably no more than 2 bar (28psi) and ideally closer to 1 bar (14psi).

That will mean going wider than the standard offering, probably using a lower profile design that with softer inflation pressures will also present a longer contact area to the soil.

Suppose a tractor’s standard tyre is an 18.4R38; replacing it with a lower profile 600/65R38 will likely result in an increase in contact patch area of more than 25% for a given load. Going for a larger diameter tyre will also result in a longer contact patch.

The gain in traction will be most evident in more poor ground conditions; on soft soils, reduced wheeling depth will not only reduce the effort needed merely to propel the tractor but can also reduce cultivation depth, which is often set to take out wheelings rather than to meet agronomic requirements.

Correct use of inflation pressures and ballast – which can cost a litre/hr in unnecessary fuel usage according to one study – will help make the most of investment in higher-spec tyres and get a pay-back in productivity and fuel consumption.

To help farmers visualise the impact of tyre size and inflation management Michelin has set up field demonstrations that simulate heavy cultivation on a loose soil surface using tyres inflated to the optimum pressure and pumped up too hard.

In one such demonstration, increasing inflation pressure from the optimum 0.7 bar (10psi) to 1.9 bar (27psi) resulted in wheel slip increasing from an ideal 6% to 15% and a rise in unit fuel consumption averaging 23%.

Dealer salesmen are not always equipped to give the soundest advice on tyre specification for a new tractor; better to quiz a specialist distributor or manufacturer’s tyre technician.