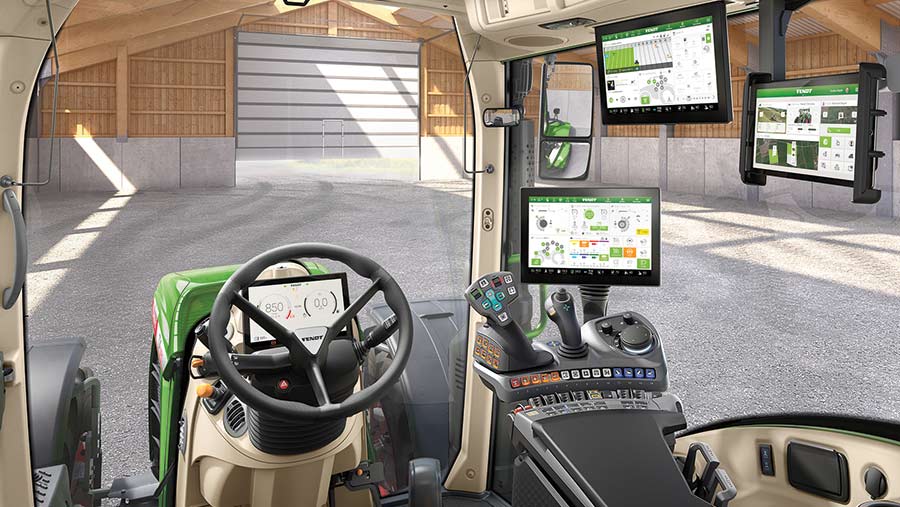 Fendt has launched a futuristic new cab called Fendt One that will initially be available on its 300- and 700-series tractors before being added to the rest of its ranges.

The two tractor models chosen to carry the new cab are the manufacturer’s best sellers and can be linked with its task manager and smart farming applications to create jobs, send them directly to the tractor and track fleet movements.

Major changes include a new joystick featuring programmable buttons that change colour to indicate the functions assigned to them. A small second lever can be used for front loader work and set up with any combination of 27 selectable functions, including Isobus controls.

A 9in digital display now sits in place of the old dashboard and gives the usual readouts – rpm, speed, warning lights and the like – and is controlled by a circular push button on the armrest.

Two 12in screens, one on the armrest and another in the roof, can have up to six different displays for fieldwork and Isobus implements. Both are touchscreens, with the roof-mounted display sliding up to leave the operator with a clear view of the road.

The bottom half of the screen is still visible in the folded position, showing air conditioning and radio details.

Other improvements include a better sound system (including a subwoofer), eight-microphone speaking system and a digital radio.

The Fendt One design is being rolled out in Germany, France and the UK before heading to other markets.