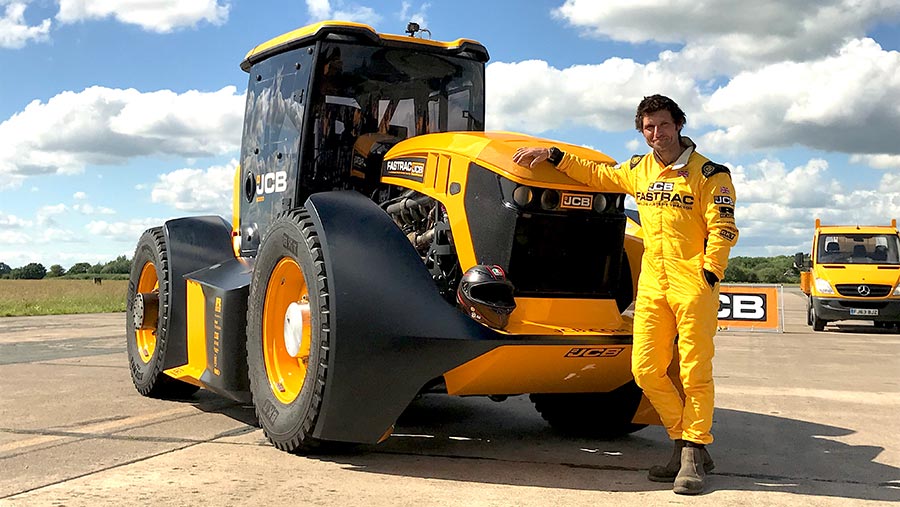 Daredevil stunt rider Guy Martin was at the helm of a highly modified JCB Fastrac as it broke the British tractor speed record, travelling at 103.6mph.

This eclipses previous records, including the attempt in Finland by Valtra with its T234 that reached a speed of 80.88mph in 2015 and the previous British record held by Top Gear’s unconventional-looking machine at 87.27mph.

The attempt took place at Elvington airfield, just outside York, with its 1.8 mile-long runway being the longest in the country and was the proving ground for test runs in the lead up to the record attempt.

JCB was keen to stress that unlike other tractor speed record attempts, its machine still resembles a Fastrac and is built from many of the same components used in production today.

Watch the video below of the super-fast Fastrac punch past 100mph.

Up close, you realise this highly tuned animal is not about to don a set of triples and start knocking over swathes of grass.

The chassis is based on a 4000 series Fastrac to keep weight low and reduce drag, but it has still gone on a diet to shed unnecessary bulk.

Many of the main components come from the heavier duty 8000 series, as strength was a key consideration in design.

The engine is a JCB 7.2-litre six-cylinder lump.

Keen-eyed readers will notice that the Agco unit used in production Fastracs has been ditched, although a standard off-the-shelf crankshaft has been used, along with a large common rail fuel system running upgraded injectors.

Tweaks to the block include improved valve seats, uprated conrods and auxiliary piston cooling, all designed to cope with the increased heat.

All this modifying has made it capable of turning out 1,000hp, but for the record attempt it was dialled down to produce around half that, clearly indicating what the machine may be capable of; maximum torque is 2,500Nm@3,500rpm.

It’s a similar story with the transmission.

Out goes the Agco CVT and in its place is a ZF manual six-speeder usually found in a lorry, running a multiplate wet clutch system.

Watch the video below of Guy Martin ease the Fastrac to a halt after setting a new British tractor speed record.

Using this transmission set-up has given the engineers electronic control of how the power and torque is delivered to the rear axle.

To get the extra boost needed, rather than going down the complicated route of marrying two turbos together, JCB bolted an electric supercharger to work with the existing turbo and give the designers full control on when the variable geometry unit kicks in.

Even with the short shift manual box, it still leaves the door open for turbo lag to creep in and slow the machine down.

So the supercharger has been set up to kick in when the next gear is engaged and then drop out once the turbo starts spinning, at about 3,300rpm, limiting any chance of lag. 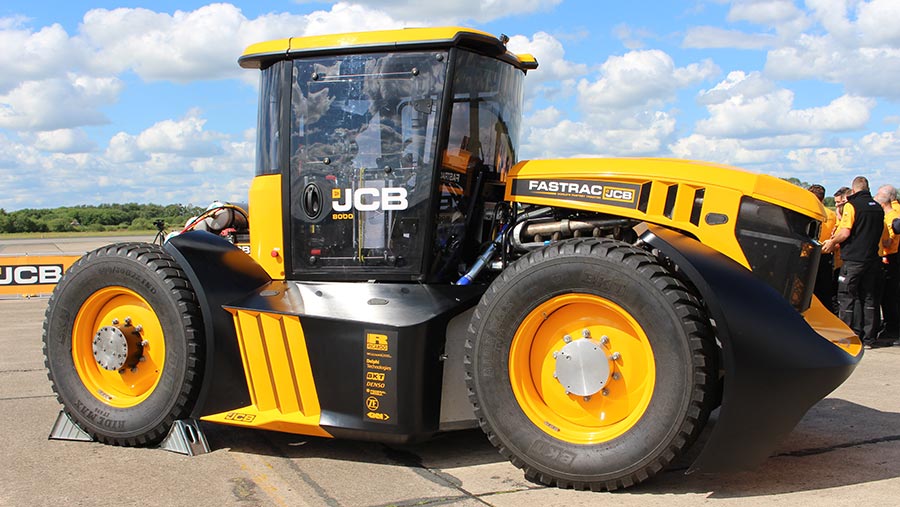 Although JCB stressed it’s a Fastrac at heart, one glaring omission in the running gear department is the lack of four-wheel drive, with all power directed to a rear locked axle.

This means the front axle is now a dropped centre unit, similar to a truck, to help it sit lower on the tarmac, although speed bumps do look to pose a serious challenge.

The rear axle is no longer in production and was from the 2000 series Fastrac, as the 5deg angled running position was ideal to accept the propshafts.

The lack of a rear differential means the rear BKT 28in tyres turn at exactly the same rotation, no matter what you’re doing, which offers boat-like turning circles – very different to the four-wheel steer production Fastracs.

Designing a solid axle was purely for strength and it has taken parts from different product lines – the half shafts are from the 8000 models and the drive head is taken from the old 3000 series.

Spacers were needed between the axles and hubs to get the rear wheels running in line with those at the front.

Weight-saving was a factor across the whole tractor, even the discs were reduced from 22mm to 16mm. Empty weight sits around 5t, whereas a standard 4000 series is 7.5t.

There’s no hitch or linkage anywhere on the machine, however JCB says that it is possible to fit one as it have used a standard axle casing.

With so much extra power being generated, keeping the engine from welding itself together was one of the biggest challenges faced by the young build team.

The radiator packs and oil cooler now sit in two pockets either side of the modified cab.

A front splitter has been designed to funnel air past the wheels and the bonnet and into the waiting holes to cool these areas.

Underneath the bonnet are three air intakes: one for the supercharger, one for the turbo and one directly on to the crankshaft dampener.

An onboard heating system has been installed to heat the block to 60C before starting and anything below this causes it to run lumpy.

It runs on standard diesel fuel and has a tiny 10-litre tank.

The cab is a 4000 series model but has been mounted lower and had its width reduced to limit drag.

Inside is a basic affair, with a truck racing spec roll cage designed around Mr Martin.

A single Cobra race seat is mounted centrally and has a six-point harness, the controls are sparse, with the single gear shifter and racing steering wheel the main features.

A small screen offers a speed read out and warning lights, with familiar JCB silver foot pedals controlling the tractor.

The clutch only has 30mm of travel for racing-style shifting.

The project started in August 2018 and JCB’s build team consisted of about 10 young engineers from across the company, with external help from engine specialist Ricardo, motor-racing team Williams assisted with aerodynamics, Delphi helped with the fuel systems and BKT made the specialist road tyres. 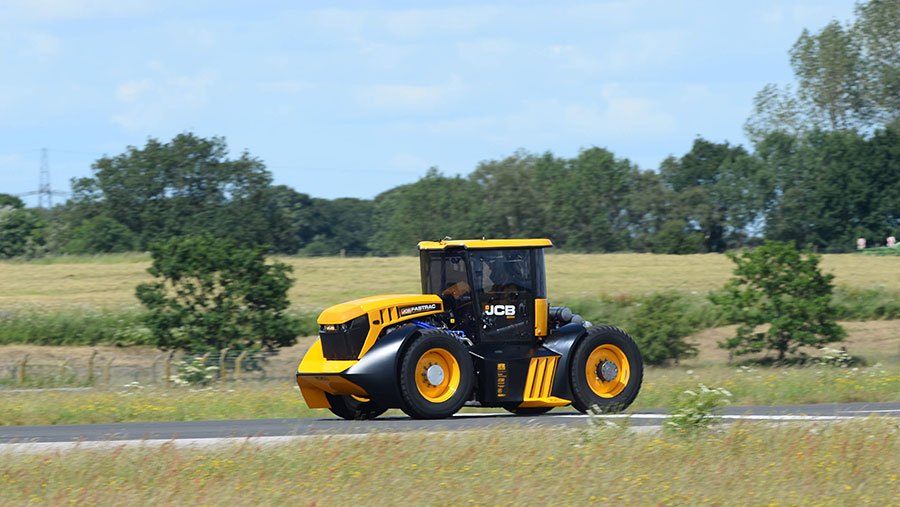 The record attempt required two runs, with an average of both taken for the result.

It was clear that the 15mph winds at Elvington certainly hampered the return leg and brought the final speed down.

JCB was clear that its aim is to become the undisputed world record holder with another run in the near future, so watch this space. A Channel 4 documentary on the build is also in the pipeline.