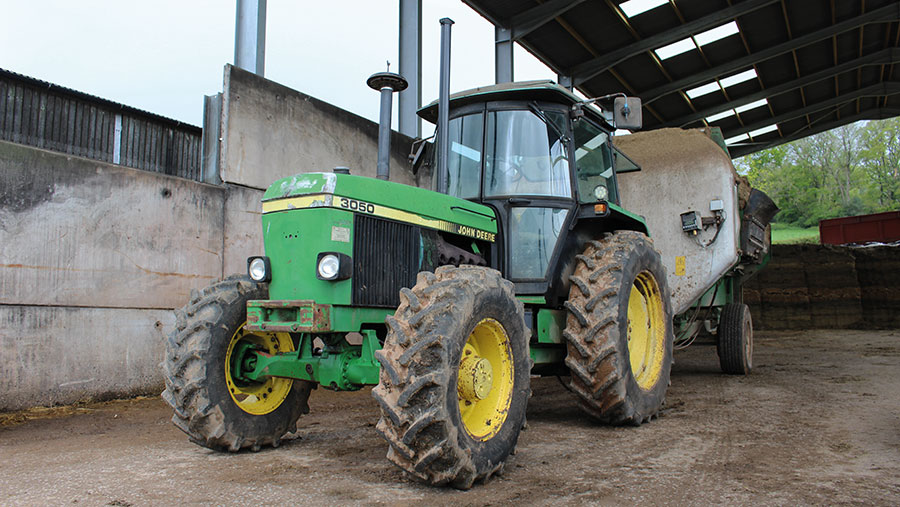 Most tractors with hour counts into five figures could expect a demotion from frontline tasks and possibly a chilled retirement, but Jack Reed’s John Deere 3050 still turns in a daily double shift on a mixer wagon.

It is up there with the busiest tractors on the farm – based in Southleigh, near Colyton – which is remarkable given there are four considerably younger models.

The 3050, which has clocked up more than 22,000 hours, is the ideal machine for the steady job of dolloping rations to the 240-head Holstein herd.

In total, it averages 1,100 hours/year, and Mr Reed says it is used nearly every day.

Most of the time it is hooked on the Keenan feeder wagon, but it also gets a run-out on a variety of modest-horsepower jobs throughout the year.

Although the farm purely has green-and-yellow tractors now, in the mid-80s it was steadfast to Massey Fergusons, with 590s being the main tractor.

However, it was the arrival of a JD 2140 that heralded a shift in allegiance.

“I don’t think there was a particular reason for the switch, but after the 2140 arrived, we never looked back,” says Mr Reed.

It was well specced with a 40kph transmission and digital dash, while the 3050 was seen as a backup machine, pulling the slurry tanker and carrying out lighter duties. 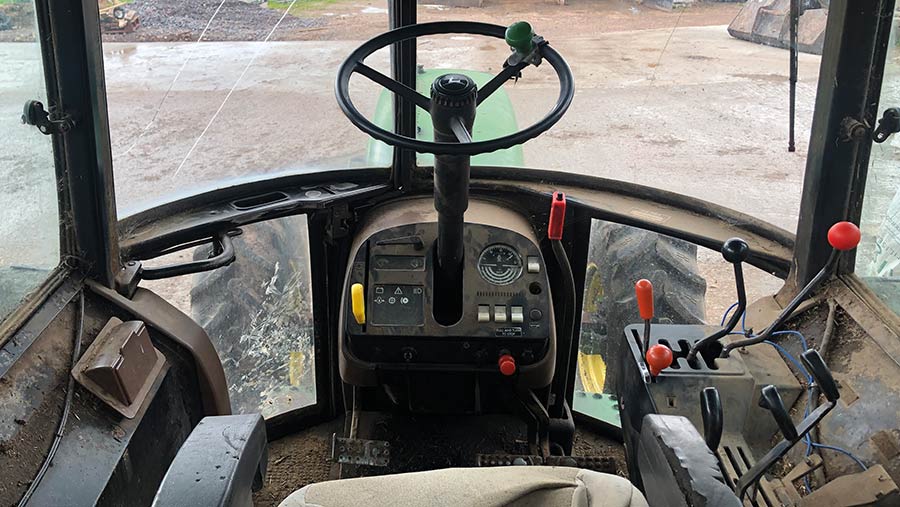 The cab is looking tired, but everything still works and it starts on the button © MAG/Edward Mowbray

However, for the best part of two decades it has handled the daily feeding chores with minimal fuss, and continues to muscle in when the main tractors are busy.

In the winter, it will drop onto the McConnel hedgecutter, while at silage time it gets a run-out on the tedder, as well as rolling grass ground in the spring.

Because it has narrower wheel spacings than the other tractors on the farm, it is ideal for sowing maize with a KV drill and then spraying it using the farm’s 18m Hardi Master 1,800-litre mounted sprayer – although a 1,000kg front weight is needed when fully loaded.

“The 3050’s loader was taken off about 10 years ago and stayed in the shed until we sold it. We didn’t have the need for a loader at the time and getting in the feed passages was trickier with it on,” says Mr Reed. 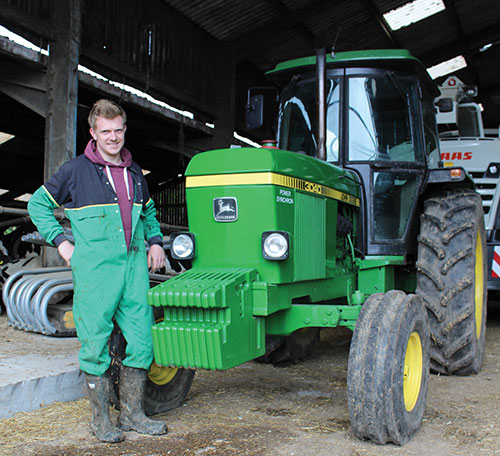 Meticulous oil changes twice a year and regular greasing mean the only serious engine work has been a leaking sump gasket that was replaced last year at about 20,000 hours.

“To change the sump gasket we had to take the propshaft off to gain access,” explains Mr Reed. “This allowed us to have a good look inside the block and we could see all the piston liners were still in decent condition.”

Recent additions include a new set of batteries, a full set of tyres and a second new clutch.

Life on the feeder wagon is starting to take its toll, though.

Gear changing between high and low range isn’t possible unless the main gear selector is in neutral – possibly a sign of wear on the clutch packs – and the spool block recently received new O-rings.

The exterior of the tractor remains in its working clothes, with fibreglass showing through on the bonnet and the cab roof still bearing the scars of a collision with the shed when rolling the clamp a few years ago. 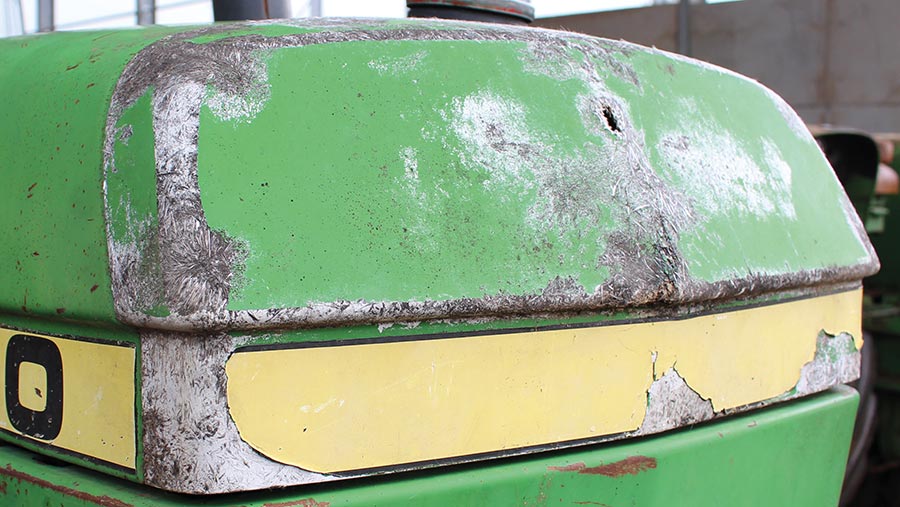 Sadly, the end could be in sight for the 3050. Herd numbers are increasing from 240 to 300 this year, so the current mixer wagon will struggle to keep up and the 3050 is right on its limit, with the pto whining when fully loaded and the splines showing worrying signs of wear.

“We’re not sure whether to sell it or keep it as a restoration project. It doesn’t owe us anything, and with a good clean-up, it could fetch £5,000.

A passion for older green-and-yellow tractors has seen Jack Reed add two desirable classics to the collection, which are now his pride and joy.

The tractor spent most of its life in Australia and it arrived in running order, but Mr Reed has since replaced the head gasket, water pump, alternator and starter motor, while changing it from 24V to 12V.

From the factory it had 133hp, but Mr Reed says it pumps out a little more from the 8.7-litre non-turbo, six-cylinder block, which runs through an eight-speed synchro box.

This isn’t the most refined setup, since the desired gear must be selected at the bottom of a hill as there is no splitter.

It is mainly used for tractor runs and shows, but last summer it turned its hand to rolling some ploughed ground.

However, the deafening noise from the straight-through exhaust means long days in the seat aren’t really an option.

A more recent addition to the fleet is an immaculate 3040 that had been treated to a new paint job by its previous owner – a retired John Deere mechanic.

Mr Reed paid £8,500 for it, which he reckons was a bargain given the condition and the modest 8,000 hours on the clock.

It will be used for light jobs such as tedding and rolling, but Mr Reed insists it is purely for pleasure.