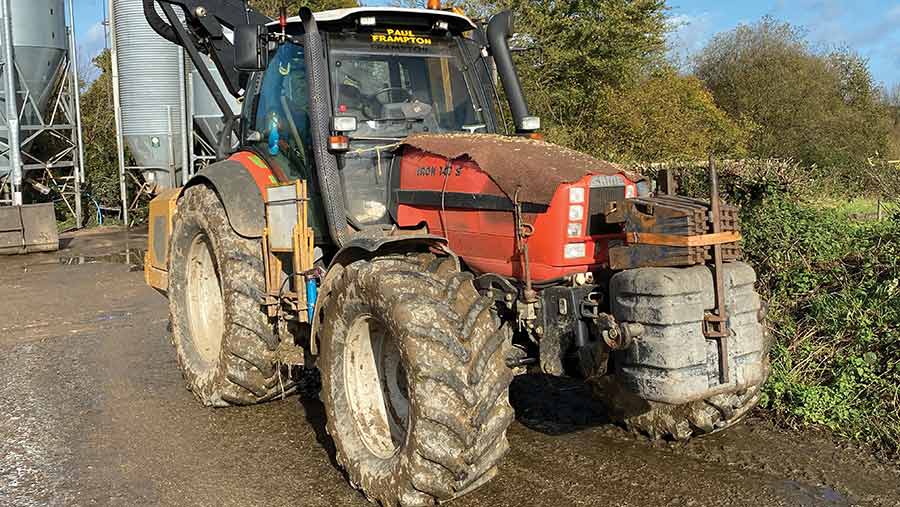 A quintet of new CVT tractors may dominate the fleet run by Dorset contractor P&L Frampton and Sons, but an unassuming 16-year-old Same is matching them stride for stride.

The hard-worked Iron 140S continues to clock up 1,500 hours/year on hedgecutting and raking duties, and is now tantalisingly close to the 30,000-hour milestone.

Running such an old-timer doesn’t exactly match the family firm’s machinery replacement policy, with most tractors hanging around for no longer than 6,000 hours – about three years – to keep within warranty protection.

But as it has shown few signs of slowing down, with the engine, clutch and brakes yet to see a spanner, they are reluctant to let it go. 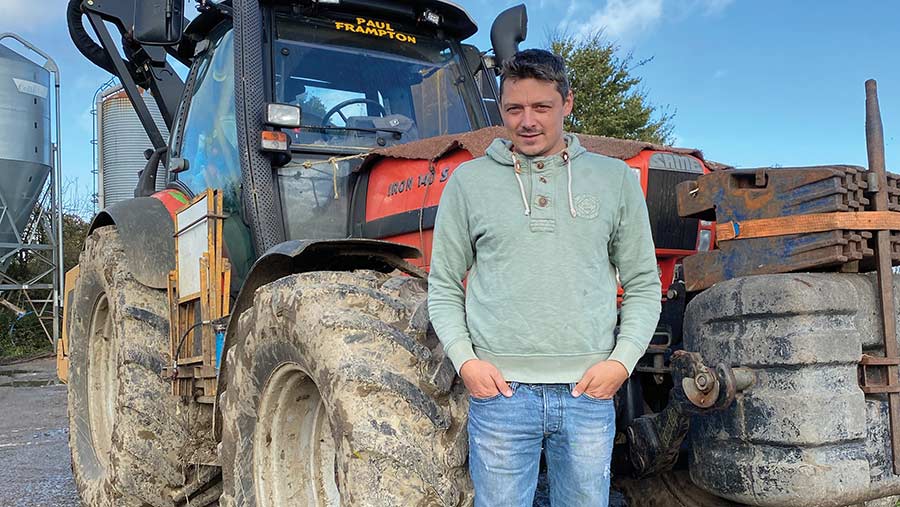 The last of the Sames

The Iron is the one remnant of the Framptons’ close affiliation with one-time SDF dealer Mike Broom Agricultural Engineers.

The contracting outfit has rattled through 10 Same and Deutz tractors since its formation in 1994, but the association with the brand waned after an SDF distribution reshuffle in 2010.

This swung open the door to other manufacturers. A Fendt 820 was the first to arrive, but there are now four different brands represented in the fleet.

“It was the last Same we bought and, although we had three Deutz versions after that – including an M640 – none of them were reliable enough to make them worth holding on to,” says Matt Frampton.

The Iron arrived on the farm back in 2004 for £39,000 and went straight to the frontline on baling, buckraking and silage carting duties.

It’s effectively a Deutz-Fahr 150.7 Agrotron in all but name, colour and power output, and it’s not hard to spot the evidence, with orange paint peeling over the rear wheel arches to reveal a familiar shade of apple green. 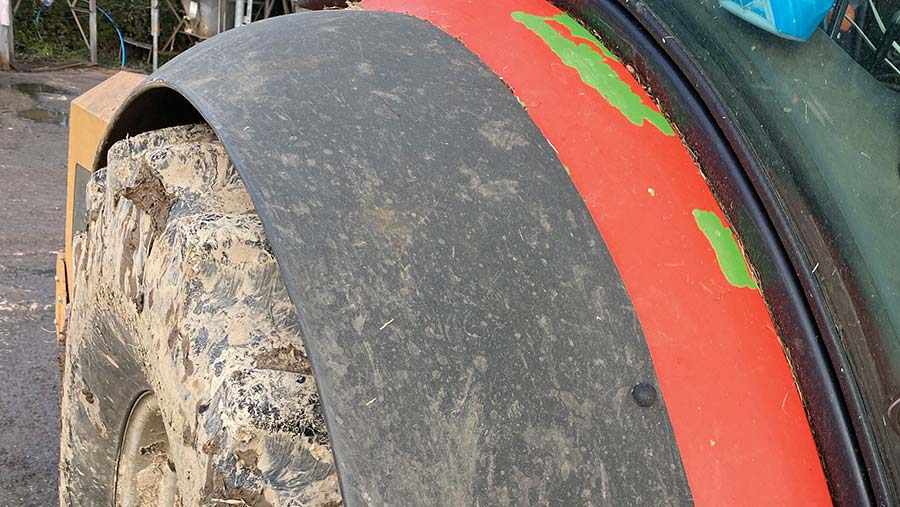 “The tractors with these engines have always been known to pull well. It’s still pretty torquey and I can tick along at 1,100rpm with our big McConnel PA6575 hedgetrimmer on the back,” says Mr Frampton.

“The downside is the fuel consumption. Though it obviously doesn’t use any AdBlue, it gets through about 10 litres/hour of diesel on the trimmer, which is pretty high compared with the new Valtra. I’ve thought about chipping it to get it running more efficiently, but I reckon it would probably kill it. And that would be a shame as, so far, we haven’t touched the engine.”

Unsurprisingly, the Same was also the only tractor in the fleet not to be struck down by fuel filter problems at the end of last year, despite the team having a fairly relaxed approach to servicing it.

It costs little more than £20 to replace the engine oil and fuel filters, compared with the typical £1.50/hour cost of the new tractors on a dealer service agreement, where the aim is to keep depreciation within £10/hour.

“When you consider the Same is still worth at least £10,000, depreciation is less than £1/hour, so it’s a seriously cheap tractor to run on hedgetrimming.”

However, the big heads and orbiters on new trimmers are starting to get a bit heavy for it.

“I’ve gradually added more weight to the front – I’m now at 900kg. Moving to a bracket-mounted trimmer has helped, as it distributes the weight more evenly and keeps things fairly sturdy.”

For this, they run a gang of five new CVT tractors:

The Iron runs a ZF six-range, four-speed semi-powershift gearbox with creep. Remarkably, despite years of baler work, the brakes and clutch have remained untouched, though time is beginning to catch up with the latter.

“It’s a bit jerky on the road and we took it to get the clutch recalibrated, but there was no tolerance left. It’s probably something we’re going to have to get done in the next year.”

The powershift clutch packs were replaced at about 15,000 hours – a job done by Mike Broom, who originally supplied the tractor. 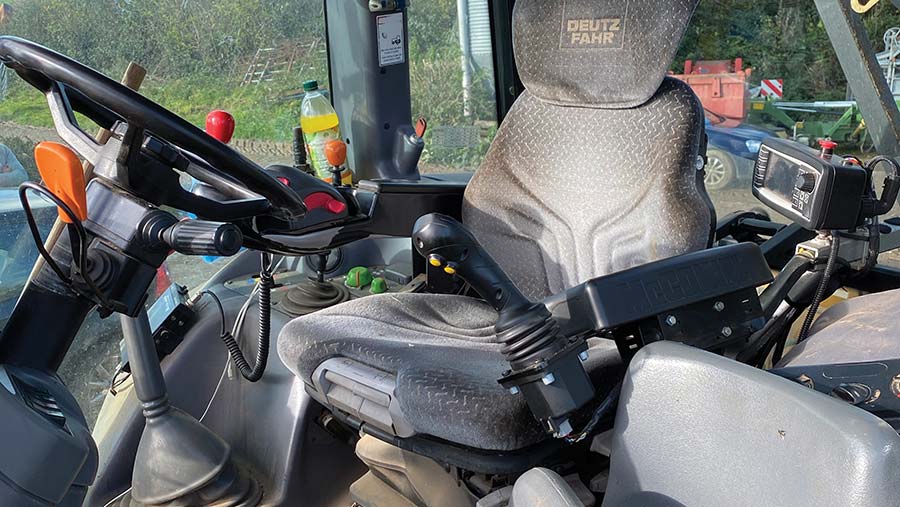 Track rod ends have also been replaced several times, as have the suspended cab’s mountings points, which never seem to last particularly long. And the front axle needs rebushing, too.

Other alterations and improvements have been few and far between, mainly because the Iron was pretty highly specced when it arrived. They extend to gearing it up for full-time hedgecutting with LED lights and a rug for the bonnet.

The transmission is rated to 50kph – though has rarely hit that, according to Mr Frampton – and it has more than enough hydraulic capacity to run the hedgecutter through the four lever-operated load-sensing spools. 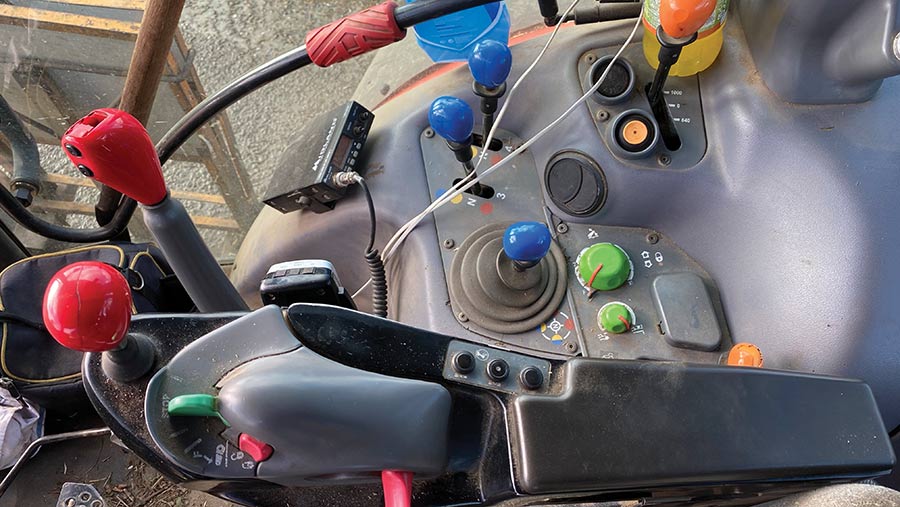 However, the Framptons chose not to spec air brakes at the time of purchase because all of their trailers were running oil-activated anchors.

As for the cab, visibility is good – Deutz has made very few changes to the structure over the past 15 years – and there is plenty of glass, though that means it can get hot in the summer.

Air-conditioning is a notorious weak point, and the Framptons have replaced the fan motors in the cab floor several times.

“One Same is probably enough, but I always keep an eye on the second-hand market,” says Mr Frampton.

“Mike Broom sold four or five of them in our area at the time, but this is the only one left. There are always plenty for sale abroad, but they’re fetching more money than ones in the UK.”

“You never know whether the others will be as reliable as this one – we had slightly later Deutz tractors that were nowhere near as dependable.”

If you have a high-houred tractor that’s given sterling service, has clocked more than 20,000 hours and is still on the front line, then we would like to hear from you.