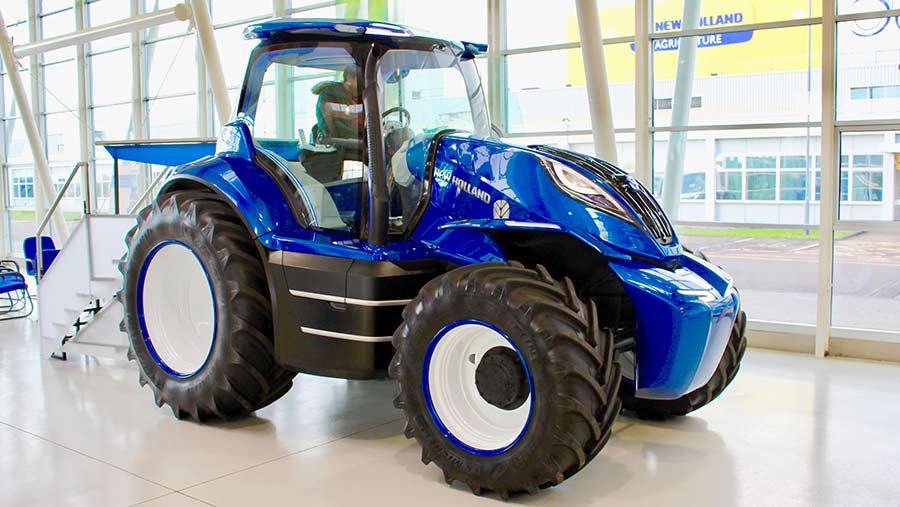 If you remember New Holland’s first attempt at a methane tractor back in 2013, you’ll probably recall being hugely sceptical and quite underwhelmed by what was a T6 tractor with an odd-looking cab.

However, after dabbling with other forms of alternative power, it seems as though the investment has been ploughed into methane as the most viable source of future propulsion.

The second-generation tractor appears radically different to the first effort and since the global design team took control, the result is a machine that now seems to be the futuristic design we’re told its power source represents.

See also: Hydrogen could be the farm fuel of the future

If we’re honest, it is the most cutting-edge design of a conventional tractor in years. With its sleek curves, LED lights and redesigned cab, the look is more akin to a Ferrari than farm machinery.

New Holland are keen to emphasise that this tractor sits within a sustainably managed farm and can be run off byproducts already produced by the business.

Underneath, changes from the diesel-powered T6 aren’t huge, with the methane option using the same chassis, gearbox and back-end arrangement, and only the engine, fuel tanks and cab being radically altered. 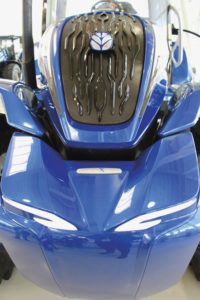 The tractor is powered by the same FPT 6-cylinder 180hp engine in the current T6 and some of the T7 range, with the firm claiming there is no difference in grunt between the two fuel sources.

Key to this is stoichiometric combustion, which burns 100% of the fuel when mixed with the right amount of air and only releases carbon dioxide and water.

This is different to cars and planes, which have design limitations preventing them reaching this efficient level and so produce additional dirty exhaust products such as carbon monoxide.

Thanks to this system, one of the biggest carrots to potential owners will be a possible 30% saving on running costs, along with using no AdBlue or SCR technology. Emissions are around 80% lower than in the diesel equivalent, claims the firm.

An added bonus that will put a smile of most operator’s faces is the return of an engine note that wouldn’t seem out of place on a mid-90s tractor, as there is no emissions technology limiting engine bark.

A top speed of 50kph remains and a decent rear lift capacity of 7,864kg further adds to the appeal. 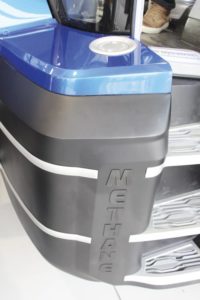 The methane is stored in the pressurised composite layered tanks.

These take the place of front mudguards and weight block and diesel tank offering a run time of up to eight hours (this figure is very dependent on the type of use), with filling time similar to diesel using a single nozzle.

However, New Holland claims that due to the properties of methane a pump isn’t required to move it from tank to engine.

This means extra tanks can be stored elsewhere on the tractor, with either a larger front weight or securely on an implement.

The tanks connect via flat face couplings and once one tank is empty, the supply would switch to the next full one, leaving no need to stop and reconnect, we’re told.

The cab and body styling are the most notable differences from a standard T6 and the previous methane tractor.

The styling team sought inspiration from automotive designs and one of the main aims was to have a fully integrated unit with sleek curves linking the bonnet, cab, fenders, fuel tank and steps – a big departure from modern, boxy tractor design and very similar to a car. 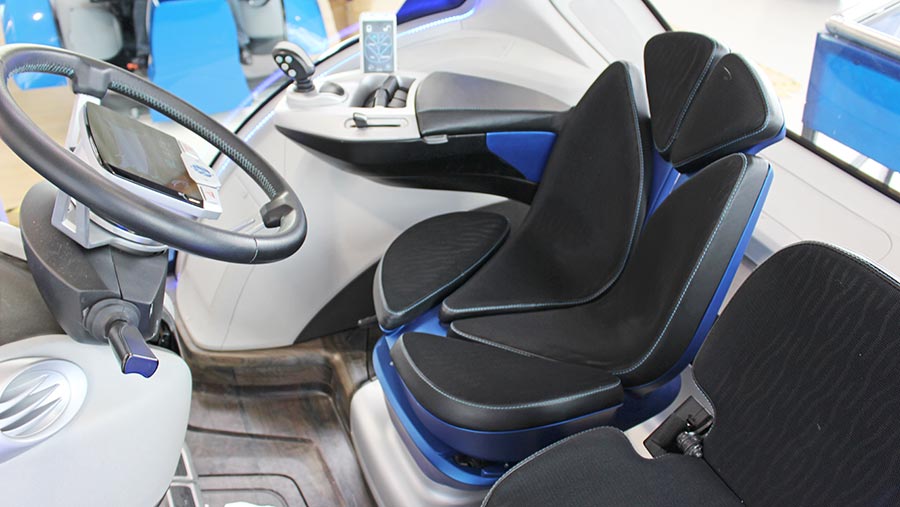 However, New Holland is keen to stress this isn’t just style over substance and being used on farm is still its primary purpose, rather than a marketing pony with an LED-lit badge – it even has an area to stash your tools.

The cab area has 20% increased glass area thanks to some thinner cab pillars.

In the seat – which has been designed as a New Holland badge – the cab does feel light and refreshingly clutter free.

The usual cab pillars bestowed with rocker switches and dials have gone as have the light and indicator stalks around the steering column. In their place is a very simple right-hand arm console, which houses only spool valves controls and a small gear stick.

Experimenting with materials hasn’t just happened in the engine department. The cab floor is now clad in wood, which the firm says will last longer and has better sound-deadening properties than rubber. 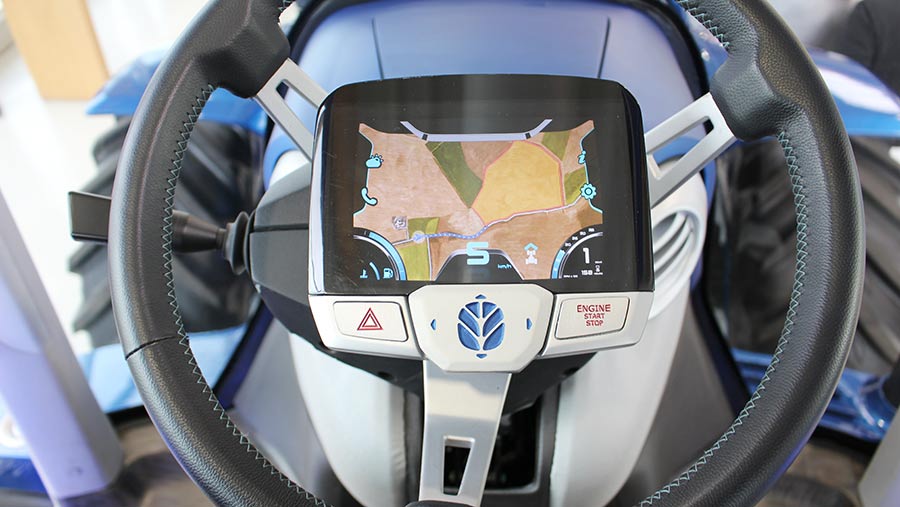 The tractor is now mainly controlled via four screens – three in the roof and one fixed in the centre of the steering wheel.

The latter gives readouts on gear, speed, engine temperature, fuel and, when driving on the road, satellite navigation is displayed here.

This screen also houses the many cameras on the tractor. There are two rear-facing cameras that take the place of wing mirrors when on the road, a reversing camera and a 360deg view when in the field.

Up in the roof to the right of the driver are the three other screens, with the first one showing the camera view selected by the operator.

The central screen displays the tractor details such as PTO speed and hydraulic flow – all information typically found in a standard tractor monitor. 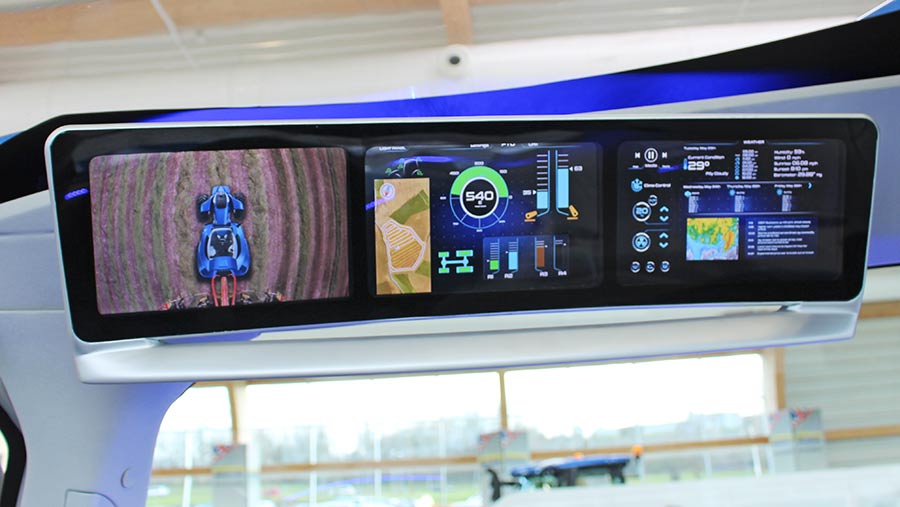 The final screen brings up weather data, news feeds and climate control information, along with phone calls and the media centre, all accessed by voice control.

Not for another three years, at least.

New Holland has remained cautious with how long it will take to implement full-scale production.

The Basildon line currently produces more than 23,000 tractors a year and for methane power to be an option, it has to be seamlessly produced in Essex, without hindering current assembly levels.

With the benchmark being a diesel equivalent, the methane tractor still has to prove itself under extensive field testing to iron out any snags.

In June 2015, New Holland told the world’s press that methane-powered tractors will be on farm in five years.

It’s now 2018 and we’re told this is now three years away, so we are already a year behind schedule on this becoming a reality.

A key consideration for New Holland will be how much technology the tractor has and how easy it is to use. Overcomplicating previously simple tasks such as turning the lights on will deter buyers.

The new model is unlocked from your smart phone, which is then plugged into its own port on the armrest to seamlessly connect to the tractor’s Bluetooth – leaving your phone in the tractor could be critical if you’re working alone and have an accident.

A likely destination for these machines could be livestock farmers who already have biomass or AD plants and only need to refine this process to produce methane for tractor fuel. A business without this may struggle to justify the investment.

As ever, the biggest factor will be price and New Holland remain tight-lipped due to the tractor still receiving design tweaks.

We suspect you’ll be shelling out a bit more than opting for a standard T6, but a 30% saving in running costs should keep the bank manager happy.

Convincing farmers to believe this tractor could be on their farm, feeding their livestock and saving them bundles of cash at the same time is going to be the hardest job, as currently you’d be scared to wear your wellies inside it.

Getting it on farm is the only way New Holland will prove to buyers it can match the benchmark set by diesel. We’ll find out when the order books open in three years.