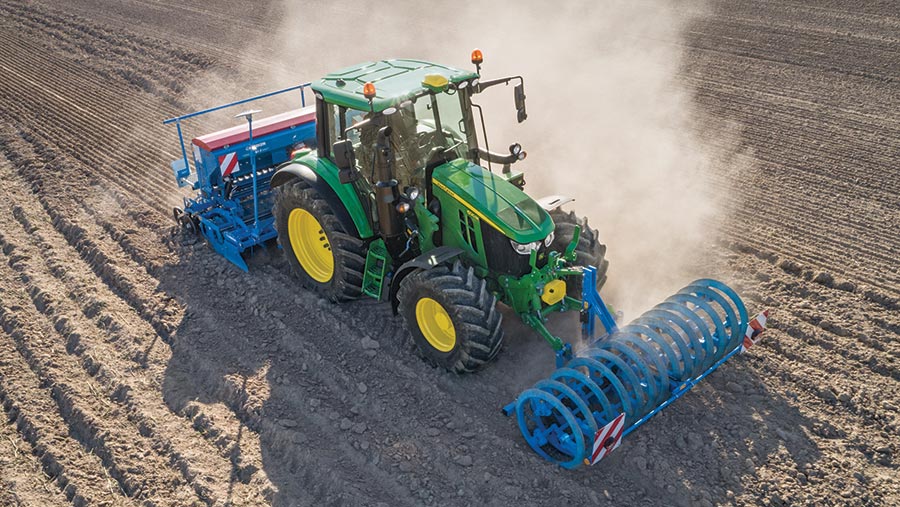 These are the more compact 6M models with a low-slung bonnet design and a wheelbase of just 2.4m.

All machines now feature IPM, which boosts performance, but 20hp for pto and transport work. This means the 6140M can develop 166hp at max power with IPM.

Deere is offering three gearbox options on the 6Ms. PowrQuad and AutoQuad are the four-step power-shifters, while the CommandQuad Plus is a fully automatic gear and range shifting transmission.

There’s a brake to neutral function, and when Ecoshift is used, a top speed of 40kph can be reached at just 1,590rpm.

Turning circles of 4.35m are possible with an additional slimmer steering wheel cowl and panoramic window for loader work.

Permissible gross weight is 10.45t, which means a payload of 4.7t is on offer.

All models feature a newly designed cab, which is whisper quiet at just 70dba.

Models with the CommandQuad transmission can be specced with a baby version of Deere’s Command arm.

All tractors can run JDLink Telematics, StarFire 6000 GPS receivers and either the 4240 or 4640 GreenStar displays, with RTK as an option, too.

The new 6M series has been able to order since last month in Select, Select+ and Premium specs.