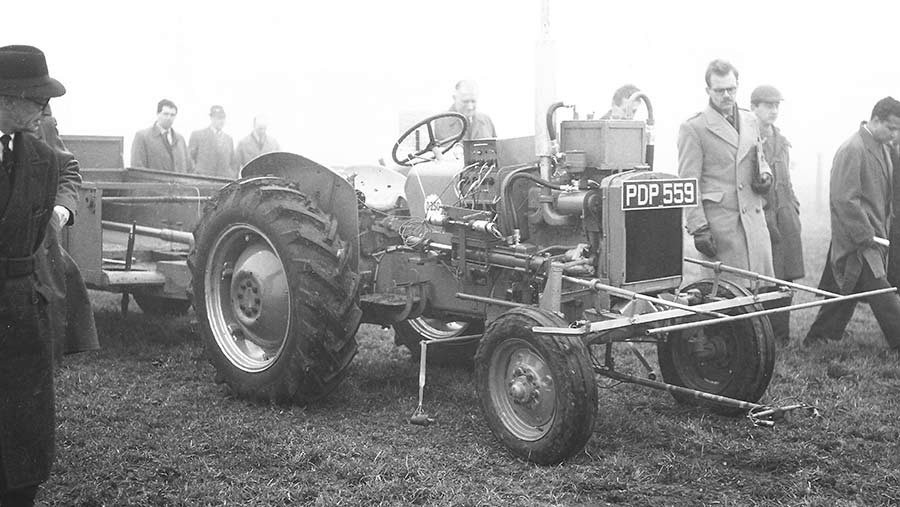 The Reading University driverless tractor pictured during a demonstration in 1958

The UK played the leading role in the early stages of driverless or autonomous tractor development and the first experimental tractor designed to carry out a range of tasks without a driver was built at Reading University in Berkshire.

The project started in the mid-1950s, based on an International Harvester B-250 tractor with steering guided by an electric current carried in a wire buried in the ground below cultivation depth.

Development work was carried out on the university’s Sonning farm, where the tractor was first demonstrated to an audience of highly sceptical agricultural students in about 1958.

Modifications to allow driverless operation included a pair of front-mounted sensors that followed the guide wire and were linked to the steering.

A front-mounted emergency stop control was triggered by contact with an obstruction, and the tractor could also detect special signals programmed at various points along the length of the wire, including instructions to raise or lower the linkage for headland turns, operate the pto or stop the tractor.

It was the world’s first driverless tractor but, having achieved one of the most extraordinary developments in tractor history, the university handed the project over to the Bedfordshire-based National Institute of Agricultural Engineering, later renamed the Silsoe Research Institute (SRI).

The Silsoe team continued to develop the Reading guide wire system, using a Fordson Major tractor that had already featured in a hydrostatic transmission project. 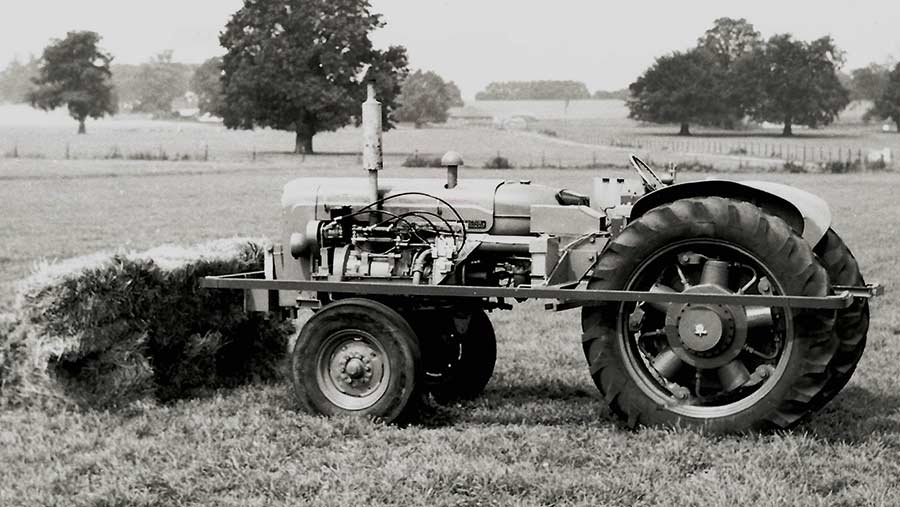 At the same time, a Hampshire-based company called Auto-Track was also developing a guidance and control system based on a network of wires buried 20in below the surface and carrying an electric current from a 12v battery.

The aim was to produce a commercial system available as an add-on for a standard farm tractor, and the prototype version was launched with a working demonstration at the 1969 Royal Show using a much-modified Massey Ferguson 165 tractor.

Buried wire guidance was the best technology available in the 1960s and 1970s for driverless tractors, but for some fieldwork it had limitations that restricted the demand for the Auto-Track equipment.

One of the jobs that suited the guide wire system was grass cutting and the first Auto-Track customer – and almost certainly the first person anywhere to buy a driverless tractor – was an Essex fruit grower.

His Massey Ferguson 135 vineyard tractor was fitted with Auto-Track guidance in 1970 and was used for regular grass cutting in his orchards. In fact most, or possibly all, of the small number of Auto-Track sales were for orchard mowing.

Because of the limitations of the guide wire system, interest in driverless tractors faded during the 1970s and 1980s, but development started again in the 1990s as more advanced technology arrived.

Farming moved into the space age with the introduction of combine harvester yield mapping based on GPS technology in 1991 and GPS soon appeared in the guidance systems for driverless tractors.

This time the interest was international, with experimental tractors demonstrated by leading manufacturers including Deutz and Renault in Europe, and a research centre in Japan converted a Kubota tractor. 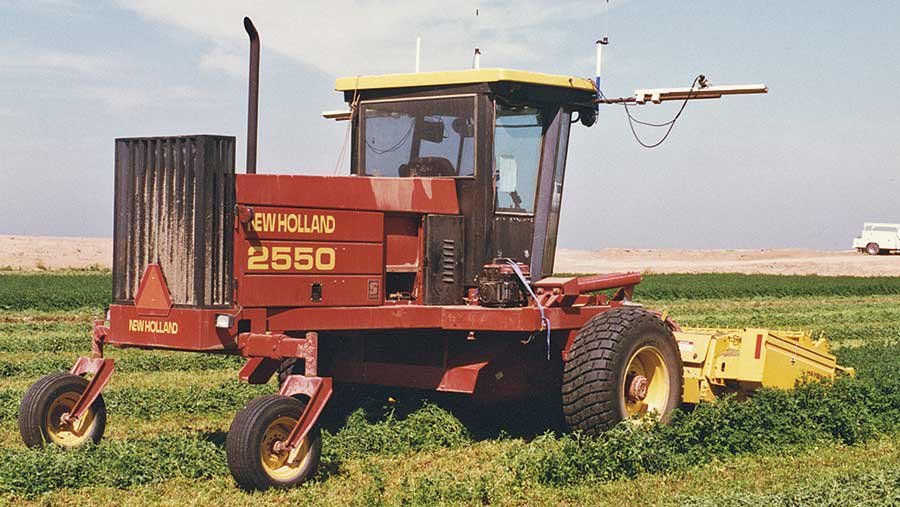 The project was co-ordinated by the National Aeronautical and Space Administration (Nasa), and it included control technology from the Nasa Lunar Rover – an unmanned vehicle developed to travel on the moon’s surface.

Scientists at a leading US university were also involved and, in the initial stages at least, there were close links with a Ford Motor Company programme that was in the early stages of developing a driverless car.

The New Holland project began in about 1993 and the machine was working without a driver in 1995.

Design changes included replacing the mechanical gearbox with an electrically controlled hydrostatic transmission, controls were operated by computer and guidance was based on computer analysis of images from two front-mounted cameras, plus additional data from GPS.

Development work continued for several years, with a suggestion that commercial availability could start in 2000.

The budget for the driverless vehicle developed at Writtle Agricultural College in Essex was probably more modest.

Built during the mid-1990s and called the Squire, it was based on the chassis from a small second-hand industrial truck powered by a two-cylinder, hand-cranked diesel engine. 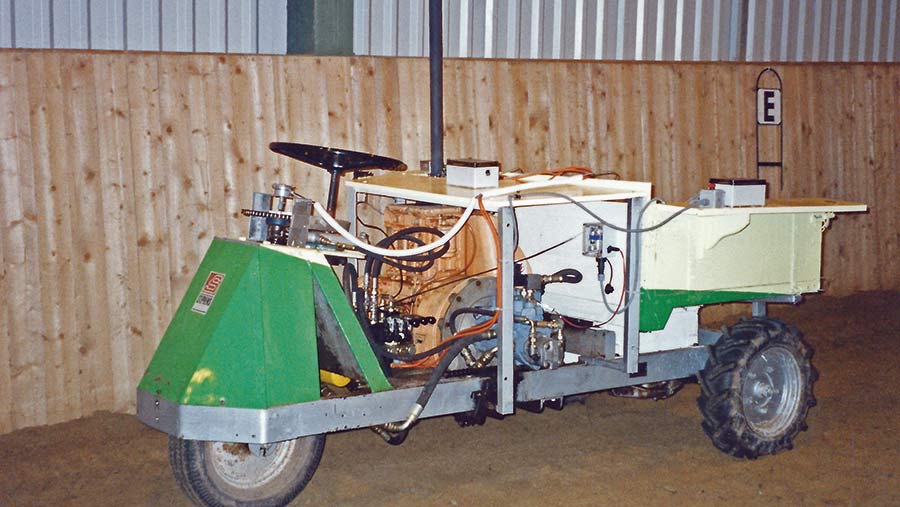 Guidance was by proximity sensors that measure distance – similar to the reversing sensors on cars – and these were attached to the sides of the vehicle, allowing it to drive itself beside a wall or fence.

One idea was to continue the development to produce a yard tractor for intensive livestock units, and there were also long-term plans to adapt the technology for fieldwork such as bale collection.

Having had a prominent role in the early guide wire development, engineers at the SRI started a new driverless vehicle project in the early 1990s, demonstrating the result in 1996.

This time the vehicle was designed for working in rowcrops, and instead of a buried wire, the steering was controlled by computer analysis of images from a CCTV camera mounted on the vehicle. 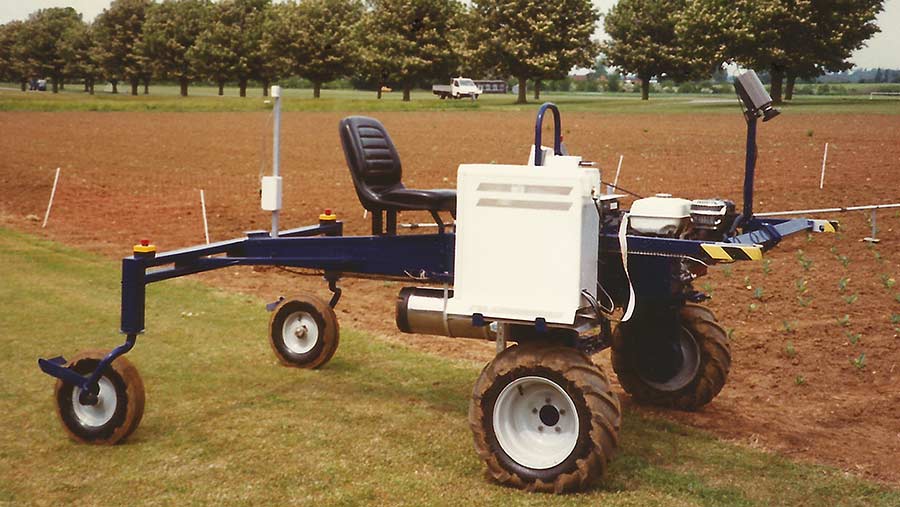 The version shown in 1996 was developed from a small tool-carrier tractor powered by a 10hp engine, and the guidance system was sufficiently accurate to operate hoe blades within 2cm of the crop plants.

The vehicle could also individually identify weeds between the rows and spot treat them with herbicide, and fertiliser could be placed close to the crop plants.

The Silsoe rowcrop tractor performed well. It was manually driven to and from the field, but apart from that it could operate without assistance, travelling up and down the crop rows and making 180deg turns at the headland.

It was welcomed as a major step forward in precision farming for crops such as field-scale vegetables, but hopes that it would be followed by a commercially produced rowcrop tractor failed to materialise.

Instead, some of the guidance technology was adapted to operate a tractor-mounted hoe made by Garford Farm Machinery.

While the farming industry has adopted robot technology for just a few tasks such milking cows and repetitive handling work in vegetable packhouses, the commercial impact of more than 60 years of driverless tractor research and development remains tiny.

Few farmers have so far been willing to trust their fieldwork to equipment that does not have someone in the cab to make decisions and deal with problems. 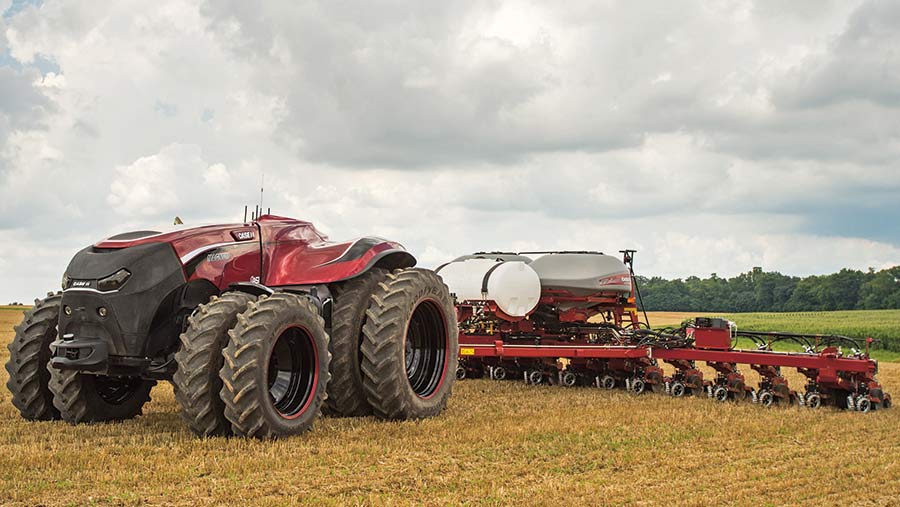 Announced in 2016, the Case IH Autonomous Concept Vehicle, or ACV, is a recent addition to the driverless tractor list © Jackie O Photography

Despite the lack of customers, efforts to develop driverless tractors continue, with some of the emphasis in Europe concentrated on tool-carrier-type tractors, while US and Canadian development favours larger tractors for cultivations and haulage.

What happens next is difficult to predict, but at this stage the possibility of large-scale tractor driver redundancies as robots take control seems a distant prospect.