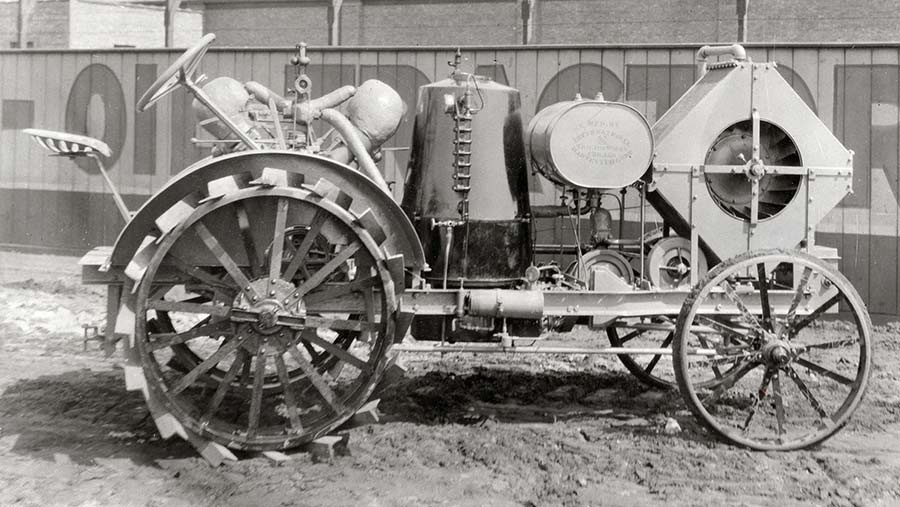 An early version of the International steam tractor. The box at the front is the condenser

Britain once led the world in developing agricultural steam power, with stationary engines arriving on farms in the 1790s, followed later by portable and traction engines as well as cable-operated cultivation equipment.

Steam offered the first opportunity to significantly increase farming productivity by replacing horses with engine power, and steam engine sales reached a peak in the 1890s.

The coal-fired engines offered a big increase in work rates, but capital costs were high and customers were solely big-acreage farms and contractors who could justify the investment.

As well as their cost, steam engines suffered from other disadvantages that became apparent as tractors with internal combustion engines began arriving on farms.

The steamers’ poor power-to-weight ratio was a problem for field work, they used large quantities of coal and water, and there was a time-wasting delay as the operator waited for sufficient steam pressure to allow work to start.

By the early 20th century the tide was turning against steam power on farms, and when domestic food production needed an urgent boost during the 1914-18 war, the extra power came from petrol-fuelled tractors rather than steam.

Although demand for steam power on farms was shrinking rapidly by the early 1920s, there were still some optimists who hoped for a steam revival.

They foresaw a new generation of steam tractors based on technology that had already achieved modest success in the motor industry, particularly in the United States, where steam cars were briefly available in the early 1900s.

Advances that helped the introduction of steam-powered cars and that could be adopted for steam tractors included using paraffin instead of coal to heat the water.

The liquid fuel needed less space and provided easier heat control, while the stoker with a shovel to feed the fire with coal was no longer required.

Another development from the car industry was the use of a small volume of water in a tubular steam boiler, which allowed a big reduction in size and weight and also reached working pressure more quickly.

Adding a condenser allowed water to be recycled instead of disappearing in a cloud of steam.

While the technical advances were important, other factors raising hopes for a revival included steam’s established reputation for reliability, contrasting with the erratic performance of the internal combustion engines that were still at an early development stage.

A further attraction of steam was its ability to maintain the steady speed and power output needed for stationary work such as threshing, where steam power often remained the preferred choice until combine harvesters took over.

The most ambitious steam tractor developments came from America, including a major research programme from International Harvester.

IH had been the biggest tractor manufacturer in the world until the arrival of Henry Ford’s Model F Fordson in 1917, which pushed it into second place.

The steam tractor programme starting in about 1920 was part of an IH recovery plan, using paraffin to produce steam from tubular boilers to power an engine with two cylinders arranged in a V-formation. 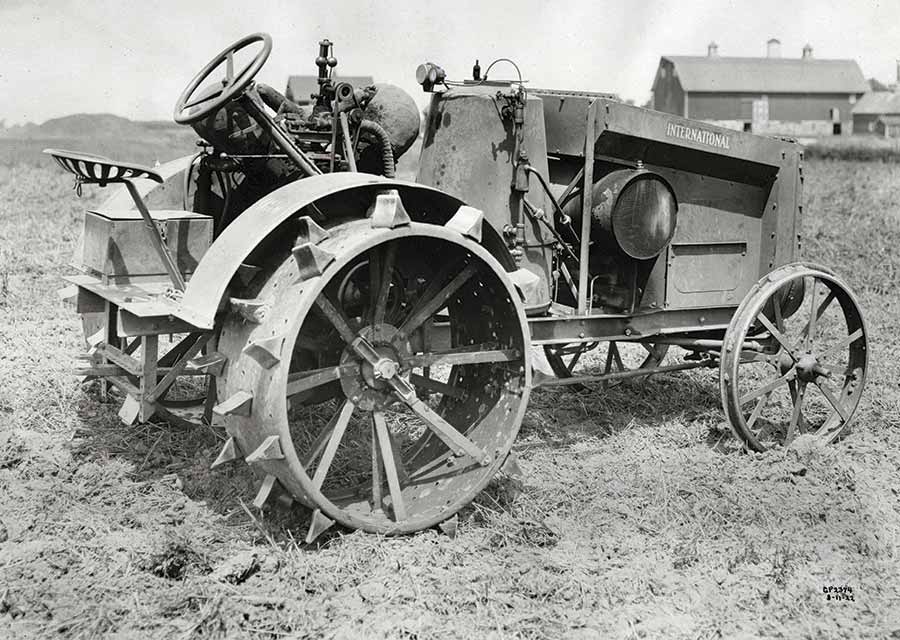 The IH engineers built several versions of the experimental tractors, all with condensers to recycle water.

Performance during the field test programme was said to be encouraging, but the project was abandoned in 1923 before the tractors reached the production stage.

Reasons for ending the steam programme may have included the sales success achieved by the new Farmall tractor introduced in 1922, which was also been part of the IH recovery programme.

There was also a lack of customer interest in the steam tractors being introduced by other American companies at that time.

Disappointing sales achieved by other steam tractors included the Model A from the Bryan Harvester Company.

This was Bryan’s first tractor, available from 1920 and producing 20hp at 220rpm using steam from a tubular boiler working at up to 600psi, with a safety device that stoped the fuel supply to the burner when maximum pressure was reached. 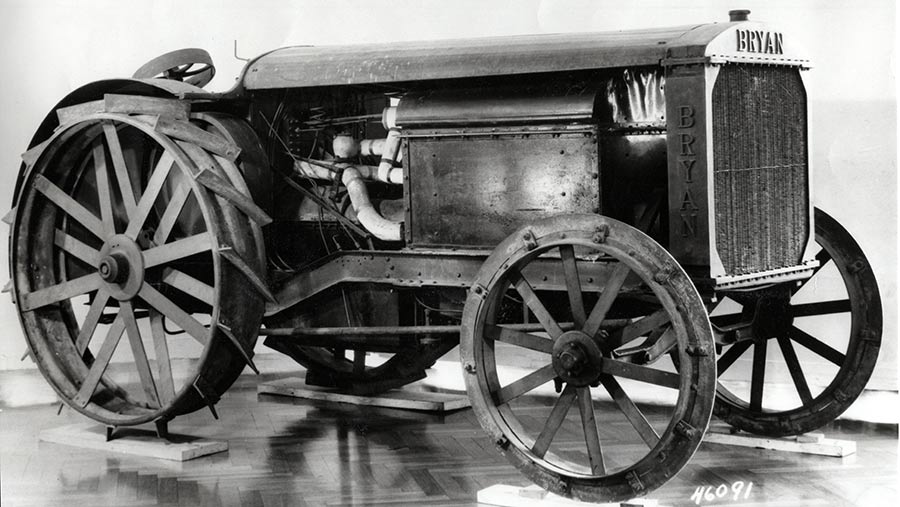 Sales figures for the Bryan steamer are not available, but the total was small, with production ending in about 1928.

The list of American companies hoping for a steam revival included AD Baker, which had begun building steam traction engines in the late 1890s when demand had peaked and tractor sales were starting to expand.

Baker’s loyalty to traditional steam power continued while the number of customers was shrinking, but in 1921 it introduced a new steam tractor which was smaller and lighter than previous designs.

Baker resisted the switch to liquid fuel, but it developed an automatic feed system to deliver the coal to the firebox.

Although Britain was the birthplace of steam-powered farming, with British-built engines and equipment dominating worldwide export markets for many years, the idea of an agricultural steam revival in the 1920s attracted only a cautious response from UK manufacturers.

One of the problems for UK-based companies moving into the steam tractor market was their preference for using coal, and they showed little interest in paraffin-fuelled burners.

In about 1918 the Yorkshire-based Summerscales company announced a steam tractor that could burn either coal or coke (a cleaner-burning, processed form of coal), and fuel consumption while ploughing was about 67kg/ha.

The tractor was a three-wheel design with a single wheel at the front, and the four-cylinder engine was designed to produce 25hp. However only two examples were built before Summerscales ceased trading in 1920 because of financial problems.

Garrett was one of Britain’s oldest farm machinery makers with production starting in the 1780s, and it became one of the most successful of the agricultural steam engine manufacturers with a thriving export business.

Development work on a steam tractor to replace its traditional traction engines started in about 1915 and the result was the Suffolk Punch, named after the popular heavy horse breed.

Production started in 1917 which, unfortunately, was the same year Henry Ford started making his Fordson Model F – the tractor industry’s biggest success so far with production peaking at more than 100,000 a year.

Garrett designed the Suffolk Punch with the driver at the front, providing an excellent forward view but poor rear visibility (the coal-fired boiler was at the back). 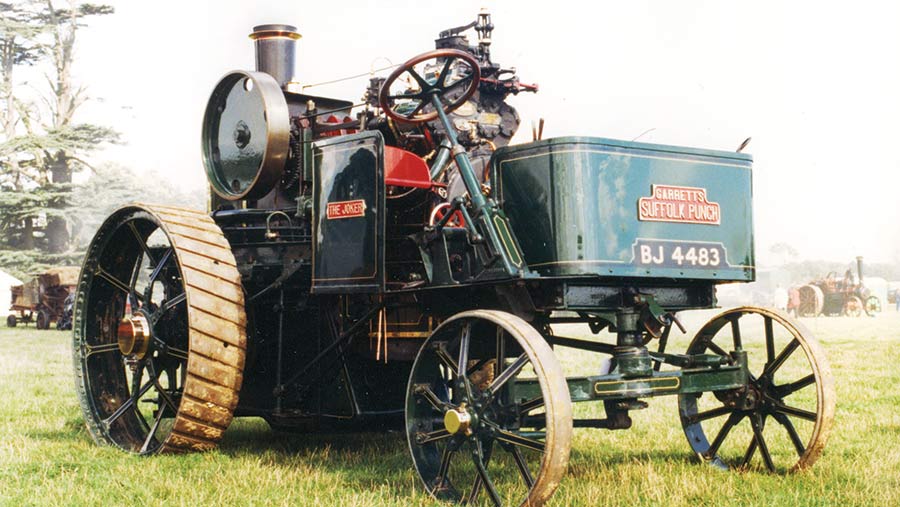 The original plan had been to develop the Suffolk Punch as the basis for a tractor and as a steam-powered wagon for general haulage, but the project ended in 1920 after the last of the tractors had been sold.

If there was a prize for the most powerful British built steam tractor in the 1920s the winner would be the Rhinoceros, one of a series of steam-powered tractors built by the Shrewsbury-based Sentinel company.

Sentinel’s biggest success was making steam-powered trucks for road haulage, and its tractors were developed from steam wagons.

They were available from 1924, with most customers based in Africa. The tractors were initially all coal-fired, with oil burning available later, and Roadless tracks were a popular option. 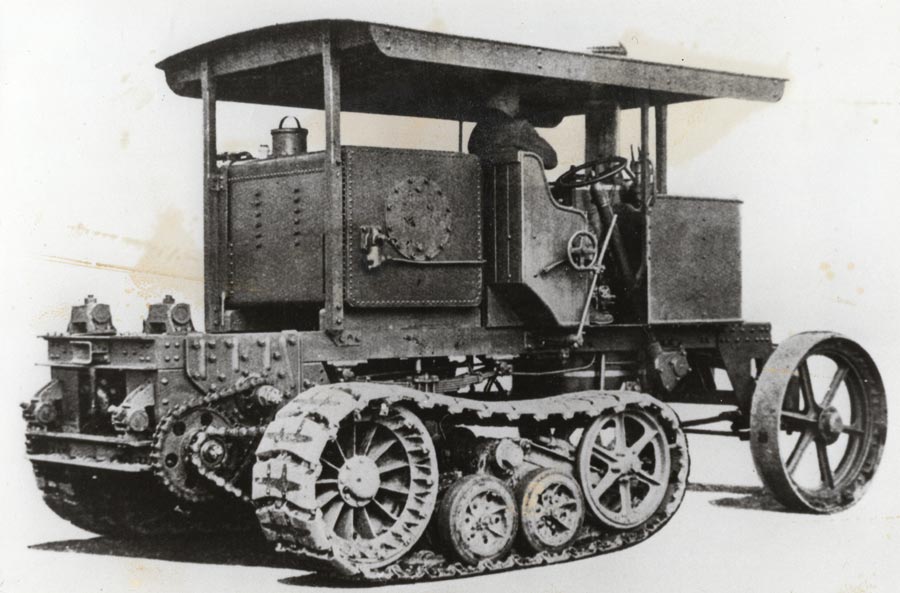 A Sentinel steam tractor built in the 1920s, fitted with Roadless tracks

About 30 of the Sentinel steam tractors were built, including the final version introduced in 1927 and known as the Rhinoceros, with design features including front and rear water tanks providing almost 1,200 litres of capacity.

Since then, revival attempts have attracted little interest.

A new 100hp steam tractor announced in 1931 by the Foden company, one of Britain’s leading truck manufacturers, was claimed to be the world’s “most powerful and economical agricultural tractor”, but only three were sold.

In the 1970s, a British engineering team designed a simple, low-cost steam tractor fuelled with firewood and designed to bring power farming to developing countries, but it failed to attract commercial support.

There are currently plenty of environmental and financial uncertainties about fuel policies for the future, but a steam revival for powering farm equipment does not appear to be high on the list of options.