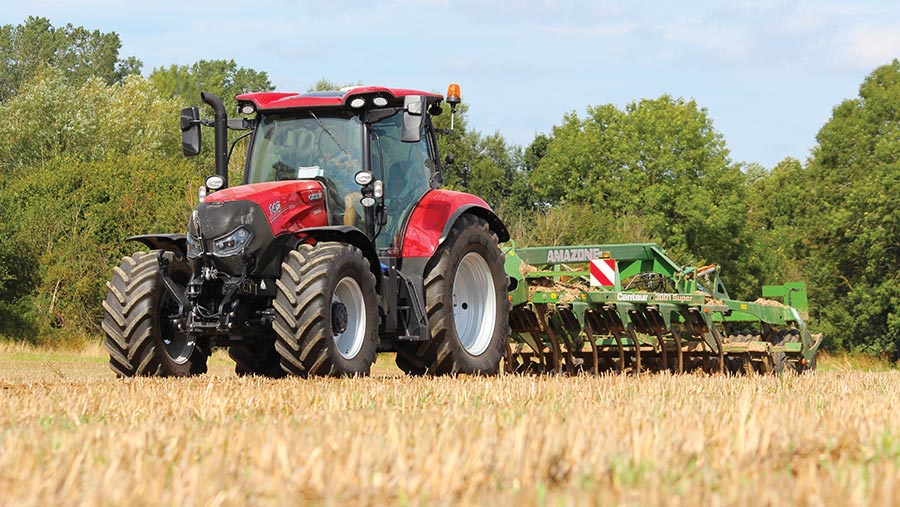 Double-clutch gearboxes have long been a must-have for Audi’s slick-shifting saloons, but the DSG concept has now found favour with farmers looking for similarly snappy acceleration in their tractors.

John Deere was the first to that particular post, unveiling its Direct Drive system in 2012 to wedge neatly between the immortal Auto Quad semi-powershift and the firm’s Auto Powr CVT.

Its dual-clutch format provides many of the desirable driving characteristics of a stepless box – lower revs, less noise and fewer clunky range shifts – but the mechanical format means operators retain a degree of input as to how the three ranges and eight speeds are managed.

Yet despite its obvious perks, the greater cost compared with the Auto Quad and the relatively small financial hop to the super-smooth CVT version means demand has remained modest.

That hasn’t been enough to deter CNH from getting involved though, and it pulled the wraps off its own three-range, eight-speed gearbox two years ago.

Designed in Case IH’s Austrian stronghold and built in Antwerp, it is badged Active Drive 8 (or Dynamic Command for New Holland) and can be ordered on all Maxxum and T6 tractors with power outputs from 116hp to 145hp.

It isn’t yet available on anything bigger, but we can expect to see it climb a power bracket to replace the Puma’s elderly 19-speed powershift in the near future.

The launch of the Active Drive 8 means there are now three gearbox options on the Case Maxxum price list – the four-range, four-speed Active Drive 4 that remains the most popular choice, along with the new AD8 and the CVX Drive.

The double-clutch concept is now a pretty well-established method of delivering sharper gear shifts and, in the case of tractors, reducing the frequency of ponderous range changes.

It uses a pair of shafts in a single gearbox housing – one side carrying the odd numbered gears and the other the evens – that are engaged by separate clutches so that the next cog can always be preselected.

Carefully placed sensors (predominantly in the throttle body) help it make an educated guess as to whether the shift is likely to be up or down.

The upshot of this is that the changes are zippy and there’s practically no loss of drive to the differentials as the clutches work their magic.

Is it more efficient?

Following the launch of the AD8 gearbox, the Maxxum was packed off to the German Agricultural Society’s independent DLG testing station for a thorough examination.

There, it delivered the lowest average fuel consumption of any four-cylinder tractor in the facility’s infamous Powermix test.

This replicates the workloads of arduous field tasks including ploughing, cultivating, mowing, muckspreading and baling, and the final fuel read-out was roughly 9% lower than its nearest competitor.

It wasn’t a massive surprise because FPT’s four-cylinder engine has always been an efficient performer but, naturally, Case attributed much of the success to the new transmission.

The gearing is particularly conducive to frugal fieldwork as most heavy tillage takes place in a pretty versatile second range that stretches from 4.3kph to 18.1kph, and means there are very few instances that a slow and disruptive range shift is necessary.

The tillage-focused auto mode will see the tractor sidle up and down gears within a range. It responds quickly enough when pushed to its limit, but it’s just as easy to deal with things manually.

Those with specialist operations in mind can also order creeper speeds, but the extra cost probably makes the CVX a more prudent investment.

On the road, the auto setting will work through the top two ranges because the break in drive as it swaps from B to C is less telling. It’s useful, too, as having so many powershifts makes for a busy thumb.

Case has buried a stack of other functions in the screen, though the laborious navigation layout means drivers have to hack through a dense jungle of software to locate them.

Of particular interest is Active Clutch, where the brakes slowly disengage the clutch to all but retire drivers’ left legs.

Most well-specced tractors in this power bracket now have it, but Case’s version allows the operator to alter the sensitivity of the pedal. We cranked it up to the most severe setting, but still found the brakes spongey and ineffective, particularly when decelerating from 50kph.

The other handy facility is the pompously-named Auto Productivity Management. This allows a target work speed to be set and leaves the tractor to determine the most suitable relationship between engine revs and gear selection.

All but one member of the Maxxum range carry FPT’s solid 4.5-litre four-cylinder, rated in this case to 145hp but boosting to 175hp when there’s an adequate power sap through the pto or hydraulics, or above 18kph. The end result is a decent power-to-weight ratio.

The anomaly is the 6.7-litre engine in the 150, which is an unusually low-powered six-bore shoehorned into the same chassis.

As for the boring, but necessary, emissions details; there’s no particulate filter maintenance, but AdBlue use averaged just under 7% in the DLG’s fieldwork test.

The convenience of having an eco/power sliding control on the armrest also meant we made use of it.

As much as the fuel saving is undoubtedly satisfying, the more immediate motivation was to reduce engine noise and drift smoothly up the gears on the return leg of a haulage job when hard revving wasn’t required. With a full load, the exhaust brake comes in handy for deceleration, too.

Time for a new cab?

As part of the AD8 launch, Case reorganised its Maxxum range to help distinguish between the transmissions.

The new gearbox is only available on Multicontroller models – those that have the button-laden armrest, electric spools and such like. However, even the cabs on these versions are beginning to feel outdated, too small, and far dingier than much of its competition.

Change here is likely to be fairly imminent and the new Magnum gives us a pretty good indication of what to expect.

For basic functions, the setup is uncomplicated, and the handstick arrangement is better laid out than the New Holland equivalent. Despite its age, the combination of cab and front axle suspension makes it a comfortable place to sit.

Case tends to target a pretty broad range of buyers, so the cabin can be adapted to suit all spec levels. That means there is plenty of opportunity to scale back on price, which is pretty important given the £40,000 difference between the most basic Maxxum 145 and the one we tested.

In fact, Case says that many buyers still go without a screen – a cost-effective move if it’s not required for guidance or Isobus. It’s not a great loss as integration is poor – the nature of having a bolt-on arrangement – and doesn’t offer many additional functions.

That said, the A-pillar display (redesigned on the new Magnum) is pretty archaic and no easier to deal with.

Those that do go the whole hog on spec options can run Isobus 3, which allows an implement such as a baler to take control of the tractor and manage things such as forward speed, hitch position and the hydraulics.

Other useful functions include an adjustable steering ratio, which can trim wheel-twizzling to a single lock-to-lock turn. We found this useful as part of a headland management sequence when ploughing, but it will also save arm ache on loader work.

There’s also Accuturn, which combines auto steering with headland turn functions to complete the entire headland manoeuvre on one touch of a button. 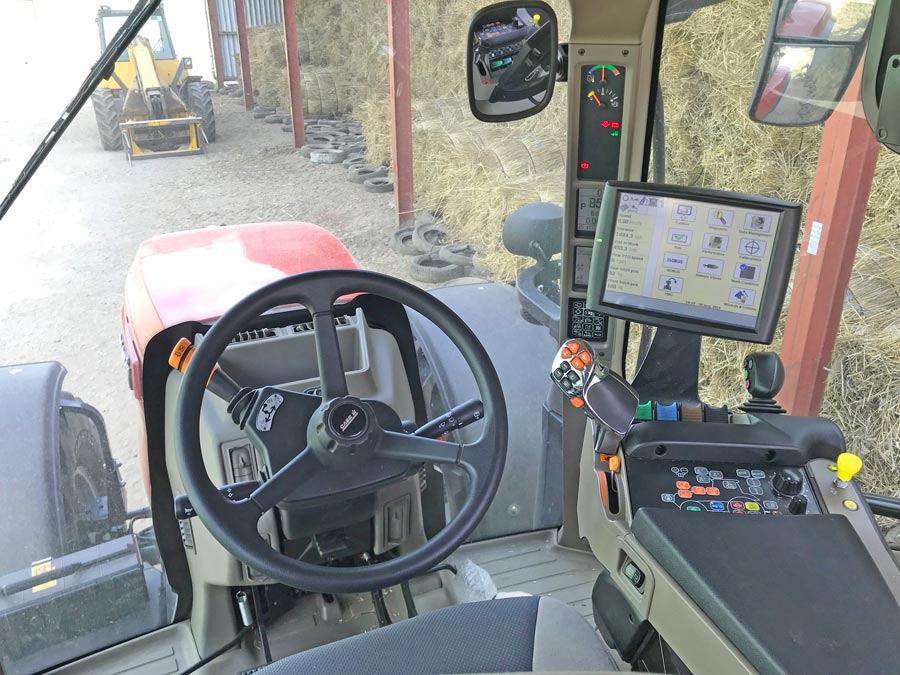 There’s little to dislike about Case’s slick-shifting eight-speeder and it seems customers agree, with the new gearbox outselling the stepless CVX and offering genuine competition to the time-proven 16-speed semi-powershift.

Impressive fuel efficiency and snappy gearshifts add appeal over the basic box and we like how easy it is to adjust the shifting point on haulage jobs to suit the load on the drawbar.

The obvious downside is the cab and integration of the screen; the latter a particular challenge when building a tractor that appeals to all budgets.

Our test model had a list price of £125,000 which, for 145hp, makes it pretty expensive. With that in mind, it’s no surprise that both Deere and Case’s most basic transmissions remain their biggest sellers in this power bracket.