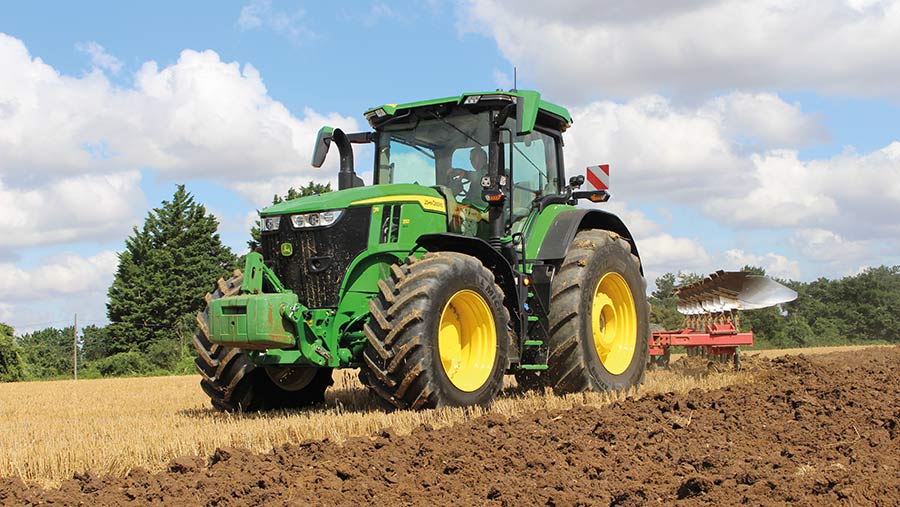 Not long ago, 350hp was the reserve of tracklayers and equal-wheeled prairie monsters strictly employed on tilling and drilling duties, but a new breed of high-horsepower conventional wheeled tractors is now taking over, bringing with it a far broader skill set.

See also: Ultimate guide to buying a tractor in 2021

One of the pioneers in this area was Fendt with its 939, which is the number one choice on many big arable farms where its employment can swing from carting grain one day to drilling the next.

Introduced in 2010, it is Fendt’s most sought after 900-series tractor and accounts for about 40% of the 100 units sold annually – good business, which hasn’t gone unnoticed by the competition.

Massey Ferguson, Valtra, both CNH brands and Claas now have machines that closely mirror the 939’s power and weight stats, but only now has John Deere tabled a serious contender – its new flagship 7-series model, the 7R 350 Gen 2.

Previous 7-series tractors struggled with reliability issues and none of the older models could match the power packed by the 939.

However, Deere now has a stronger hand, having rid itself of historical engine gremlins and added the customisable Command Pro joystick, which itself shares plenty of similarities with the one fitted to Fendt’s Marktoberdorf-built tractors.

The 7R range contains five models, as before, but the smallest 7R 250 has been dropped to make space for the 350.

There are rumours that the middle-of-the-road 7R 270 could also find itself on the chopping block – if so, it would trim Deere’s 7R range to just a quartet, starting with the 7R 290 and headed by the new flagship 7R 350 featured in this test. 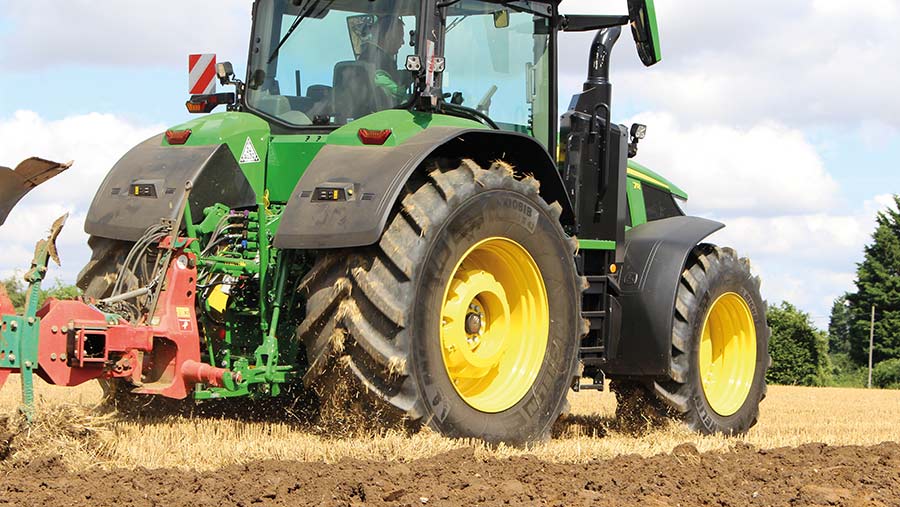 The biggest change from outgoing 7R tractors is the new cab that also features on 8R and 9R variants, and more recently on the big 9Rs. It is likely that the more popular 6R range will follow suit in the future, although the design will have to be adapted to work within the smaller frame.

Automotive firm BMW was drafted in to help Deere sculpt new styling and bring in a few car-like luxuries.

The exterior, for instance, has taken on a sleeker appearance that tidily integrates up to 22 LED lights, rather than having them plonked on the outside, as was the case before.

Other neat external additions include built-in LED road transport beacons, which sit tight to the cab and reduce the overall height so there is little chance of clunking them on overhanging branches.

And anyone who has suffered a light-fingered trespasser taking a liking to their Greenstar hardware will be pleased to see the Starfire 6000 receivers are now integrated into the roof.

However, this does mean they are no longer transferable between machines.

These new domes feature a 10min-quicker “pulling time” to achieve 100% signal and accuracy, compared with a standard 6000 receiver.

There is still the option of running a transferrable dome, which Deere says it will continue to make as it has a healthy share of the retrofit market.

We had a few issues setting up the brand-new machine, so the ability for dealers to connect direct to the screen in a matter of seconds and troubleshoot issues can save hours of downtime.

Three correction signals are still available, with SF1 being the standard and offering 15cm accuracy.

SF3 can get users down to 3cm, while the most popular RTK option is 2.5cm repeatable – about 80% of new tractors leave the factory with this.

A small but handy change sees the door handle now accessible from the ground, saving the operator having to clamber halfway up the steps before swinging it open.

The rungs have also been altered to offer wider access than before, although with five steps up to the cab you won’t want to be hopping in and out too much. 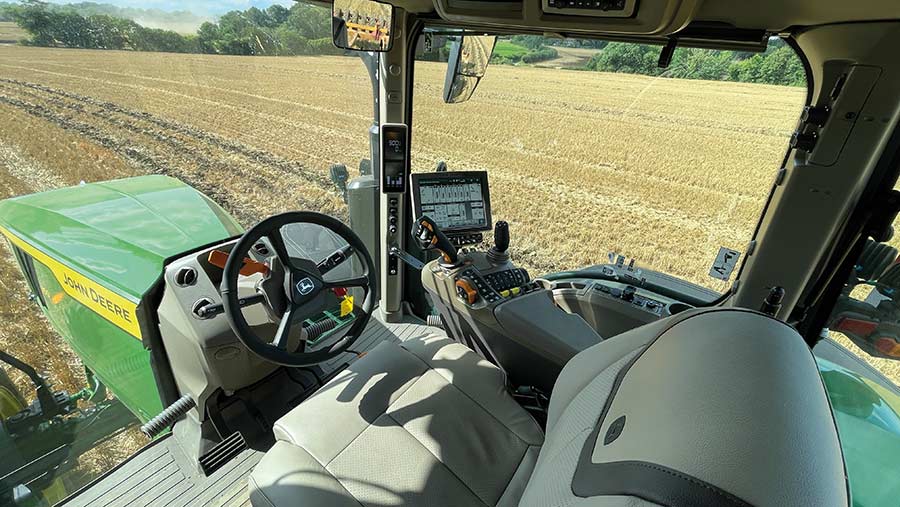 Current users may think Deere’s previous 7R cab was the last word in comfort and technology, but somehow the company has managed to take it up a notch once again.

Most obviously, the slightly drab 1980s brown colour scheme has been replaced with a more eye-pleasing grey offering.

Our test tractor came in top-spec Signature guise, which includes full leather, LED light packages, auto shut-off and the like.

The new Active Comfort Seat has been tweaked, too, with all hydraulic components removed and replaced with a fully electronic setup to combat a few issues the firm had noticed with the old design.

Inside the left-hand armrest are seat settings, including two massage functions, a brace of heating and cooling powers, and lumbar support.

The seat has 43deg of swivel, with the Command Arm neatly sneaking past the steering column and side panels. 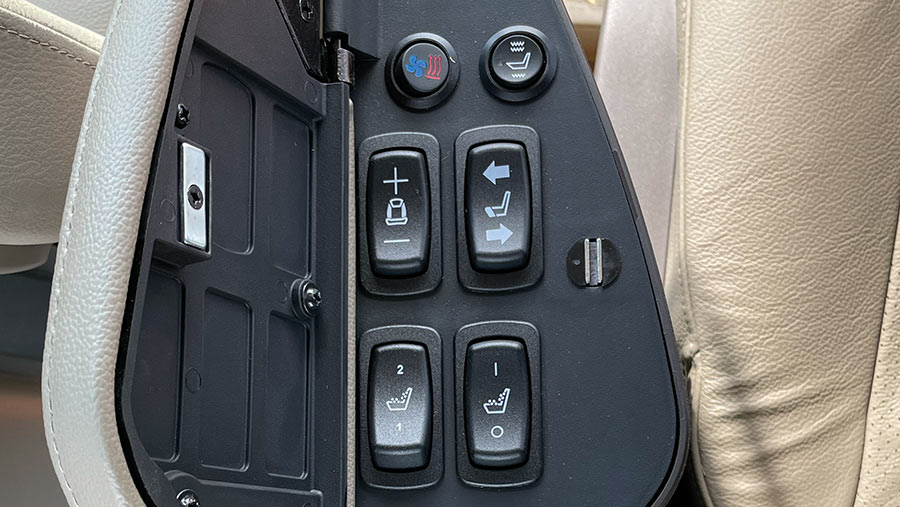 A redesigned steering column features additional vents for heating and cooling compared with the older models, while the indicator stalk now requires just a light press to activate a three-wink mode – just like most modern cars. The heating and ventilation system is now behind the seat, rather than in the roof.

There is no virtual dashboard, which has been a notable part of recent Fendt, New Holland and Case IH redesigns, but we like the unobstructed A-pillar design that Deere has used for years.

And the 4600 Command Center touchscreen is about as polished as it gets. Apart from a slight reshuffle of spool valves if the Command Pro joystick box is specified (£896, and an option that more than 90% of Waterloo models are built with), there is little change here. 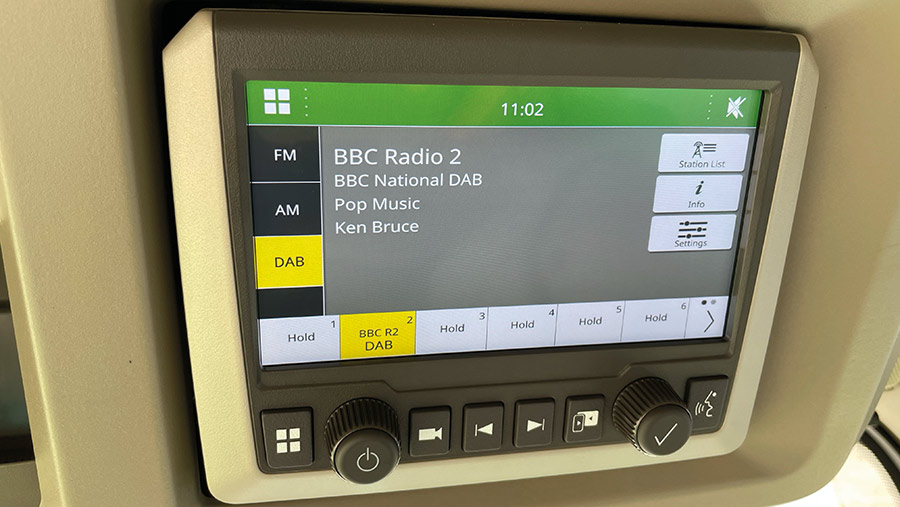 Starting is now tip-key, so there’s no holding it in position while the engine cranks over, and the left-hand shuttle stick is a return-to-centre design, rather than gated as before.

Park position comes by way of a push button on the Command Arm.

In the roof is a new 6.5in touchscreen radio display that makes phone and audio connections simpler and takes the functions out of the main screen, which was an unnecessary complication.

This smaller screen can also be mounted down by the 4600 display to run cameras on the front or rear.

Alterations under the bonnet have been less wholesale.

Still in place is the 9-litre, six-cylinder John Deere engine that powers the majority of the 7- and 8-series tractors.

This drives through an Autopowr IVT stepless gearbox, the only transmission available on the 7R 350.

However, Deere has teased a bit more grunt from the block, so rated power now sits at 350hp and maximum power is 385hp.

The company still maintains a 10% power bulge on all its machines, which means output is sustained as the engine rpm drops back.

One notable change is the relocation of these parts into the exhaust stack on the side to help with heat dissipation from the engine, which was a source of frustration for operators with heat hazes thrust in their eyeline.

We did find the size of the fuel tank a limiting factor, though.

With the 350 chugging back more than 60 litres/hr when worked hard, the 515-litre tank rarely lasted a full eight hours.

Bowser back-up was needed daily to keep it in the field and avoid time-consuming jaunts back to the yard, which is a very real downside for those planning extensive drilling and cultivation work.

By comparison, the Fendt 939 packs a 625-litre vessel into its frame.

A high seating position allows for great views, although peering over the back requires a stretch.

One frustration here is that, when backing up to implements, any slight rise from the seat to get a better look applies the electronic handbrake.

Frustratingly, the sensitivity or timing of application can’t be adjusted.

For those in the market for a dedicated cultivations machine, the 8-series Deere, with its 13.8t bulk over the 7R’s 11.4t, is still the master of the two.

Operating speed was around 8kph (just shy of where the 8-series would be) but it felt less settled and drifted up and down the rev range more frequently than the bigger tractor.

Due to its lighter frame, wheel slip was up by about 5%. 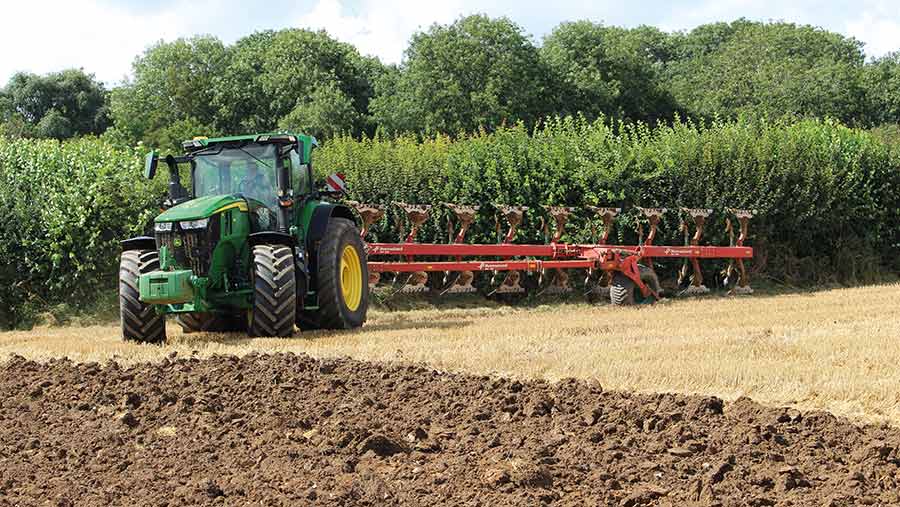 Although not a new option, the Active Command Steering II allows operators to reduce lock-to-lock turns for headland swoops and alter the responsiveness of the system.

For £974, buyers can also spec a software tweak that reduces the rocking motion caused by the plunger on a big square baler.

It uses data from the Starfire receiver and baler sensor, along with a self-learning controller, to set the Autopowr transmission to increase or decrease its speed in line with the plunger.

The 7R 350 has a great new workspace that trumps the previous generation in comfort and raises the bar again when it comes to connectivity and back-up.

However, it would be nice to have the option of Deere’s e23 gearbox, particularly if the tractor is destined for plenty of cultivation work.

Our biggest criticism, and there weren’t many, was the fuel tank capacity – most operators would be expecting to complete more than an eight-hour stint in the field before needing to fill up.

There’s no doubt that it’s a serious contender in a competitive market, but you’ll have to be disciplined when placing your order – our test model had more than £66k worth of extras.