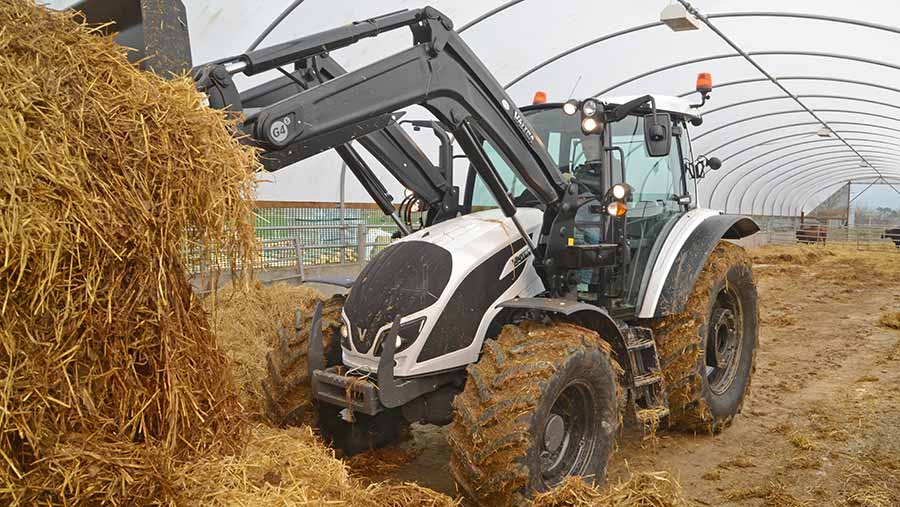 Valtra is on a relentless offensive to ram-pack its tractor ranges with near limitless engine, transmission and cab spec combinations.

The latest versions to be flung into its smallest A-series bring the alluring prospects of semi-powershift gearboxes and cabs fit for tractors of twice their power.

This base-range rejuvenation marks an abrupt about-turn for the Finnish firm, which not so long ago filled its A-series with Hattat-made Turkish imports tarted up with some Valtra cosmetics.

However, the new models remain pretty cosmopolitan. As a product of parent company Agco’s “Global” tractor programme, its major components are made all over the world and brought together to form common platform machines.

The three- and four-cylinder engines were originally designed by Sisu engineers in Finland but are now built in China, while the back-ends and gearboxes hail from just outside Paris. 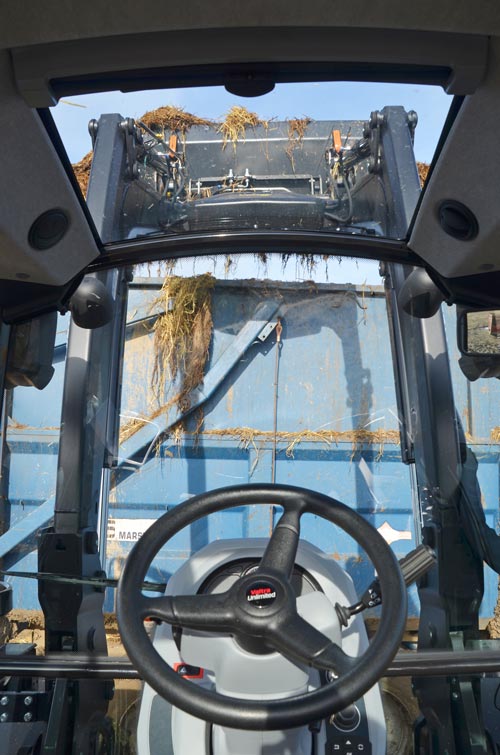 Everything then gets shipped across to Valtra’s home in Suolahti, Finland, to be assembled, before the firm’s own cabin is plonked on top.

This is, undeniably, a cost-sharing exercise with MF.

Until now, the three Agco brands have remained pretty distinct – the exceptions being Massey occasionally borrowing a few Vario gearboxes from Fendt and the Sisu-derived powerplants slowly spreading through the product ranges.

But with Massey and Valtra deciding to share mechanical components (except cabs) on their small tractors, buyers of the latter now have access to a slicker gearbox.

Previously, there was only a two-range, six-speed mechanical transmission in both brands’ low-end line-ups.

However, a recent upgrade means there’s now the option of a 16F x 16R powershifter in the middle two 100hp and 110hp models.

It offers four powered range changes and four powershift ratios and sees everything done at the push of a button, without a twitch of a left boot.

We got hold of one of the first A-series to land in the UK equipped with this new gearbox – badged by Valtra as an A104 HiTech4. 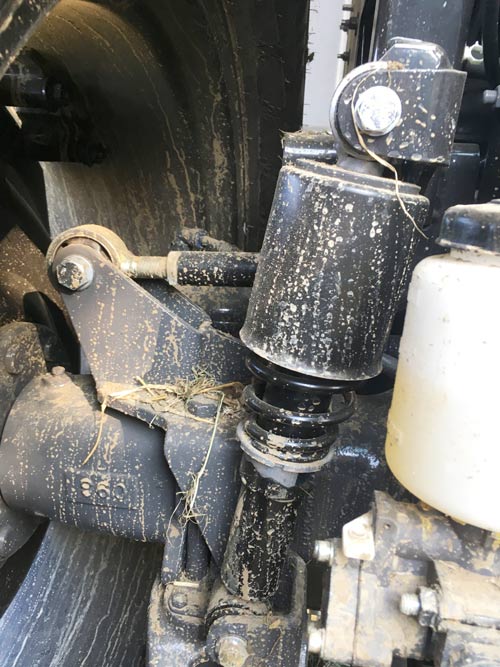 How does it drive?

As a true livestock loader tractor, we gave the Flying Finn a mix of jobs – mucking out sheds, hauling muck and some spring harrowing and rolling.

Setting off into work, the engine automatically revs up and the transmission gently eases it forwards. A pair of orange rocker-switches on the gear lever nudge through powershifts and ranges.

As with many semi-powershift boxes, there is a delay in range shifts as the clutch packs work their magic – MF Dyna4 drivers will be familiar with the anticipation/relief felt once drive re-engages.

The clumsiness of these shifts is most obvious on the road under load, where momentum is quickly lost.

While a bigger-engined tractor would probably cope, the 100hp A104 doesn’t have the low-rev torque to recover, so we found ourselves hurriedly making downshifts to keep the wheels turning.

However, the gearbox does have an idiot-proof auto function selected on a B-pillar rocker – “Auto 1” prompts upshifts at 1,600rpm while “Auto 2” does the same at 1,900rpm.

It makes for lazy driving on the road, but really comes into its own on mucking-out duties. The shifts are barely noticeable and the box responds pretty much as and when you’d naturally choose to make changes. 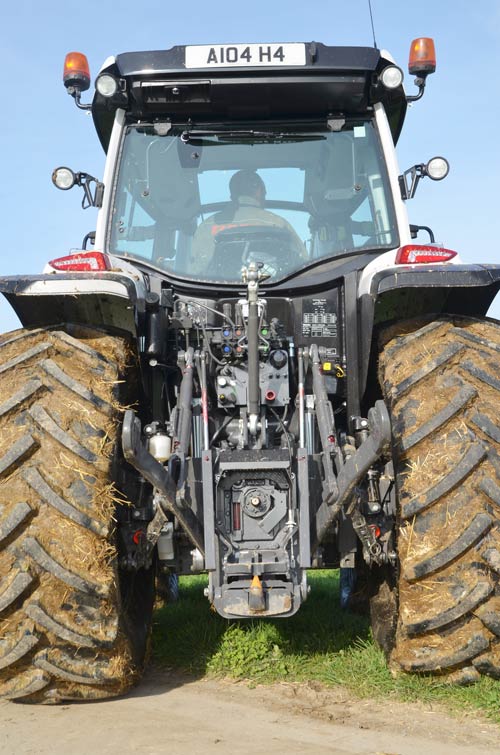 Although the options for auto shifting are kept to a minimum, drivers can tailor the shuttle and powershift settings to their own tastes.

It’s all done via a new dash screen that is much clearer than before. MF’s north-east-south-west arrowed blister button control pad is used to toggle through various menus, where it’s possible to set the aggressiveness of F/R shuttling as well as the abruptness of powershift steps.

There’s also the option to set four-wheel drive to engage for a set number of seconds each time the tractor changes direction to avoid spinning rubber.

Start-off gears in both forwards and reverse can be altered too, though it’s a bit more of a palaver.

And the clever tricks don’t end there. The A-series has a brake-to-neutral function that automatically disengages drive when the anchors are held down without any clutch pedal input.

The gearbox then eases back into action when the brakes are released.

It’s not such a rosy picture when it comes to the brakes themselves.

Trundling along at 40kph with nothing hitched on behind, we had a bit of a nasty surprise when no amount of right boot would halt the 4.4t tractor and we sailed straight past our intended turning.

Valtra says it isn’t usually a problem and must have been down to a set-up issue with our particular test machine. We’ll take their word for it.

The cabin is what clearly sets the little Valtra apart from Massey’s Global platform tractors. Built in Finland, it’s a completely different frame and interior, and has been designed specifically for loader work.

The front screen now arches into the roofline and the cross-member is a thin sliver of steel that barely interrupts the view, so operators can see any bucket, grab or fork right the way through the lift arc.

Anyone looking at a factory-fitted Alö loader would be well advised to consider Valtra’s electronic armrest controls, too.

Unlike early versions, they are fully proportional and operators can turn the suspension on/off and lock the loader for road work. We also had the luxury of hydraulic attachment pins, though this will probably be deemed an indulgence too far for many stock farmers. 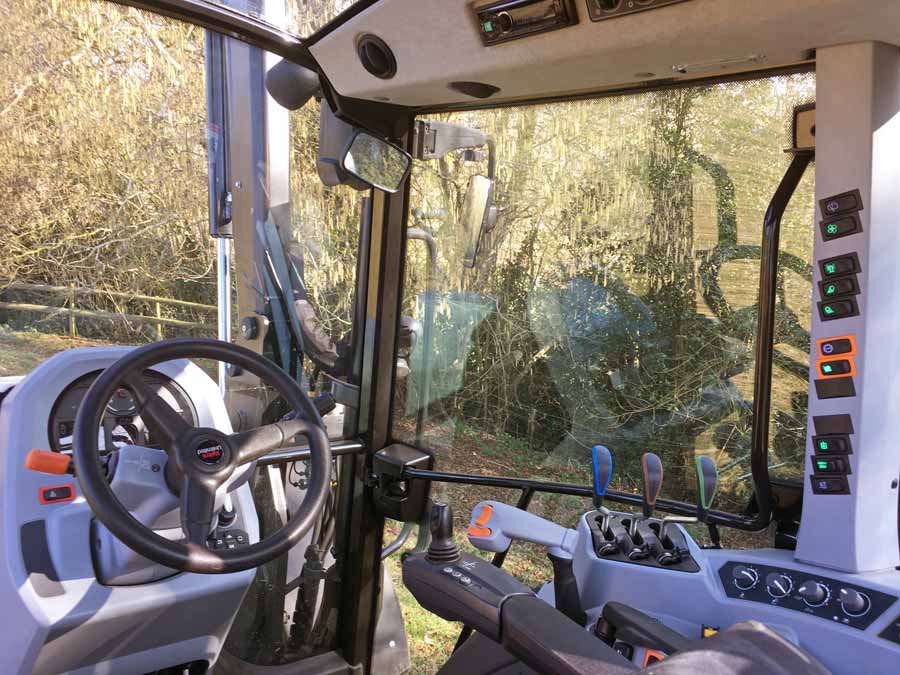 Other highlights include a simple press-and-hold throttle memory button and combined-flow hydraulics that couple together two pump outputs under 10kph for maximum performance.

There’s also a “Control Stop” feature that will shut the engine down in the event of a loss in oil pressure or coolant overheating. This is handy for those that leave tractors unattended to run a slurry pump or feeder wagon.

But the real treat comes with the addition of cab suspension. This is a simple mechanical coil-spring and damper set-up with anti-roll bars to stop cabin sway. Combined with the loader cushioning, it does an excellent job of smoothing out the ride and is an option well worth the money, we reckon.

You might expect cheap and cheerful when it comes to low-horsepower tractors from big manufacturers, but Valtra’s A-series feels like it has plenty in common with the bigger N, T and S models – thanks largely to the cab.

The addition of a four-speed powershift box has also brought a certain level of sophistication to the A-series that was previously missing.

Sadly, the A104 doesn’t quite have the muscle for serious haulage work, though. Even unladen, the 4.4-litre engine dies back on the slightest gradient, so if you want the HiTech4 gearbox then we’d favour the marginally bigger A114.

Performance is better around the yard, but traction tends to be a limiting factor when mucking out, even when shod on 600mm-wide rubber with 300kg of wheel weights.

When you take real-life discounts into consideration, the on-farm difference is more likely to be closer to £10,000.

So, if you want a tool for lighter duties like straw chopping, feeding, topping or tedding then the A-series is your kiddie. If you have some serious loads to shift, we would opt for an N.

The A-series runs from 75-130hp and covers three chassis sizes.