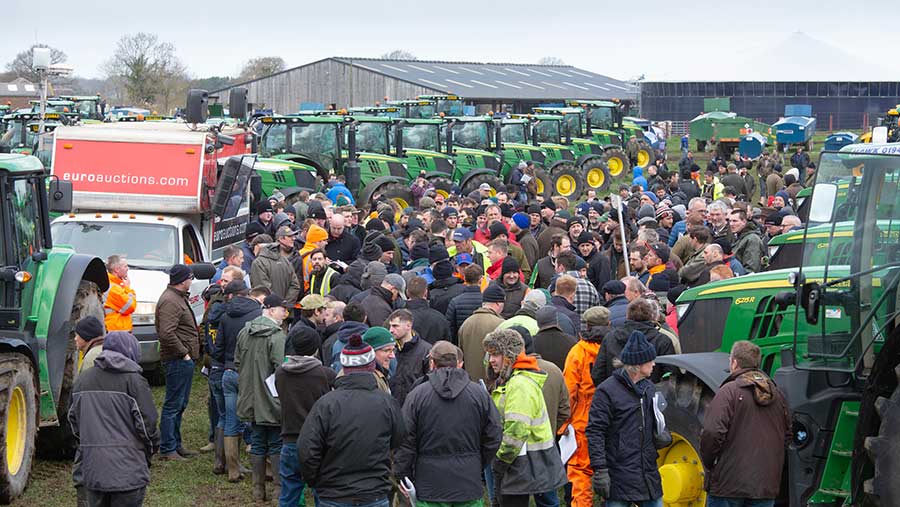 Strolling into a field littered with nigh on 120 tractors, 70 telehandlers and enough paraphernalia to fit out a county’s worth of farms is some sight to behold.

And with Euro Auctions promising to sell Hawk Group’s entire inventory without reserve, that field was also jam-packed with eager buyers seeking to pick up a bargain. Not to mention the considerable crowd of onlookers keen to witness the spectacle.

The sale of agricultural and light construction kit took place last Thursday (14 March) and featured everything from tractors, telehandlers and trailers, to pallets of spare parts and assorted workshop equipment.

This was followed by a sale at the firm’s nearby Sandford depot, which featured heavier-duty construction kit such as bulldozers and wheeled loaders. In all, it added up to more than 2,000 lots.

Bidding on the first day kicked off with 70-odd dump trucks, before a trio of JCB Fastracs kicked off the main event. Attentions then turned to the 112 John Deere tractors ranging from 130hp to 370hp, all of which were registered in 2016 or 2017.

Those expecting the volume of kit to deliver bargain-basement prices might have been a little disappointed though. A group of keen on-site bidders kept up the pace, with added interjections from internet buyers who were able to bid live.

In less than four hours all the tractors had been sold, with the total value totting up to more than £7m.

Below we take a look at how much the different makes and models went for. 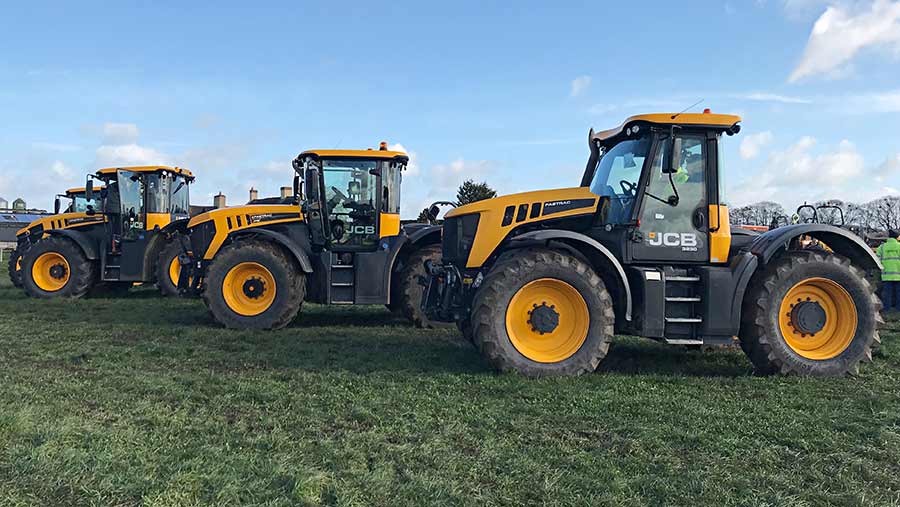 Starting the tractor bidding frenzy was a trio of JCB 4220 Fastracs that were offered as a bundle and sold to the same bidder for £80,500 each.

All were clean-looking 2017 models and the hours worked ranged from 2,586 to 3,284. Each was fitted with a front linkage and came with the usual 4000-series kit such as front and rear suspension, a Fendt Vario transmission and a Sisu six-cylinder engine developing 217hp.

Two of the models came with four spool valves, but the highest-houred machine had five on offer. 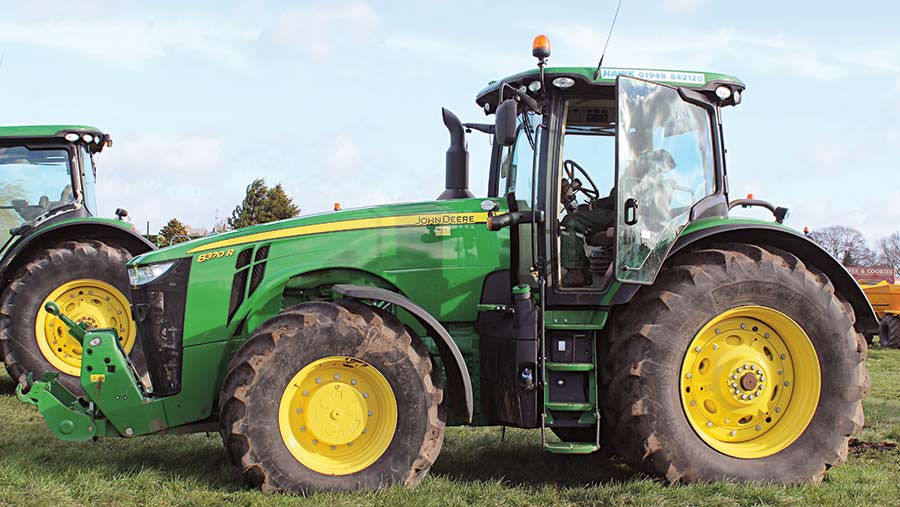 Both of the 2016 models were in tidy condition, with 2,377 hours and 2,268 hours on the clock respectively, and they came in a near-identical spec.

Next in the power stakes was a lone 2016 7310R, also featuring an Autopowr transmission and coming with a fairly loaded spec. It went for £104,000. 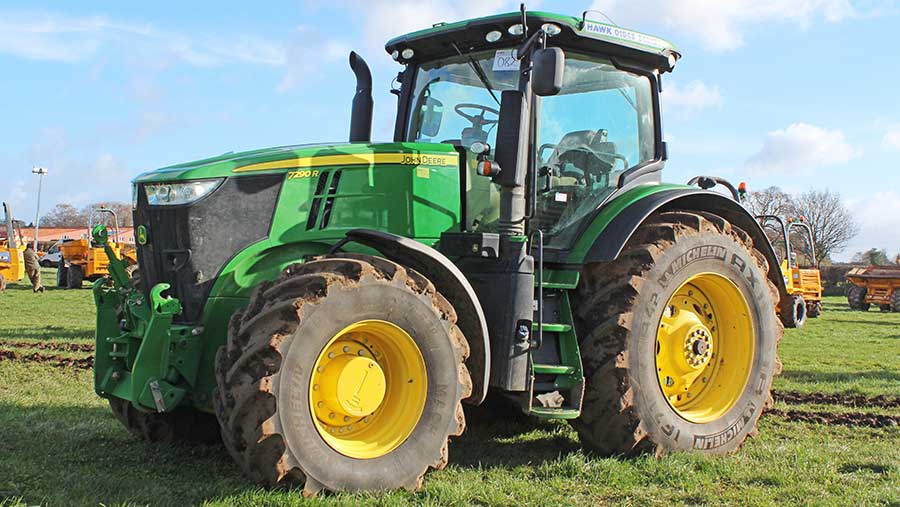 The last of the heavier-set Waterloo-built Deeres came in the form of three 7290Rs and two 7250Rs, boasting 290hp and 250hp respectively.

All were 2016 models and, like the rest of the big Deeres, came with Autopowr transmissions across the board. In general they were presented in good condition with front linkages all round and a couple having the added bonus of a  front pto. 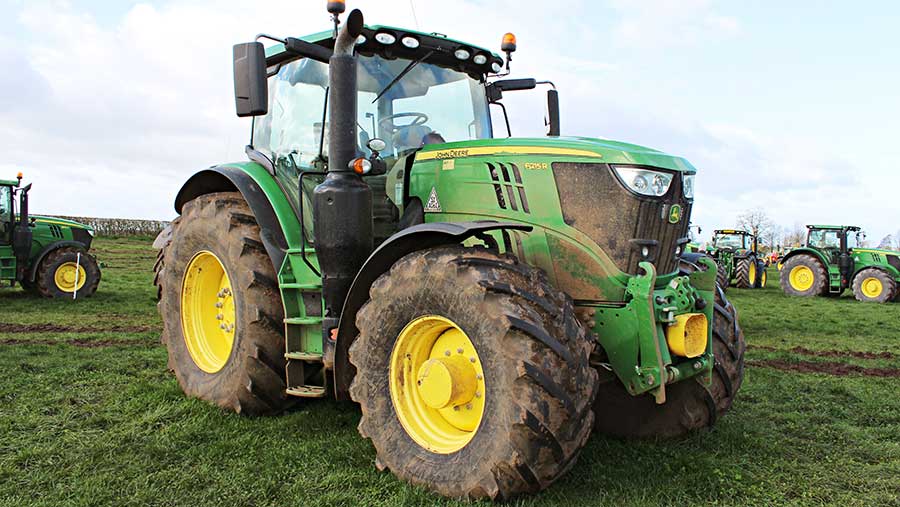 Both the cheapest and most expensive tractors came with Autopowr transmissions, but there was a difference of 1,626 hours worth of work between them (1,697 v 3,323).

Just over half the models sold were fitted with the continuously variable box, with the rest featuring the Direct Drive double-clutch transmission. Prices seemed to be governed more by hours and condition than their cog arrangement. 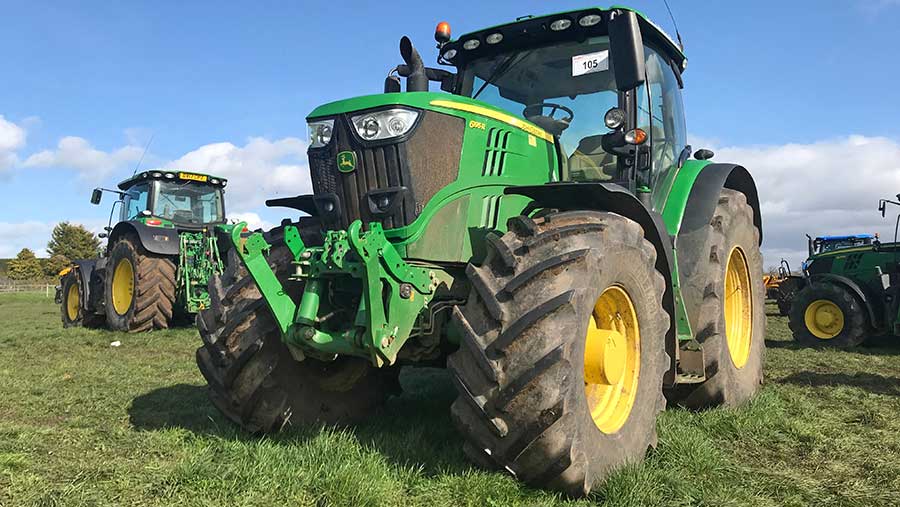 Dropping down the horsepower a little also saw a drop in price, with the nine-strong selection of 195hp 6195Rs going for an average of £75,000.

The bulk of the 6195Rs were fitted with the semi-powersift Autoquad transmission, but like with the 6215Rs, transmission type didn’t seem to be the biggest influencer on price.

At the other end of the spectrum was a slightly tired-looking model with near bald tyres on the front and 3,067 hours on the clock – it sold for £66,000.

As for the slightly lower-powered 6175Rs, all bar one of these were fitted with the Autoquad transmission. Interestingly, it was the single Autopower tractor that made the highest price of £77,000.

This had done 2,039 hours, came with a front linkage and weight block and had four spools – one more than the average on these tractors. 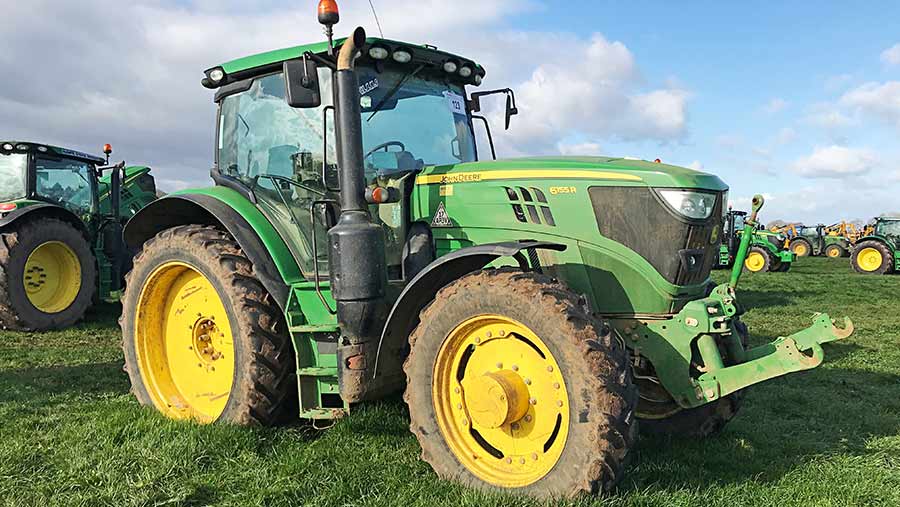 Not all tractors were presented in showroom condition, like this slightly sad-looking 6155R sitting on a flat row-crop at the rear.

However, this was just one of a whopping 35 of these mid-horsepower tractors that ranged significantly in condition and the number of hours worked.

Two examples were fitted with Quicke loaders, including the highest-houred tractor in the sale that had racked up 7,824 hours since it was registered in 2016.

It still sold for a healthy £57,000, making £1,000 more than the lowest-priced machine that had done less than half the work.

The top price of £78,000 went to one of the few Autopowr tractors, which had done 1,563 hours and came fully loaded with front linkage and pto.

Unsurprisingly, tractors fitted with a front weight rather than a linkage also seemed to trade at a lower price. 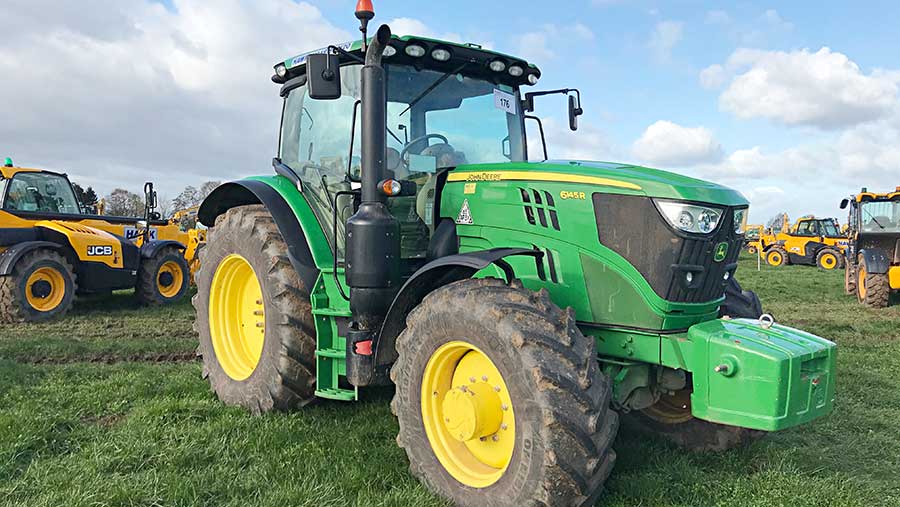 Moving down to the 145hp 6145Rs saw another slight drop in premium add-ons, with few front linkages on offer and no Autopowr transmissions.

Several of these models also came with the simpler Powerquad box, which is only capable of a 40kph top speed.

All of the 6145Rs were 2016 models, with most sporting air brakes and being Greenstar-guidance ready. 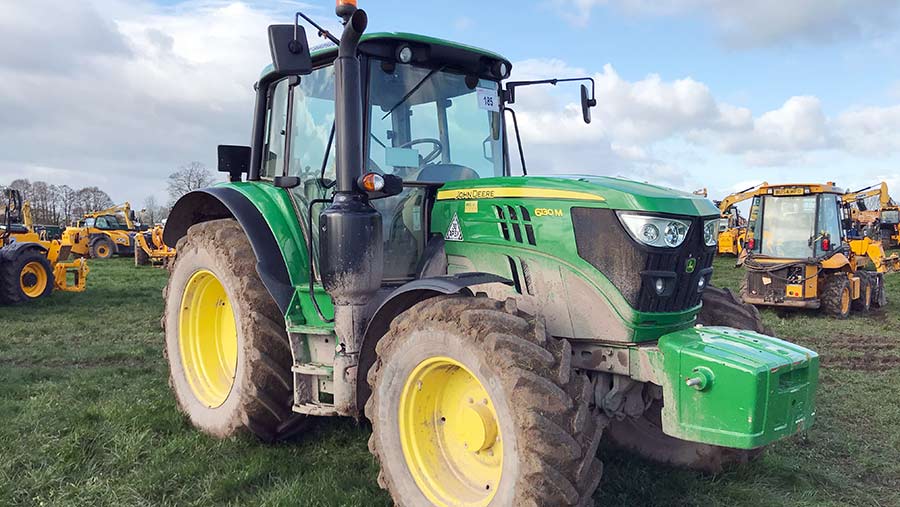 Buyers looking for one of Deere’s more basic M-spec tractors had the choice of six 6155Ms and six four-cylinder 6130Ms.

All of the 155hp 6155s came with Autoquad transmissions capable of a 40kph top speed and three spool valves. Many had a front weight included, too.

Unsurprisingly, the roughest-looking tractor commanded the lowest price of £45,000 and also had the highest hour count of 3,879.

At the other end of the spectrum was a very tidy model with just 806 hours of work behind it that made £54,000.

All the 6130Ms came with a 40kph Powerquad transmission, three spools and TLS front-axle suspension. 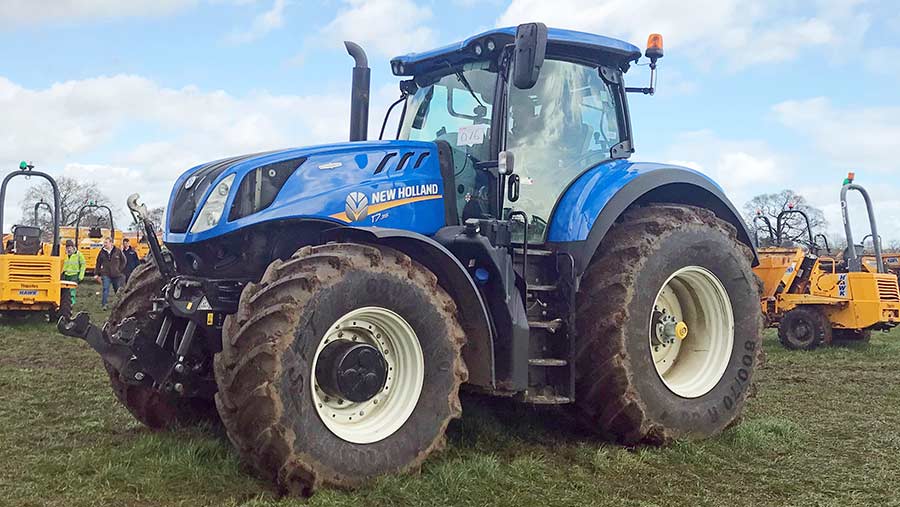 Helping to break up the sea of green and yellow paintwork were a pair of New Hollands.

At the swankier end of the spectrum was a 2017 T7.315 offering about 270hp and sitting on 1,158 hours. This clean and high-spec tractor came with an Autocommand continuously variable transmission, front linkage, air brakes and five spool valves. 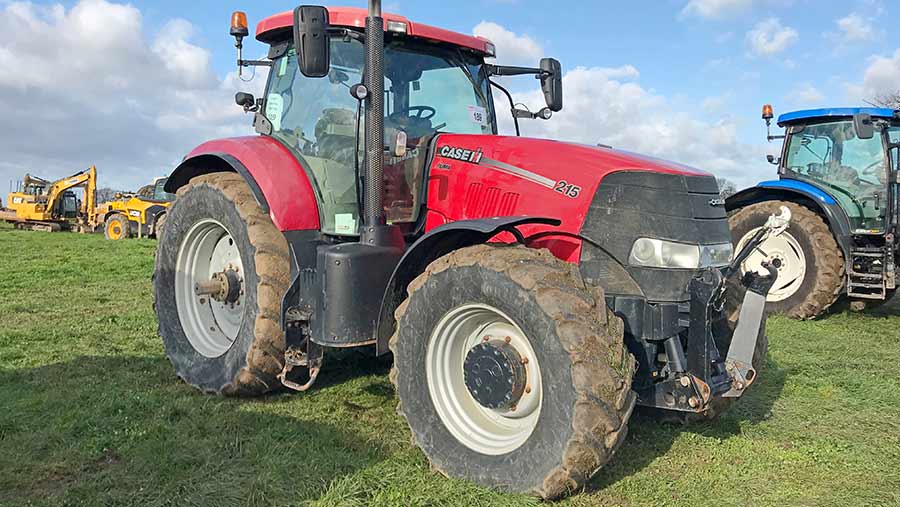 It appeared to be in reasonable fettle for its age and hours worked and came with a powershift transmission, front linkage, air brakes and four spool valves. 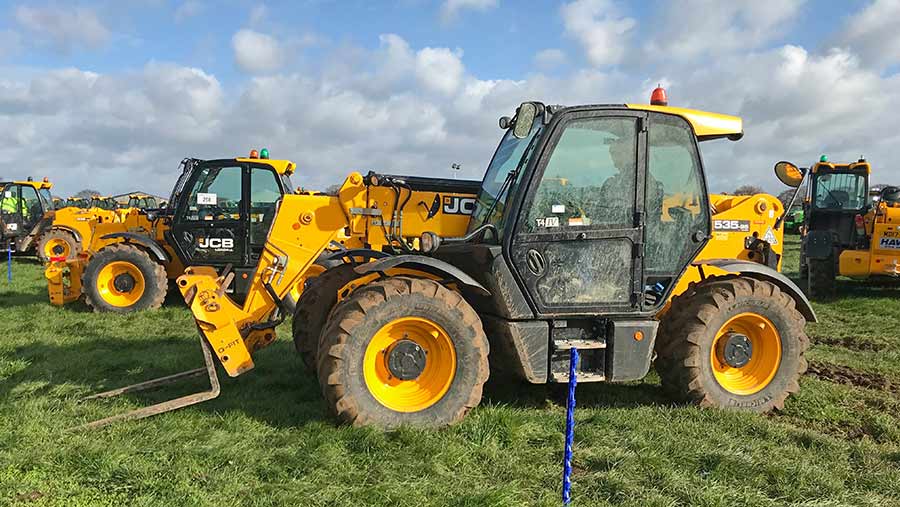 Of the 72 JCB telehanders racked-up, just a few were of agricultural spec.

And of that small bunch it was the high-spec Agri-Super models that were garnering the most interest.