The 5713 SL put in a solid, if slightly underwhelming performance, that saw it slide into last position.

Engine and hydraulic outputs were below par and the ageing cab is ripe for a revamp. However, it’s far from a bad tractor – its Dyna-6 gearbox is slicker than the Valtra’s and it’s packed with features, if you can find them. 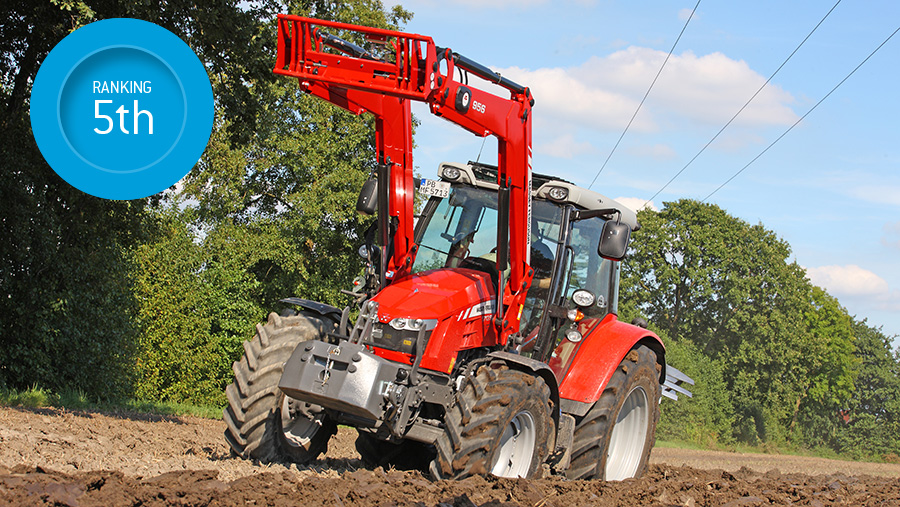 Massey’s old-school, six-pillar cab has changed very little in the past couple of decades and is surely due an overhaul soon.

It was far better than Valtra’s previous offering, but now the Finns have got themselves up to scratch it’s the most dated in the Agco stable.

This means it’s a little cramped, noisy and doesn’t have as good all-round visibility as most of the others, though the sloping bonnet does give the driver a pretty good view over the nose for loader work.

We’re not fans of the Datatronic screen either, although it offers a lot of functions.

That’s mainly because it’s hard to navigate and has been known to throw up the odd error code.

Unless you need the extra features like Isobus and section control then the tractor works plenty well enough without it, instead relying on the small dash-mounted display.

The Massey’s Gima Dyna-6 transmission is one of its strongest attributes, and when used in its simplest form the controls are well laid out and easy to fathom.

However, after years of working with it we still find it a challenge to dig into the menus and work out how to access all of its functions.

The 4.4-litre Agco engine was smaller than the version fitted in the Valtra, so it was never going to compete for power – that’s partly the penalty for getting such good forward visibility. 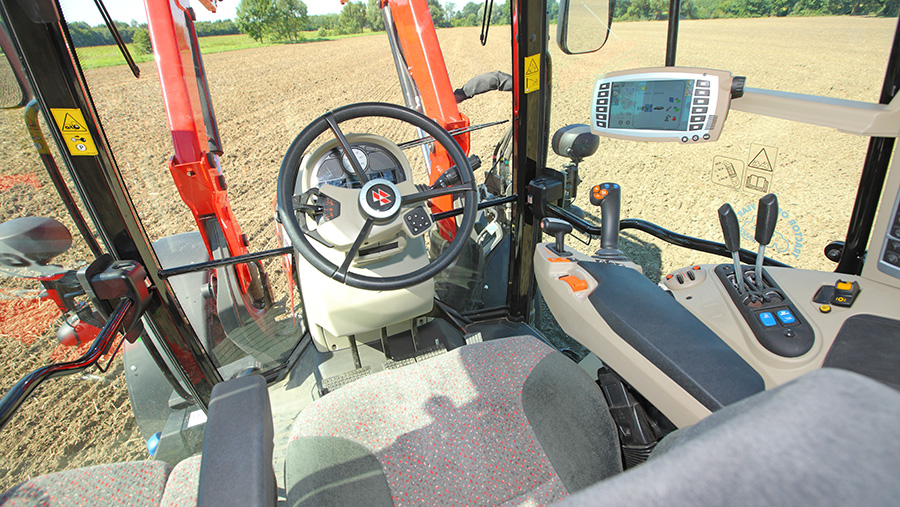 It had no boost function, but delivered a max power of 118hp, putting it a shade above the group’s average unboosted horsepower. Torque was also slightly higher than average, but so was fuel and AdBlue consumption.

However, buyers opting for a sloping nose model will be more interested in the tractor’s suitability for loader work rather than its out-and-out pulling power.

Massey is still using the Dyna-6 transmission that is largely the same as the one Claas uses in its semi-powershift tractors.

It’s a smooth operator, with four ranges that have six powershift steps in each. Depending on the operating mode it will change through all of these on the fly, although there is a break in power between the range changes.

Speed matching is also impressively accurate and there’s a good amount of overlap in the gearing for field work.

If you avoid playing around with the gearbox settings it’s a simple machine to drive, but we find the process of setting up speed cruises and the second engine rev memory unnecessarily complicated and the Valtra is actually more intuitive.

Our tractor came with the simple T-shaped shifter with a button on the side for range changes, but buyers also have the option of a slick multi-function joystick that puts most functions easy to hand. 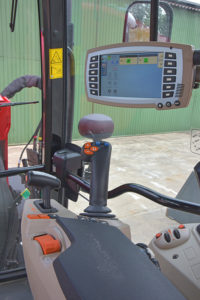 The 5713 SL recorded the lowest rear lift capacity of 4.2t, which is a long way from the 6.7t the Valtra managed to wrestle off the ground.

It also had the smallest lifting range, which could make it difficult to hoist some implements far enough off the deck.

Hydraulic performance was also below the group average, recording a maximum power of 35hp, but it delivered a higher flow rate to one valve than the Fendt and Valtra.

Considering its sloping nose and loader tractor focus, we were surprised at its 10.9m turning circle, which was bang on the test average.

Massey Ferguson offers four models in its drop-nose SL-series from 100 to 130hp, and the 5713 we tested is the most powerful of the bunch.

The 5700 range was launched at Agritechnica in 2015 and comes in two different spec options – Essential and Efficient.

Buyers can also choose from two semi-powershift gearboxes including the entry-level Dyna-4 gearbox or the slightly more sophisticated Dyna-6 we tested.

The 5713 is by no means a bad tractor, but a fairly uninspiring set of results across the board meant it slid into last place.

The Dyna-6 gearbox was probably its finest component and it has to rank as one of the best semi-powershift gearboxes out there, with slick auto-shifting, impressively accurate speed matching and a great shuttle. However, when you start playing around with the settings it can send your head into a spin.

But the biggest thorns in the Massey’s side were its sluggish hydraulic performance, weak rear lift capacity and a slightly old-school six-pillar cab. Now Valtra has brought its cabin up to scratch this is the most dated in the test, and it can feel a little cramped.

Massey’s Datatronic screen is also a black mark for us. On the one hand it offers plenty of functions, but its clunky and confusing operation means its one of our least favourite systems on the market.