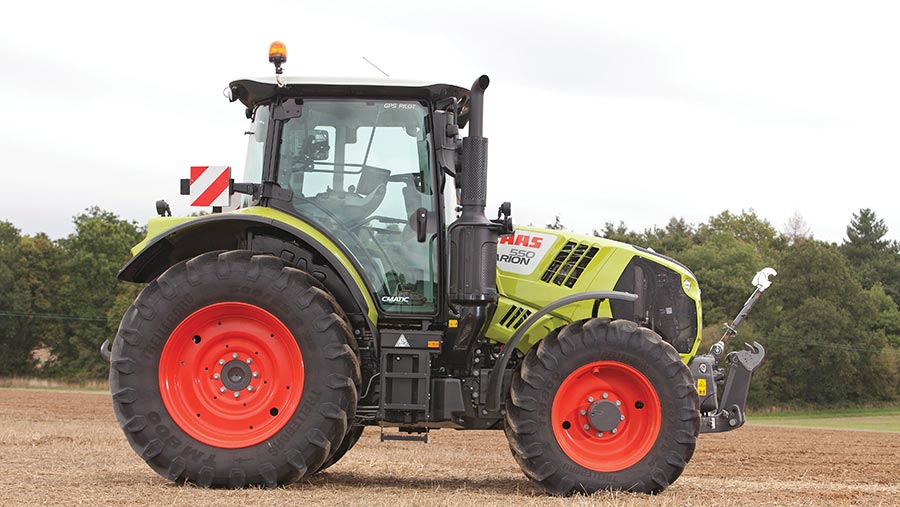 After testing it, we think it’s better suited to drilling and top work than primary cultivations.

And with dozens of switches and dials plastered around the right side of the Cebis-spec cab, it’s easy to see why farmers with a preference for keeping things simple stick with the stripped-down CIS version – particularly given the otherwise decent touchscreen monitor still can’t run a guidance system.

Watch the video of the Arian 550 in action and read the full report below.

Everything from the 125hp Arion 510 to the 445hp Axion 960 uses the same coil-sprung cab, which has been kicking around since 2012. It’s now beginning to show its age and is a rumoured target of the R&D team at Claas HQ.

Ours came in five-pillar format with a smallish door and opening side window, but arable growers can switch to a four-poster free of charge.

Access to both is clumsy, mainly because the narrow steps are routed around the fuel filter. Handily, though, the transmission dipstick protrudes just below the cab floor, giving operators no excuse for failing to check the oil level.

There’s also a toolbox within the offside steps with enough space to stash a few linkage balls and drawbar pins.

The Arion’s interior feels pokey compared with that of the Fendt, with which it shares a similar wheelbase.

Front-to-back space is in particularly short supply, but the saving grace is a convex rear window that avoids the framework interfering too much with views to the extremities of an implement.

Whip out the fancy screen, armrest and egg-shaped Cmotion joystick and the top-grade Cebis model is largely the same as a stockman-spec CIS.

The grey, plasticky interior is a little lacklustre and, though it may sound petty, it falls short of the standards set by John Deere, Fendt, and, in terms of robustness, even New Holland. 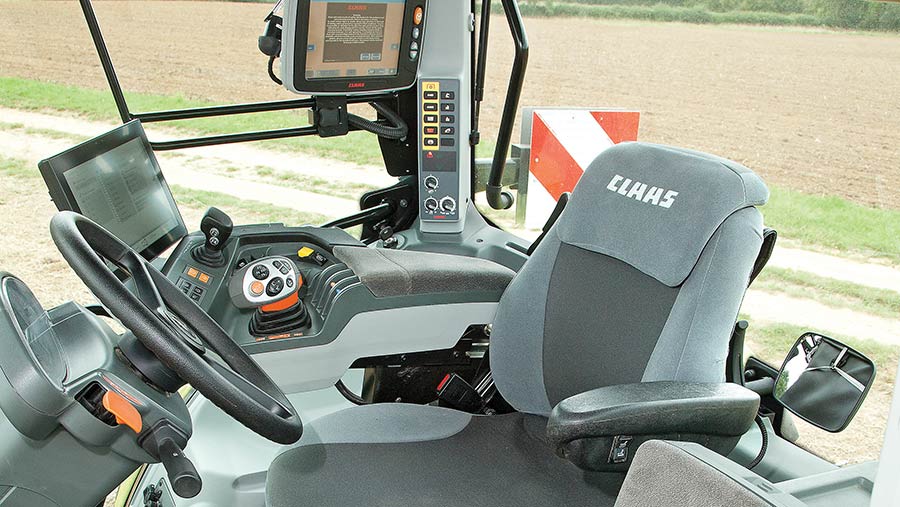 It’s easily scratched – particularly the clear dash screen – and our test model, with fewer than 500 hours on the clock, was already looking a bit tatty. Noise isn’t particularly well deadened either, with its 74dBa a touch louder than the average.

However, keen tractor drivers happy to tinker with their controls all day will no doubt enjoy the abundance of customisation options.

The Cmotion joystick – designed originally for Lexion combines – is the centrepiece, dealing with forward/reverse and whichever functions are programmed on the 10 assignable ‘F’ buttons.

It means operators can place Isobus controls, spool valves, GPS and cruise control exactly where they want them.

The obvious downside is that for uninitiated drivers, or those who simply want to be told what controls what, it can be a bit of a mind bender.

There are more than 50 buttons, switches and dials across the armrest, side console and B-pillar, so the end result is a buttony jumble. In our view, the Cebis spec layout could be improved by bunging infrequently used functions into the touchscreen.

To give less-versed operators a fighting chance of getting to grips with the controls, F-key details are displayed on the 12in Cebis monitor at start-up.

Its graphics are a bit old-hat and, irritatingly, it can take an eternity to wake up, but once alive and kicking it’s easy to track down the necessary settings.

Information is layered logically through a simple menu structure and it pretty much matches the John Deere for usability – the symbols are clear, colour coding is good and operators simply have to touch one of the details to make a change. It can also be used to control Isobus-ready implements.

However, the major downside is that it can’t display guidance maps, so anyone wanting GPS will have to fork out for an extra terminal – either the 10.4in S10 or 7in S7, neither of which work quite as slickly as the main Cebis monitor.

The full upgrade to auto-steer with 15cm-accuracy Satcor 15 correction signal adds £5,825 to the list price.

Claas has always taken a mix-and-match approach to tractor components. So, while the diddy SDF-sourced Atos has a Deutz engine, FPT powers the 400 Arions and 800/900 Axions, and the 500- and 600-series have DPS Powertech (John Deere) blocks.

Deere’s engines have always prioritised exhaust gas recirculation and particulate filters to beat emissions limits so, although SCR has since been added into the mix, AdBlue use is pretty low. That’s especially the case when the tractor is working hard and the engine is hot.

Although it means there’s plenty of poke packed into a modest frame, its 28% torque rise is relatively low and it needs to be heavily ballasted to consistently get the power to the ground – one of the downsides of its short wheelbase.

From a driver’s perspective, the most important function to get to grips with is the droop setting, which determines how much the engine can get dragged down before forward speed is sacrificed.

However, there’s a second mode, Power, that can be set to prioritise engine speed, keeping it working at the top of the rev range – around 1,900rpm – for demanding haulage jobs such as silage carting.

The beauty of these two settings is that you can toggle between them on a joystick F key, running in full power with a loaded trailer and calming things down when empty.

There’s also a fixed engine speed mode for pto work, which is engaged automatically if one of the engine rpm memories is activated.

Like all CVTs, Claas’s Cmatic setup can be driven on the pedal, with the joystick, or manually by controlling engine revs on the throttle and forward speed on the stick.

Though it uses a ZF assembly in its bigger tractors, the 500- and 600-series Arions run an EQ 200 transmission assembled in Claas’s Paderborn factory, where the company also builds gearboxes, axles and Terra Trac track units for its harvesting kit.

It provides a combination of hydrostatic and mechanical drive with two auto-shifting ranges. The basic hardware involves a stepped planetary gearbox that uses a pair of multi-plate clutches to split the power between mechanical and hydrostatic drivelines.

The drive is predominantly hydrostatic at slow speeds, but the mechanical contribution rises to roughly 50% at 10kph. As forward speed continues to increase, the two clutch shafts eventually rotate at the same pace so that they can imperceptibly change gear at 25kph, at which point the drive is almost entirely mechanical.

Although the operator, obviously, has no control over mechanical range changes, it is possible to set three virtual ranges, each of which contains a cruise mode.

This arrangement is ideal for fieldwork, where the cruise can be disengaged by dabbing on the throttle and forward speed increased to the range limit when swooping around on the headland.

Here, the relatively short 2.5m wheelbase and cut-outs in the chassis contribute to a handy 10.7m turning circle, which is 30cm tighter than its six-cylinder equivalent.

The front overhang is pretty short too, making it much easier to edge out at a T-junction on the road, and there’s the option of adjustable ratio steering for £485.

One of the biggest changes from earlier generation Arions is the move to a simpler Dana-sourced solid beam front axle.

This has vastly reduced the maintenance burden of keeping 22 grease nipples lubricated – some of which were notoriously hard to find – and, although the Carraro independent wishbones were lauded for their comfort, we found the combination of front axle and cab suspension pretty agreeable. 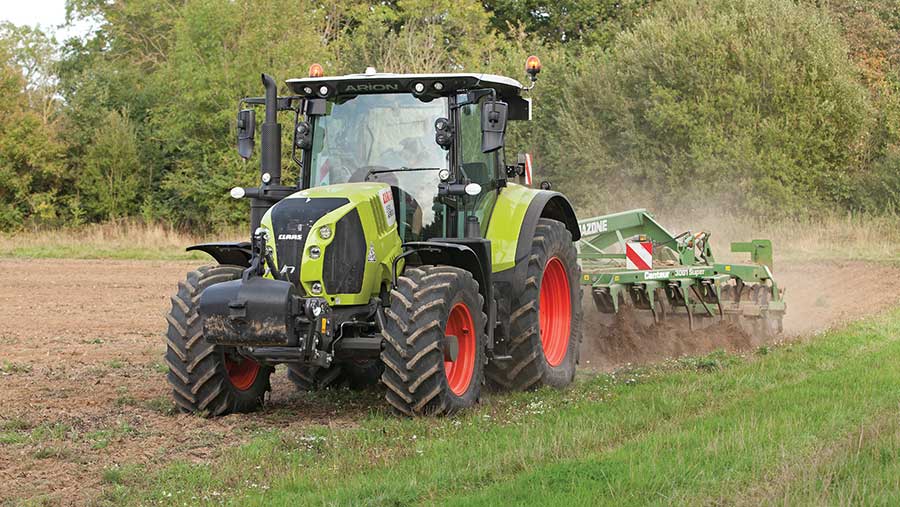 Despite being the second smallest tractor in our test (a whisker longer and heavier than the Fendt), the Arion delivers respectable lifting stats that include an 8t limit for the rear linkage.

That competes with most six-cylinder alternatives, though as mentioned earlier it needs to be ballasted well to make the most of it.

There’s a jungle of exposed pipes and wires behind the spool block, which is likely to gather dust and dirt. Though this alone isn’t a major issue, they will inevitably have to take a pummelling from the pressure washer, which may harm things in the long term.

As we found, Claas’ electronics aren’t infallible, and our tractor spent a fair amount of time laid-up because of hard-to-pinpoint electrical gremlins.

Four rear hydraulic valves are standard, and there’s a simple mechanical diverter block out the back window to direct oil to the pick-up hitch and front linkage. This, usefully, means those two functions don’t hog valuable space when they’re not required.

However, the layout of spools on the valve block is less convenient. They’re split either side of the top link, so operators will often find themselves trudging around the implement to plumb in pipes.

On the plus side, all four have quick release paddles, which makes life easier when decoupling. It’s also a doddle to set which spool is controlled on the fender buttons.

In the cab, the hydraulics have to be unlocked on every start-up using a switch on the corner pillar. Given it will be frequently used, we reckon it could do with a more prominent position on the armrest.

Claas’s Arion tractors were originally based on the Renault-derived Ares and first launched in 2007.

The latest major update to the three-model 500 series – one of the company’s biggest sellers – happened in 2012 with the unveiling of a new cab, followed five years later by the introduction of the Cebis touchscreen for top-speccers.

The price difference between the two is about £10,000 and these come in three spec levels – CIS, CIS Plus and Cebis.

Basic CIS models are only available with the powershift gearbox and offer four mechanical spools, a multi-function armrest and simple LCD A-pillar monitor. Climbing to the Plus variant adds electric spools with time and flow rate adjustment, four programmable F buttons and a 7in colour monitor.

Cebis versions costs and extra £6,000, for which you get a fancier armrest with the Cmotion control lever and 12in touchscreen.

Buyers predominantly looking for a fieldwork tractor may be tempted to make the jump to the 600 series. It overlaps with the 500s and starts with the 145hp 610, which is £139,870 in Cebis spec.

Above that comes the 650 and 660. The latter is only available with a stepless gearbox and is the sole Arion to offer an engine boost function that takes maximum output from 185hp to 205hp.