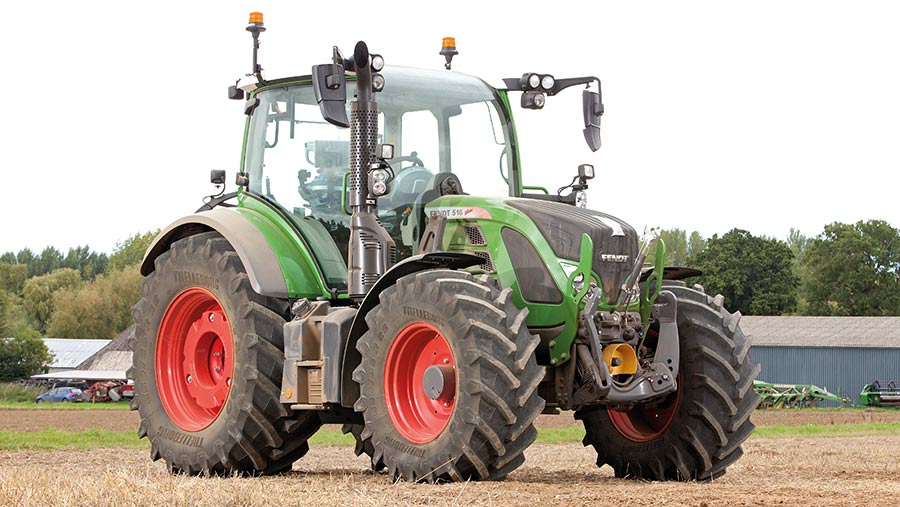 The Fendt Vario’s 516’s four-cylinder Deutz engine might be low on displacement, but it conjures up an impressive amount of power and torque from its 4-litre capacity.

It can’t quite match its main six-cylinder competitors for out-and-out pulling power, but its compact proportions, comfortable cabin and the promise of lower fuel use help offset that shortcoming.

The key question for buyers is whether they hold out for an updated control layout, which will come sometime in 2021.

Watch the 516 on test and read the full report below.

At its launch almost a decade ago, Fendt’s Visioplus cabin set a new standard for tractor comfort and sophisticated electronic control.

Since then, other manufacturers have been busy borrowing the best bits of the Marktoberdorf design, adding a few of their own twists and gradually making them better. Considering its longevity, the Fendt format still looks pretty fresh, but certain elements are showing signs of age.

It’s therefore little surprise that the firm has introduced a new control layout – dubbed Fendt One – that will be rolled out to its wheeled tractor ranges over the coming months.

This makes our test tractor one of the last to feature the current setup. And while it is more than adequate for most operators, there are a number of areas that would benefit from a refresh, most of which have been addressed in the new design.

The 10in armrest screen is a good place to start. It’s the hub for setting up and configuring the tractor and there is no shortage of options for getting it to run the way the operator wants.

The downside is that the menus aren’t that intuitive to use (compared to more recently launched screens) and it can take unseasoned operators a while to find the section they’re after.

It is also at the limits of its processing oomph, particularly when being used to run power-sapping applications such as guidance, variable rate and section control. 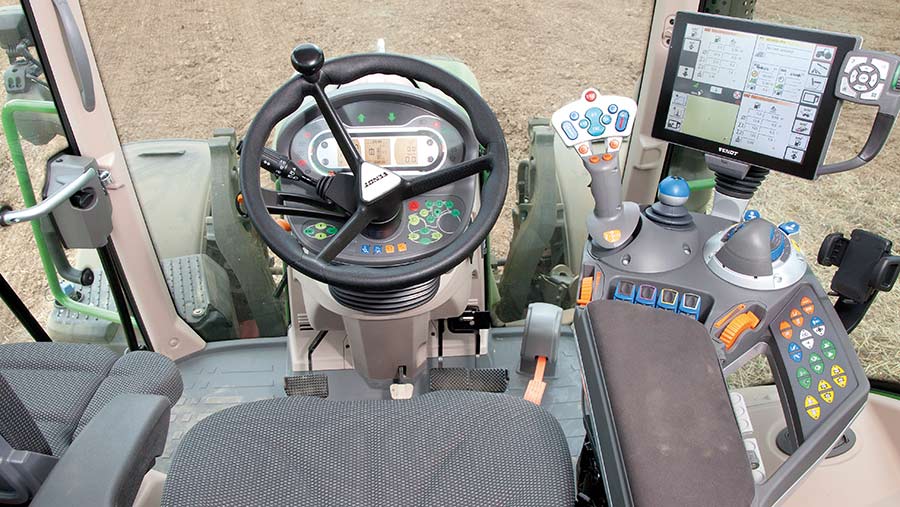 The new version will be slightly larger,  able to cope with far more information, and it has been designed so that it can accept updates in the future. Fresh software has also been brought in, with a layout that seems to have significantly simplified the process of finding and altering settings.

Central to the current tractor’s controls is the upright joystick, which handles speed and direction changes, engages a pre-set cruise, and has buttons for headland management and a couple of spools.

It’s a clever design and works well, but it’s not the most ergonomic thing to hold. Plus, if the operator wants to alter the cruise setting on the move, they have to turn a dial on the side of the screen or delve into the menus.

The update will also address these niggles, with a contoured profile that aims to make it a more comfortable place to rest one’s hand and an integrated wheel for adjusting the cruise speed.

Buttons for activating spools have been replaced with proportional controllers, which makes them more useful.

Other changes will include a new optional hydraulic cross-gate joystick (more on that later), a 10in monitor replacing the conventional dashboard and an optional third screen that drops down from the cab roof.

The left-hand reverser on this tractor is still a small tab, which we’ve never been particular fans of, and there’s the usual air handbrake on the side of the console. Both of these will be staying the same when the refresh kicks in.

As for the cab frame and the rest of the interior fitments, these will be unchanged next year. This is no bad thing, as the large single-piece windscreen gives good views to the front of the machine, it’s a quiet and comfortable place to sit, plus it’s easy to hop in and out of.

The 516 we tested was delivered in the top Profi-Plus spec, which has all the bells and whistles, but according to Fendt many 516 tractors are sold in Power-Plus spec. This has a smaller 7in screen, a lower-capacity hydraulic pump and Isobus is an optional extra.

Fendt’s most popular six-cylinder by far is the 237hp 724, and in the UK it sells very few of the entry-level 716 that roughly matches our John Deere 6155R benchmark.

Instead, it focuses on the high-horsepower four-cylinder 516, which develops a maximum power of 169hp and 687Nm torque from its Deutz engine.

Historically, Fendt has had relatively limited success in the UK with four-pot tractors – mainly selling to the fresh produce sector – but it says 500-series sales are now gathering momentum.

Part of the reason is that the firm claims the 516 easily matches the six-cylinder 716 for power and torque, with the added benefits of dainty proportions, lower AdBlue consumption and a slightly keener price tag.

With a capacity of just over four litres, the four-cylinder Deutz engine is a particularly small unit to squeeze 169hp from. On ploughing and cultivating duties we were suitably impressed with how well it hung on, though the tractor’s lightweight build means it relies on heavy ballast to maintain traction.

Part of the reason for this performance is that it hits its peak torque at just 1,450rpm, which is pretty low for a small engine.

The Vario transmission and TMS setup also do a decent job of making the most of the engine’s output, and unlike a tractor with a mechanical transmission, you don’t notice the engine labouring to the same extent.

The main clue to how it is performing is how close it manages to get to the target speed when working. Here it seemed to give the best performance of the two four-cylinder tractors, but it didn’t quite have the legs to keep up with the six-cylinder Deere and New Holland.

The biggest kicker for Fendt is that the Deutz block doesn’t have the reputation for reliability that Agco’s in-house engine enjoys. Some tractors have also suffered problems with the AdBlue system.

Fendt’s Vario transmission needs no introduction – it’s been fitted to production tractors since the mid-1990s and save a few technological tweaks such as TMS, it works on the same principle today.

Operators still have two unsynchronised ranges to switch between at a standstill – essentially one for field work and one to use on the road ­– and it puts strain on the transmission if it’s worked hard in range two on field duties.

Therefore, it needs a conscientious driver on the seat to make sure it’s being used correctly.

All the other tractors tested require no operator input to shift ranges, so it’s a slight black mark against the Fendt from an operational point of view. That said, the TMS tech did the best job of managing the engine revs and gearing, without us having to play around with the droop settings.

Keen drivers do have the option of adjusting droop manually from 0-30%, which governs how much the engine labours before gear ratios are lowered.

The beauty of Fendt’s CVT-only transmission policy means all of its tractors are broadly the same to drive. For most jobs, we favour pedal mode, which puts speed control on to the foot pedal. This allows for quick headland turns and the cruise control function can be used to set a constant working speed.

Depending on the job in hand, this can be activated with the joystick or put into a headland management sequence.

Stick mode gives the option of more delicate and accurate speed control for precision jobs. It’s perfectly possible to drive it in this mode all the time though, which some operators swear by. 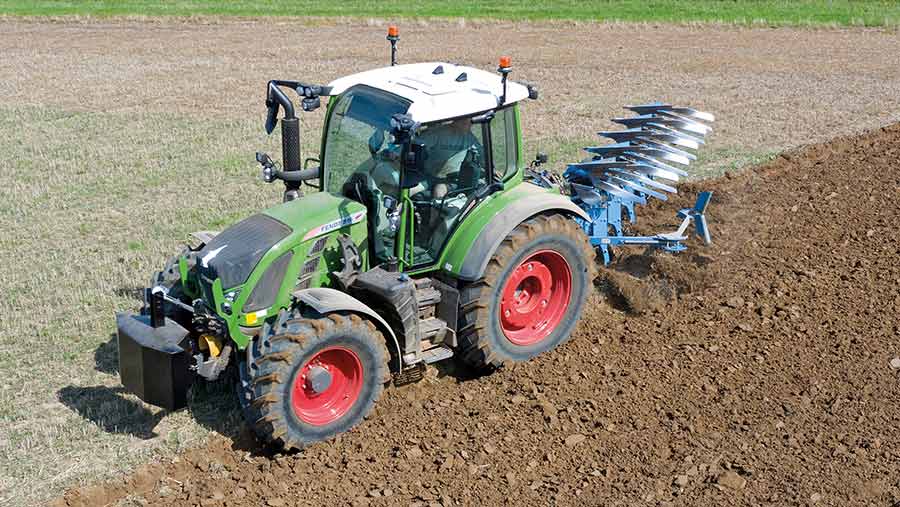 One of the best parts of Fendt’s high-spec only approach is that added features feel like they’re part of the machine, rather than bolt-on afterthoughts.

The front linkage is a good example as it’s well integrated into the chassis and has a dedicated depth control dial mounted above the one for the rear linkage.

This is a neat arrangement, but some of our testers felt that the horizontal position of the dials and the quick raise and lower buttons was a little uncomfortable.

It’s something Fendt has changed on its new One cab design, where the controls are now set in a vertical plane, a bit like John Deere’s. The depth stop is now purely electronic and set in the screen, which might not be to everyone’s taste.

When it comes to lifting ability, the 516 is rated to pick up a maximum of about 3.5t with the front linkage and 7.9t with the rear. This was actually the lowest rear lift capacity of the tractors we tested, but it’s only about 100kg behind the other four-cylinder tractor in the line-up – the Claas Arion 550.

The Fendt’s maximum permissible weight of 10.5t is also slightly lower than its competitors.

As for the hydraulics, Profi and Profi-Plus models get a 110-litre/min load-sensing hydraulic pump as standard and the option of upgrading to a particularly powerful 158-litre/min setup.

More popular Power and Power-Plus models come with a relatively small 75-litre/min unit and the option to spec the 110 version.

Three rear spools are included in the base price of all models and buyers can order up to five on Profi and Profi-Plus models, plus two front valves. These are electronically controlled throughout the range and the positions can be moved in the screen.

There is also a cross gate lever on the armrest that can be set to control any hydraulic function, be it a rear-mounted implement or front loader.

This is one of the features that has been upgraded in the new cab design, giving it more functions and an integrated forward/reverse shuttle function that should be a boon for those using a front loader.

The 500-series is Fendt’s flagship four-cylinder tractor range and the two largest models overlap with the six-cylinder 700-series.

In reality, Fendt sells very few six-cylinder tractors with less than 200hp under the bonnet, so the 516 and 514 are its key tractors in the 140hp to 170hp sector.

Smaller 512 and 513 models develop 125hp and 135hp respectively and these compete with the top end of the 300-series – one of the firm’s biggest selling ranges globally.

All 500-series tractors use the same 4-litre, four-cylinder Deutz engine, teamed to the two-range ML90 Vario transmission that gives a top speed of 50kph.

Four spec levels are available, starting with the simpler Power models that have a 7in touchscreen with headland management and minimal flashy add-ons. Power-Plus is the next step up, adding guidance from Trimble or Novatel and Isobus implement control.

Profi models have a bigger 10in screen, nicer seats for the driver and passenger and can be specced with most options from the Fendt list. However, guidance isn’t available, even as an option.

Profi-Plus is the top-of-the-range model, featuring guidance, a slip control system, Variodoc job recording and the option of higher-spec features such as variable rate and section control.