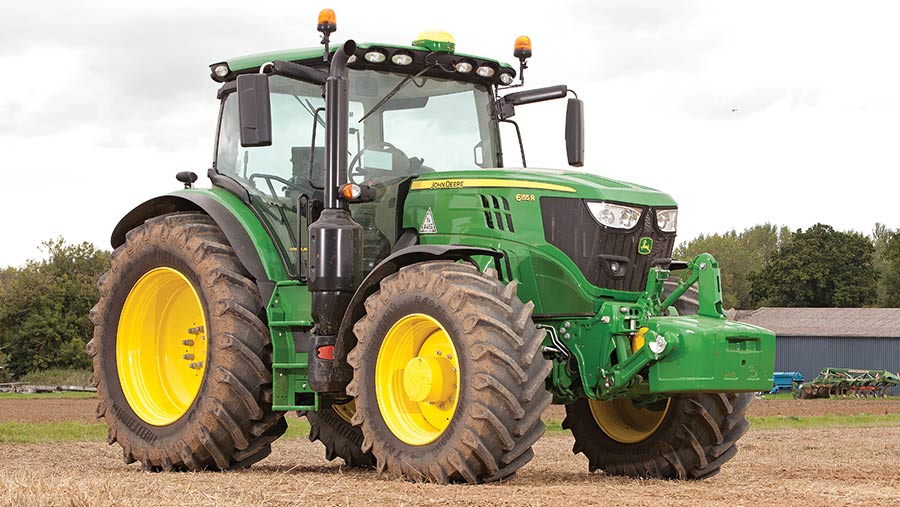 It’s difficult to pick holes in Deere’s well-rounded R-series. The cab is polished in general but the standout feature is the Command Pro joystick, which is easy to use, has a raft of customisation options and is nicely integrated with the cab touchscreen.

It’s arguably the best in this power sector, but that could change when Fendt’s One concept is fully rolled-out.

The downside of all this technology is its contribution to ever-climbing prices, with this model now close to £200,000 before dealer discounts – a scary proposition, particularly for businesses that don’t change their tractors regularly.

See the 6155R Autopowr put through its paces and read the full report below.

The wide steps and neatly tucked away passenger seat allow unobstructed access into the cab. Our test model came in Premium spec and there is little more refinement one could want for whiling away long hours in the seat.

From a high perch, particularly compared with the four-cylinder machines, operators get good views to all four corners. The cab is also positioned further back than the New Holland, which means it’s fairly easy to see the pick-up hitch.

It comes with an opening right-hand door and the compact nature of the armrest and screen means it’s easy to get past without turning the seat, should you need to disembark from that side.

However, the four-post cab format means the doors are big and we found they flapped around when opened.

They didn’t form a tight seal when closed, either, which meant noise inside was higher than expected. With that in mind, we’d be tempted to go for the optional five-post arrangement with a smaller main door, B pillar and window.

The layout of the controls is perfectly suited to ploughing and, with the operator’s body angled to look out of the rear window, the linkage scroll wheel, draft and position set buttons fall neatly to hand for little tweaks on the fly.

But the standout cab feature is the Command Pro joystick, which on top-spec models has taken the place of the old stubby lever and scroll wheel combination.

Pushing it in the direction of travel controls speed but, cleverly, operators can decide to switch to pedal mode simply by putting their foot on the throttle, without having to notify the tractor.

Directional changes come by nudging it through an L-shaped gate either forwards or backwards. It’s a neat setup and renders the old column-mounted shuttle redundant, particularly considering the park position has been shifted to a button alongside the joystick.

This is rarely required though, as the transmission automatically parks as soon as the driver’s backside leaves the seat.

Cruise comes by knocking the stick to the right – just like a Fendt – and there are two speed settings that operators can toggle between on a rocker switch. We found this handy for headlands and it can be set in an iTec turn sequence. 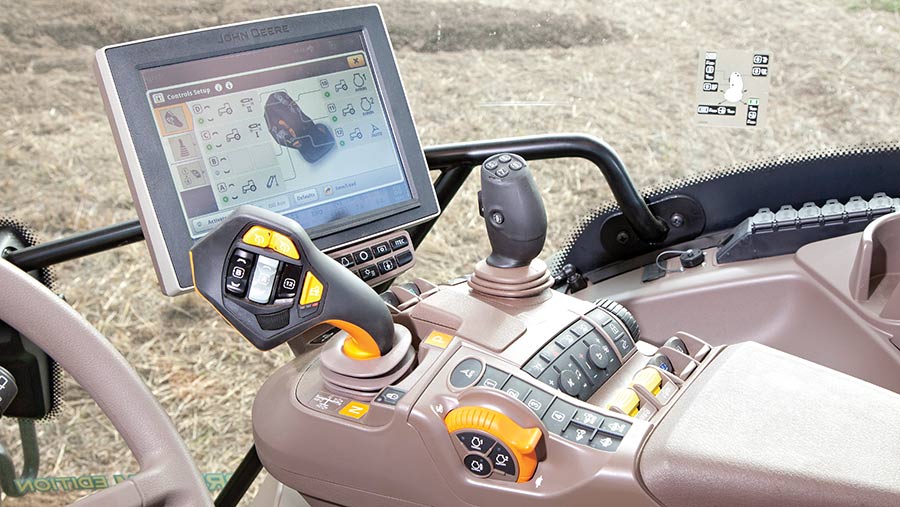 In all, there are 12 assignable buttons on the joystick – eight are double-acting with detents and four are single buttons for functions such as Autotrac.

These are all pretty easy to set and are displayed at start-up on the 4600 screen, at which point operators can choose a saved profile or make their own tweaks to the settings.

Some users won’t be fussed about this level of customisation, but the fact that it’s relatively simple to do makes it pretty attractive, even for self-proclaimed tractor driving dinosaurs.

The screen itself is intuitive, too – navigation is uncomplicated and even less frequently used functions, such as lowering the front suspension to get a weight block on, can be found in seconds.

In fact, downsides are few and far between. If anything, the addition of the joystick means the armrest is now a little cluttered with surplus buttons for iTec, Autotrac, pto and spools that aren’t really required.

Similarly, the once neat bank of spool paddles at the front of the Command Arm has been split up to make space for the joystick.

The 6155R runs a six-cylinder, 6.8-litre engine that is used throughout the top of the 6R range and also finds a home in the three smallest models of the 7-series – up to the 7270R.

This meant that spot fuel consumption rates were often higher than the four-cylinder tractors on test when the going was easy, though it hung on much better when dragging the plough through clay-capped sections of the fields.

Deere was one of the last engine makers to adopt AdBlue for emissions control, preferring to focus on exhaust gas recirculation. But as the laws tightened their grip, the company had no choice but to add it to a stacked list of cleaning kit.

The 6Rs now use a combination of SCR, DPF and EGR. It’s a fairly complex arrangement, but Deere estimates AdBlue consumption to be just 2-3% of fuel use, which is pretty frugal compared with the competition.

With that in mind, it has just a 16-litre tank – tiny compared with the 56 litres of the New Holland.

As for servicing, engine maintenance intervals are up to 750 hours and the AdBlue filter will need replacing every 4,500 hours.

Roughly 55% of all 6Rs sold in the UK are fitted with an Autopowr transmission. It’s built by ZF, which provides the CVTs for all Mannheim produced machines (up to the 6250R). However, Deere manufactures its own gearboxes for tractors assembled at its production facility in Waterloo, Iowa.

The way it works has changed slightly since the earliest incarnations, with operators no longer having to keep a foot on the brake to stop it creeping from a standstill.

It means the tractors will come to a swift stop once the throttle has been lifted and drive is re-engaged with a touch of the pedal or nudge of the joystick.

In terms of driveline efficiency, Deere says the gearbox uses at least 60% mechanical power at any given speed and offers four points of 100% mechanical drive.

This is achieved by building four ranges into the transmission, which it hops between at set speeds.

Operators won’t notice the changes as the hydrostatic element drifts in and out of work, but at the points of fully mechanical drive, the tractor loses less power through the transmission, so it’s worth bearing in mind when setting target speeds.

These points peak sharply at 3.5kph, 10.5kph and 21kph, while there’s a gradual rise from 30kph to full mechanical drive at 50kph.

We found that running in fully automatic mode, with the tractor left to determine the relationship between engine rpm and transmission speed, caused a bit of a whine on our test machine, but fiddling with the droop settings in custom mode helps lower the noise while maintaining forward motion.

To help trim fuel costs, the engine manages its rpm when at full road speed – 40kph is reached at 1,300rpm, though the 1,630rpm for 50kph means it requires a few more revs than the New Holland. 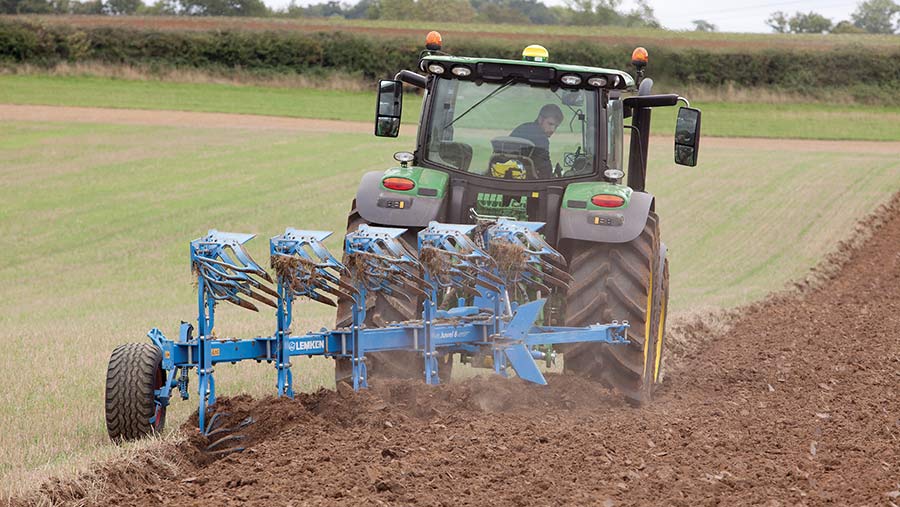 Deere’s rear setup sees all the spools positioned on the left side of the top link to make operator access easier when hooking on implements.

The quick release paddles on each valve make connection and disconnection simple, with the Claas Arion the only other test tractor to offer this simple but useful facility.

Handily, the pick-up hitch doesn’t occupy a spool valve – instead there’s a separate supply taken with an extend and retract button in the cab to operate it. Being able to get by with one fewer spools may help shave a bit off the purchase price.

However, we found that there were too many options for setting and adjusting the linkage.

Having the Command Pro joystick means split locations for spool paddles, with the first valve and the link arm tabs remaining at the front of the armrest and the rest of the spools relegated to nearer the pto controls.

It is pretty easy to confuse the two front paddles, so it’s better to go to the trouble of setting them up on the Command Pro.

The test week involved plenty of switching implements and weight blocks, which gave us a decent insight into the ease of the process on each tractor.

One thing that stood out on the 6155R was the simple design of the front linkage pins – a sprung locking tab that pulls up to release the pin, meaning there’s no risk trapping your fingers in an unforgiving linchpin.

A useful addition to our model was the £523 hydraulic top link, the controls for which can be assigned to rear fender buttons. It makes hooking up much easier and, once you’ve had one, it is tricky to imagine life without it.

If that’s your kind of thing then it might be worth shopping around for a cheaper aftermarket option.

Deere still plonks its age-old and fairly diddy toolbox on the diesel tank. It would be nice to see something bigger integrated on the machine somewhere, with the capacity to carry some pins, points for cultivators and a selection of tools.

The current 6R range had big boots to fill when it took over from the well-loved 6000 series in 2012. There have been various updates over the eight years, most notably the original flagship 6210R being replaced by three larger machines.

The range is now a bit of a monster, consisting of no fewer than 11 models split into groups according to their chassis sizes. The smallest three models – 6110R, 6120R and 6130R – have a 2.58m wheelbase and run a 4.5-litre, four-cylinder engine.

As for transmissions, the 6155R gets the full five options, including the simple Powrquad, Autoquad Plus and the Ecoshift variant.

Deere’s Directdrive double-clutch gearbox can be specced on models from the 6145R up to the 6215R, while the Autopowr CVT (a £5,465 upgrade on the Directdrive) is an option throughout the line-up and is the sole choice for buyers of the 6230R and 6250R.

There are three spec levels – Select, Premium, and the range-topping Ultimate, the latter adding a selection of precision ag packages including screens, Autotrac activation and implement steer.

Deere made its Command Pro armrest available as an option on all models in 2018. It remains a £1,472 extra on all but the Ultimate spec, where it is included.

There is no longer the option to have an Autopowr gearbox with manual spools and a right-hand console, as all CVT tractors get the Command Arm as standard.