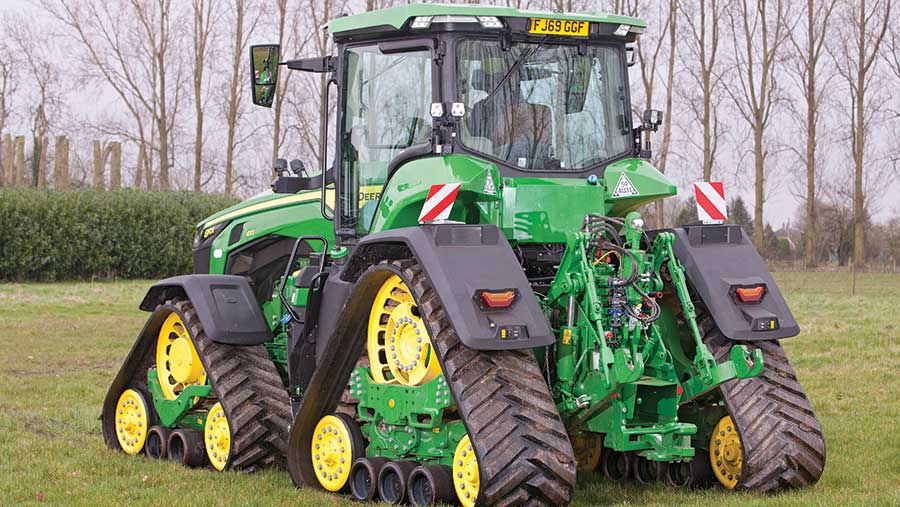 Since its launch at Germany’s Agritechnica show in November, the web has been awash with pictures and videos of John Deere’s shiny new 8RX tracked tractor range.

The hype has been considerable, but at a glance, it’s hard to see what all the fuss is about – firms such as Soucy and Camso (formerly Camoplast) have been offering retrofit track units for years, and the 8RX looks a lot like scores of other conversions.

Closer inspection reveals that this is far from a mildly modified 8R, though.

The front axle and back end are completely different beasts, and the whole machine sits higher off the ground.

In fact, the cab, engine and transmission are said to be the only major components shared between the two.

This means there is no opportunity to upgrade a standard 8R to RX spec and, conversely, no way of fitting wheels to an 8RX.  Deere has, in effect, created a new breed of tractor.

It’s an expensive one, too, commanding a price premium of more than 20% over an equivalent wheeled model.

So, what’s it like and what will it be used for? To find out, we eyed up one of the first models to make it onto UK soil – a flagship 8410RX.

Where does the 8RX fit in?

The introduction of the 8RX means buyers in the market for a 300-400hp John Deere tractor get the choice of three very different methods of putting that power to the ground.

Those looking for a solid all-rounder will still be best served by the standard wheeled 8R. It’s the only one of the 8R variants to have a 50kph top speed, which means it isn’t purely limited to hauling heavy cultivators. 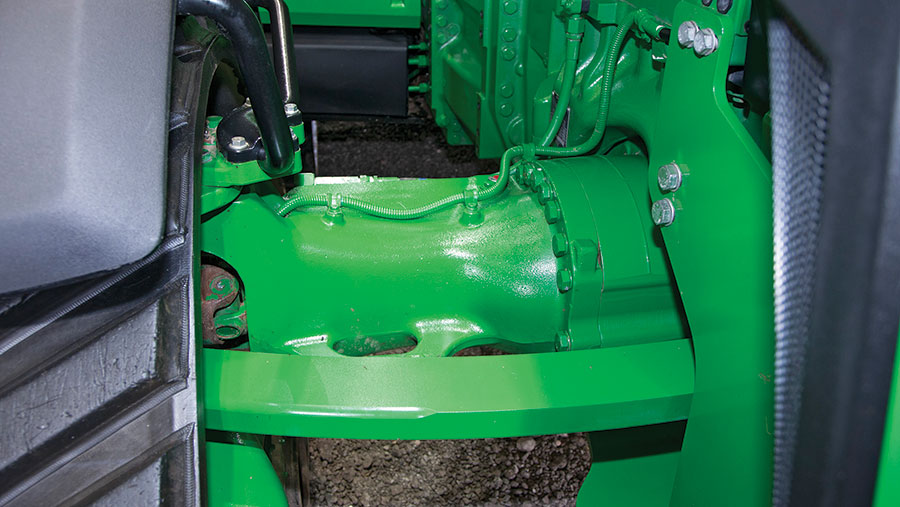 For sheer straight-line pulling power, Deere is continuing to offer its twin-track 8RT.

Its 3.5sq m footprint is a good 1.5sq m larger than the standard 8R, and the fact it doesn’t have a steering axle or pivot point means power transfer is pretty efficient.

However, it costs about 18% more than the standard tractor and is subject to the usual twin-track drawbacks of scuffing up headlands, spinning in the wet and needing an H-licence to travel on the road.

This is where the 8RX comes in. At 4.5 sqm, its track footprint is even larger than the RT, and this means it exerts just 7psi of ground pressure.

The geometry of the front end also means the turning circle is tighter than the standard tractor. In fact, at 10.5m, it’s roughly on par with a 6215R.

On top of that, the steering front end means operators don’t need a special licence to drive it and it’s available with a pick-up hitch, so it can tow, if required, albeit at a top speed of 40kph.

Unsurprisingly, it’s the most expensive of the three options, but as it’s just 3% more than the 8RT, it’s likely to put a serious dent in twin-track sales, particularly in the UK.

How does it differ from a standard 8R?

The 8RX’s front axle and back end are both completely different to a standard 8R, and the configuration of these means it sits considerably higher off the ground.

This extra height means drive from the axles can go directly to the tracks’ drive wheels, without the need for any additional gearboxes. It also means the front tracks can tuck under the chassis to deliver that tight turning circle.

The front axle itself is custom-made for the 8RX and is far heavier-duty than a conventional unit.

The huge steering arm is the most notable departure from a standard design, and it’s been built to take the additional strain of pushing that large contact area around a bend. It’s even capable of turning when stationary. 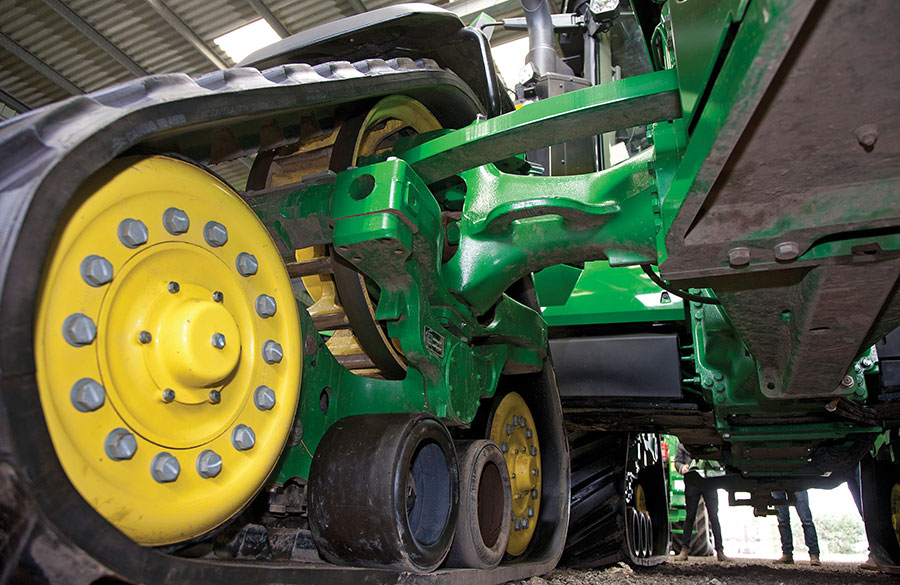 It’s a similar story at the back end, where the height of the axle has been raised and the size of the casting increased ­– according to Deere, the 8RX’s back end is the largest single casting it produces.

All this heavy engineering means it weighs 18.7t unladen and it can carry a 5.3t payload, taking the maximum permissible weight up to 24t.

To compensate for the fact the triangular rear tracks stick out at the back, Deere has also pushed the rear links and hitch rearward. This means it can still turn tight, without trailed implements fouling on the back of them.

The final significant difference is the four-point cab suspension system which, in the absence of front-axle damping, is the main source of comfort for the operator.

This, plus the increased ground clearance, means the 8RX sits 200mm taller than a standard 8R.

For those who only have steady fieldwork in mind, there is an option to have an active seat instead of the cab suspension.

Who makes the tracks?

According to Deere, the track units are produced in-house and they are shod with Camso rubber.

Like the 9RX, these are positive-drive units, meaning power is transferred to the track by the drive wheel engaging with lugs on the inside of the track, rather than the friction system used by Claas and Fendt (formerly Challenger).

The rear units are based heavily on those from the 9RX, albeit in a slightly smaller package. As a result, they have three mid-rollers which are suspended on a frame under the main drive wheel.

This pivots back and forth by up to 10deg, helping the units follow contours and cushion the ride. 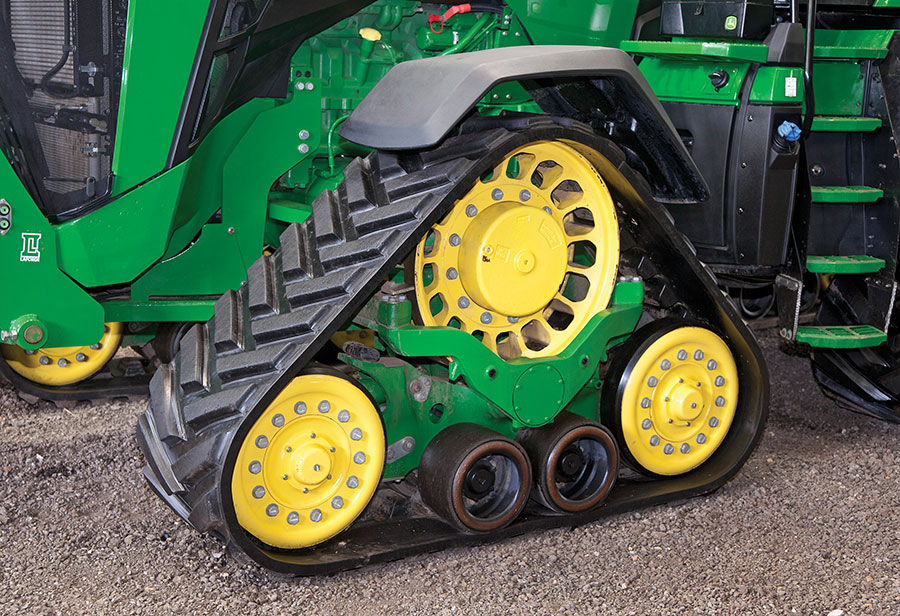 The front tracks are considerably smaller and use two mid-rollers, but they have the same pivot design as the rears. The front of the track unit has been raised by 20mm, though, in a bid to prevent bulldozing of soil.

A number of track widths will be offered in the UK, the most popular of which is likely to be the larger configuration of 30in rears and 24in fronts.

Various track widths are available from 72cm to 120cm, and all bar the 120cm spacing measure less than 3m wide on the largest tracks. 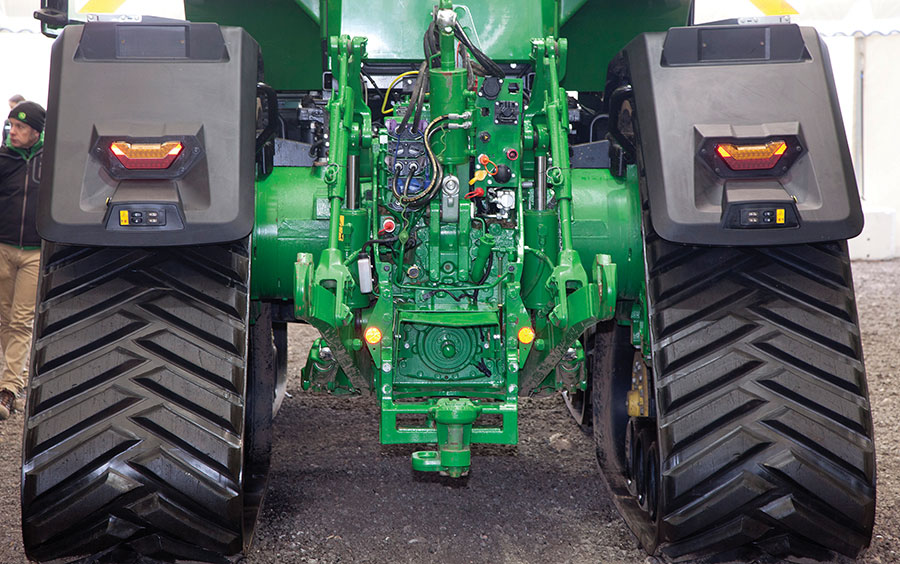 Has the cab changed?

Along with the rest of the 8R range, there have been a number of upgrades in the cab.

These include removing the air conditioning system from the roof to give a smoother profile and make space for an additional 16cm screen that offers luxuries such as Apple Car Play, as well as six-point surround-sound speakers. 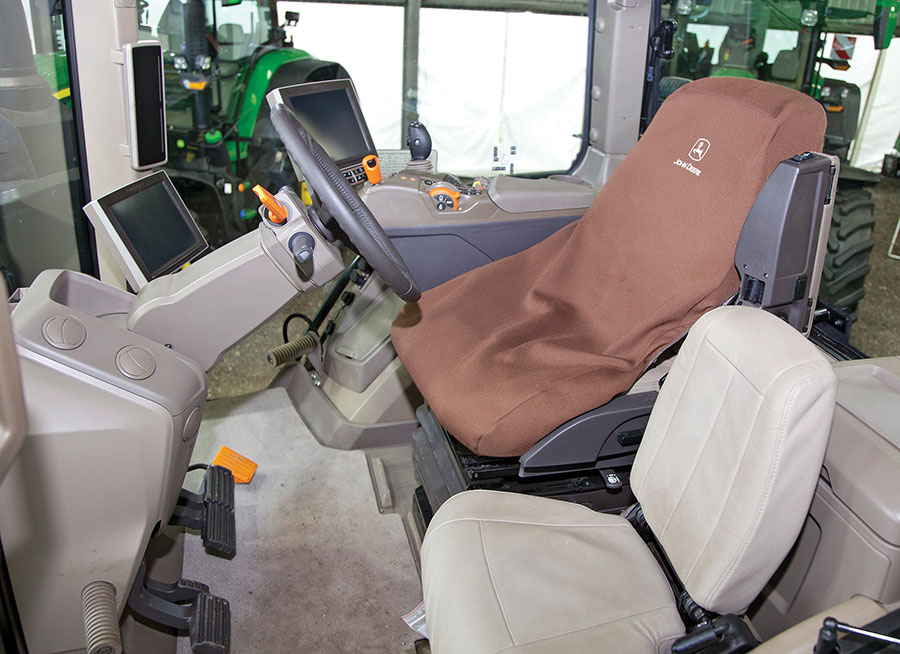 There is also now the option of a fancy seat with massaging, heating and cooling functions, plus 65deg of swivel that will help the operator find a comfortable position.

In a bid to outsmart pilferers, buyers can also choose to have the Greenstar GPS receiver integrated into the cab roof.

New angular styling has come in too, which is apparently the work of a design agency that has worked with BMW.

What engine and transmission does it have?

Power comes from Deere’s own nine-litre, six-cylinder engine, which delivers power outputs from 310hp in the 8310RX to 410hp in the 8410RX.

As usual, this has Deere’s everything-but-the-kitchen-sink emissions setup, with a DPF, DOC, EGR and SCR system to clean up exhaust gasses. It’s complicated, but it does result in lower AdBlue use.

There are two transmissions on offer, with all models getting the option of the e23 double-clutch arrangement, and all but the largest 8410RX available with Autopowr CVT.

As the e23 has a minimum working speed of 2.3kph, the CVT box is likely to be the more popular option, which will limit sales of the largest model.

In Autopowr models, buyers also have the option of the Fendt-like Command Pro joystick, which was previously exclusive to the 6R range.

Driving the 8RX is almost identical to a wheeled tractor and the operator doesn’t really have to make any concessions because it is on tracks.

This means there is an automatic four-wheel drive system, auto diff-lock and a simple steering system that purely turns the front tracks – there’s no input from the independent brakes.

On the road, transport speeds are supposedly limited to 40kph (it will actually go about 44kph) and the cab suspension does a decent job of ironing out the bumps.

The ride is more wooden than that of a wheeled 8R and there is more vibration, but on the plus side, there is a lot less bounce than you get with large-profile tyres.

How does it compare with a half-track?

The 8RX is a considerably more expensive tractor to produce than a half-track like Case’s Rowtrac and Class’ Axion 900 Terra Trac, which have more in common with their wheeled cousins.

But Deere has gambled on the fact that there are enough additional benefits to tempt buyers to shell out.

These include a larger footprint (roughly 0.64sq m more than an Axion 900 Terra Trac) and better turning ability on the headlands and when climbing steep banks – something that some half-track operators have complained about.

So far, the gamble appears to be paying off, as Deere says it has already taken 26 orders, which is no mean feat in the current tractor market. These are scheduled to be delivered in late August.