There is a growing demand from shoppers in the 300hp market for machines more versatile than the traditional tillage-grade tractor.

In response, the major manufacturers have been scrambling to fill the vacancy between their mid-framed all-rounders and 400hp heavy horses.

The holy grail is a tractor that is light enough to haul a full-to-the-brim grain trailer within the road-going weight limits, yet capable of being ballasted up to the hilt for pure pulling power.

Not one to pass up a chance to bolster its fleet, Case IH – together with sister brand New Holland – pulled the wraps off a new two-model tractor range last summer that was designed with power-to-weight ratio as a top priority.

For Case, it was to slot neatly between the biggest 240hp Puma and the Racine-built Magnums, of which the smallest is 250hp, but is sat on a much larger chassis.

The Optum is a hybrid of the two, offering power outputs equivalent to the smaller Magnums, yet all wrapped-up in a Puma-sized bundle of red metal.

We tried the larger of the two models, which is rated to 300hp.

However, it also has an ungainly appearance.

The narrow-looking track width means the back wheels slot well within the confines of the rear mudguards and the cab sits in the clouds, which gives it the body shape of a post-growth-spurt teenager.

The vertical five-step hike into the cab space is a chore best avoided where possible, while the lanky build also leaves linkage, pto and spool fender switches out of reach of the vertically challenged. 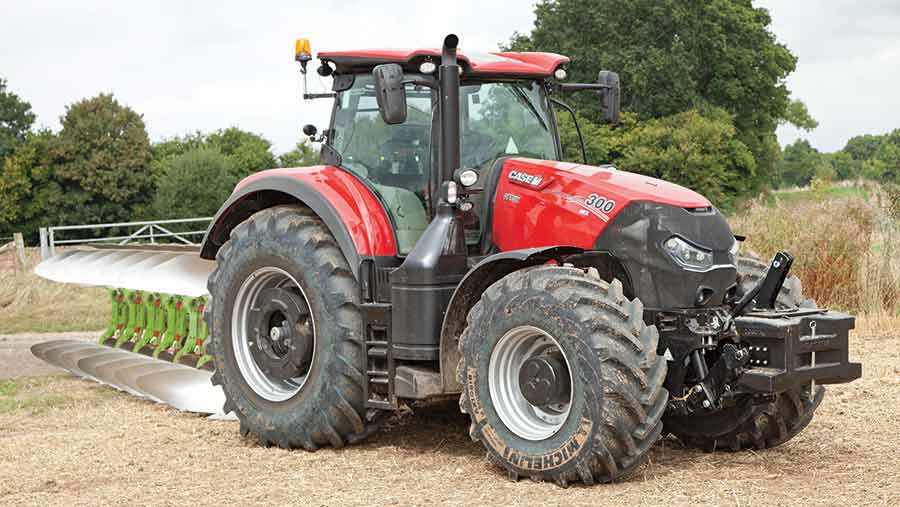 There is not much change in the office space, where the design is identical to the smaller Pumas.

However, the bulkier build and bulbous bonnet completely block the view to the front links and also wreck any chance of seeing the front wheel in the furrow.

Once inside, the curving, dark-pillared frame and brown-and-beige wallpaper can leave the gaff feeling a little gloomy too, but on the plus side it provides welcome relief from the sun during late summer cultivations.

The back window and blind is positioned perilously close to the driver’s head, which might cause trouble for taller operators, while the air-con seemed to struggle as the mercury rose outside the cab.

As for ergonomics, the interior layout is a breeze to negotiate. There’s no dash behind the steering wheel – as has been the case with St Valentin-built tractors for some time now – so instead there is a handy tray for stashing your idiot’s guide to ploughing. 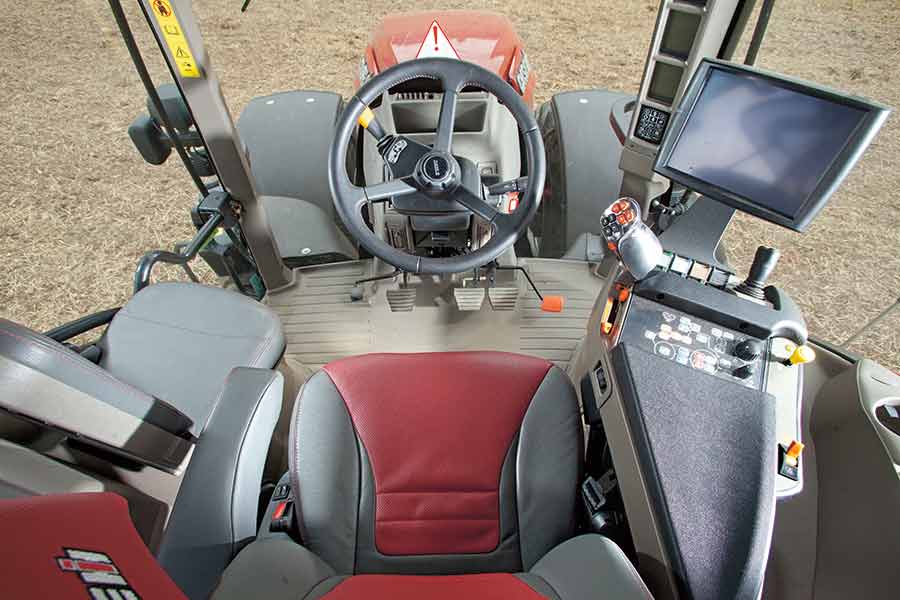 Key information, including cruise limits, current speed, plus the fuel and AdBlue level, is instead parked up the A-pillar, which keeps it neatly in view and at eye level during work.

What about the screen?

The other major plus is the limited function of the main screen, which means minor adjustments won’t bring novice operators out in a cold sweat.

While the likes of Fendt tidy up cab space by cramming controls in the touchscreen television, Case sticks predominantly with easily identified buttons and dials.

It means the monitor’s main job is to display work information, including consumption and worked area.

The only reason the driver might have to delve deeper into the screen settings is to adjust hydraulic time and flow or to set/tweak a headland management programme (which is a doddle, incidentally).

Isobus is available for those who are that way inclined, too.

Climb just a few more rungs up the horsepower ladder and you can expect to see rivals employing oil-burners of 9 litres or more, but the Optum makes do with a modestly sized 6.7-litre block buried behind the wad of radiators.

To try to eke out every last ounce of power, Case has fitted a variable geometry turbo that helps deliver maximum torque for as long as possible.

In doing so, we found the Optum could operate at near library-level quietness and it was often only the clatter of plough metal that echoed across the field.

The engine took advantage wherever the land was at its lightest and most forgiving, tumbling to below 1,000rpm and reigning-in fuel consumption in the process.

For the most part the flywheel settled at 1,100rpm and thirst held steady at about 30 litres/hour. 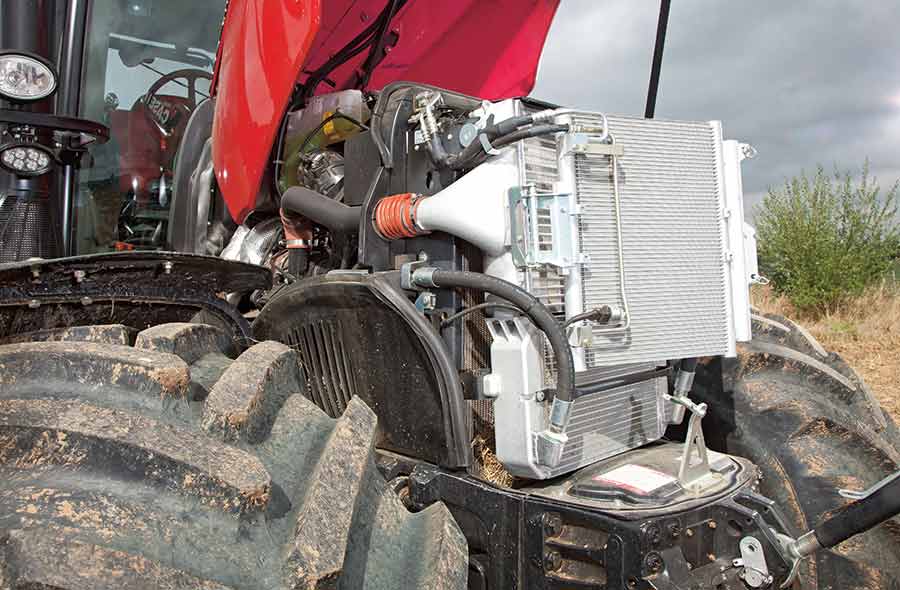 It wasn’t all plain sailing, though. Stiffer ground got the engine shouting and cranked things up to 1,700rpm, forcing consumption to drift beyond the 40 litres/hour mark.

Case offers just one option where transmissions are concerned – the seamless CVX.

It’s well-matched to the engine and has Jedi-like reaction times to changes in engine load where forward speed is the main priority. 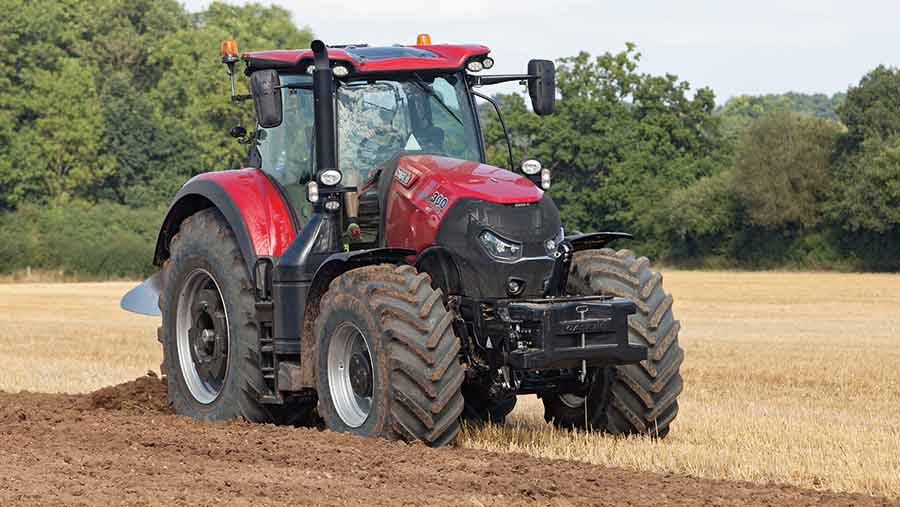 The shiny silver handstick replicates the foot throttle and glides smoothly through its gate, taking the tractor up to the maximum speed in whichever of the three adjustable ranges is selected.

Quick speed adjustments can be made by scrolling a thumb wheel on the shoulder of the stick, while range changes are dealt with by run-of-the-mill hare and tortoise buttons.

The simple system is different to those used by some of the other manufacturers, but minimises technical complication for those who like to avoid it.

Work was provided by a seven-furrow Hubert plough – turn the page for more detail about how it performed.

Early on we noticed a lag in the shuttle between forward and reverse, which could be remedied in part – but not fully – by a three-stage adjustment on the armrest. 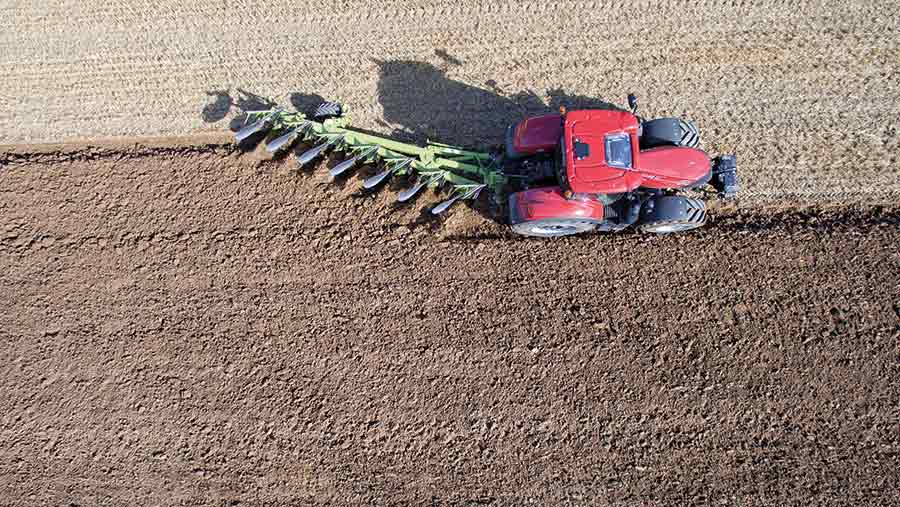 The split-throttle labelling also caused a spot of confusion. The left side deals with minimum engine speed and the right half limits the maximum, but stickers or diagrams are thin on the ground and it can be easy to get in a pickle.

Colour-coded spools make for easier identification, as do the cluster of dials hidden under an armrest flap that are used to adjust lift height, drop speed and the like.

Elsewhere, traction was sound thanks to the fat footprint of the 710mm-wide Michelin footwear.

The 500kg of wheel weights hanging off either end of the bar axle probably helped and offer the Optum plenty of options for bulking up for heavy draft jobs at the drop of a hat.

Another 1,000kg weight was hooked to the in-house-built front linkage mounted on a load-bearing sump and was enough to keep the nose on the deck despite the 2.5t rear attachment.

However, in the field it is hobbled by a painfully clumsy turning circle. Despite being designed as a nimble high-horsepower tractor, it negotiates headland turns with the grace of a heavily anesthetised elephant.

Case’s promotional patter bigs up the versatility of the Optum, but its sheer size and vertical cab climb leaves it feeling like a 400hp tractor and will prove an inconvenience for anyone forced to get in and out frequently during yard or haulage jobs.

However, the simple layout and button-based controls will be music to the ears of old-school tractor drivers, while the smooth-running engine keeps cab clamour to a minimum and an air-suspended seat and front axle make faster-paced transport surprisingly tranquil.

The engine and transmission work well together to keep a lid on consumption too, but if you’re after an out-and-out tillage tractor then the Magnum remains the sensible choice despite the Optum’s abundance of options for extra ballast.