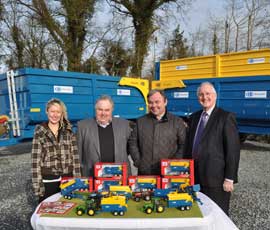 Northern Ireland trailer manufacturer Kane has sold more than 10,000 grain and silage trailers across Europe since they were released in early February 2012. Unfortunately for Kane’s bank manager, it’s the Britains model version that has been flying off the shelves (although we’re sure the real version is doing just as well).

The company – now owned by toy manufacturer Tomy – has been making model machinery since 1921 and releases 20-30 new items each year. It expects to sell as many as 30,000 of the 32:1 trailer model within the year. That could mean it’s Britains’ best-selling model ever, beating the 20,000 units a year averaged by enormous tractor brands like New Holland and John Deere.

The Kane silage trailer joins the 15 other agricultural machinery manufacturers in the Britains range and, kitted out with rear-wheel steering and spring-loaded hitch, costs £18.99.