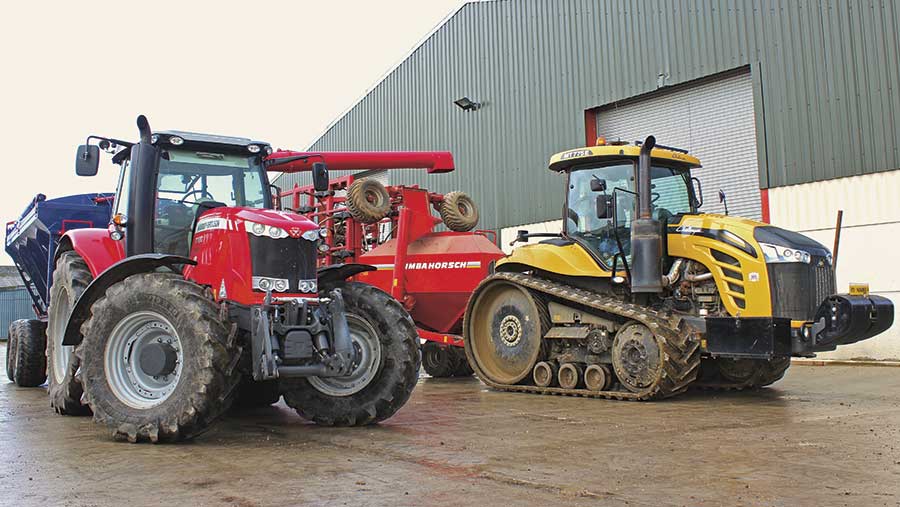 The novel trailer-and-auger set-up came about after a risk assessment that alerted Mr Peck, manager at Willoughby Farms, to the dangers of standing directly below the dangling one-tonne sacks of treated seed.

After hours spent mulling things over from the combine seat one harvest, he decided bulk loading was the answer to eliminate any risk of a squished worker and minimise their exposure to dust.

Shifting to a bulk loader would also reduce the pressure on the farm’s telehandler, which was spending every autumn chasing the drill around 2,430ha of cereal ground on the eastern edge of the Lincolnshire Wolds.

Though some fields extend to 60ha, a litter of pokey 3ha patches meant the loader was constantly on the move dragging a flatbed trailer filled with seed bags around the farm. 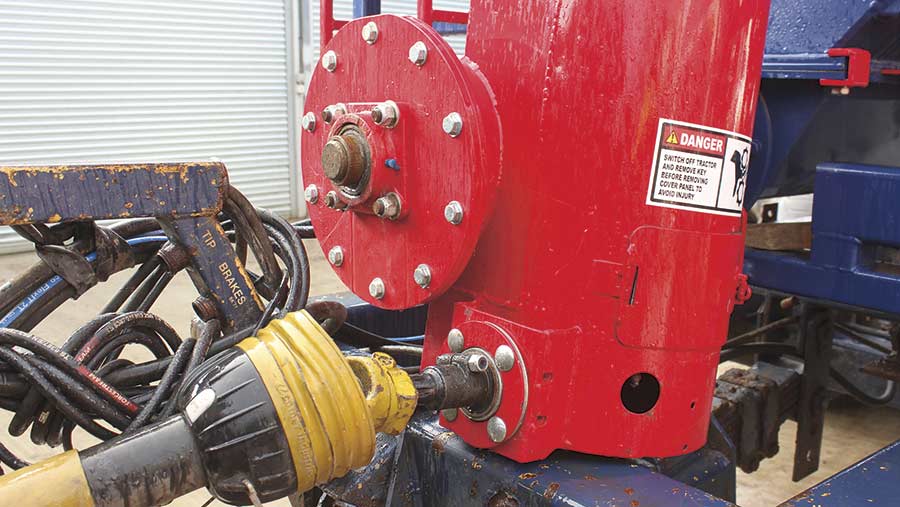 Added to that, it also had to keep pace with the 8m drilling rig. Mr Peck has traditionally had two seeders at his disposal – a Horsch CO8 and Pottinger Terrasem C8 – to suit different conditions and soil types that can range from chalky-based wold to heavy marine clay.

Each of the drills can comfortably clock up 60ha in good conditions, so keeping them fed with 200kg/ha of wheat seed is a relentless job.

Mr Peck’s initial plan was to use a separate auger fed by the trailer’s tailgate grain chute.

A few quick calculations tallied the cost of parts at about £3,500, and as a detached, aftermarket kit it would have been pretty quick and easy to cobble together, too.

However, backing into a tight field entrance is less convenient than having a side-mounted spout, and tipping the fully loaded trailer on unstable gateway ground was a recipe for trouble. 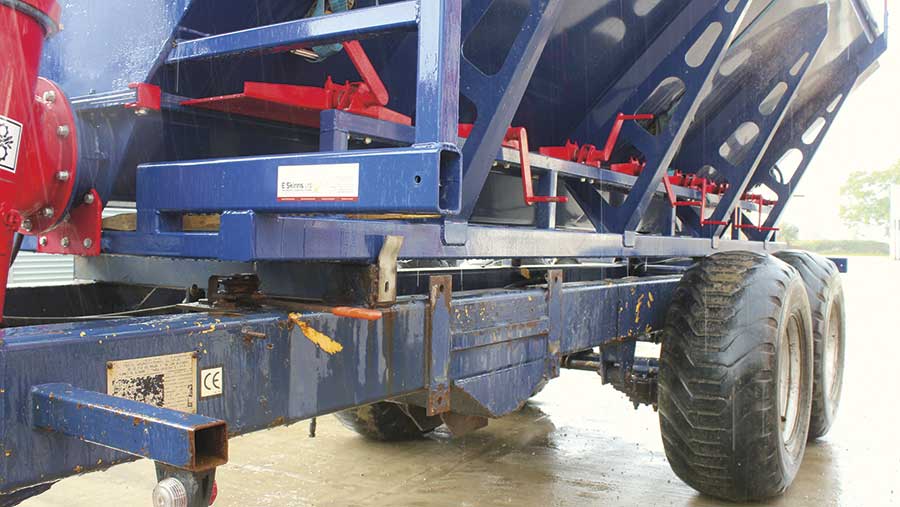 The other catch was the limited auger size – the 4in flights offered by most of the machines already on the market would limit offload speed and reduce its versatility for other jobs.

At the other end of the scale, a chaser bin was the more expensive and sophisticated option, but its cost was impossible to justify despite the vast output speeds and greater versatility.

Instead, Mr Peck opted to take the middle ground with a purpose-built machine that wouldn’t break the bank.

He sought the help of fabrication specialist E Skinns, based 20 miles down the road in Woodall Spa, Lincolnshire, to sketch out some plans that would fit his budget.

A 14t Wootton trailer chassis was to be central to the new system. It was supplied by Mr Peck and gave him the option of converting it back to a standard grain hauler outside the drilling season.

Switching back from drill filling duties is a 20-minute job, and by removing the two ram pins, hinge pins and hoisting it up in the air with the telehandler, he is able to make use of it as a run-of-the-mill 14-tonner. 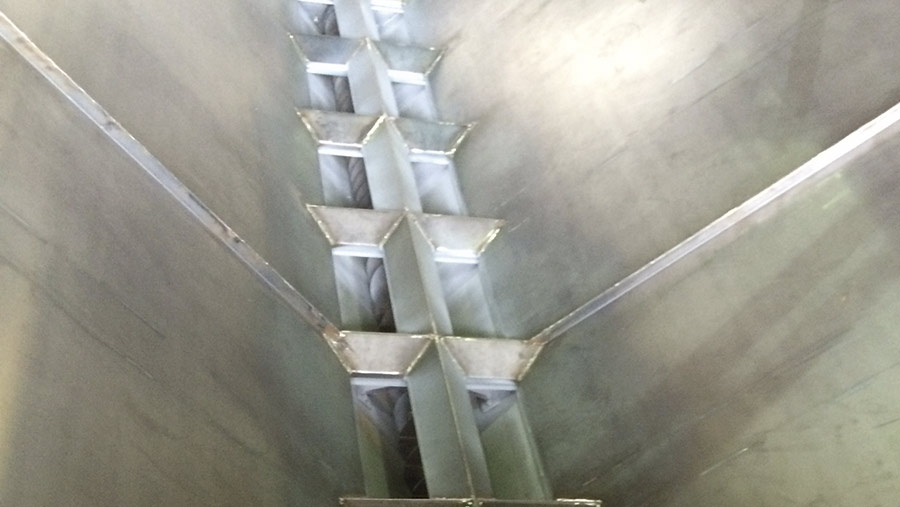 Using the existing chassis also meant the running gear, including oil-activated brakes and tyres, was already in place.

Skinns designed the V-shaped body to suit the 6m length of auger that was to sit in the hopper gully.

With that in mind, the chassis rails were glued together using 100 x 100 x 6mm box section, while the cross members made use of lighter-weight 120 x 60 x 6mm box and the side panels were formed from 3mm mild steel sheet.

Eight sliders sit in a row above the trough auger to speed up or slow down the flow of seed to the incline and spout augers.

Generally speaking, the drill driver empties the back and front fairly evenly to make sure it travels as well as possible on the road.

As well as managing the balance of weight in the hopper, the sliders also give the operator more control over how much material falls onto the auger, and so how quickly it is fed into the drill. 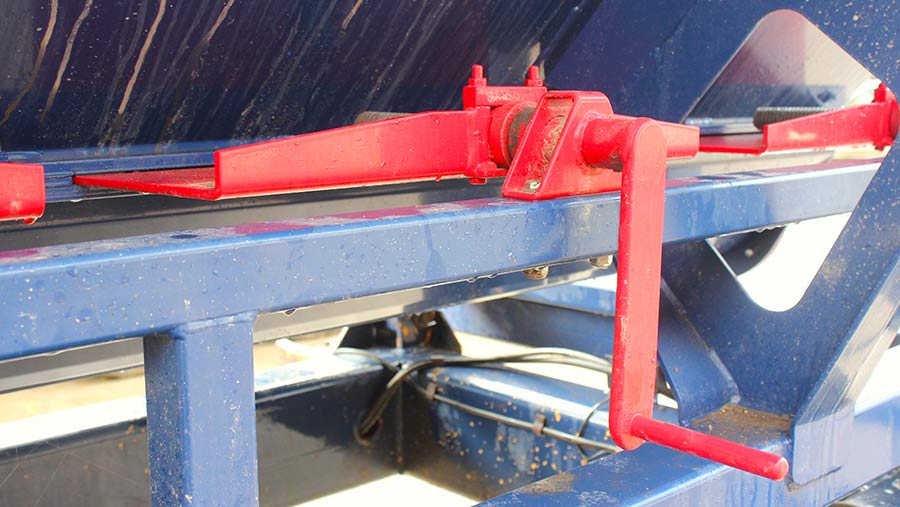 Skinns turned to auger specialists Astwell Augers, based in Thrapston, Northamptonshire, for the central tube and 200mm flights to fit inside the 230mm trough.

However, excess flex along the auger’s 6m length meant some post-purchase alterations were required and Skinns mounted a mid-point hanger bearing to take some of the weight.

Power for the trough auger is provided by a hydraulic motor that is driven from the tractor’s back-end oil supply.

It spins a sprocket linked to the main auger shaft at 400rpm, and a non-return valve in the oil line prevents any major mishaps should someone accidentally run the auger in reverse.

The original hydraulic motor – a 9hp, 75cc unit – was supplied by Astwell, but Willoughby Estates has since upgraded it for something with a bit more torque.

Elsewhere, the vertical and spout augers that shift the seed 2.2m up and 5.5m out to the drill are propelled by the tractor’s pto and are designed to spin at about 230rpm.

Both recycled Massey Ferguson augers were sourced from JMT Engineering combine breakers in Southam, Warwickshire, and provide 280mm flights inside a 305mm tube.

What about switching crops?

To avoid contamination when switching crops, the driver simply fires up a leaf blower to blast any remaining seeds through cleaning chutes in the base of the hopper.

However, the change in system also meant Mr Peck had to rethink his seed storage system.

With the bagged seed ditched, he built two 20t bays in a barn on the main farm to stash his wheat and barley seed, which can be loaded into the drill filler using the telehandler in under five minutes.

Aside from the hydraulic motor upgrade, changes have been kept to a minimum.

The Horsch CO8 has a manhole-sized hopper opening, so this winter saw a sock fitted at the auger outlet to make the pouring process more accurate.

Mr Peck considered using it for shifting urea around the farm – most of the nitrogen goes on in granular form – but metal corrosion has so far put him off.