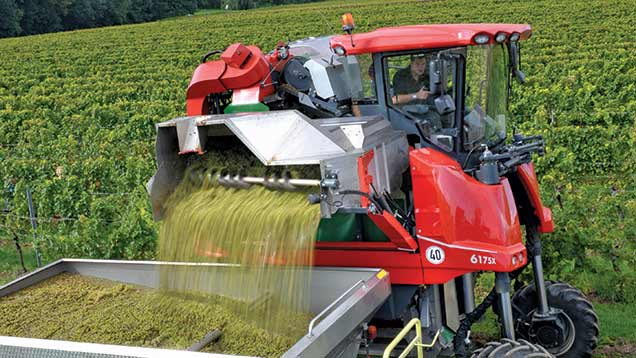 Grape harvesting always evokes images of students toiling under the sun on some Pyrenean hillside. But the truth is that 90% of grapes around the world are harvested mechanically, thanks to the fact that a single machine can do as much as 50 or more pickers.

The only exception to that is smaller vineyards and ultra-posh ones in France, which insist on harvesting by hand or impose such punitive restrictions that using a machine is impossible.

How does a grape picker work?

The principle is simple – the harvester straddles the vines and uses a set of longitudinal rods to shake them. These can be moved closer or further apart and the vigorousness of the shaking depends on conditions and variety of grape.

Meanwhile, a fish-scale runner belt wraps around the stem of the vines to prevent the grapes from falling on to the ground. Grapes and residue then drop on to a conveyor and pass a powerful primary suction fan.

Cups on the belt take the grapes to the top of the machine, then on to transfer conveyors, past a secondary suction unit, and finally drop them into the hoppers on either side. Leaves and stems are sucked down chutes to the bottom of the machine where knives chop them up before spitting them out. Growers on larger estates tend to prefer an auger transfer directly into a trailer.

The separation technology has improved greatly over the years. However the challenge is to shake the vines hard enough to remove all the fruit but not so hard that they are damaged. Equally, the suction fans mustn’t work so powerfully that they suck out the grapes as well as the residue.

German maker ERO-Geratebau makes some of the highest output machines. Its top-of-the-range Grapeliner 6200 has a 200hp Deutz to shift the 8.7t machine (plus 3t of grapes) up steep slopes.

Output depends on grape variety, soil conditions, length of row and steepness of the land. The Grapeliner’s throughput is 1.5-2.5 hours/ha with a yield of 8-20t/ha and a forward speed of 3-6kph. Fuel consumption is 12-15 litres/hour.

A GPS guidance system chooses the best route along the vines and ultrasonic height adjustment allows for the varying height of the bottom-most grapes.

Options include automatic steering to detect the poles of the vine supports and auto-stopping should the harvester take in a foreign body. Prices start at €200,000 (£160,000).

Denbies Estate, near Dorking in Surrey, is the largest vineyard in the UK, extending to 100ha of which 60ha is harvested mechanically. The company bought a reconditioned Braud SB60 in 2007 and it remains the only self-propelled unit in the UK.

The SB60 harvests 25-30t of grapes in a 10-hour day, whereas a team of 20 handpickers will average 6-9t in the same time period. However grapes destined for sparkling wine still have to be handpicked because the pressing process is different. Incidentally, 1t of grapes will produce 650 bottles of wine.

Harvesting starts at the end of September and lasts for a month, with white varieties picked first, followed by red. Operator Tony Potter says he likes the machine’s low level of wastage but cleaning down between varieties can take as much as three hours.

Harvesting grapes is a highly weather-dependent business, says assistant manager David Fallon: “We don’t like to harvest in the rain or in very wet conditions. Although the machine is capable of working in the rain, the hoppers on either side are open to the elements and we don’t want to dilute the grape juice.”

The Braud’s two hoppers hold 1t of grapes each and the fruit and juice is transported to the winery in 8t stainless steel trailers, which neatly match the 8t capacity of the press. A pto-driven pump pushes the juice through a pipe into the winery reception area.

The winery processes grapes from a number of neighbouring vineyards whose output is too small to justify the fermentation tanks and bottling equipment. It produces white, red, rose and sparkling wine and typical yield is about 3t/ha.

Could you drink an acre of wine in a year? That acre produces 1.2t of grapes which in turn makes 650 bottles of wine – so best to take it slowly over a number of years.