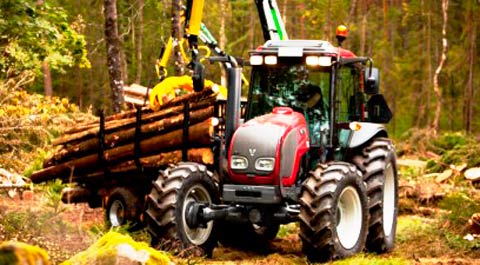 Finnish tractor maker Valtra has upped the spec of its small A Series tractors to finally give buyers the firm’s HiTech powershuttle instead of the usual synchro shuttle.

The announcement should be good news for anyone wanting to use a loader, a task for which a synchro shuttle is virtually becoming a must. In fact Valtra reckons the move will double A Series sales.

There are other improvements to the A Series tractors, too. A hydraulically-controlled button-operated two-speed pto replaces the previous mechanical one and Valtra’s Autocontrol electronic linkage is standard.

The cab is now a better place to be, too. It’s 60mm wider and the floor has been dropped, the doors are wider and the steering wheel and seat have a bigger adjustment. The pedals are now pendant ones and there’s also a low-roof available.

Power comes from the same 3.3 litre common-rail Sisu engine used in the existing A72 though it now gets a viscous fan to cut fuel use and cruise control is available as an option.

Valtra’s mid-power (130-200hp) T Series tractors get some engine changes too, thanks to the progressive arrival of new Stage 3B engine emissions standards. All tractors over 170hp now have to have either SCR or EGR to keep their nitrous oxide and particulate levels down.

What’s the difference between the old and the new? Chiefly, it’s the first appearance of Sisu’s second-generation Selective Catalytic Reduction (SCR) system which meets the tougher Stage 3B emissions standards.

The first version came on the market in 2008, appearing on both Valtra S Series tractors and Massey Ferguson 8690 models. This second generation uses the same technology but power and torque are up a bit, as is transport boost.

There’s also a new colour screen in the armrest (replacing its hard-to-see predecessor) with day and night settings. This can be used for front hydraulics, rear hydraulics or both. Headland management system settings can be modified more easily, too, and pto and 4wd rockers switches are now incorporated in the armrest.

On the GPS front, T Series tractors can now be bought in either autosteer-ready form or with it already fitted. Likewise, AgCommand (Agco’s new telematics + GPS tracking package) is now available.

This may be the Finnish make’s 60th anniversary, but Valtra is keen to concentrate on the future rather than the past. At a gala dinner to celebrate six decades of manufacturing, it showed a 1:5 scale model of its ANTS concept tractor.

This is intended to be a modular system, with one module of 130hp and the other of 260hp. The two units can work separately or in tandem and the cab can be fitted to either of them.

Like other tractor makers, Valtra is having to make the difficult prediction as to what power source tractors will be using several decades hence. Standard mineral diesel of the sort we use now will almost certainly be either unavailable or prohibitively expensive.

The technologically simple alternative is an internal combustion engine running on either farm-produced biogas or farm-produced biodiesel. Fuel cells and battery power are also possibilities, and could be recharged by an on-farm wind turbine or PV panel array. However they will need a lot more development before we see one whirring (or maybe whistling) up and down the fields of Britain.