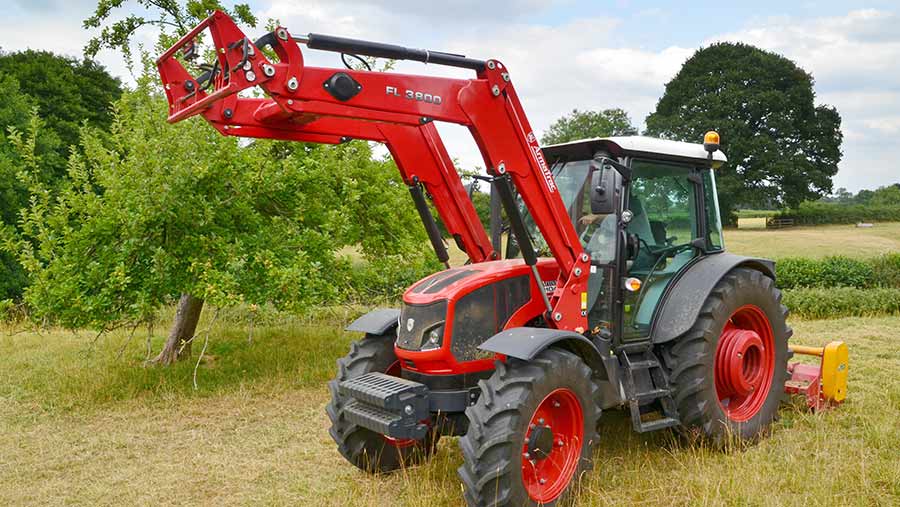 Turkey has become something of a hotbed for small tractor manufacturing and one of its most recent exports is beginning to make headway in the cost-conscious UK market.

The Armatrac 1104 is currently most powerful tractor in Erkunt Industries’ line-up and has been sold in the UK and Ireland for the last three years. In that time, the business claims to have shifted more than 300 predominantly basic, scraper-spec machines.

But the larger models are now reported to be finding favour, particularly with livestock operations looking for a low-budget loader tractor. And at £36,000 for a fully-loaded 1104 with 2t loader, it certainly seems good value on paper.

OK, so the cab trim might be a bit rough around the edges, but the Turkish company has managed to shoehorn loads of mod-cons into its flagship 1104 model – standard spec includes four spool-valves, hydraulic linkage levelling and top-link, air-brakes and a four-speed pto.

There’s nothing too radical in the running gear department – just a 3.4-litre Perkins four-pot bolted to a simple mechanical ZF gearbox and back-end, with a Carraro beam up front. (The engine is actually a re-badged Iveco-derived FPT block – look closely at the castings and scrape back a bit of paint and any engine geek will spot the Italian heritage).

Using a well-known power plant and running gear will appeal to the UK market and provide a bit of confidence for prospective buyers.

The ZF transmission is a two-range, four-speed box with a clutchless hi-lo splitter and mechanical shuttle making for 16 ratios in both forwards and reverse.

They all slot into place pretty easily and the tractor has all the poke needed to haul a small trailer or mixer wagon, while the splitter is useful for field work and removes the need to de-clutch.

Disappointingly, there was an unmistakable whine from the gearbox in the top split on the road, which would be pretty difficult to live with for long periods of time. That’s complemented by a migraine-inducing racket when the engine spools up to get the pto running at 540rpm.

Armatrac says that the noise issue was a specific problem with our test tractor and it has since been resolved. We sorted the problem in the short-term by running any pto driven implements at much lower revs, made possible thanks to the four-speed pto box.

Our test tractor had a factory-fitted parallel lift loader with a beefy two-tonne capacity. Made in Turkey, it bears a striking resemblance to similar Quicke models.

It’s a big lump and a bit cumbersome, sticking a long way out in front of the tractor. However, it lacked nothing in muscle and, with rear wheel weights, the whole outfit felt pretty well balanced, even with two 400kg bales on the spikes. 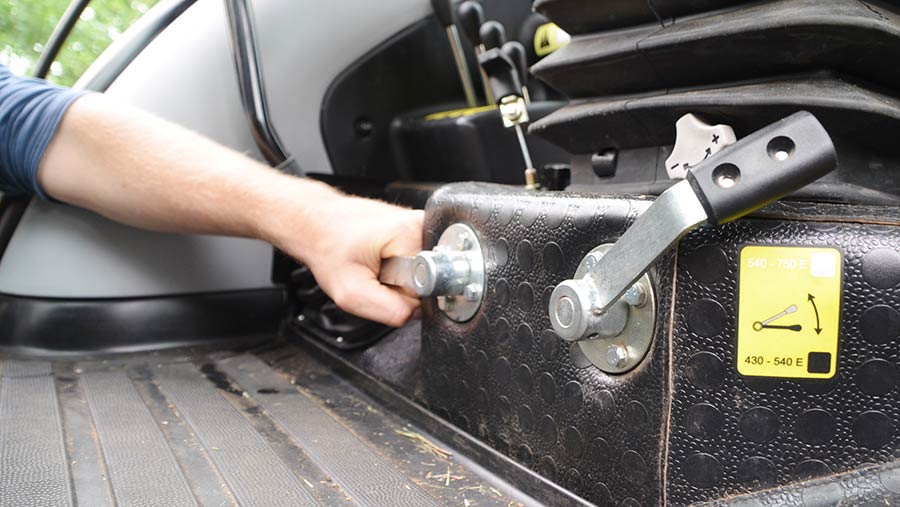 The cab is spacious and there’s plenty of room to either side to store lunchboxes and the usual tractor-related tat.

The long-throw shuttle is positioned alongside the main gear lever and loader joystick and means one hand has to deal with all the levers and knobs to change direction, gears and operate the loader. It would be much better to have it to the left of the seat.

A tidily put together blister-pad lighting control panel takes pride of place on the right hand console where you might usually expect to find more critical controls. Instead the spool-valve levers, pto and Bosch electronic linkage set-up are tucked away down low alongside the seat.

Probably the most confusing of all the controls are the two selector sticks for the four-speed pto – 430, 540, 540E and 1,000. The position of the levers are within kicking distance of the seat and can be knocked out of gear during operation, which we did a few times.

For the pto to work at the right speed, the two levers have to be aligned, and it takes a few minutes to work out how to do this. We found it best to crawl around on the cab floor to get a proper view of the dials, which is far from ideal.

Despite the lack of user-friendliness here, the dash automatically recognises the selected speed and shows when the shaft is spinning at the required revs.

A neat touch is the fold-away passenger seat which tucks out the way down beside the left hand wheelarch. The flat cab floor is another bonus and there’s a nifty airline in the rear right corner so that dust and debris can be blasted out at any time. 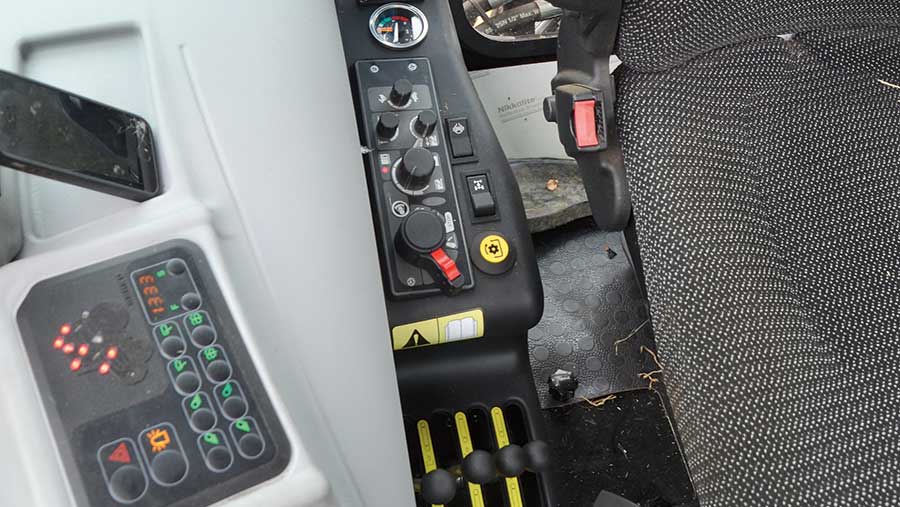 Armatrac’s 60-litre/min hydraulic package is unremarkable, but it didn’t struggle with anything we asked of it.

The tractor packs a pretty full-spec plumbing package with four spools, hydraulic linkage levelling and a hydraulic top-link. As much as the last two features are nice to have, we’d politely suggest that their expense would be put to better use up-speccing the Dromone hitch to a telescopic unit.

Equipped with Bosch electronic controls, the 5t rear linkage has plenty of lift capacity and benefits from hitch damping when running with mounted machines on the road – a feature you wouldn’t normally expect on a budget tractor. 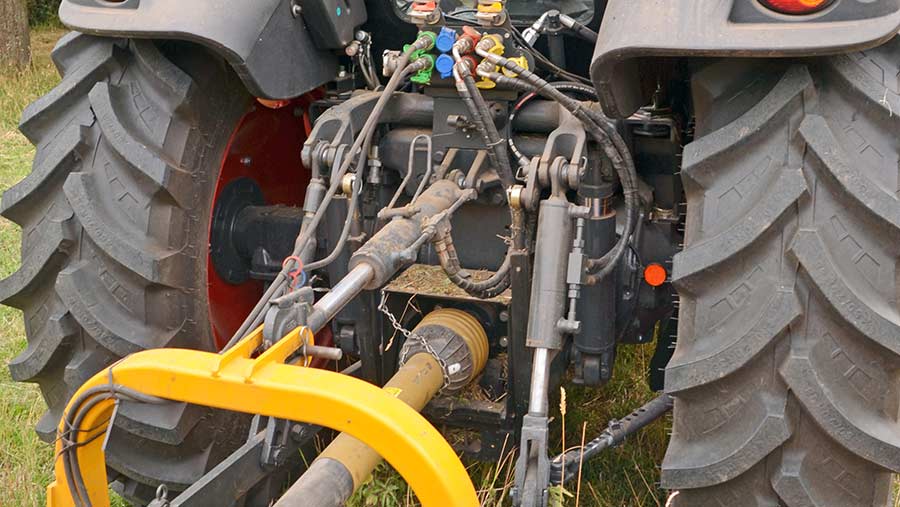 Badge snobs may well greet the Armatrac with an upturned nose, but the reality is that this tractor will do most jobs just as well as a fully-specced Fendt, John Deere or New Holland for a fraction of the price and in only marginally less comfort.

Of course, the test will come five years down the line when the warranty has long gone and bits are starting to get tired. With time-proven components from well-known suppliers, we’d hope it should prove as reliable as anything else, but will obviously be worth far less than the big brands when it comes to selling on.

Overall, we were pretty surprised by its overall spec level and on the grapevine we hear that it’s set to get better – at Lamma expect to see front axle and cab suspension as well as the addition of a clutchless power-shuttle for the ZF transmission.