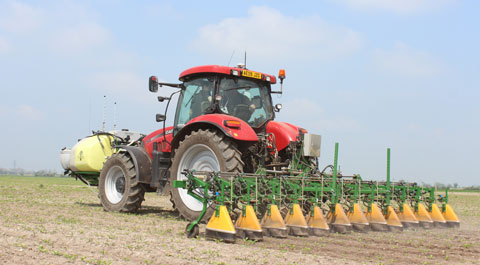 Cambridgeshire arable grower Edd Banks has invested in a custom-built band sprayer that could cut his herbicide bill in half and give his resistant blackgrass a hammering.

“This means you’re not wasting expensive selected herbicides on areas with no crop,” says Mr Banks. The sprayer is also fitted with a separate spray line to apply other chemicals to the crop at the same time.

Similar systems have been used by vegetable growers for years, but as far as we know this is the first attempt to use such a sprayer on a commercial arable farm.

Taking weed killers like glyphosate into a valuable crop is clearly a risky business, but thanks to a series of hooded nozzles – a bit like stretched road cones – the chemical is kept in its place, says Mr Banks.

The hoods are mounted on a parallel linkage with a land wheel so they follow ground contours and don’t let any chemical escape.

The area covered by the hoods can be adjusted depending how brave you’re feeling. At the moment, Mr Banks has set them to cover 20cm of the 50cm between his rows of beet, meaning he is spraying 40% of the field with broad-spectrum weed killer and 60% with selective.

He reckons he’ll be able to reverse this ratio earlier in the season though. “It’s too late this year as the plants are too big, but we should be able to increase the width to 30cm early next year.”

Keeping the machine straight is also crucial, as one nudge of the steering wheel would flick the hoods of death over the crop row. Accurate RTK guidance is therefore essential and the machine has to be locked solid to the tractor to avoid any sideways movement.

The machine’s second spray line applies selective herbicides and other treatments on to the crop itself. These on-row nozzles are mounted on adjustable arms and, unlike conventional sprayers, sit quite close to the crop at just 26cm above. This helps reduce drift.

So far, Mr Banks has managed to drive the machine up to 7kph, but he hopes to get this up to 8kph so he can spray 40ha in a day. “It’s obviously much slower that a conventional machine, but you’re doing a complete job – it also allows us to keep the area between the rows blackgrass free.”

Chemicals are carried in dual front tanks – one with a 1,000-litre capacity for the weed killer and one with 800 litres for the selective mix – which can be reversed if needed. There are also separate clean water tanks for hand washing and machine rinsing.

Trimble dealer AS Communications wired-up the system and has managed to get all features working through one Trimble FMX in-cab screen. This means both spray lines, all blockage sensors, the high definition front tank cameras and the RTK guidance are all managed and viewed from one screen.

The machine will be used to spray all of the farm’s 60ha of sugar beet and 285ha of oilseed rape. Mr Banks says two year’s chemical savings should cover the initial investment.