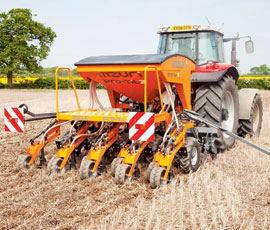 If ever there was a year for promoting the benefits of conservation tillage, 2011 is it.

The wet autumn and staggeringly dry spring has caused problems for those wanting to drill both winter and spring crops, and has encouraged growers to look for alternative establishment methods. One such grower is Martin Lole, who farms just over 162ha (400 acres) of arable cropping near Evesham in Worcestershire.

Having previously started the hedge-cutting and flail manufacturing company Spearhead, Mr Lole is no stranger to designing his own machinery.

Having had two back operations, he knew that conventional establishment methods – such as ploughing, power harrowing and pressing – weren’t sustainable for his health, or indeed his pocket. “We farm extremely heavy yellow clay land which requires a great deal of breaking down to create a seed-bed.”

He believed that a no-till system, with conservation tillage at its core, was the answer. “This involves tillage of the specific area where the seed is to be placed, while the rest of the field and previous crop residue is left undisturbed, preserving moisture, organic matter and providing shelter for the germinating seed,” explains Mr Lole.

Having tried disc-type drills, Mr Lole found these not to be ideal for his clay soil. “We tried repeatedly to establish rape. However, this dried out the clay on top too quickly and seed failed to germinate.”

He settled with the development of a new tine-only drill, called the Mzuri Pro-Til.

At the front, there is a row of three legs, each with a negative rake, a leg that’s narrower at the front and wider at the back. “We tested any number of different designs, but found the others to pull up clods into the area we wanted to place the seed.”

A further four identical tines follow in the next row, with spacings 30cm to 33cm (12 and 13in) apart depending on the width of the machine (the larger 4m model has 11 tines instead of nine).

Directly behind these tines is a row of individual packer wheels with reversed tread to stop blockages, each measuring 20cm wide. Mounted on a walking axle, these wheels are able to apply equal pressure across the width of the machine to reconsolidate the strip destined to be drilled.

Following this “reconsolidation zone”, 12cm (5in) wide tine coulters cut through this band, spreading seed across the width.

“We tried both disc and tine coulters, but the wet weather we had in the autumn convinced us that tines were the way to go.”

After the seed has been drilled into this strip, a semi-pneumatic wheel reconsolidates the soil once again. The last three components on each tillage train are mounted on a vertical pivot point, allowing the coulter to stay in the middle of the previously tilled band regardless of the topography of the ground.

The new drill has enabled him to adapt his crop rotation to enable more profitable crops to be grown, he believes.

The savings are not only in being able to get rid of pieces of kit, either. “Labour and fuel bills are drastically reduced.”

Mr Lole believes that he has saved £100-150/ha by not ploughing, power harrowing or pressing. “I reckon it now costs between £20 and £25ha to drill ground. By cutting fixed costs, like machinery and growing profitable crops, it’s possible to make a small arable farm profitable.”

While OSR is the obvious crop, Mr Lole has also drilled wheat, barley, beans and even linseed using the method, and is in the process of planting maize for neighbouring farmers.

“The linseed went into bone-dry soil, yet the drill still drew up moisture behind the leg which created an almost perfect seed-bed.”

Crops drilled last autumn show uniformity that Mr Lole is particularly pleased with. “My bugbear is not being able to get the same yields form the headlands as we do in the field. I’m a stickler for keeping compaction and travel to a minimum, so to be able to yield well on headlands is a big bonus for me.”

“Winter wheat is performing well despite the lack of rain. Plants are strong and, despite not being sprayed due to the weather conditions, show little traces of disease.”

Rape is also doing well, with a growth regulator applied early this spring.

• See the drill for yourself at Cereals 2011 on Wednesday 15 and Thursday 16 June on stand F601. For more Cereals information, go to www.fwi.co.uk/cerealsevent or find out more about the cost savings and how the drill works.