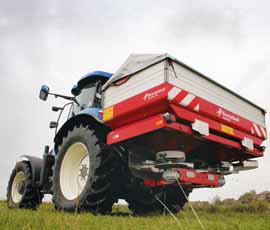 Technology, as ever, keeps moving forward. The latest generation Kverneland precision seeders will not just space seed accurately along the row but can line up rows perfectly for reliable mechanical weeding in two directions.

With an individual electric motor drive for each seeder unit on the Kverneland Monopill SE and Optima e-drive, and on the Vicon Unicorn SD, sensors registering the position of each seed cell wheel work with RTK-precision position control to align the seeds perfectly across and down the field.

“This high-tech approach ensures that each plant has optimum growing space,” points out Graham Owen, Kverneland product manager. “It also means in salad, vegetable and other crops such as sugar beet, precision hoeing can be used for weed control both between and within the rows.”

Operators can choose whether to drill in a grid or diamond pattern. The latter provides the most growing space per plant but mechanical weeders would have to work at an angle to headlands. It will also prevent rows overlapping where they meet at an angle, which eliminates seed wastage and makes such areas easier to harvest.

The added equipment for the seed drills and the software required to operate it are part of a package of GPS technologies developed by Kverneland Group engineers to exploit its IsoMatch Tellus universal terminal.

This Isobus-compliant device is unusual in providing two full-size displays – so operational details of a crop sprayer can be shown at the same time as a trace of where the machine has worked. Normally, either two terminals are needed or the operator must toggle between two displays on one device.

Promoted under the iM Farming banner, the new software includes GeoControl, which provides both section control and variable rate control on a crop sprayer, fertiliser spreader or seed drill and job recording for farm management software. 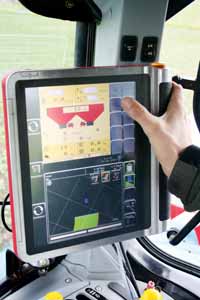 The Vicon iXter, iTrack and iKarus crop sprayers are now equipped to take advantage of the section control facility, which can be used to minimise wasteful overlaps where tramlines converge. It also provides accurate on-off switching when approaching and departing a headland.

Apart from the obvious environmental and crop-protection benefits that come from saving the operator having to judge nozzle switching by eye, Kverneland engineers calculate pesticide cost savings of between 5% and 15%, depending on the shape of the field and the type of materials involved.

Auto spreading width control is possible with GeoSpread versions of the Kverneland Exacta TL-ISO and CL-EW fertiliser spinners and their Vicon equivalents, the ROM-EW and ROXL-EDW.

With the addition of electric actuators on the width and rate setting mechanisms, the GeoControl software will again minimise anything beyond the normal double-overlap application.

“Adjusting the spread width in 2m sections is achieved by adjusting the point at which the material is released on to the spreading vanes,” explains Vicon product manager Andrew Bowley. “It automates the mechanism that an operator uses to set the width on a standard spreader.

“An important feature of GeoControl, though, is that it also adjusts the flow to ensure that the correct application rate and pattern is maintained, regardless of changes in the width of spread,” he adds.

By also switching the spreader on and off accurately at headlands, Kverneland reckons users could see 2-10% savings in fertiliser use.

“Another benefit is that these automated systems reduce the operator’s workload and stress, while enabling him to do a more accurate job – and that has to be worthwhile,” suggests Mr Owen.

Section switching is a standard feature of the Vicon sprayers, while adding this facility to a spreader, precision seeder or large grain air drill (for half-width shut-off) is £675 a time.