This week What’s in Your Shed pops to Suffolk to visit contractor Derek Keeble who specialises in muck and digestate spreading, baling, hedgecutting and straw covering vegetables.

Read on to find out about their best and worst purchases, most expensive repair bill and why Heath bale chasers have become a favourite bit of kit when it comes to dealing with straw. 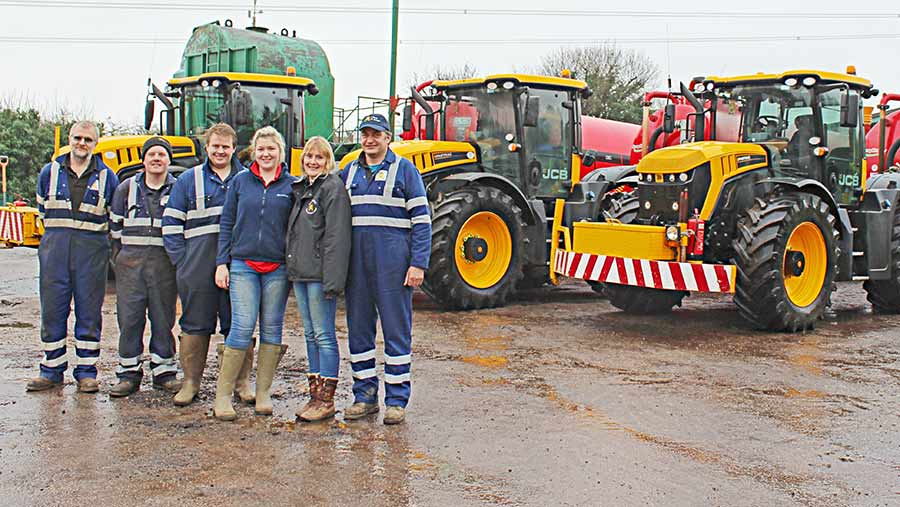 My dad started contracting in a small way by doing a few jobs for local farmers. In the early days that included cutting back river banks with a scythe and a bit of hedgecutting.

We’ve gradually grown from there really.

See also: Take a trip around the UK with our What’s In Your Shed? map

What muckspreading equipment do you run? 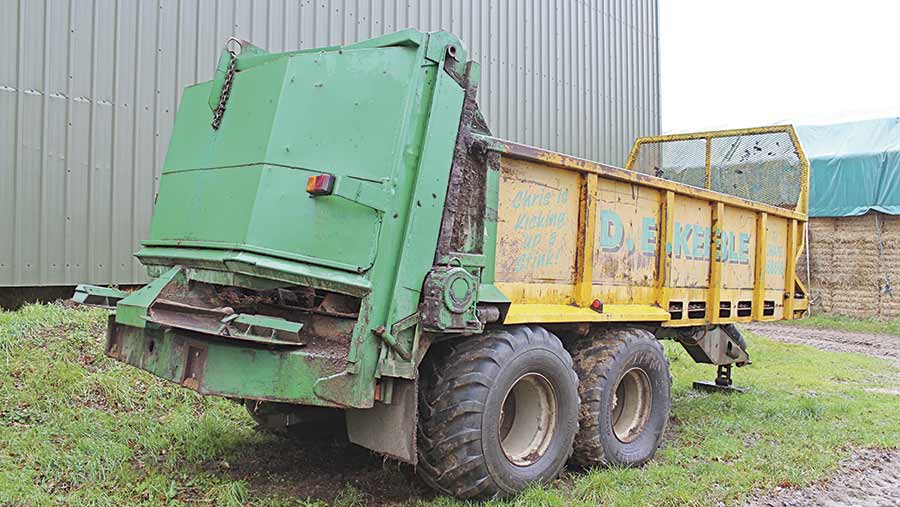 We’re still using two rear-discharge spreaders we built from scratch about 15 years ago – one’s 14cu m and the other 18cu m.

These were based on an old Bonhill muckspreader chassis and we added our own bodies, floors and four vertical rear beaters.

These were made up using Maschio power harrow blades and we balanced them on our big old Second World War lathe.

We also made removable hoods housing a pair of twin discs so that they could accurately spread chicken muck.

They work by the vertical beaters throwing the muck into the hood before it drops on to the discs. We’ve also got a 16cu m Agrihire spreader, which is a well-built machine. 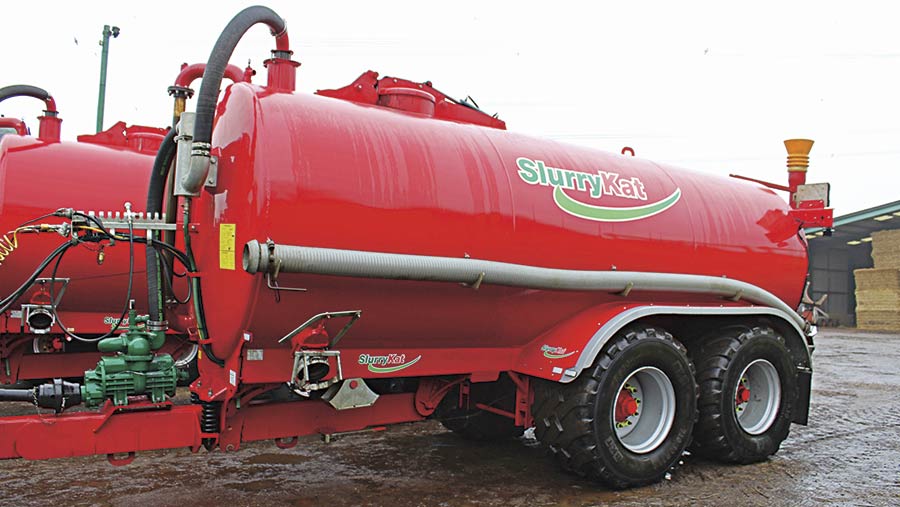 We picked Slurrykat as they seemed the best built machines on offer.

I’ve been pretty loyal to JCB over the years. I think the new 4000s are brilliant tractors (particularly for the work we do) and it’s nice that I can support a truly British brand.

I’ve also got three 541-70 telehandlers, which are good machines. The only wobble was when JCB brought out the 3200-series Fastracs with the Protronic gearbox.

Those were terrible and we switched to running Claas tractors for a few years.

We’re lucky to be served by some good dealers round here, but it’s the people they employ that really make the difference.

Sean Josselyn is the mechanic at P Tuckwells who looks after our JCB kit and we’d be seriously stuck without him. He works flat out to keep our machines running sweet, which is a demanding task during harvest.

Mark Debenham, the salesman at P Tuckwell, also needs a mention. All my JCB deals go through him and he understands where I’m coming from – it’s not often you get that. 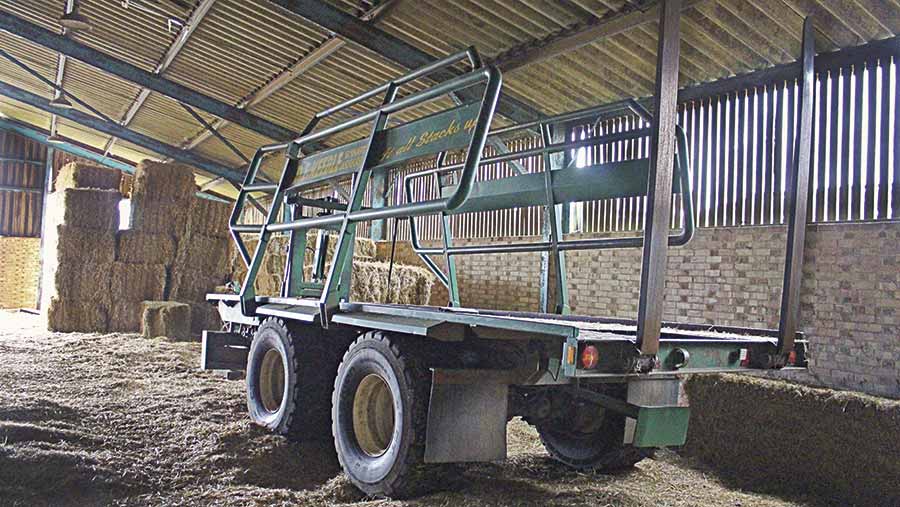 Our Heath bale chasers have to be my favourite as they’ve transformed the straw job for us. Before, we were using artic lorries and telehandlers, which was slow and expensive.

When we got the first chaser in 1996 it more than doubled our bale-stacking speed. Now we’ve four 10-bale chasers that have been modified to take all three of the bale sizes we produce.

As standard, they take 10 4x4s, but we can also fit on 14 4x3s and 21 3x3s. For the 4x3s we built tipper sledges on the balers that lay the bales on their sides, and for the 3x3s we fitted an extending pick-up fork so we can put an extra layer on top. We also made some hydraulic side gates to squeeze the smaller bales in place.

The small square baler, which we’ve now sold. There was nothing wrong with the machine itself, but the process is just so tedious, particularly with the massive windrows you get behind a combine with 35ft header. Every time I got it out I’d be full of nostalgia and looking forward to it, but after blocking it for the umpteenth time I’d soon think: “What the f**k am I doing this for?”

We’ve got a 1976 Bobcat that Linda’s dad used to use for mucking out at his dairy unit. We redid the pins, bushes and ram seals when we got it, and it’s still going strong on about 8,000 hours. We mainly use it for delivering straw to customers with horses. 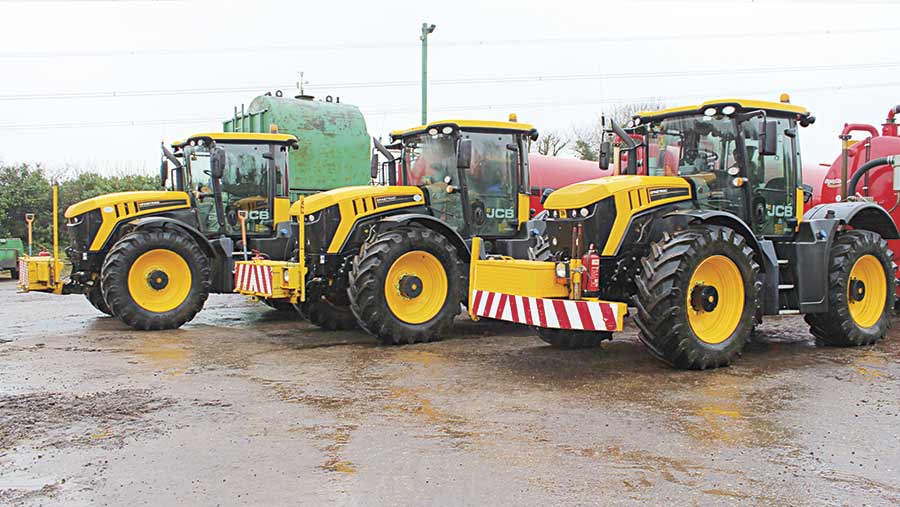 We keep most machines as long as we need them, apart from the JCB Fastracs which we change every year. I run three all year, but buy another three just before harvest so I’ve got six when I need them. Then once harvest is over the three older machines get traded in.

At the moment I’m getting the new ones for about £120,000 and trading in the old ones for about £95,000 with 2,000 hours on the clock. I’ve worked out that’s the cheapest way I can do it. The tractors come with one year’s warranty, but we upgrade that to two years so they’re still covered when we sell them.

We’ll probably get another 3×3 baler to help keep up the pace.  We’ve always had Hesstons or the Massey Ferguson-branded version, so the new one will be red too.

We tend to buy ex-hire machines and run about 100,000 bales through them. Gary Needham from Big Bale Services looks after them for us and works from dawn ‘til dusk every year to give them a pre-harvest service.

When I was just starting out I had a job cutting hedges for a chap and thought I’d ask if he wanted some ploughing doing too.

Unfortunately, on my way up to the farmhouse the hedgecutter boom caught and pulled down a power line to a mobile home in the yard.

Understandably, he wasn’t best pleased and he told me he’d just taken on a worker to do the ploughing so I was out of luck anyway.

However, the next morning I had a phone call to say the ploughing job was mine.

Apparently his new bloke had turned up for work in such a foul mood (due the fact his mobile home had no power) that the farmer sent him packing. I had the ploughing job there for the next seven years.

I used to have a Renault 145-14 TX that landed me with such an expensive repair bill it nearly put me out of business. I bought it off ECF for £11,000 in 1985 and it was my first attempt at running a big (ish) tractor. It had done about 4,000 hours when I bought it and it was lovely to drive for a tractor of that era.

Anyway, about three months later I was power harrowing with it when one of the main bearings went in the transmission. It sent iron filings and crud through the entire back end and landed me with a £14,000 repair bill.

We’re always making and modifying machines in the workshop, but our best invention has to be building a model UFO. We were approached by the Forestry Commission to build a replica of the craft sighted in Rendlesham Forest in 1980. It took ages, as we had to interpret various drawings and explanations from the people who saw it.

I’m also pretty proud of our specialist hedgecutter that we made out of a 14t Doosan excavator. It can cut to 10m high and has a flail head as well as a saw blade and grab.

Without our workshop we wouldn’t be where we are today. When money has been tight it’s meant we’ve been able to repair, rebuild and invent our own machines so we can still make a profit. Mark Spooner is our secret weapon and he can turn his hand to making anything. Even a UFO.

We buy quite a bit of used and ex-demo machinery depending on our budget and how much work we’ve got to do.

Using the excavator saw blade is my favourite and most satisfying job. Pointless meetings that go nowhere are my least.

I’ve got a Discovery 3. It’s lovely to drive and has plenty of power, but it’s one of the most unreliable vehicles I’ve ever owned. It’s almost up there with the Renault 145-14 TX.

Thankfully we’ve found a great independent Land Rover expert who keeps it going for us. It’s managed to get to 125,000 miles now.

We had a pair of MB Trac 1500s that were fantastic. We did 15,000 hours in them and they gave us almost no trouble, apart from the synchro on the gearbox, which was a common problem and easy to fix.

I can’t think of any real bargains, but we’ve done really well out of our home-made kit. It costs us less, does exactly the job we want it to and is built to last.