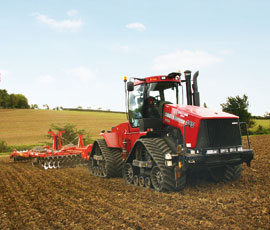 There’s a lot to consider when you buy a new machine. Will it do the task it’s intended for? What will its residual value be at the point when it is ready to be replaced? Most of all – can you afford it?

Determining what is and what isn’t affordable is never easy, however for all farming businesses there is a level of investment that is appropriate to their size, enterprise spread and profitability.

According to Gary Markham, director of agriculture at accountancy firm Grant Thornton and author of the book A Blueprint for Machinery Management, most arable farms will have a capital cost of about £568/ha (£230/acre) excluding fixed assets such as buildings.

This figure fluctuates from year to year, so it is important to consider the capital cost as an average over the working life of the machine – five to eight years in most cases.

You can, of course, reduce this cost by pursuing efficiencies of scale through sharing arrangements such as contract farming or machinery syndicates.

“Although the absolute figure for capital investment will be higher on larger units, in terms of cost per hectare the figure should fall as the business expands. The typical capital value of £568/ha can be reduced through machinery syndicates for example. We would expect to see this cost fall closer to £456/ha (£185/acre) for those businesses above 607ha (1,500acres).”

Although depreciation on most farms should be 18% of that £568/ha figure mentioned, ie £102/ha, which is reflective of what is actually happening in the business, the target depreciation is 18% of £456/ha, or £82/ha.

That means a farm business should reinvest on average over a five-year period the annual depreciation in the value of the machinery; however, it should be the target depreciation and not the actual depreciation.

By adopting a capital budgeting policy, farm businesses can tailor the level of investment to the farm size, while also planning cash requirements in a way that avoids the problems caused by the unplanned expenditure associated with a major breakdown.

Having said that, it is often difficult to justify purchasing a machine purely on cost grounds, since its value to the business can be difficult to quantify.

The principal machines employed on the farm are a Claas Lexion 770 with 12m cutter bar, a Challenger 865 and Challenger 95E. The farm employs six full-time staff plus a foreman, with a contract sugar beet harvesting operation helping to keep staff busy.

While cost of operation is an important consideration for Mr Goodchild, he believes it should not be the overriding focus when devising a machinery policy. “Low costs are desirable, but it should not become the principal concern. The aim is to harvest the crops in good conditions with quality preserved and in a timely manner that allows good establishment of the following crop.”

The pressure to harvest such a large area in a short period could be alleviated by growing later crops, such as beans, but Mr Goodchild has good reason for sticking to the existing system. “We follow the cropping pattern we do because it is profitable for us to do so. We also have to consider the logistical and storage challenges that arise from farming land of ours and that of others over a 15-mile radius.”

“The 580s were due to be replaced after the 2010 harvest, and the change to the combinable crops area, as well as recent advances in combine technology that have driven increases in capacity, meant the move to a single combine was a feasible proposition. At the time of purchase we also made provision for a hire combine should we fall behind schedule.

Brothers Pete and Richard Burbage run an agricultural contracting business in central Northamptonshire that majors on grass and maize silaging, muckspreading and straw baling over an area of 2,000ha (5,000 acres). The baling service is a sizeable operation in its own right, consisting of two Claas Quadrant 3200s and a Massey Ferguson 2170 large square baler making about 35,000 bales a year.

Keeping pace with these high-output machines – and ensuring the customer can get on with cultivations – is a big task. The business clears roughly 6,000t of straw a year – made up of 18,000 bales for its own business selling straw to a merchant for use as animal bedding, and to customers for use in their own businesses.

To speed this task, the Burbages bought a specialist Arcusin bale chaser at a cost of £78,000. It’s a difficult machine to justify financially, Richard concedes, but straw baling is a core component of the Burbage business and if customers are to be retained then fields must be cleared quickly and efficiently.

“As contractors we trade on our reputation and we simply can’t afford to hinder the customer’s harvest. The Arcusin means we can clear fields quicker than would be possible with loaders and it causes significantly less compaction for our customers, many of whom pursue a one-pass cultivation strategy. I doubt that we would be able to retain the majority of our customers if we didn’t use a bale chaser simply because of the extra time it would take to complete the job and the frustrations this would cause.”

Richard reckons to clear no less than 1,000 bales a day, and in one long day managed to clear almost 1,600. To achieve this under the conventional means of using loaders with tractors and trailers would require significant additional labour and probably make the job economically unviable.

“It’s difficult to give an exact cost, but we estimate a net cost including fuel and other variables of £1.60-2.00/bale depending on the distance to stack. Using loaders with tractors and trailers to match the Arcusin’s output would easily eclipse this figure.”

The farm is spread across three holdings, with the land in two main blocks about 25 miles apart with a third unit of 160ha (400 acres) in the middle. With so much distance to cover between holdings conforming to highway restrictions of 3m widths for un-escorted vehicles was a major factor when the farm evaluated the available high-horsepower tractor options.

The farm is now on its second Case Quadtrac, a 492hp STX 485 (list price of £227,965), which is the principal draft machine, preparing all land with the exception of the sugar beet ground, which is ploughed using a conventional tractor.

“Making the move to a Quadtrac was a simple decision for us. We had the scale of operation to justify it and with most of the land cultivated in a single or at most two passes, we didn’t require numerous expensive attachments to go on the back of it,” says Mr Smith.

With the Keeble cultivator operating at a depth of around 14in, it can hardly be regarded as a shallow cultivator. But at 3.5ha (8.6acres) an hour it still covers the ground at a rate equal to that of a 14-furrow plough set at 16in furrows, travelling at roughly 5 mph. In a typical 14-hour day it can be expected to burn 800-850 litres of diesel.

“If we weren’t running a Quadtrac we would probably run a tracklayer of another sort, but we prefer the Quadtrac as it does less damage to the soil surface than a conventional crawler when turning on the headlands. We did try a similarly sized wheeled machine earlier this year, but it failed to match the forward speed of the Quadtrac by about 1.5kph.

“To achieve similar tractive effort of the Quadtrac we would have needed to go for a higher horsepower machine that happened to be of a comparable cost, so the price premium associated with a Quadtrac was not that great in reality.”