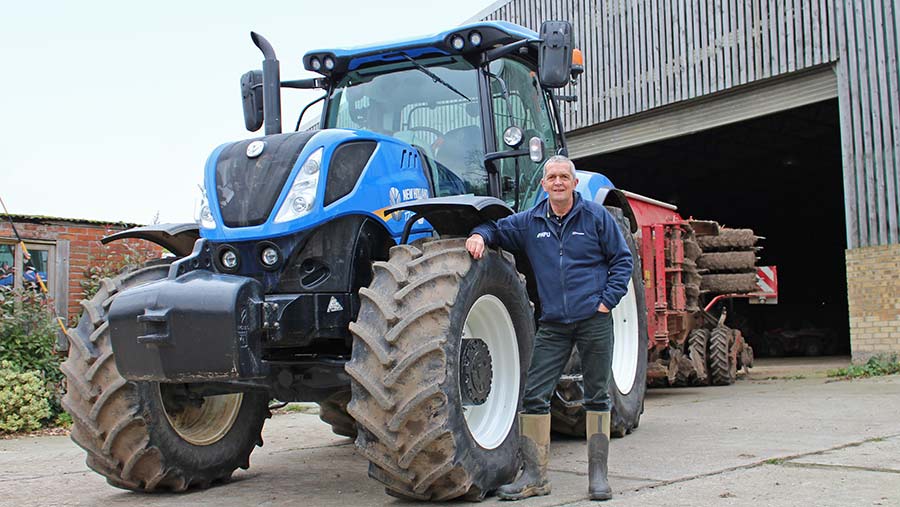 In a special “celebrity” edition, our What’s in Your Shed series visits NFU’s deputy president Guy Smith at his farm near Clacton, Essex.

Being deputy president means Mr Smith is now a self-confessed weekend farmer, spending upwards of four days a week on the road away from the farm with the NFU.

To help him out, a local contractor takes care of the spraying workload during the year, but combining is still a job Mr Smith takes care of when the politicians break for summer holidays.

I started my tractor driving life in a blue tractor and I’m pretty loyal to New Holland now. Like me they are Essex built and true to my Essex roots I’ve been promiscuous in the past, but I usually come back to New Holland.

I like the fact they are built just down the road in Basildon, but I’m also aware the engine is from Belgium, the gearbox is Italian and the cab is French. Hopefully there won’t be an issue with getting parts when we leave the EU.

See also: See all our What’s in Your Shed? articles here

Ernest Doe. It’s the local dealer and gives good service. Some of the mechanics have been coming out to the farm for decades, which admittedly must feel like a life sentence of hard labour for them, but I think Does looks after its employees and they look after me.

The nearest stores are in Colchester, which is thirty minutes up the road, so we can have parts back on farm within two hours. We’ve been dealing with them for generations and I like the fact they are a family firm just like us.

They are also great supporters of the Essex Schools Food and Farming day, which I’ve been involved with over the years.

They provide all the demonstrator kit for the machinery zone. It’s been good to see them doing their bit to help promote our industry to the schoolchildren of Essex.

Having just spent the day field walking, at this moment in time it’s the Sulky spinner. We spun rapeseed into a standing wheat crop this autumn, then chopped the straw over the top and it has established really well.

Having said that, our Horsch drill has done a good job this year, with decent establishment after a dry autumn, and seems to handle direct drilling or ploughed land equally well. 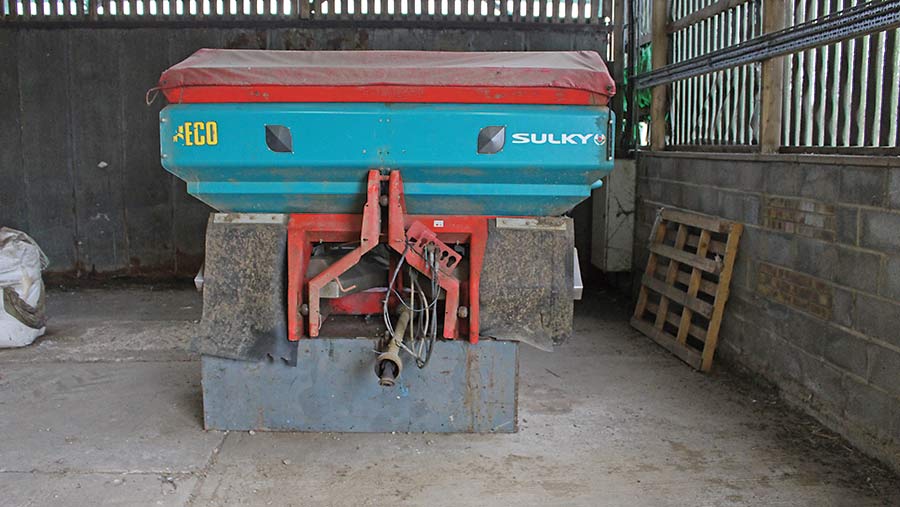 The plough, although there is nothing wrong with our five-furrow Lemken. I try to use it as little as possible, but behind and in front of crops like potatoes and sugar beet you can’t get away from it. Also, I’m a terrible ploughman.

A New Holland T7.260 tractor that arrived in June. It’s our only tractor on 263ha and does a bit of contracting as well. As a lone machine, reliability is top of the list.

The ride is comfortable and the 230hp (with the 270 power band) gives us the power we need for heavy draught work such as pulling our Simba Solo on stiff clay.

We have put 800 hours on it already. It has a New Holland Intelliview GPS guidance system, which took a bit of time to get used to, but now it gives us good accuracy.

The 2005 Manitou telehandler. It’s still going strong, needing very little repair or maintenance. We can load lorries out in less than twenty minutes and even helped a local remote community with a bit of snow clearing last March.

I call it Napoleon because it’s unfaltering and French. It’s yet to meet its Waterloo.

There is no strict policy. I chopped our previous New Holland T7 in when the three-year service warranty ran out. However, the combine has just finished its tenth harvest in good order and I hope it will carry on for several more. 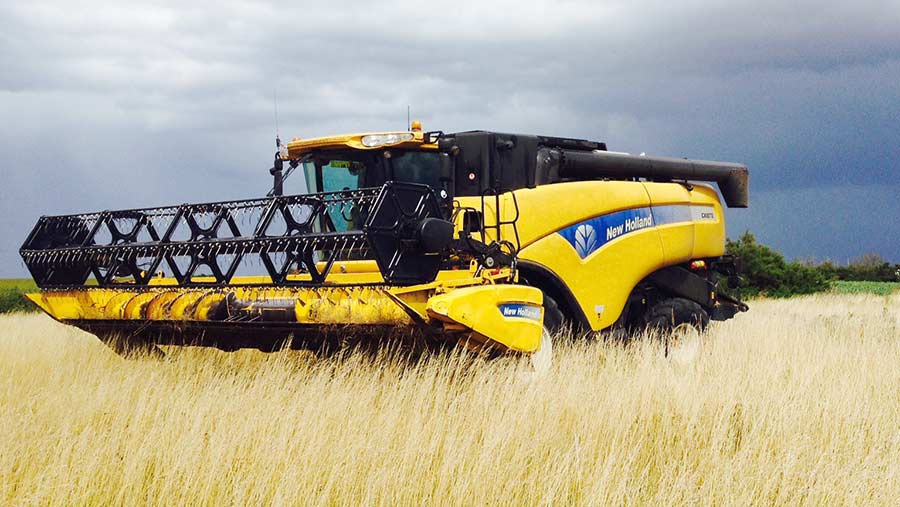 I’m conscious that there are big advances in telemetry and robotics that I’m not keeping up with. When I stand down or get voted out of the NFU, I’ll have time for some much-needed training.

I once tried to combine the head of a well point in a rape crop. It left the header with just enough of a banana shape to need a whole new unit.

Fortunately, NFU Mutual covered the insurance and Ernest Doe supplied a new machine the next day. The only downside was I made the crucial mistake of doing it in view of the neighbours, who have the loudest jungle drums in the county. It was also the most expensive mistake, but the main cost was reputational. Some neighbours swear they’d heard about it before it actually happened.

You’re talking to the wrong generation, as my dad was the fabricator and was always welding bits onto kit in the hope of improving them, although I’d despair at times as warranties would be invalidated.

I’d say the results were rather mixed. His home-made discharge augers that located onto the back of trailers meant we were one of the first farms to handle fertilisers in bulk in the 1970s.

However, his cunning plan to turn the grain dryer into a grain wetter in the famous drought year of 1976 was less successful, with wheat emerging either unwetted or looking like porridge. I remembered this fondly during harvest this year when the grain and oilseed rape were coming in ridiculously dry.

I did once design my own crop management recording and costing programme on our first Apple Mac in the eighties, which I was very proud of.

A decent fitter. My current staff member is Andy Lane and I wouldn’t be without him. He’s an asset in the workshop, where I’m a complete liability.

He likes the mig welder. I’m more of your “club hammer” mechanic. I’m not bad at stripping machinery down, but significantly worse at putting it back together.

I like combining. It’s the culmination of the year, where you learn what you got right and what you got wrong.

Our CX 8070 is a pleasure to drive and has had few breakdowns. It’s probably over capacity for our 263ha, but when you consider we grow mainly high-quality milling wheat and don’t have a dryer, it’s good to have a reliable machine that can knock down 35ha a day when crops are fit.

As for least favourite jobs, the experience of cleaning out wet, rotten wheat in the elevator pit with a bucket on a 15ft rope will always be with me.

When Dad allowed me to start taking the reins, the first thing I did in an act of vengeance was fill it in, changing the setup to a flat store. Anyone doing jobs like that nowadays should be put on some sort of register.

I would like to come over all virtuous by saying my mountain bike because I end up sitting down most of the week when with the NFU, so I need to take any chance of exercise I can. But actually it’s a battered and bruised 2010 Mitsubishi L200.

I learned to drive on a Ford 4000, so that has a place in the heart. But I’m as happy with the current New Holland T7 as I’ve been with anything before.

Worst tractor you have ever had?

We bought one of the first Fastracs in the early nineties, which was a revelation on the road, but clearly wasn’t made for fieldwork, as we kept breaking it in half. I suspect it was a bit of a prototype as I hear they are now much improved.

Not really – I’m the oldest thing that lurks in the shed – but actually the shed itself is an old wartime hangar from an airfield in Suffolk with a single-span 25m roof.

It used to house Spitfires and Hurricanes that saved us in our darkest hour, so should keep my fleet well sheltered. 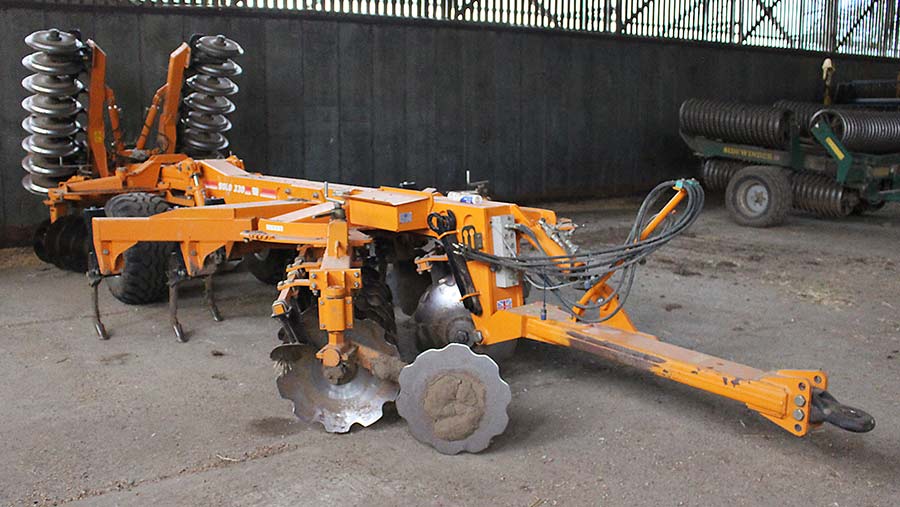