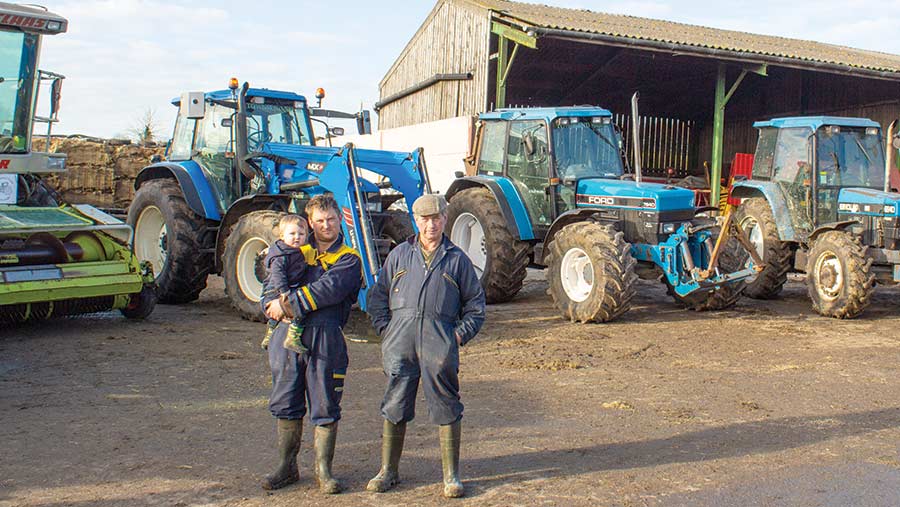 This week’s What’s in Your Shed? revisits Dorset dairy farmers Paul and Andrew Gould, who first appeared in these pages in 2014.

We find out what has changed over the past five years.

What’s happened since we last saw you?

This is nothing to do with machinery, but shortly after your last visit, we suffered a major TB outbreak. We lost six cows and all but two of our heifers (37 in total), and it’s taken us until now to recover.

Thankfully, the badger cull has been successful in our area, with new breakdowns down 50% – we’re hopeful we won’t have to suffer losses on that scale again.

We’re also renting a bit more land, taking us from 65ha to about 90ha, and have upgraded our balers to do more contracting work. 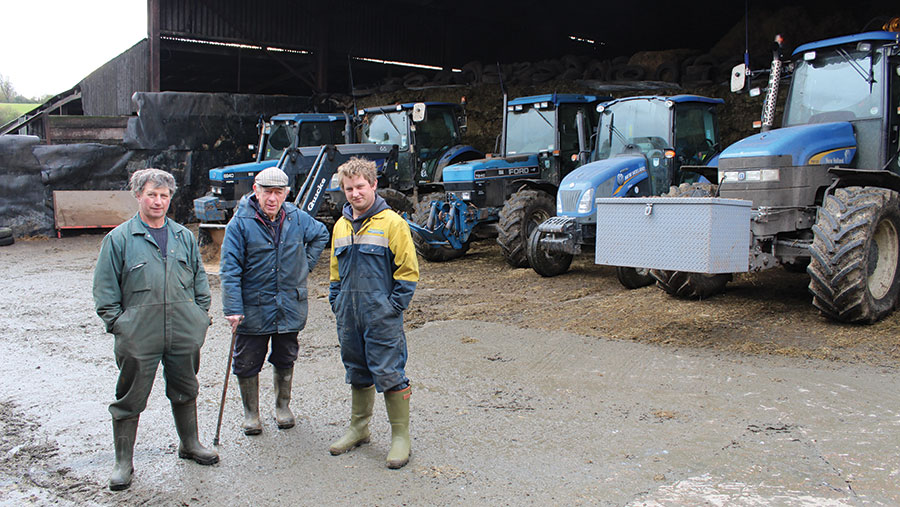 How has your tractor fleet changed?

The only tractor we’ve sold is our TM155, which had already had an engine rebuild and was beginning to give transmission trouble.

It was only on 5,400 hours when the engine went – one of the valves got embedded in a piston and trashed the head – but we had tweaked the pump so that it was putting out 190hp, rather than the original 150hp. 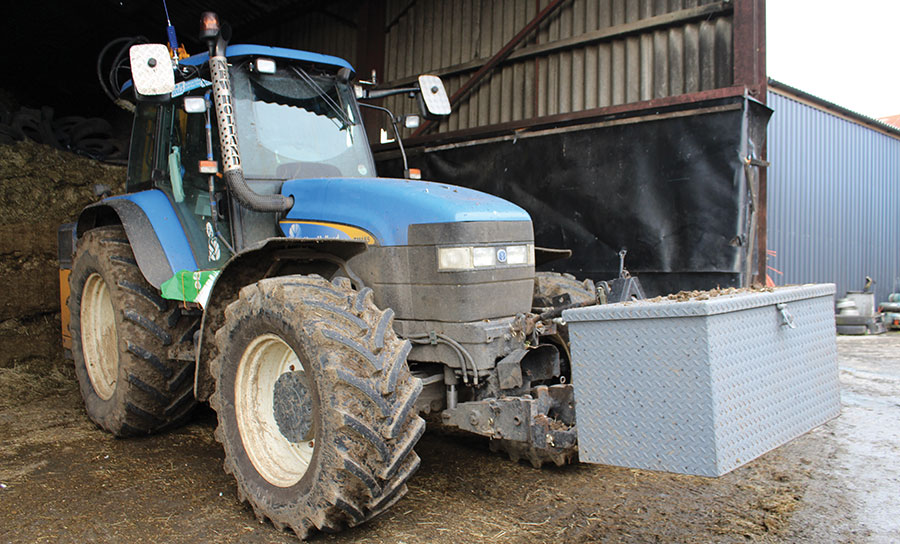 We did another season with it and put about 800 hours on the clock, but then the Range Command gearbox also started giving trouble.

This coincided with our local dealer, C&O Tractors, having a tidy T7040 Auto Command in stock, so we decided it was time to upgrade.

This is our first tractor with a CVT transmission and is so much nicer to drive than the Powershift. We’ll definitely be looking for another next time we swap a big tractor. 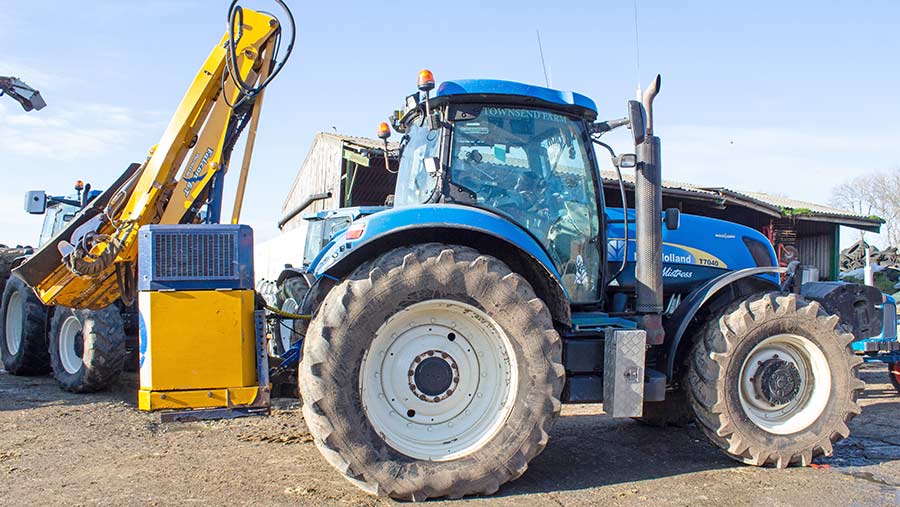 Because we’ve taken on some more ground and upped our contracting acreage, we needed another decent-sized tractor that didn’t cost a fortune. We were also keen to reduce the workload for our Ford 7840, which is now on 14,000 hours.

This will lift about 3.5t, so it will compete with a lot of telehandlers for lift capacity. 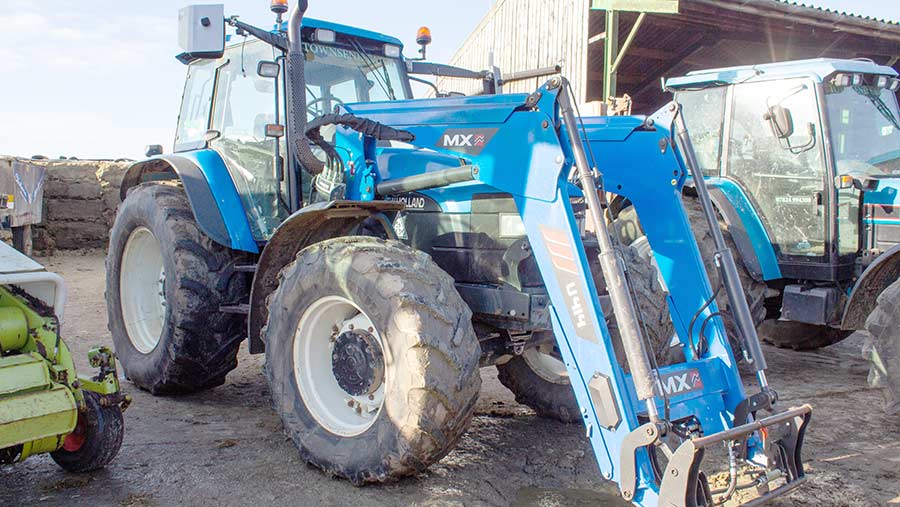 Another addition is this New Holland TM165 with MXU414 loader fitted

What about grass and forage kit?

We had put a new set of mowers on our wish list and that was the first thing we changed. The old Pottinger front-and-rear setup was getting pretty tired, and we were keen to get a bit more output.

A few makes were on the cards, but we ended up going for a 9m set of Lely triples that has given us a big boost in output. We also swapped our eight-rotor Kuhn tedder for a 10-rotor version.

Our old 1983 Welger conventional baler has also been upgraded to a New Holland 645. The Welger was a great machine, but we wanted to increase output, and that meant going for a machine with a wider pickup.

Four years ago, we also got a New Holland D1000 so we could expand the contract baling side of the business. It’s a 1990 model with 153,000 bales on the counter, but it hasn’t given us any problems.

The 2x3ft bales are also a good equine size and we’ve been producing a bit of haylage.

We still have our New Holland 644 round baler, but we’re thinking of trading it in for a BR560.

Tell us about your six-cut silage regime?

We had been doing five cuts for several years, but the switch to six has significantly improved the quality of our forage and increased yield.

Our target was to get 12ME and 18% protein, and we are just about achieving that. Yields have also gone up by almost 25%.

The key to the system is getting fertiliser timings right, and we try to get the first dose on in mid-February. The second main dose is timed for mid-March and we do top-ups between each cut.

Slurry applications are also carefully timed, and we have carried out some nutrient analysis to get the rates right.

If the weather is playing ball, we will do the first cut in the last week of April and stay as close as we can to a 30-day cutting regime, making sure dry matter is about 30%. The last cut will often run into November.

The system would be too expensive if we had to call in a contractor on a per-acre basis, but thankfully we are now geared up to do it all ourselves. Our output is about 8ha/hour and that means we can cut and clamp our entire 50ha area in two dry days.

The last of the bottlenecks was our old covered clamp, but 18 months ago we got a new outdoor clamp with plenty of space to tip, which has shaved about 4mins off each load.

Good-quality grass is also crucial, so we reseed one-third of the area every year with our own four-variety mix. This includes a mix of perennial and hybrid ryegrasses that all have heading dates within a day of one another.

It’s backfired a bit this year, though, as the wet weather has meant most of it hasn’t come up. Hopefully we’ll be able to broadcast some seed in late February and we will get some warm weather to get it going.

Any changes for the cows?

In 2014, we invested in an auto-dipping system, which has shaved about half an hour off our milking times – it was well worth the £20,000 investment.

It’s timed to go out every hour and the fact that the cows always have feed in front of them means milk yields have gone up by 1.5 litres a cow. 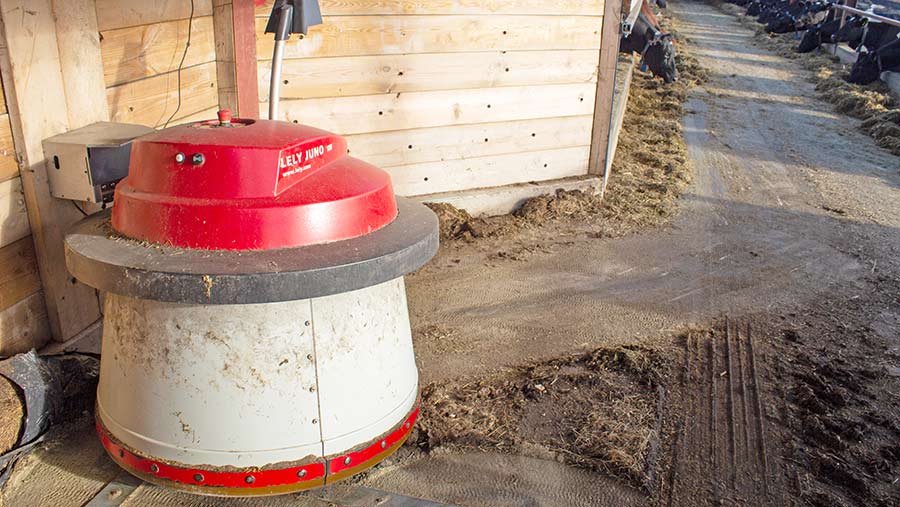 In the dairy shed, a Lely Juno on a one-hour cycle is helping raise milk yield by keeping feed available

How has your slurry management changed?

We retired our old up-and-over slurry stirrer and fitted a Storth jetter that does a good job of preventing a crust forming.

Stirring was never a fun job and the old thing kept breaking, so this has been a big improvement.

With a 682,000-litre capacity, our store is only really designed for an 80-cow herd, and that means we are pretty pushed for capacity at times.

However, we’ve bought a second-hand version of the same store and we’re planning to bolt another ring on the top – hopefully it will line up.

The other change has been to swap one of our 9,000-litre Redrock tankers for a 13,500-litre Agrinat Challenger. It’s fully galvanised and, at £6,000, we thought it was a bit of a bargain.

When it arrived, we fitted a 6m Tramspread dribble bar and together the outfit has cut our slurry spreading time by one-third.

Our biggest expense was fitting the forager with a new accelerator. In the past, it had been replaced with a non-genuine part, which was worn and well out of balance. The genuine part cost £6,000.

We also had a fire behind the cab that was caused when we sharpened the knives. Unbeknown to us, there was a small hole in the spout and enough sparks came out to ignite the dry grass that had gathered behind the cab.

There was a frantic search for a water trough, but thankfully we managed to extinguish it before it did any meaningful damage.

The first thing we’re hoping to do is fit a slurry separator, so that we can make better use of our dribble bar. However, we don’t have three-phase electricity, so we’ll need to get a generator to run it.

When we do manage to get one, we’ll also probably invest in a Shelbourne Reynolds side-discharge muckspreader to deal with the separated solids.

In an ideal world, we would like to get our cow numbers up to 200, but it’s hard to find the land in our area. We would also need to add some new cubicles and increase our slurry storage, but all that is achievable.

The Goulds at Townsend farm

The Gould family has been milking cows for more than 90 years and has owned Townsend Farm since 1931.

Father and son Paul and Andrew Gould are the third and fourth generation, milking a closed herd of 170 British Friesians and carrying out contract forage harvesting and baling in the summer.

After studying at Kingston Maurward college, Paul started working at the farm full time alongside his father, John. That was in 1971, and at the time, they were milking 60 British Friesians and had 32ha of grassland.

By the time Andrew joined the business in 2004 – having also attended Kingston Maurward college – cow numbers were up to 140, but they weren’t carrying out contracting work.

Since then, cow numbers have gradually crept up (apart from 2014’s TB setback) and they have developed the contracting side of the business, going into partnership with a neighbour to buy and run a self-propelled forager.

Andrew also has an 16-month-old son, Thomas, who he hopes will be the fifth generation to milk cows at Townsend Farm.

Thomas’s great-grandfather, John, is now 88 and was actively involved in the farm until fairly recently.