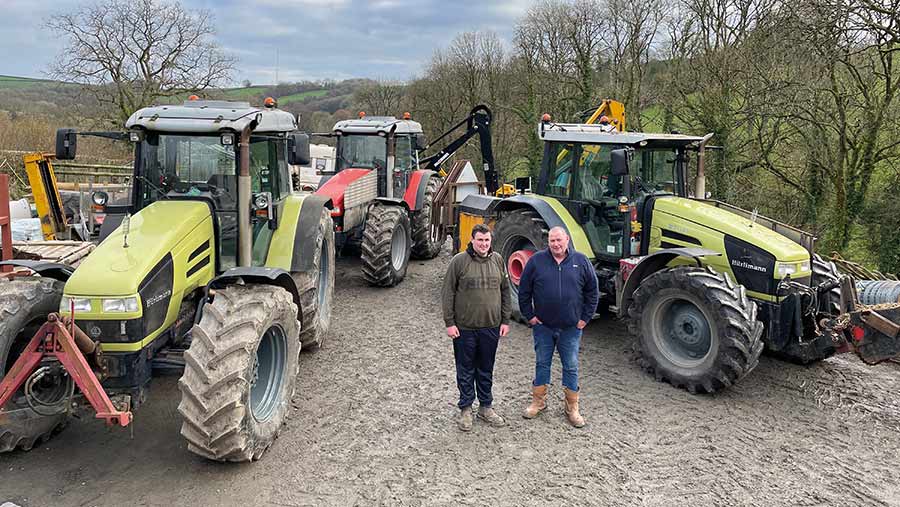 Our What’s in Your Shed series heads into Carmarthenshire, to visit contractors Peter Morris and Sons.

Peter: After years of working for other contractors, I decided to set up on my own in 1999. I bought a second-hand International 844 and Bomford 48 hedgecutter, which was a great, simple combination that got me up and running.

I gradually upgraded the machinery and branched out into fencing, digger work and wood chipping.

Since Dafydd joined the business we’ve added an extra hedgecutter and gone up to three tractors. My younger son Owain is also starting to get more involved, and my wife Heulwen does all the paperwork. 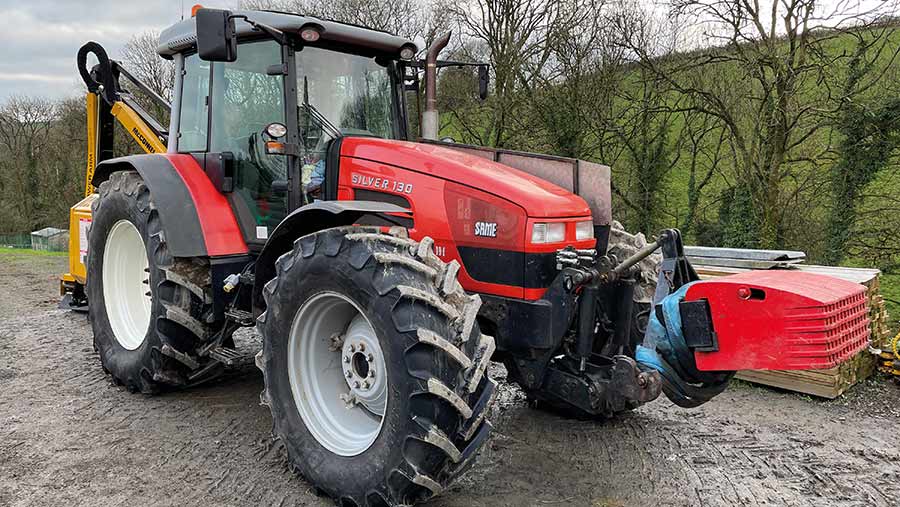 The first Same tractor arrived in 2003, a Silver 100.6, and we’ve stuck with them ever since. They’re simple, reliable machines that are nice to drive, cheap to run and pull well.

The three tractors we’ve got now are all from the early to mid-2000s. One is a Same Silver 130 and the others are Hurlimann XT-130s but, apart from the badge and paint colour, they’re identical.

The same tractor was also badged as a Lamborghini Premium 1300 and we’d happily have one of those.

On the hedgecutter front, we’ve settled on running McConnel machines after a bad experience with our last Bomford.

We use a lot of different dealers in the local area and they’re all good. JE Rees & Sons, AR Harries, Riverlea and J Davies & Son are where we go for most machinery and parts, but we also use some smaller firms for various bits and pieces.

A lad called Mike Sharp does our air conditioning, we use an independent mechanic, Cliff Jenkins, to help with repairs and we get bolts, oils and such like from David Harris and DO Hughes.

Both are great to drive and they’ve got big, comfortable cabs, unlike the cramped Portaloos you get on most of the competition.

We’re not the smallest lads so we need a bit of space to move around and stash our gear. 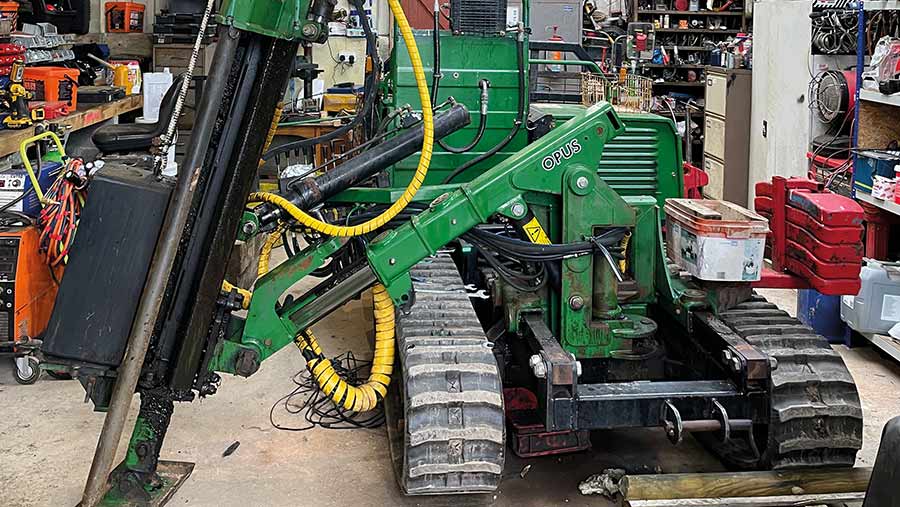 Our Wragg self-propelled post knocker is also a top machine. It has a knocker with 300kg weight mounted on a Yanmar tracked dumper and it’ll go almost anywhere.

We tend to use our main Bryce Suma knocker to put gateposts and strainers in and then this takes over for the intermediates. It makes it a one-man job and frees up time for us to do other work.

Staff Peter, Dafydd and Owain part-time, and Heulwen on paperwork

We haven’t got a machine we don’t like right now, but we used to have a Bomford 48 Electric hedgecutter that was a pile of junk. Everything went wrong, from the pump and gearbox to the electronic controls.

It’s a shame it was so bad, as the standard 48 we had before was a solid bit of kit.

We also had a Quickfencer for a while, but never got on with it. Most farmers around here still use mild steel netting, and it would stretch the middle wires unless wooden spacers were wedged in the clamp.

As well as that, it was a pain having to cut the wire every time you needed to get around an obstacle. It was soon moved on and we went back to using our home-made unroller and separate tensioner.

The most recent is a Greenmech 220 pto-driven wood chipper. We bought it as we were often having to hire one in to clear up behind our digger-mounted tree shear.

Apparently, it will take timber up to 9in in diameter, but we only put 6in through it, which it handles easily. Anything larger than that gets cut up for firewood.

The 9t Takeuchi excavator was also new this year and we bought a McConnel PA6565T trimmer last year. This was an upgrade from the PA55 we had before and the extra 1m telescopic reach makes a huge difference.

We also specced it with an Orbiter head, so we can cut up close to the tractor, and a hydraulic roller, which is handy for verges and running along fences.

The only downer is that the Evolution controller isn’t proportional like the V4 we had on the PA55. As a result, we’ve put taps in some of the lines to slow down certain functions. 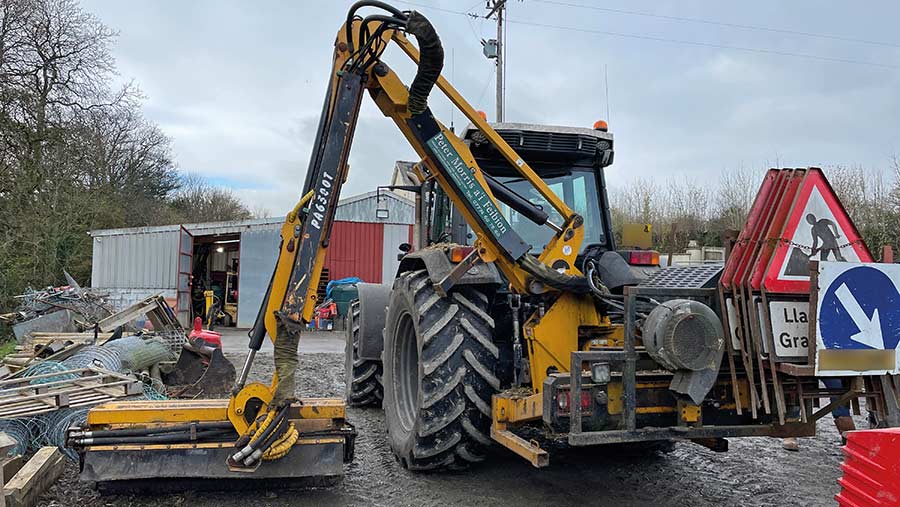 We’ve got a McConnel PA6500T hedgecutter from 2003 that’s still going strong. It’s done thousands of hours’ work and has had plenty of replacement parts over the years, but the base machine is bombproof.

It even spent a good chunk of its time on a rotary ditcher, which is tough work.

We’re not planning to change it anytime soon and if a gearbox or pump goes, we’ll just replace them. I think the only thing that will finish it off is if the electronic controls pack up and they are uneconomical to repair.

It’s got the complex V4 setup with proportional controls and a separate box with screen for setting up some of the functions.

Most stuff stays with us until it is knackered, too expensive to repair or we fancy a change. We used to buy the odd new tractor, but now they’re too expensive and too complex for us to consider.

The plan is to keep the current three going for as long as we can and snap up any other good examples that come up for sale. That’s getting more and more difficult though.

Dafydd: I’d love a dumper truck with a cab as I’ve had a gut full of getting soaked on the open ones.

Peter: I’m usually in the new digger keeping dry, so that isn’t top of my list. I bought him a new set of oilskins, so I don’t know what he’s complaining about.

Nothing major thankfully, but we’ve both had brain fade with the forklift we mount on the tractor’s front linkage for shifting posts around.

Peter pulled it over by driving off with the hydraulic pipes still attached and Dafydd has knocked it on its side a couple of times while trying to pick it up with the A-frame.

The crank snapped in our 2007 Hurlimann XT-130 when it was on 4,000 hours and well outside its warranty. Thankfully Hurlimann helped by footing the bill for the parts, but we still had £4,000 of labour to pay for.

It’s been as good as gold since and goes better than the other two, so we can forgive it that.

The problem might have been caused by a weak oil pump, which we used to have trouble with when we ran the hedgecutters on the 1000 pto.

The low revs seemed to put the pump under strain and, over time, the pressure would start to drop. Since we’ve been running on the 540e setting, we haven’t had to change one. 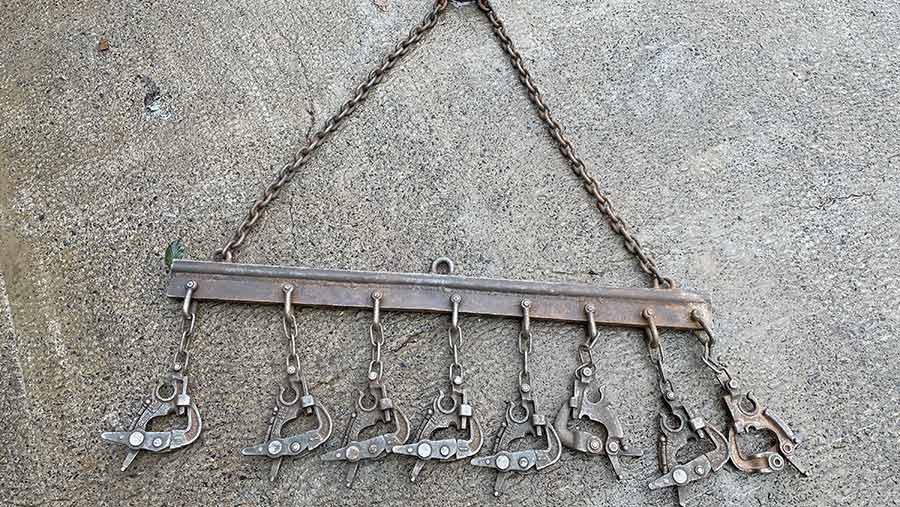 Peter: I made a simple wire tensioner that uses eight monkey strainers mounted on a bar that grip each strand of wire individually.

The other side of the bar has a chain attached, which we hook to the digger and back up to tension it.

There’s also a loop for a winch to hook on to that we sometimes use instead. It does a great job of pulling the wire evenly and it’s neat to carry around.

Monkey strainers are expensive new, so I trawled around the local farm sales until I had enough second-hand ones.

We also have a separate home-made wire unroller that mounts on the digger. It holds a single roll of net, which we can drop off easily when we get to an obstacle.

We then hand ball the roll around the obstacle and pick it back up again to continue with the run.

One of the biggest time savers for us has been ditching the hammer and upgrading to battery-powered staple guns.

We’ve got a KMR and a Senco, which both work well and run off the same battery packs.

We also use cordless Dewalt circular saws and impact wrenches for cutting and screwing rails, rather than using hand saws and nails.

We’re only in the market for second-hand tractors these days, but we still tend to buy new diggers and implements, as used ones are often rough.

Dafydd: I like all the jobs we do, apart from driving dumpers in the rain.

Peter: Hedgecutting and digger driving are my favourites and I hate knocking posts into old wire. 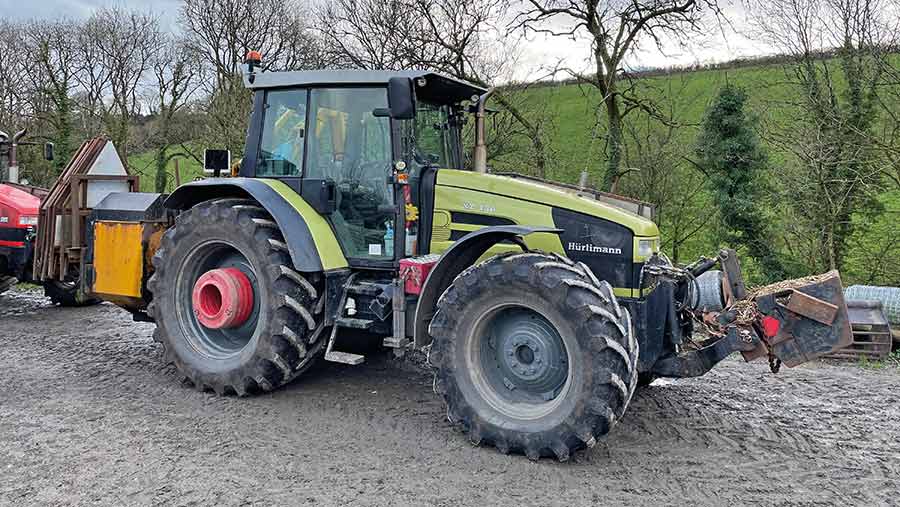 The 2007 Hurlimann XT-130 is the best, even though it had a snapped crank early on (see most expensive repair bill).

It’s now on 16,000 hours and has cost us very little considering the work it’s done. Officially, power output is 130hp, but we’ve had it on a dyno and it read about 140hp.

It goes the best out of the three tractors we’ve got and it’ll out-pull a John Deere 6930 on silage trailers in the field.

The only downsides are that the small hydraulic pump makes it slow to tip a trailer and the transmission tops out at 40kph. The cab is also a bit small, so there’s no room for a passenger.

Other than the crank, the only repairs have been the brakes, which we changed at 8,000 hours due to glazing of the pads, and the clutch packs in the transmission.

These were replaced at 10,000 hours as the tractor stopped shifting into the highest of the three powershift steps – it cost about £2,000.

We also get the transmission recalibrated a couple of times a year, which is a quick job for the dealer on their laptop.

You can tell when it needs doing as the changes start to get jumpy and the tractor judders under acceleration.

We haven’t had a bad one yet. All our tractors have been simple models and the breakdowns have been relatively minor and cost-effective to fix. Some of the bills local people have had for flashier tractors are crazy, so we’re happy to stick with what we’ve got.

The 2007 Hurlimann. We bought it new from AR Harris, which is a sub-dealer for David Tunstall in Yorkshire, and it cost just £32,500.

I wish I’d been able to buy three or four of them as they’re so hard to get second-hand. 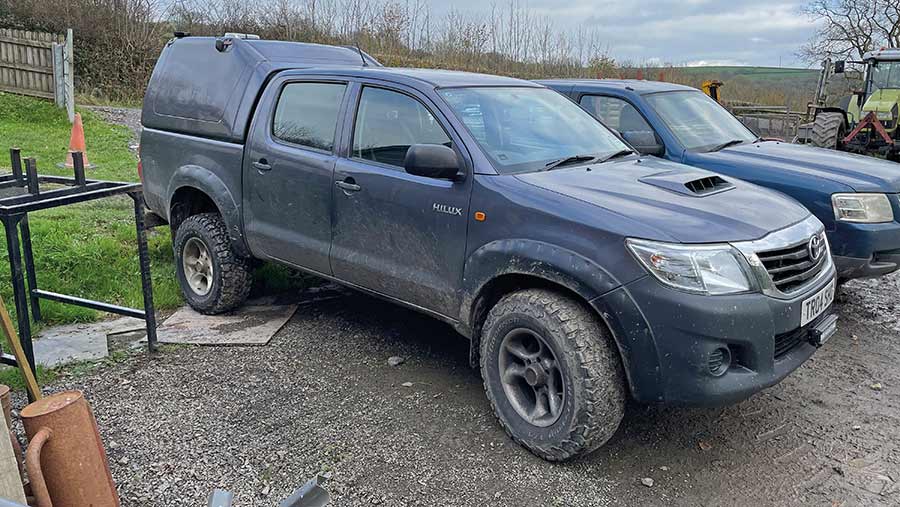 Peter: I’ve got a 2012 Toyota Hilux double-cab pickup, which has the 2.4-litre four-cylinder engine and a manual gearbox. It’s a decent truck, but I don’t like it as much as the 2006 Mazda BT50 I had before.

The Mazda could pull out of my drive with a loaded trailer in high range, but I need to drop into low with the Hilux. It was also better off road, even though they both had the same wheels and tyres fitted.

Dafydd: Mine is a 2015 Peugeot Partner van with 1.6-litre diesel engine and five-speed gearbox. It’s a decent runaround and has a lot more space than the 1.3-litre Corsa van I had before.