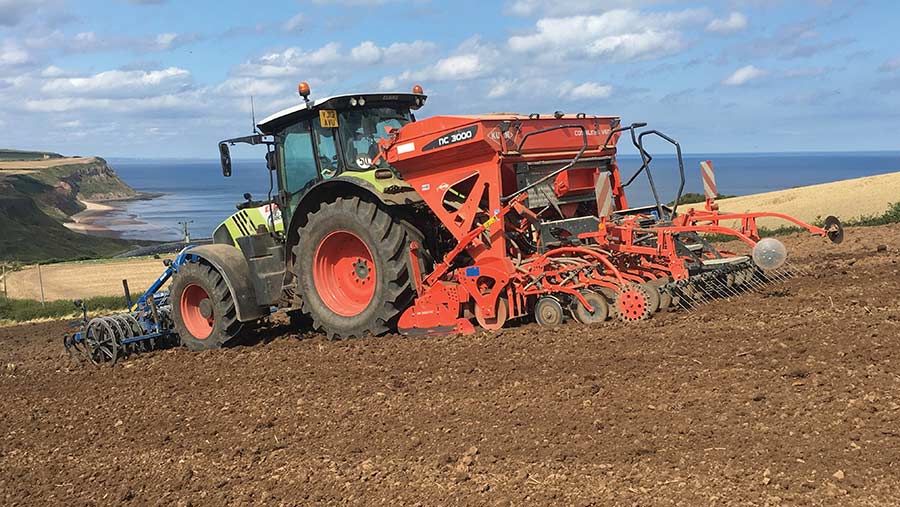 The Claas Arion 650 drilling on the North Yorkshire coast

Workload consists of slurry spreading, grassland and arable work, alongside 600 hours of winter hedge cutting. The company is based in Guisborough, North Yorkshire, and travels around 20 miles out from its base.

Are you brand loyal?
Paul: I’m New Holland through and through. We have seven in the fleet now and I have just bought one more to take our tractor fleet up to 10.

Steven: A few years ago, we bought a Claas Arion 650 which is now my favourite machine to drive. We like the Claas grassland kit and have a Jaguar forager as well.

Favourite dealer?
We rarely buy new tractors, so we don’t stick to one main dealer. Locally, Claas Eastern, Russells and Ripon Farm Services are all very good. It’s difficult to make money when running lots of new tractors, though a majority of our implements are purchased new.

Favourite piece of kit?
Paul: In the summer, it’s the Claas Jaguar but I don’t tend to get on it much. Out of season, I like nothing better than a day in one of the New Hollands hooked up to the McConnel 6070 VFR hedgecutter.

Steven: I’m a baler man, so the Lely Welger Tornado combi and the Massey Ferguson 186 big square are my favourites. 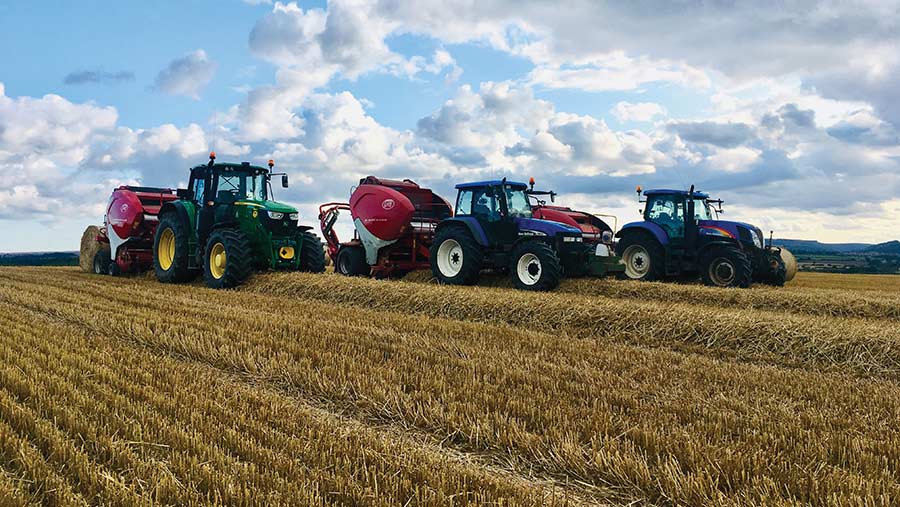 Least favourite piece of kit?
Paul: A broken one. In all seriousness, we don’t have too many as if we don’t like something, we get rid of it. We’ve had some terrible balers in the past that we were mis-sold (more on this later).

Latest purchase and what do you think of it?
Our biggest recent purchase was upgrading our JCB 416S loading shovel for an identical model that came from a contractor in Darlington.

It has covered 4,000 hours but extras such as auto-greasing mean the headstock and bushes are still really tight.

Other smaller buys include a Bunning spreader to help out with a new muckspreading contract, a Claas 3100 twin-rotor rake to ease pressure points at harvest time and, just a few weeks ago, we swapped our McHale Fusion for a new one.

We had reached a tricky point where shelling out for new parts on a baler with 60,000 bales on the clock meant we’d have to keep it for another few seasons to realise the investment.

The value of a baler in two years’ time, with 80,000 on the clock, would also have been much lower, so the deal we were offered was good enough to make us change.

Oldest machine?
A 1996 New Holland 8340 is still going strong on 15,000 hours. We’ve been planning to ease back its workload for a while and it’s on the list to have a major spruce up, but it just keeps on going.

It spends all winter on a splash pate with one of our umbilical systems. 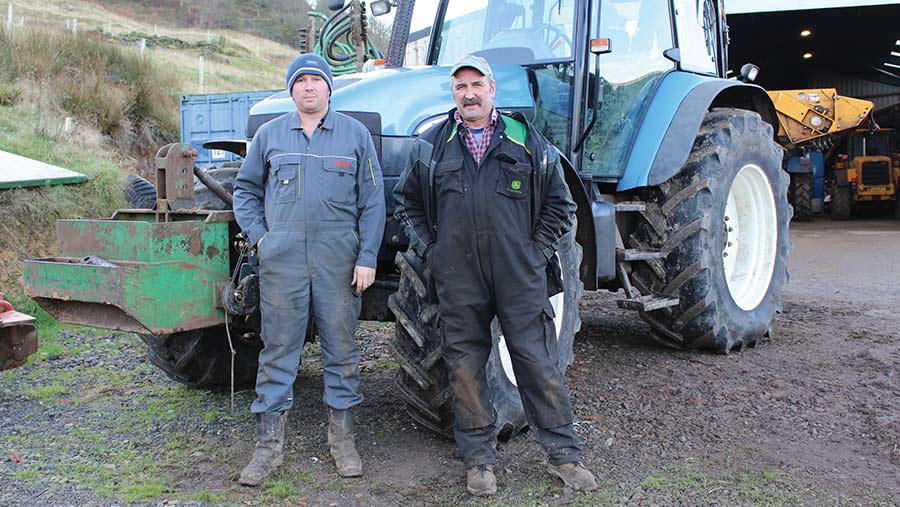 How long do you keep machines for?
There is no strict plan as we buy second-hand and look after them ourselves. Usually we’ll get them to 10,000 hours and then look at costs.

What’s next on your wish list?
An additional square baler would be handy – ideally a Massey Ferguson 2160 – but this is on the back burner with the predicted lack of straw this harvest.

Our new muckspreading contract means we also need a second loader as our shovel will be tied up on the clamp when muck needs to be loaded. A JCB 320s is on the cards, but there’s no major panic. 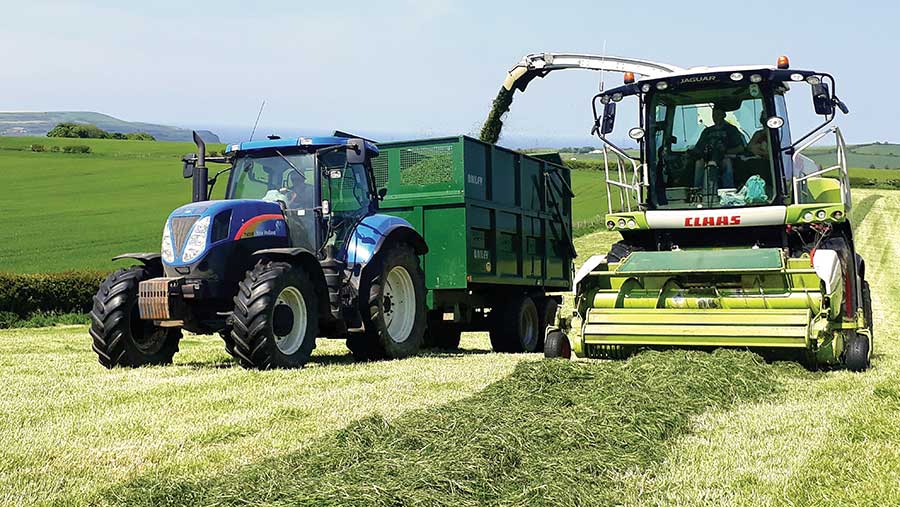 We want to replace one of our higher-houred tractors, most likely the Case Puma, which is looking tired. Again, there is no immediate rush, but we’re keeping our eyes peeled for a decent example at a reasonable price.

Most embarrassing machinery mistake?
Paul: A couple of years ago, I was rolling the clamp in the New Holland TSA and there was a gap between the trailers arriving due to a field move. I switched the tractor off, put the steering wheel up and nodded off for a few minutes.

I was woken up by an almighty thud as the TSA managed to roll off the clamp as I dozed. Luckily the damage was minimal and not too many people saw it – I got away with it, until now.

Most expensive repair bill?
Paul: Everything went wrong on a TS115. There was never really a standout big bill, just a continual flow of invoices, though the steering pump was the biggest troublemaker. We lost a lot of time working out how to retrieve it when it broke down in the field.

The McHale baler mentioned earlier cost us a lot of money, too, but it wasn’t the result of a repair bill – it boiled down to us being sold a 660 rather than a 640 model.

The main issue was pressure loss, so the bales were all odd shapes and used to slump after a day or two.

Customers became aware of it and started saying they didn’t want it on their farm. One morning, I’d finally had enough so I hooked it up, drove it back to the dealership and left it there.

It didn’t do our finance repayments any favours, but we would have lost customers if we kept using it.

What’s your best invention?
Steven: We spend a lot of time in the workshop as we do all our own servicing and make plenty of gadgets for moving slurry pipes and taps.

We designed a splash plate for the umbilical system that can operate a flow meter, as there was nothing on the market.

Paul: Probably my biggest achievement was changing the fittings on a wholecrop header from New Holland to John Deere.

Favourite job?
Paul: I take a lot of pride in hedgecutting. It also gives us some winter work – we do about 600 hours annually.

Steven: Baling is pretty satisfying when it goes well, as we can cover a lot of ground in one day. 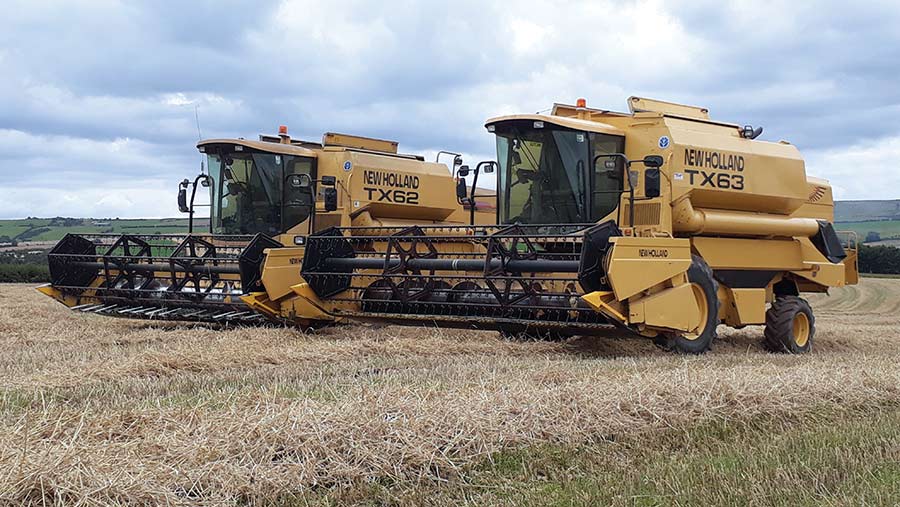 Least favourite?
We don’t tend to do any jobs we don’t enjoy. That might sound like a luxurious position to be in, but we enjoy coming to work.

Best tractor you’ve ever had?
Our 2007 TS135A is bulletproof. It’s at work most of the year, leading silage and grain and reeling out slurry pipe. In the winter it is married to one of the three hedgecutters.

Worst tractor?
The aforementioned New Holland TS115 was a nightmare. It had all manner of problems from electrical issues to serious mechanical breakdowns.

Biggest bargain?
Paul: Our five-furrow Kverneland plough has to be up there. I paid £4,000 for it a few years ago from Russells and when I got it home, I noticed something wasn’t right.

Eventually, we worked out the previous owner had turned the headstock upside down in order to get more lift.

So instead of the plough rotating with the land wheel kissing the ground, as we pulled the spool the plough turned over with the furrows facing the floor. It was a complete nightmare, but we quickly put it right and it works fine now.

If you’ve enjoyed getting the lowdown on Paul and Steven Houlston’s operation and fancy showing us your fleet, then get in touch. Email oliver.mark@markallengroup.com or contact FW via Twitter or Facebook.