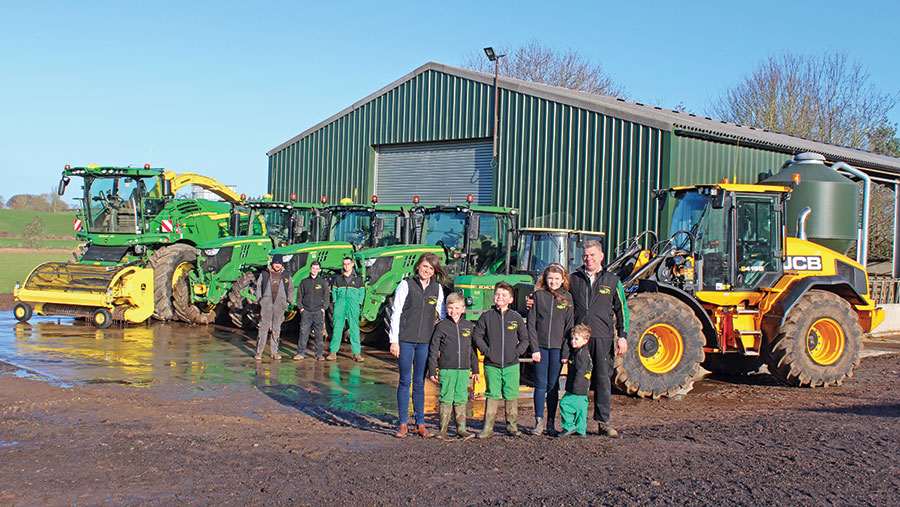 Our What’s in Your Shed? series susses out the machinery highs and lows of Shropshire contractors James and Victoria Seaton.

We used to be involved with the family dairy farm, but we decided to go our separate ways about 10 years ago. James then worked part-time for Wilson Farming while we tried to get our own contracting business off the ground.

Harry, Keith and Ian Wilson were a huge help during that period, and we hired machines from them until we were able to justify getting our own – we still hire a tedder and rake from them now.

In 2018, we also became the UK distributor for Belair, selling zero grazers, straw bedders and feeders.

Victoria’s parents, Phillip and Susan Jones, farm near Chester and they have been a great support to us in many different ways.

We have always had John Deere tractors on the family farm and we’re still running them now. That’s partly because it builds good-quality equipment, but it’s also down they fact we know the kit will have a decent resale value when it’s time to move them on.

Added to that, we have two very dependable dealers on our doorstep, so we know we’ll be well looked after.

We did have a Valtra on demo last year, but thought the transmission settings were overcomplicated and we struggled to get on with it. 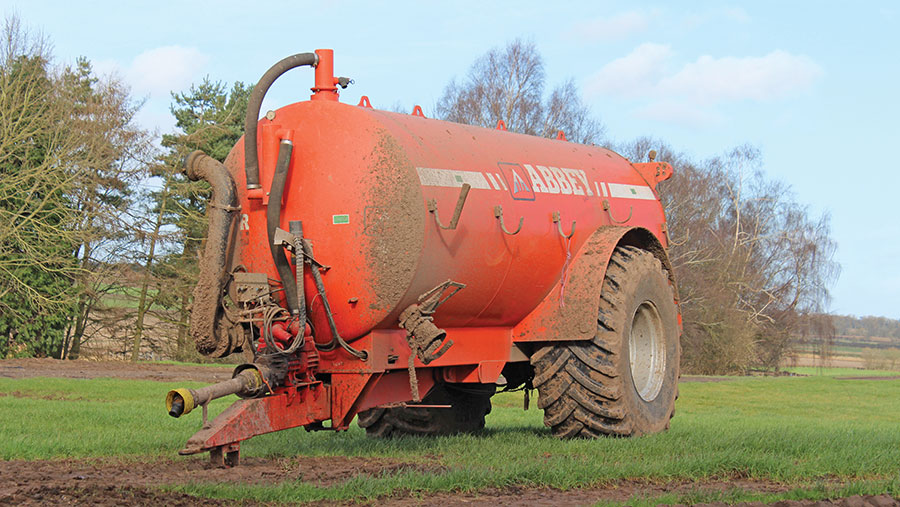 Our two nearest John Deere dealers – Rea Valley Tractors in Shrewsbury, and Cornthwaite Agricultural in Nantwich – both offer a great service and it’s hard to pick between them.

That would have to be one of our John Deere 6155Rs, particularly the one that is fitted with a loader.

New tractors are now so expensive, but these manage to strike a decent balance between power and cost of ownership. They can be used for a huge range of jobs, are handy around the yard and we can actually see a way of making money out of them.

Conversely, our 6195R costs a lot more to run an hour and we can’t justify using it for jobs that don’t command a decent hourly rate. It als doesn’t seem quite powerful enough for its price, so next time, I think we’ll have to go for a 6215R and a set of triple mowers to make the figures stack up. Or try a Krone Big M.

There aren’t any machines we hate, but the build quality of our Roto Grind Straw Mill has been disappointing. 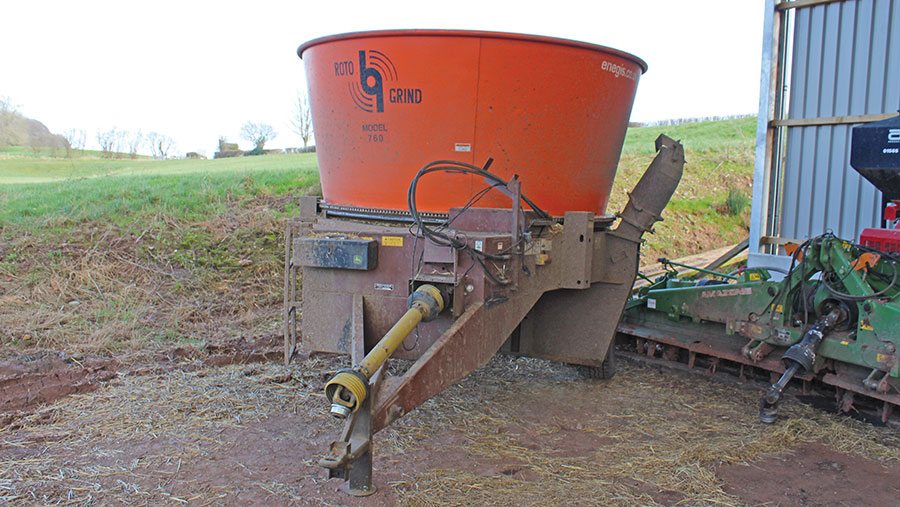 We have done a lot of work with it, but it’s only 12 months old and is already pretty worn. We would like to replace it with a Haybuster, but they’re a lot more expensive.

We have just bought an eight-row Vaderstad Tempo precision seeder to replace our Gaspardo maize drill.

It was purchased off the back of a demo we had a few years ago and we were seriously impressed with the accuracy of the seed placement, even at high speeds.

We also like the individual electric meter drives, which means we can have accurate auto shut-off on the headlands.

They are expensive, but we picked this one up as an ex-demonstration model for £58,000, which was a decent saving on the new price. It also came with beet discs, so we can use it for fodder beet.

We have 890ha to drill with it this spring and we’ll be running it on our 6155R Autopowr, which should be ideal for the job.

That’s our John Deere 2040 SGII X-E, which is really a bit of a toy. However, it does get used for jobs such as rolling that don’t require too much power.

It was bought from a farm near Chester and it’s in great working condition, with 8,000 hours on the clock. It’s really for our son Mason when he gets older – we would like to get a classic for each of the kids.

One will probably be a 3650, and we already have an old 2040 from the farm that needs a complete renovation.

Tractors tend to be kept until they’re on 4,000-4,500 hours, but as we don’t pay for the additional warranty, we are not concerned about shifting them on at a certain point.

Instead, we see what the deals are looking like each year and swap them if it makes financial sense.

Thankfully, our dealers have stood by us when we have had problems outside the warranty and they haven’t cost us a fortune.

Implements are changed when they’re worn out or we can justify upgrading. 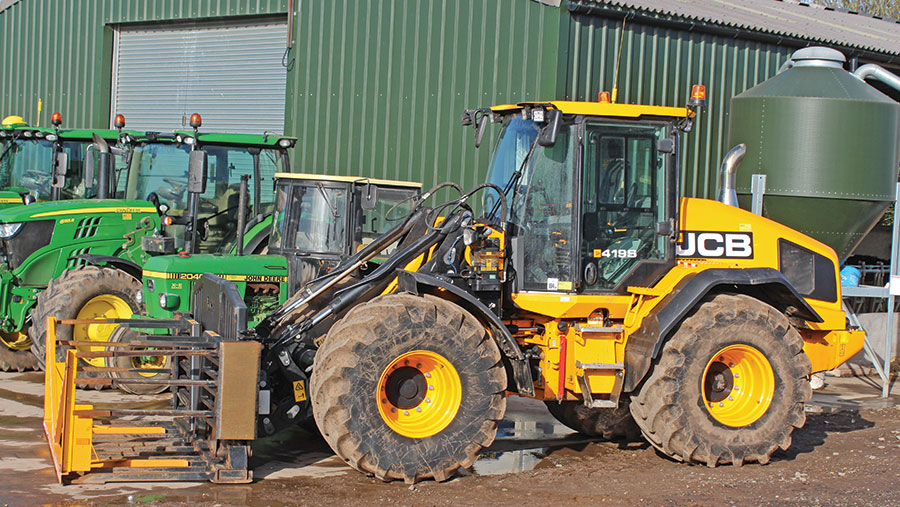 We would really like to swap our John Deere 8600 forager for a 9700. The smaller machine has been great, but the extra power from the Liebherr V12 will allow us to cover a lot more ground.

A Krone Big M could also be on the cards. The fact that high-horsepower tractors are so expensive means it could be more cost-effective than running a set of triples.

James: Once, when I was rowing up for Wilsons, I got three fields ahead of the chopper and decided to pull up for a short nap while they caught up a bit.

I fell straight into a deep sleep and the next thing I knew, the whole gang was charging up the steps of the tractor screaming at the top of their lungs – I thought my heart was going to leap out of my chest.

I still get ribbed about it now.

It’s simple, but we had some roll-up vinyl covers made for the back of the tractors that stretch from the cab to the top of the link arms.

They deflect grass, straw and dust away from the back of the tractor and keep it so much cleaner. It means we don’t have to pull hands full of debris out of the way before we can get to a spool valve. 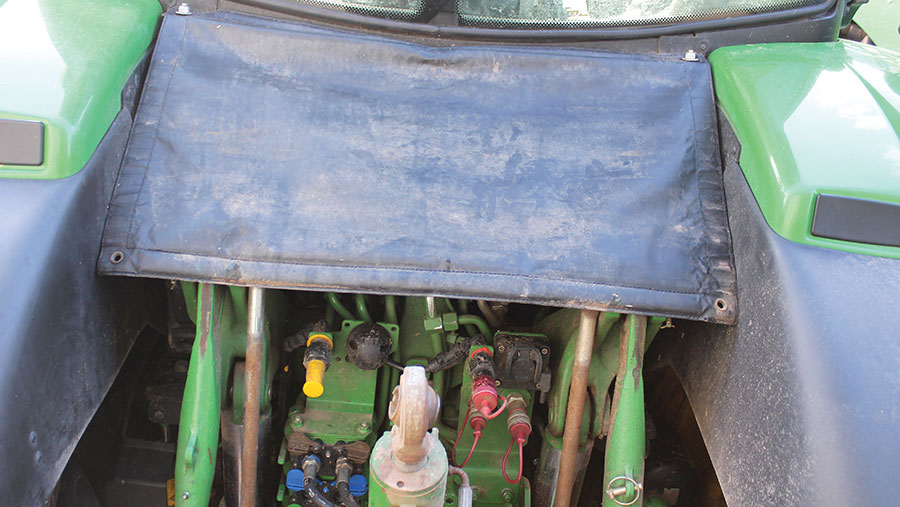 The next step is to get a retracting version, a bit like the one on the front of the forager.

The one thing we are struggling to live without is a press. We’ve got our eye on a 50t model, but it’s an expensive thing to buy.

James: Driving the forager is my favourite and unblocking our Vredo direct drill is my least. In sticky conditions, the discs clog up tight, stop turning and it’s a horrible messy job to free them up.

We actually run it with a hydraulic top link now, so we can raise the front and skim over the worst bits.

It’s an ex-council 2010 Ford Ranger with a 2.5-litre engine. It’s a pretty basic model, but has a 3t towing capacity and works well as a farm workhorse.

Best and worst tractors you’ve had?

Our last John Deere 6155R is probably the best and it clocked up just over 5,000 hours without being touched. The current one fitted with a 663R loader is giving it a run for its money, though.

The worst is a 1991 Massey Ferguson 390 that we used to have on the dairy farm. It was a real Friday afternoon tractor and was constantly going wrong.

In 2018, James and Victoria Seaton were appointed as UK distributor for Belair zero grazers, straw bedders and feeders, which they now sell through their business, JVS Machinery.

The venture started when Mr Seaton was booked in to visit the Sima show in Paris and his dairy-farming neighbour, Jim O’Neil, tasked him with buying a good-quality zero grazer.

After settling on a Belair Premium XL, Mr Seaton was approached by the firm to see if he would be interested in distributing the products in the UK. He took them up on the offer and the machinery dealing side of the business was born.