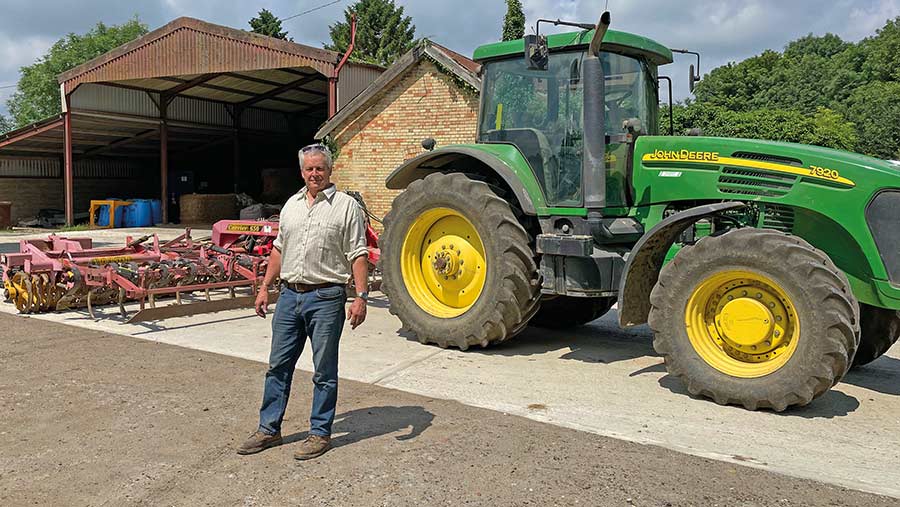 What’s in Your Shed heads to Suffolk to take a look at David Wreathall’s machinery fleet and his collection of modified soil-moving kit.

What cultivation equipment do you use?

I’m not a fan of new pieces of kit that are designed to do an OK job in all soils. Instead, I prefer to buy cheap second-hand machines and modify them so that they perform well on our soils.

As they don’t cost much, I can also justify having several different options to suit the conditions in a particular season.

Most of it has been modified by agricultural engineer Jim Tarry of JTS Machinery, who has a workshop on the farm and specialises in cultivation kit.

He built my primary cultivator, which started out as a 3m McConnel Shakaerator and was fitted with a set of Simba Cultipress tines and a twin row of 660mm Gregoire Besson-style ridged discs.

This does a great job of opening the ground when it’s tight.

If the ground doesn’t need loosening at depth, I use a 6m set of Massey Ferguson pigtail tines with spring tines at the rear.

These work up a decent amount of soil without bringing more clods to the surface for us to break down. They’re also handy for levelling ploughed ground.

Depending on the conditions, the primary cultivators are followed by a Simba Cultipress or a Vaderstad Carrier 650, both of which have been modified.

The Cultipress now has a set of hydraulic levelling boards on the front, which has transformed it.

They bash clods and take out all the lumps and bumps, giving a fine, even finish – it comes into its own in a dry year.

The Carrier also has levelling boards on the front, and the second set of paddles have had a length of flat steel welded across to make them more aggressive.

It started out life with system discs, but we changed it to tines which work much better on our soil.

I’ve been very loyal to John Deere over the years as I like the machines and they’ve always been reliable.

The first tractor was a 2130 two-wheel-drive that we got in the 1970s from the local dealer at the time, Blyth and Pawsey.

It was a great machine and we moved away from Ford as a result.

The only non-green tractors we’ve had since were a Massey Ferguson 2640 and 2725, which were solid and robust. However, they weren’t very comfortable to drive and had a few niggly problems. 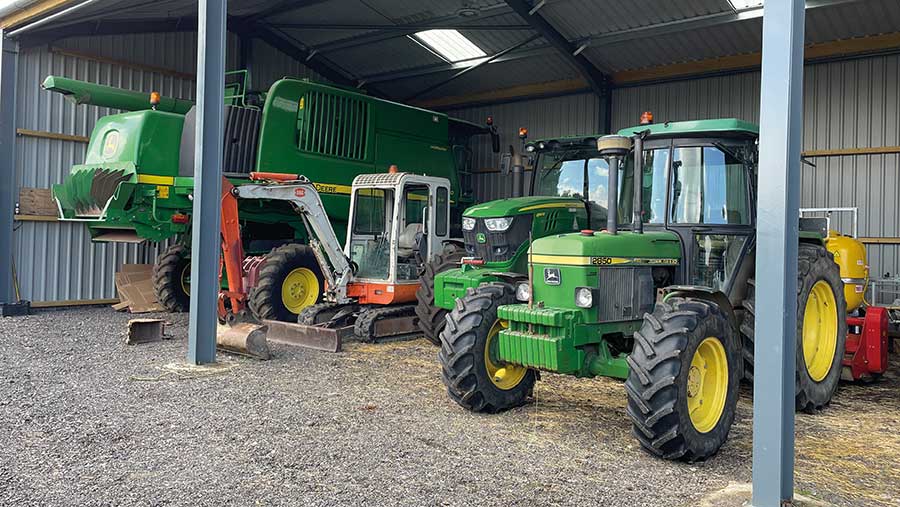 I don’t buy much new equipment, but I get parts and the odd used machine from Ben Burgess, Thurlow Nunn Standen, Brocks and Agri-Linc.

The engine was lovely, it pulled hard and it didn’t give any trouble, apart from the injectors.

The only downside was the bumpy ride on the road, which we used to calm down by dropping the tyre pressures. We sold it in 2005 when it was on 4,000 hours and replaced it with the 7920, which I bought new.

It had to have the Autopowr transmission pump changed, though, which set me back more than £5,000.

I’m lucky that I’ve never had a really bad one. The Massey 2640 and 2725 were probably the most troublesome, but they were minor problems that didn’t stop us for long.

From a driver’s point of view, the County 1124 we used to have with a Lambourn cab was by far the most unpleasant to drive. It used to rattle your head off and the turning circle was appalling.

The John Deere T550 Hillmaster combine, as it’s such a nice relaxing machine to drive.

Deere really knows how to make a comfortable cab – it’s quiet, is fitted with excellent climate control, and it has autosteer guidance that means I don’t even have to concentrate on driving straight.

It also produces an excellent sample, and as it’s a walker machine it keeps the straw in good condition, which is important as we bale most of it.

A few people ribbed me for getting a Hillmaster in Suffolk, but even though I’m not in a particularly hilly area, there are some slopes on the farm that max out its articulation.

Drilling is my favourite, and I’ve often said I’d do it for free if I had to. Cleaning out the grain bins is the worst and always requires a concerted effort to make a start.

I don’t have any set plans for changing machinery, but I do tend to move it on before it gets to high hour counts. That said, I don’t do many hours in a year, so the tractors I’ve got now will probably see me out.

Most of my machinery is second-hand and the last time I bought a new tractor was the 7920 in 2005.

The newest tractor I have is a 6150R that I bought second-hand from Ben Burgess. I wasn’t in the market at the time, but it was lovely tractor – one of the last before AdBlue came in – and the deal seemed good.

I enjoy driving it, but I’m wary of the fact that it’s got so many electronics. 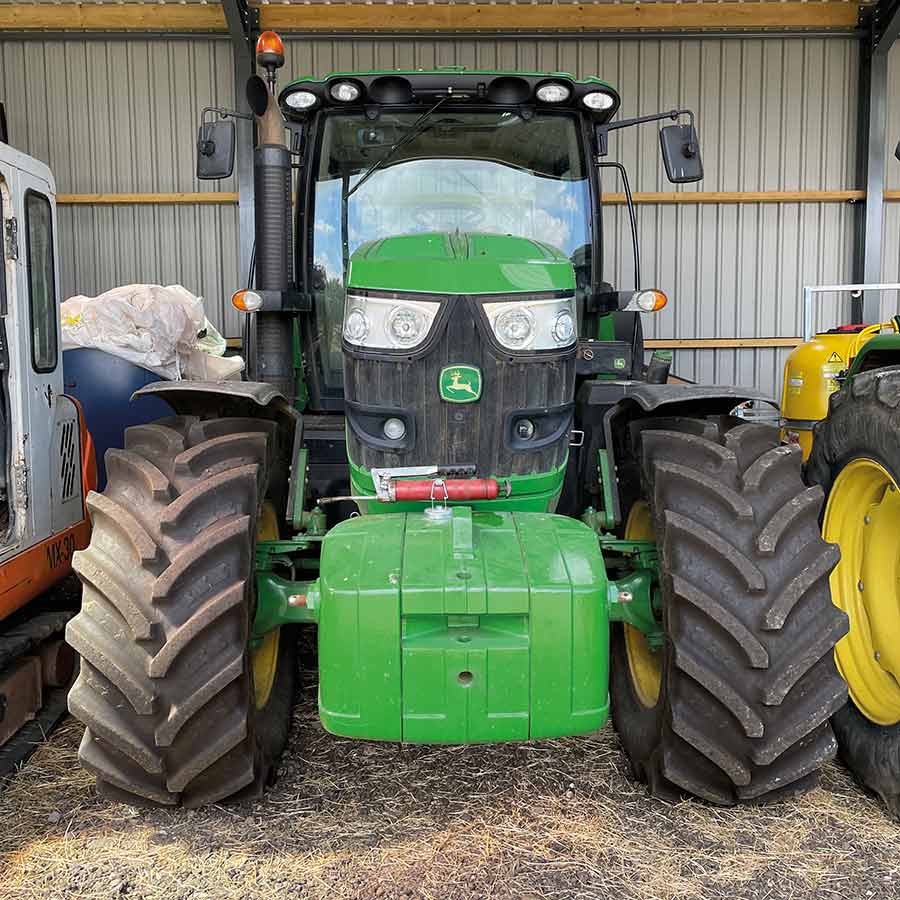 The 6m Massey Ferguson pigtail cultivator that we’ve modified by adding a set of spring tines on the rear.

However, the oldest machine with an engine is a 2001 JCB Loadall 530-70 that I bought to replace one that burnt out after a hydraulic pipe burst and sprayed hot oil onto the exhaust.

It’s done 5,800 hours and, other than the odd electrical problem, it’s gone well.

The Vaderstad Carrier 650 is my most recent machine, and I bought that about two years ago. It was a very worn system disc model and Jim Tarry at JTS Machinery helped me convert it to tines, replace the worn rings and add some levelling boards. 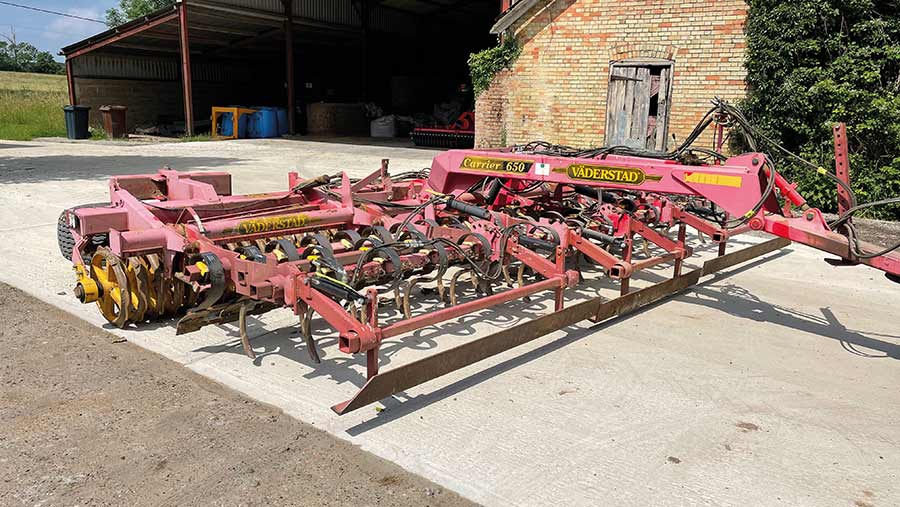 I don’t rate the disc models, but this version has become my most versatile secondary cultivator.

It will create a decent seed-bed in most conditions and as it’s more than 6m wide we can cover the ground in no time.

It gets pulled by the 7920 and we run it at about 8kph; any faster than that and it throws the soil around too much.

I’ve got a couple of drills in the pipeline. The first is a bean drill that’s going to be based on an old prototype frame I picked up.

This will have a hopper and metering system mounted on the top and a set of C-tine coulters with home-made seeding boots.

For the second, I’m looking to mount a small seed applicator on the top of my 3m Kuhn power-harrow, which will be used for establishing wild bird seed mixes into a decent seed-bed.

It should complement the modified He-Va disc roller that I’ve got for direct seeding cover crops such as mustard directly into stubbles.

I bought my first pillar drill a little while ago and I don’t know how I managed without one. It’s a fairly simple Truecraft model from Spaldings, but it is accurate and far quicker than drilling by hand.

It really came into its own when we made a following harrow for the Triple K cultivator and needed to drill a series of holes for bolting on the tines.

I was hedgecutting on a wet day with the windows misted up and I whacked the boom into an oak tree.

There was enough force to bring a big branch down, which smashed the tractor roof and mudguard and broke the cooling fan on the trimmer.

The hedgecutter incident was the biggest bill at £8,000, but that was covered by insurance. After that, it would probably be the Autopowr transmission pump on the 7920.

A bolt-on combine auger chute that means we can unload on the move without having to drive on the straw. We used to have a long sock on the end, but it didn’t throw the grain quite far enough.

It’s made from relatively thin sheet steel so that it doesn’t add too much weight and put extra strain on the auger.

It’s a tidy 2006 model and has been an excellent tractor – it won’t be leaving the farm anytime soon. 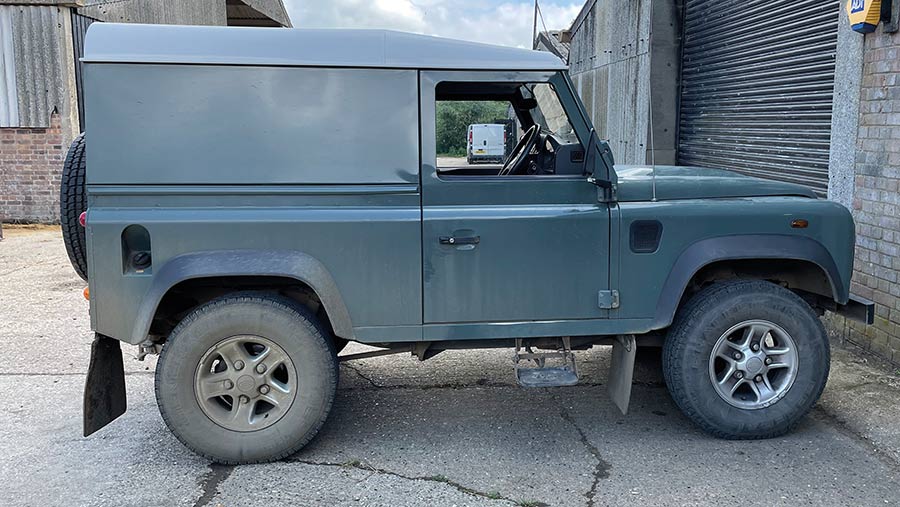