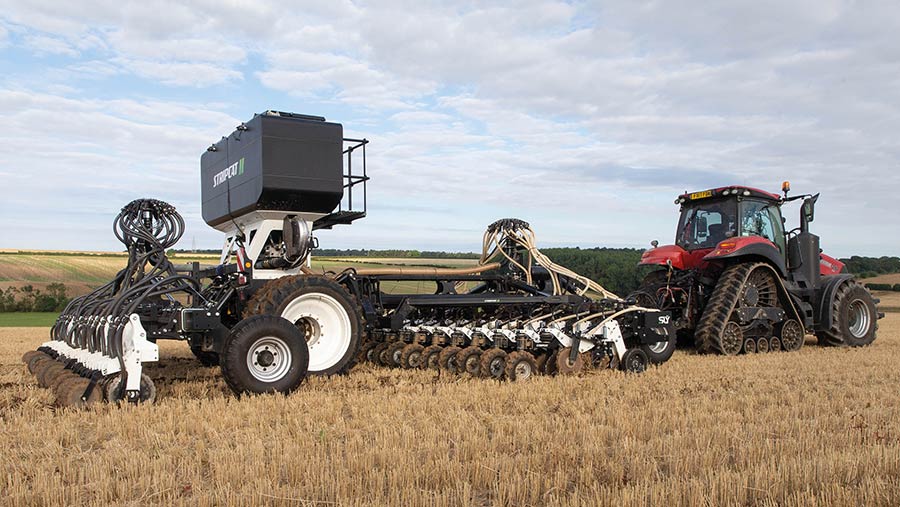 In their quest to improve soil health and better adapt to changeable conditions, Lincolnshire growers Matthew and Richard Fisher have invested in an elaborate custom-built strip-till drill.

The impressive rig is based on a 7.5m Stripcat II cultivator, supplied by Sly Agri UK (now trading as Horizon Agriculture), and it has undergone a series of modifications that allow it to be used in different ways.

In its simplest setup, it operates as a strip-till cultivator, working up bands of soil across the field, which can be left to weather and dry out before drilling.

Replacing the ripping leg with a 5in (12.7cm) Dutch Industries coulter then allows the same cultivation units to run back through the field, establishing a crop.

However, there’s also a rear coulter bar fitted with pairs of Vaderstad discs, which give a couple of additional seeding options.

These can be set to plant either side of the row placed by the Dutch coulters, creating a wider band of the same seed, or they can be used to establish a companion crop between the rows.

Dropping one of the discs off and adding some spacers also means the single remaining disc coulter can plant a crop behind the cultivation units, creating a true single-pass machine – ideal for oilseed rape.

A front-mounted liquid fertiliser tank gives the added benefit of being able to pipe nutrients to the back of the cultivation legs or seeding coulters as the Fishers see fit.

The farm is operating a partial controlled traffic farming (CTF) system, so the 7.5m drill neatly sets up the system for the 30m Sands Vision self-propelled sprayer and 7.5m-cut Case-IH Axial Flow combine. 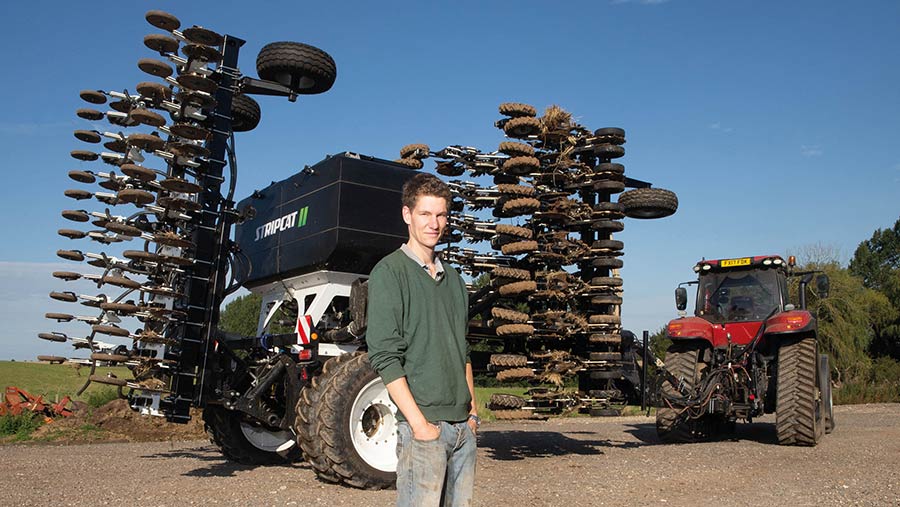 The reason for choosing such a complex machine is that the pair didn’t want to adopt a plan that left them with no room to manoeuvre.

“We like the idea of zero-till, but we had to accept that our soils weren’t in good enough condition to jump straight into that system,” says Matthew Fisher.

“Strip-till gets us halfway there, and the Stripcat gives us a lot of different options to play around with as we learn what works and what doesn’t.”

Prior to the Stripcat, the 400ha arable enterprise was already on a long-term path to improving soil health. Matthew’s grandfather was an early proponent of moving away from the plough, and since then the farm’s tillage regime has continued to be paired back.

The plough was used occasionally, for spring cropping, second wheats and rotational blackgrass control, until 2015 when they switched to using a Sumo DTS drill.

This drill brought in a more minimalist cultivation regime and got the Fishers used to the idea of establishing cereal crops at wide row spacings. Its Dutch Industries coulters placed the seed in rows spaced 33.3cm apart and yields were comparable with crops established by the Vaderstad Rapid they had run previously.

The wide row spacing concept has been pushed a good bit further with the Stripcat, which has 15 strip-till units that sit on 50cm centres – giving it a total width of 7.5m.

Each unit cultivates a strip up to 25cm wide and, using the front and rear coulters simultaneously, it’s possible to plant this entire band with a cereal crop. The Dutch Industries coulters are 5in (12.7cm) wide, but they establish a 6in (15cm) band of seed – when teamed with the Vaderstad discs, this gives a continuous 25cm strip of seed.

That leaves 25cm uncultivated strips between, which can either be fallowed or planted with something else.

Alternatively, the Dutch Industries coulter can establish a band of cereal seed in the centre of the cultivated rows and the rear coulter bar can place lines of companion crop either side of it.

How it’s put together

The whole outfit is mounted on a large, trailed folding frame that sits on dual wheels, spaced so that they straddle the rows.

At the front of this sits a toolbar that’s home to the Stripcat row units. Each of these is mounted on a parallel linkage so that they independently follow contours and give an even seeding depth in differing soil types.

Each assembly has a leading wavy disc, which opens the ground and slices through trash, before a set of floating row-cleaning discs pushes it out of the way to leave a clear strip.

A cultivating leg then lifts and works the ground, to depths of between 3in (8cm) and (11in) 28cm, before ridge-building discs at its flanks form a berm of friable soil. Finally, a set of cleated press wheels consolidate the seed-bed. 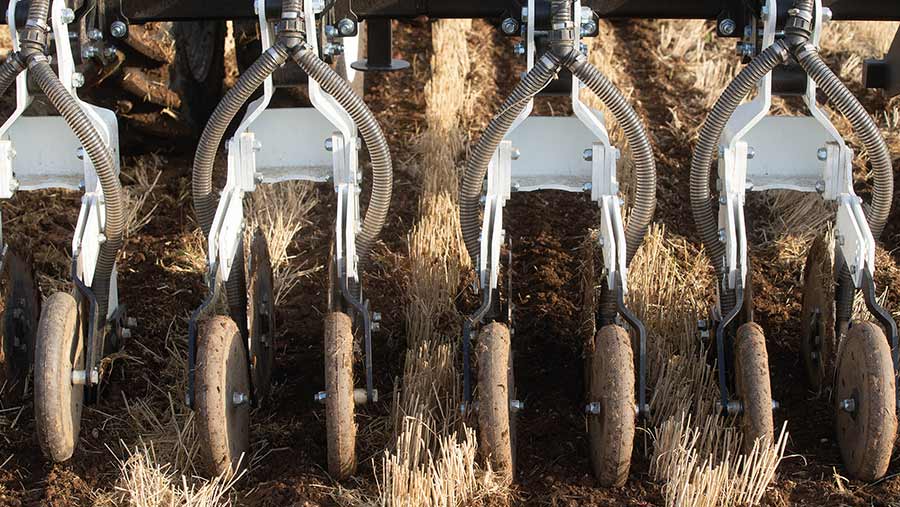 Each cultivating leg is also fitted with an optional hydraulic auto-reset system attached to its own accumulator.

Several leg options are available, but the Fisher’s machine is fitted with low-draft points featuring 5in (12.7cm) wings. Horizon Agriculture has also paired these with liquid fertiliser tubes, which gives the option of laying down nutrients and biological pest control products while cultivating.

Switching to seeding mode involves dropping off the cultivator points, replacing them with Dutch Industries coulters and attaching the seed tubes. These coulters also have liquid fertiliser pipes.

To maintain consistent cultivation and seeding depth, the strip-till units are mounted on a parallel linkage and have a clever, pneumatic down-pressure system with a pair of air bags.

These allow the pressure of the whole assembly and the rear packer units to be adjusted independently. Air for the system is supplied by the drill’s own 12V compressor, which is mounted on the drawbar. 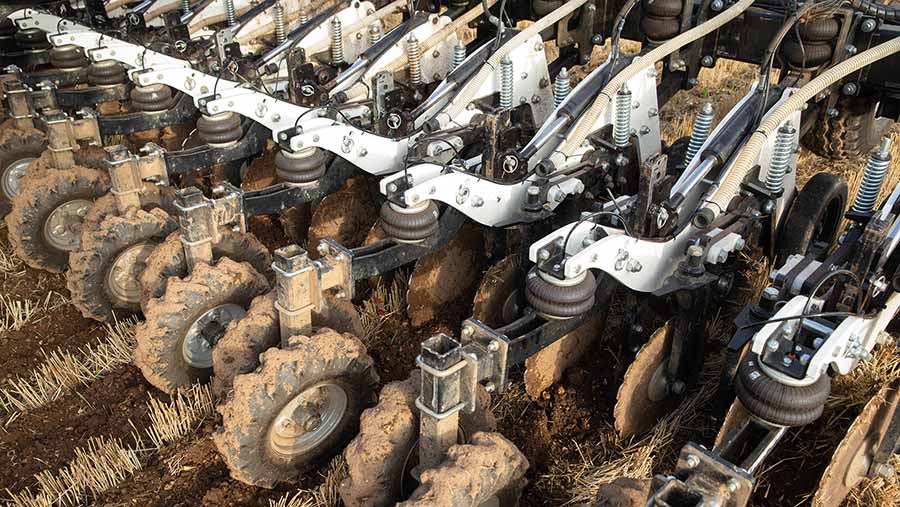 The axle and dual wheels sit at the rear of the main assembly, with the twin 2,000-litre seed tanks mounted above.

Each of these has its own metering system and the configuration of the pipework means that seeds from either tank can be sent to the front or rear coulter bars. These are controlled by an RDS Artemis screen in the cab, which communicates with a Topcon ground-speed radar.

The additional rear coulter bar hangs off a three-point linkage mounted behind the wheels, and this setup means it’s simple to put on and take off.

Like the primary drilling assemblies, these have 15 seeding units – each with a pair of Vaderstad disc coulters – which are mounted on a parallel linkage with another air bag. Closing wheels are positioned behind each disc to finish the job off.

As for the liquid fertiliser system, this has twin 900-litre stainless steel tanks, which were fitted out with pumps and pipework by Horizon Agriculture.

The tanks are mounted on the tractor’s front linkage and the product is distributed to the relevant drill coulters via a manifold mounted at the front of the drill. This is operated by Horizon’s wireless Bluetooth system, which uses a standard Samsung tablet rather than an expensive control box. 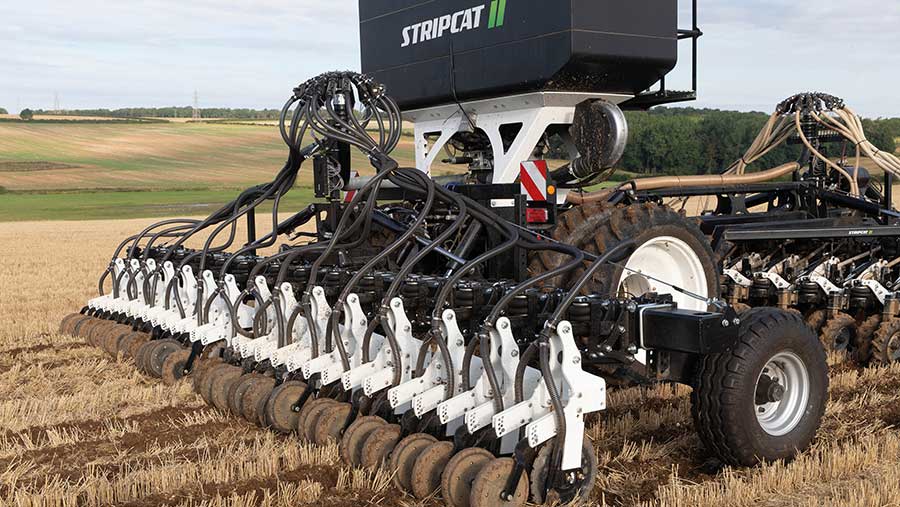 The drill arrived on the farm in August 2019 and the plan was to use it for establishing autumn cereal crops. However, the appalling weather meant almost all cropping was delayed until spring.

At the time of writing, most of the spring barley and oats established by the drill had yet to be harvested, but early indications were that the system was giving comparable yields to the Sumo regime.

The machine in charge of pulling the outfit is a 310hp Case-IH Magnum Rowtrac, which is running RTK guidance. According to Mr Fisher, this has more than enough power for the job and it can easily reach the top recommended working speed of 10kph at 4-6in deep.

An abundance of hydraulic functions means all four of the tractor’s rear spools are in play, plus a number of diverter valves. These are used for services which are not engaged while in work, such as the seeding fan paired with a fold ram.

Because it’s such a big machine to handle – sitting at about 9m long – Mr Fisher has installed a rear camera to help manoeuvre it safely. Each seed tank also has a camera so that grain flow can be monitored.

The Fisher’s strip-till system gives the option of experimenting with a wide range of companion crops planted in the inter-row.

These could include nitrogen-fixing plants that benefit the next cash crops, or companion planting that may reduce pest and weed burden. “For example, we could put a legume into a stem-extended first wheat and this would fix nitrogen for the following year’s crop,” says Matthew Fisher.

The Stripcat II cultivator is now sold by Sly France – part of Agrisem – and Horizon Agriculture is developing its own strip-till cultivator.

This will work in a similar fashion to the Stripcat and will have the option of being used to establish cereal and oilseed crops, as well as sugar beet and maize with the addition of US-built Precision Planting row units.