In the latest from our series that takes a peek behind the doors of the nation’s machinery sheds we visit Herefordshire contractors WE Price, which offers a range of services including forage harvesting, combining and spraying.

The company started in 1966 with a Nuffield 1060, plough and baler, but has expanded over the years and now runs seven tractors along with a fleet of cultivations and grass machinery.

Our dad, Willy, started back in 1966 with a Nuffield 1060, a plough and a baler. He gradually grew the business and we both joined him after we left college.

We are still a fairly small team consisting of the two of us, Jason Merriman and Dom Finlay. Dad is still very active and we have a few casual workers at busy times, too. 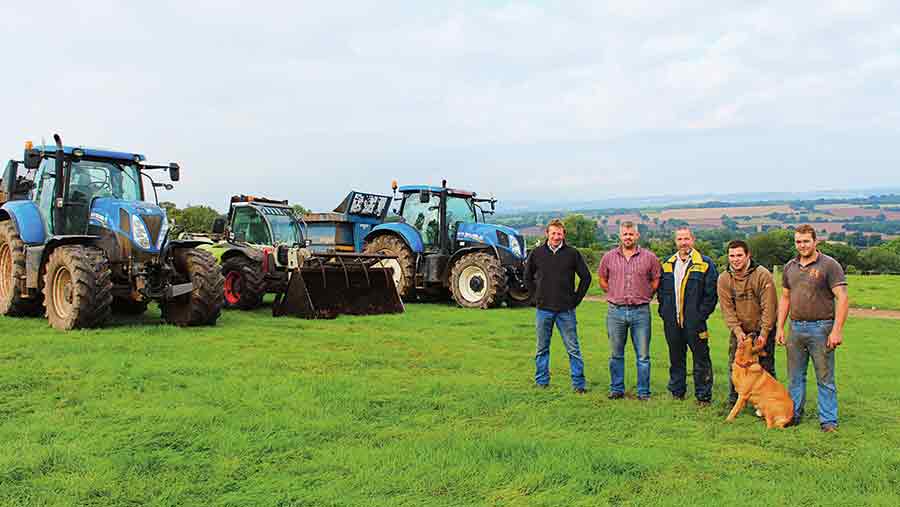 On the tractor front we have been pretty loyal to New Holland over the years.

The only other brand we have dabbled with is Case, as we were really impressed with the MX range that came out in the mid 1990s.

We had two MX135s and an MX150, all of which were great tractors. We still have an MXM130 that we got a bit later, which has also been fantastic.

We have also stuck with John Deere combines and we’ve been pleased with the output of our two CTS machines. They run rings around our WTS walker version and the straw quality is similar.

All our Claas kit comes from Morris Corfield. It is a fantastic firm to deal with – nothing is ever too much trouble.

We just bought a Househam Air Ride 3000  to replace our old Sprint and the difference is amazing. One of the most noticeable things is the quality of the ride, which is so much smoother.

The 230hp Iveco engine also has a good bit more power and purrs up the banks.

The rate controller is really accurate, too, and we are planning to fit auto-section control to improve it further. Upping our tank capacity from 2,000 litres to 3,000 litres also means we can cover quite a bit more ground in a day.

It’s a 2009 model on 4,500 hours and we bought it from a local spraying contractor who had looked after it really well.

The old Amazone 4m combination drill we had before the Lemken Solitair. The drill itself wasn’t too bad, but the power harrow’s gearbox broke up and we had to replace several bearings in the bed too.

As it was a rigid drill, we also got pretty fed up with having to keep taking it off whenever we went down the road.

All of our round bale wrapping is done with a 20-year-old Kverneland 7517 that has done tens of thousands of bales.

We bought it six years ago for £1,200 to do a bit of work on our own farm and it’s ended up doing everything. 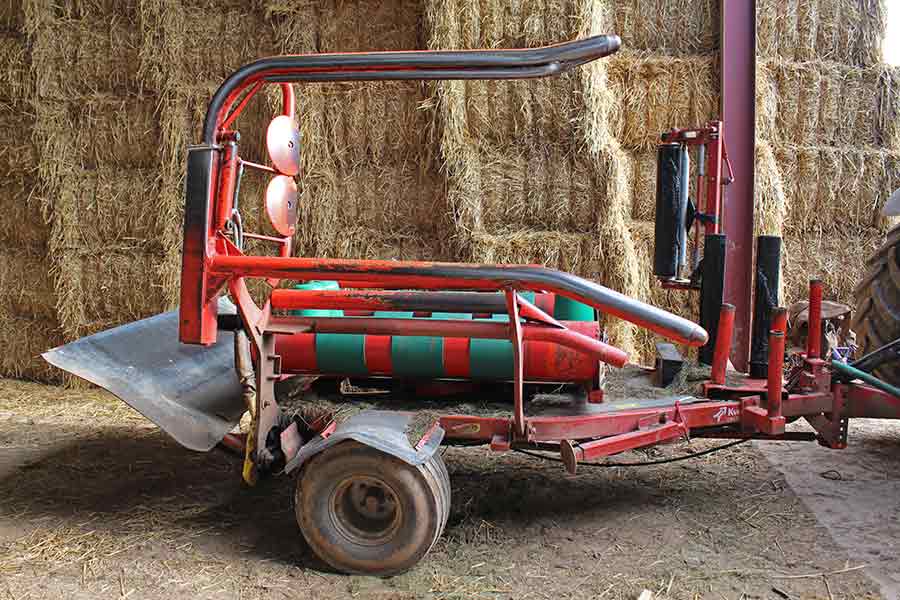 The beauty of it is that it’s so simple and easy to repair. The hydraulic motor went just after we had it and we have replaced the ring gears, but it hasn’t given any other trouble.

Tractors are roughly on a five-year replacement policy. We always like to have three or four frontline tractors on less than 5,000 hours, but the others will usually go a bit higher as they are clocking up about 1,200 hours/year. 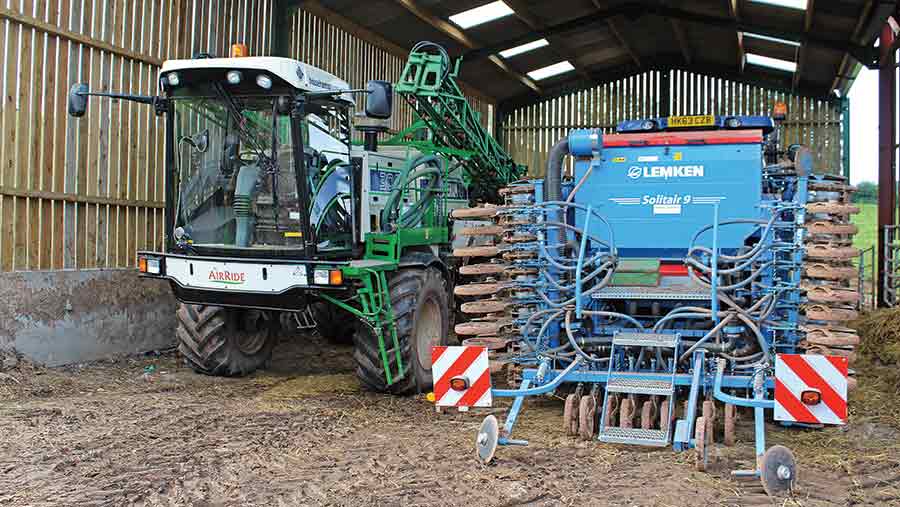 We always buy second-hand or ex-demonstrator tractors with about 1,000 hours on the clock, as they have already depreciated quite a bit.

Combines and a lot of the grass kit is on a three-year replacement policy. We always buy grass equipment new, but we usually look for tidy combines with about 1,000 hours on the clock.

We quite fancy a second-hand Simba Solo or Vaderstad Topdown, as we would like something that works the ground a bit more than the Discaerator. You can pick them up for about £15,000 at the moment, which we don’t think is bad value.

A 3m version would also be fairly well matched to the T7.270, particularly if you flick the pto into gear to engage boost – not the done thing, but it works.

If we had some spare cash it would also be nice to get a matching fleet of trailers.

The first time we went drilling with our Amazone 3m combination we didn’t set the spring tension on the metering wheel correctly. As a result it kept bouncing in and out of work, creating a lovely chequerboard pattern across the field.

Luckily they were only small patches and as the crop tillered out they filled in fairly well.

That would be the £8,000 bill we had for putting a new transmission in the Claas Scorpion. Thankfully we didn’t end up paying the full price. 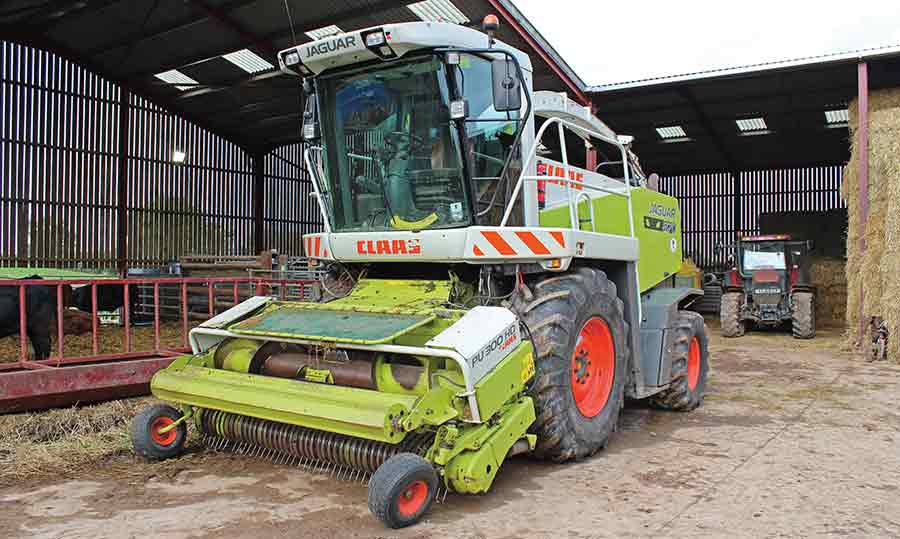 We’re not big inventors, but we do a lot of repairs and modifications to our machinery.

The welder and the hammer.

Do you ever buy new?

Most implements that get a hard life we’ll buy new. That includes mowers, tedders, rakes, power harrows and muck spreaders.

Andrew: Drilling is the most satisfying job for me and I particularly hate the job of cutting string off the muckspreader rotors.

Steve: Probably spraying followed by combining with one of the CTSs. Hedgecutting is my least favourite.

Best tractor you’ve every had?

That has to be the Case MXM130. It is a 2003 model and in its early days it was the main drilling tractor. Now it has clocked up more than 12,000 hours and has been semi-retired to wrapping duties and other odd jobs. It has been a real gem and hasn’t given a jot of trouble. 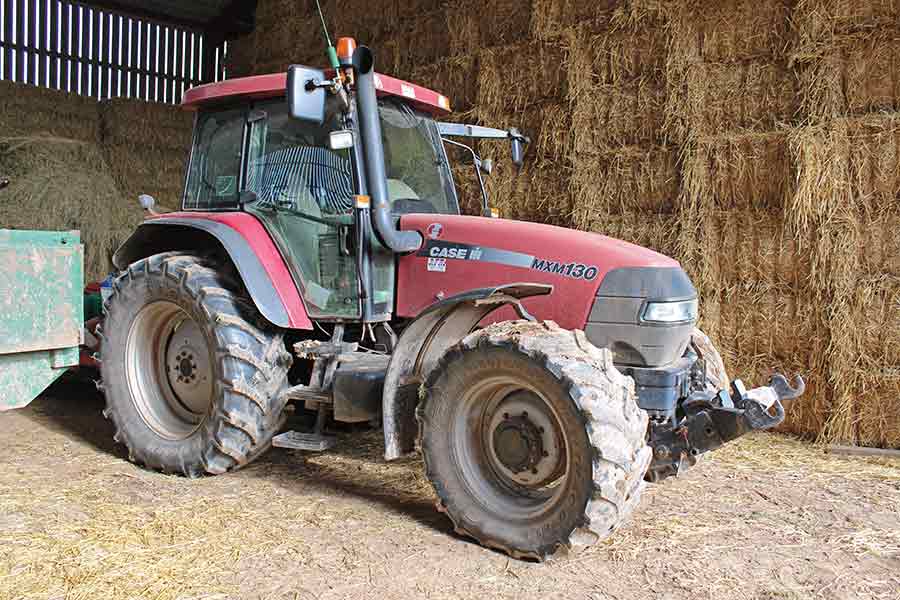 We had a Case/Steyr CS150 that was a complete pig. The main problem was that the half shafts used to snap like carrots and would barely last 400 hours.

It had only done 900 hours when we bought it, but we moved it on after it had been with us for less than a year.

We have had some pretty good deals, but I’m not sure we would call them a bargain. One of the best was a 14t Henton trailer that we bought for £4,000 about 10 years ago.

It has been great, is still really tidy and we would probably get our money back if we sold it.

Tractors with large amounts of boost – they’re nowhere near as powerful as they look.

Any machinery toys or classics in the shed?

Unfortunately not. We have had some great ones over the years, but we have always traded them in for something newer. There are a couple we wish we had held on to.

Are you a What’s in Your Shed fan?

If you’re a regular reader of What’s In Your Shed?, why not get in touch and be featured yourself? For the series to work we rely on farmers and contractors coming forward and inviting us to look round their machinery sheds.

So if you have considered taking part, but haven’t got round to approaching us, please get in touch. And if you think your farm is too small, or your machinery is too old, think again – we want to visit farms of all shapes and sizes. It just needs to be a proper, working farm or contracting business.