For the latest instalment of our long-running and popular series, What’s in Your Shed, we head to south Wales to quiz Monmouthshire beef farmer Greg Willis. Find out what kit he loves, what is his least favourite and what is his oldest machine still at work.

Our yard is a bit like a rainbow, so you can tell we’re not really loyal to any one brand. For a long time we’ve had a Renault or two on the fleet as we used to have a couple of tidy dealers.

The first was Vernon Lane just down the road and then Harold R Johns, which still has the Claas franchise now. We’re also now on our second Fendt and we’ve had a couple of John Deeres in the past, too. 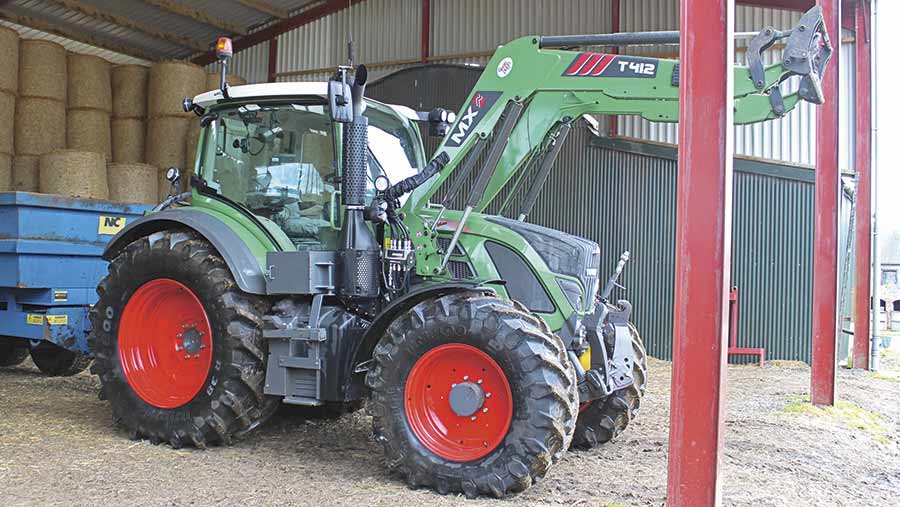 It’s got to be either our John Deere dealer Frank Sutton or Harold John. The great thing about Frank is that he’s open seven days a week without fail and he’ll even help out with other brands if you’re stuck.

Harold John is also good to deal with and we’ve had a couple of pieces of grass kit from there.

For me it’s got to be the Spread-a-bale as it makes my life so much easier day to day.

Years ago we used to use an old Teagle Tomahawk for bedding down, but it created so much dust and chopped up the straw so fine that we switched back to bedding down by hand, which was a complete pain.

We came across the Spread-a-bale around three years ago and initially thought it looked a lot of money for something pretty basic.

But it does the job really well, doesn’t chop up the straw and doesn’t make much dust. If it broke I’d buy another one tomorrow. 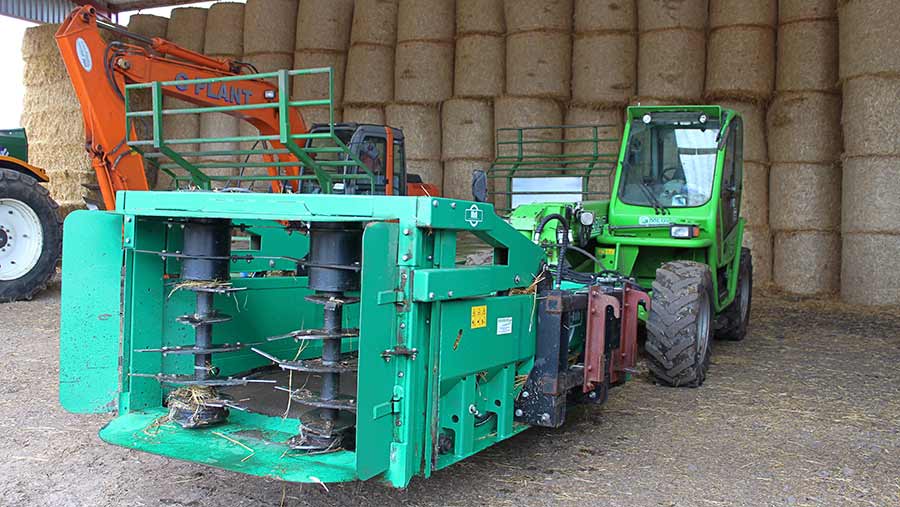 The Fendt 516 is also worth a mention. We bought it last year to replace our 415 and it has just clicked over the 600-hour mark.

For a four-cylinder tractor it hangs on amazingly well and pulls our five-furrow Vogel and Noot plough on 20in furrows with no problem at all.

The five-furrow Vogel and Noot plough. We bought it second-hand at a farm sale and it’s always got something wrong with it.

The pin that holds the plough to the headstock seems to snap like a carrot and we’re on our third one of those at the moment. We’ve had countless other bolts and pins snap and we’ve also had to weld up a crack on the bracket for the turn-over ram.

The Merlo 40.7 CS has been giving the plough a run for its money recently. I love driving the thing, but it’s had a series of electrical problems that have been a pain in the backside.

We’ve just bought a VDW silage clamp defacer to replace our old shear grab and we’ve been impressed with how much cleaner the face of the clamp is.

With the shear grab it could take a week to get across the face and by then you could start to see mould growing.

But with the defacer you only take a few inches off at a time so you can skim across it in a day, which helps it stay nice and fresh.

We’ve got a late-1950s three-cylinder Massey Ferguson 35 that’s been on the farm since before I was born.

It gets used every day on the scraper and starts on the button every time. It does seep plenty of oil and every time we fix one leak it springs another, but it never seems to give serious trouble.

We’ve also got some old Kverneland-branded Globus stone rakes from the 1980s, which get used a lot on our stony ground. When we go out with the rakes we offset them and make a windrow of stones that we then pick up with an elevator on the tractor.

We try to replace a tractor and telehandler every three to five years if we can. The rest just gets replaced when it starts to give trouble.

At the moment we’re looking for a new round baler and a telehandler. Currently, we’ve got a Welger 245 roller baler, but we find it struggles to bale dry, brittle straw. We’re hoping to replace it with a belt baler and we’re looking at either a Welger, McHale or Krone.

As the telehandler is on 5,000 hours and has had some electrical problems, that’s due to be replaced, too. I’m a fan of hydrostatic machines so I might try a Claas or one of the new JCBs with the hybrid transmission.

It was a long time ago, but I was pulling out of a field opposite our drive with a trailer load of stone on the back. It was a blind pull out so I was looking carefully in both directions and slowly inching out.

The next thing I knew the front wheel of the tractor was parked on the bonnet of an Isuzu. Luckily the driver was fine and there was no damage done to the tractor. The Isuzu’s repair bill was a pricey one though as I shunted the engine mounts out of place.

Last year we parked our Renault 640 and baler in a shed full of bales we’d just finished stacking and when we came back in the morning we couldn’t see the tractor for the pile of bales it was buried under.

Once we’d dragged them all off we realised that every single panel on the tractor had been damaged beyond repair. Somehow the baler escaped without a scratch.

Our dealer had to source a series of blank panels and paint them up the correct colour. The bill totted up to £15,000, almost writing off the tractor.

This is a very simple one, but it saves us loads of time when clamping silage. Instead of having loose tyres everywhere we bolt them together into a matt of six. We then haul these up on to the clamp with the telehander and two people can slot them quickly into place.

The Snap-on half-inch impact driver. It’s an amazing thing and is as good, if not better, than any air-powered version. 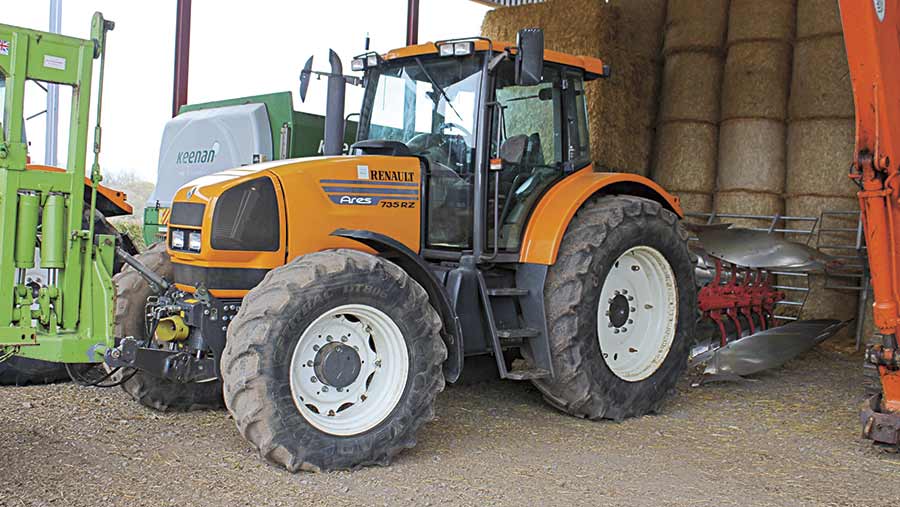 We do buy some second-hand kit and some buys have been better than others. The Vogel and Noot plough wasn’t one of the best ones, but we had a good experience with our Renault 735RZ.

It’s probably our John Deere 6310. We bought it new in 1998 and it hasn’t given us any trouble, other than a couple of batteries and an alternator. It’s now on 8,000 hours and drives the mixer wagon every day. It’s also the one I parked on the bonnet of that Isuzu.

We had a Renault 120.54 Nectra, which was a limited edition. It had a gearbox called Trackshift that was so shocking we nicknamed it Trackshit. To be fair to Renault it stood by us and helped with the repair cost, even though the tractor was out of warranty.

We’ve got a Simba Solo that we bought from a farmer in Nottinghamshire for £2,100. It’s a few years old, but is really tidy and had nearly new metal on it.

Just the MF 35 on the scraper, which is usually referred to as the Dirty Five.