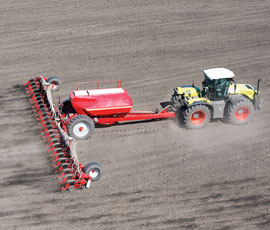 It may not prove to be a record-breaking year for wheat prices, yield or profitability, but machinery makers and users are doing their best to make 2012 a record year for records. First off, at the tail-end of 2011, we had Claas announcing the world record for the tonnage of grain harvested in one 8hr period (675t from 70ha in the UK).

Then combines4charity announced its bid to set a new record in July this year for the most combines cutting in one field (250-300 combines in a single field). And last month Claas and Horsch set a new world record in Russia by drilling 448.29ha of maize in 24 hours with a Horsch Maestro 24 SW drill and a Claas Xerion 5000 tractor.

So what records could be reasonably broken in 2012 (apart from the wettest spring)? Biggest number of bales made in a day would be good, or maybe another try for the biggest area of ploughing in a 24 hour period. That hasn’t been broken since a Case STX500 Quadtrac and 20-furrow Gregoire Besson plough managed 321ha (793 acres) in 24 hours in 2005.