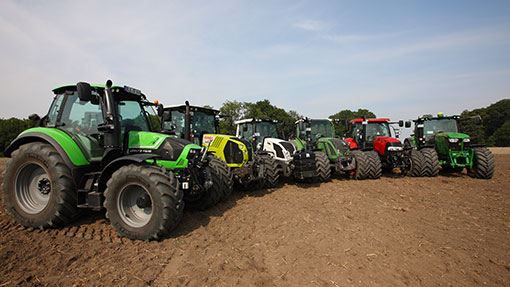 The appeal of a small frame and strong engine has seen most of the major tractor makers falling over to build the biggest four-cylinder tractor on the market. Oliver Mark and James Andrews joined colleagues from France, Holland and Germany to try out six of the latest contenders.

Click on the images below to see test results for each tractor:

Six models make up the Maxxum range, which is made at Case IH’s European home in St Valentin, Austria.

The series starts with the lesser-powered Maxxum 110 and tops out with the 140 model. Above that come the bigger-framed Pumas.

There are various transmission options including the 17Fx16R powershifter and the stepless CVX version.

The FPT engine was a star performer at the DLG testing station. Fuel consumption was consistently better than average at max power and during the six-point partial load test.

But the Case’s slightly pokey cab was less impressive. The main blister pad controls are good, but the monitor lacks integration, is too complicated and had fewer adjustments.

Our first German-based candidate is John Deere. The tractor-building magic happens at the Green Giant’s European headquarters in Mannheim.

The 6R first appeared in 2011 as a replacement for the 30-series. The range starts with the 105hp 6105R and includes the 6115R, 6125R and 6130R – the only four-pot to get Deere’s medium-sized chassis. Transmission options include semi-powershifters and CVTs.

The smallest six-cylinder is the 6140R, which uses the same lanky frame as our test four-cylinder.

The Deere’s cavernous cabin was simple to use and logically laid out. The side console is clear, but it lacks some of the fancier functions provided by test rivals.

Deere’s modest engine is bolted in the frame of a bigger six-cylinder tractor, which made it clumsier around the yard and hindered forward visibility.

The racy-looking 6-series is put together in Lauingen, northern Germany and the tractors had their first public run-out at the Sima show in Paris in February.

All 10 TTV tractors have Deutz-made motors under the bonnet, although these vary in size depending on the model.

There are more models in the line-up if you include the semi-powershifters, and they range in muscle from 118-193hp; the smallest six-pot comes in at 114hp.

Logically, the 5- and 7-series sandwich the 6-series.

There’s plenty for the Deutz designers to celebrate – the cab, monitor and ergonomics all scored well, and most people should be able to hop on and drive it pretty easily.

The problems came at the DLG, where the tractor underperformed in almost every test. Deutz reckons the software wasn’t set correctly, which led to some thirsty-looking fuel figures.

Arion tractors are assembled at the Claas tractor factory in Le Mans, France. The range was launched in the summer of 2012 and includes three four-cylinder models.

All the tractors use the same Deere powerplant and transmission options include the Hexashift and the Cmatic CVT.

The Claas cab was big, spacious and packed full of features. But the arrangement of programmable F-buttons packed on the mouse-style handstick and console can get complicated.

Power is provided by a boost-less Deere engine, which means emissions are dealt with by EGR and a filter, rather than an AdBlue-based system.

Assembled at Valtra’s factory in Suolahti, Finland, the N163 was launched at Lamma back in 2012.

The N-series includes 17 models with a host of different gearbox options. Power outputs start with the 99hp N93 and top out with the N163.

All the models in the N-Versu and N-Direct range use a four-pot, 4.9-litre engine from Agco Power.

If you’re after something that’s fieldwork biased then the most basic six-pot T-series comes with a HiTech transmission and has a 141hp engine.

If we were scoring the tractors solely on the DLG’s measurements then the Valtra would be a perennial tractor test top performer.

But the in-cab ergonomics have a habit of letting the Finn down. Sporadic control labelling and layout can prove difficult to fathom and the cab is generally low on quality.

Fendt’s Bavarian base is in Marktoberdorf in southern Germany, and it’s here that the CVT specialist builds its 2012-launched 500-series.

All the tractors use a 4.0-litre Deutz engine and six-pot equivalents start with the 145hp 714. Fendt’s one transmission policy means tractors are only available with a Vario CVT.

Fendt finished top of the pile again, with good all-round scores. The cab was well laid out and nicely finished, but it also impressed under the tinwork where the Deutz engine produced frugal results.

However, the Vario transmission had a habit of wasting a lot of the horsepower and it might be something to think about before you pay the premium price.

The layout and build quality was a major factor. There was nothing new here – John Deere and Fendt led the pack with car-like interior quality, while the Valtra scored badly for its old and generally drab office space. It, along with the Case, can also feel a tad tight with a passenger on the second seat, unless they happen to be pretty and blonde. At the other end of the scale, John Deere had the biggest cab by some margin.

It’s not all about size, though. Practicality is arguably more important, particularly given that plenty will be used with a front loader and others will have a window full of extra monitors to control sprayers, fert spreaders and drills.

Fendt had the answers here, too, with a monitor rail running along the roof to keep screens out of the way and the window clutter-free. Others, such as Case and Valtra, provided frames to clamp the screens to.

Controls-wise the Deere and Valtra did without joysticks – a downer if you like everything within a finger’s reach but it does keep the armrest pretty uncluttered. At the other end of the scale, Claas peppers the armrest with programmable F-buttons, which can get a little complicated for anyone who isn’t German.

For the second successive German tractor test it was FPT that provided the most efficient engine. This time it was the super-frugal Case Maxxum recording specific consumption figures of 223g/kWh and 228g/kWh at max power with AdBlue added. The average was up at 242g/kWh.

Valtra’s Agco Power engine – a perennial top performer in DLG tests – was the runner-up with its better-than-average 238g/kWh (including AdBlue).

It’s the six-point partial load test that is the best indicator of mixed farming work, though, where the DLG measures the weight of fuel required to produce 1kW for an hour at different load and throttle points.

The results weren’t so clear-cut and the Case was pipped at the post by the Fendt’s 256g/kWh (inc AdBlue).

Meanwhile, maximum power was provided by the Valtra, which recorded 158hp and 165hp when the boost kicked in. John Deere provided less in the grunt department – 126hp which rose to 137hp with boost. Two manufacturers decided against adding boost to their tractors – Fendt and Claas.

Trailing the pack on pretty much every engine test was the Deutz, which glugged its way through the diesel tank. However, the manufacturer reckons something was amiss with the on-board computer and has packed it back off to the DLG for a re-test.

We had a mix of transmissions in the line-up. They ranged from the silky-smooth shifts of the CVTs in the Deutz and premium-priced Fendt to the almost unbeatably simple stick-shifter in the Deere.

It was the Fendt’s familiar Vario CVT that scored highest, mainly for the range of functions settable through the screen and abundance of cruise speeds.

It wasn’t the most frugal or the most powerful in the draft test, though. The Case, again, sipped the slowest from its fuel tank and recorded 265g/kWh to beat the Claas and Valtra into first place.

But the Finn did manage to put 137hp to the ground – the best on test. It had a reasonably efficient transmission, too, although it was the less powerful but simple-to-use Deere that put 90% of its power to the ground. At the other end of the spectrum was Fendt’s power-hungry Vario, which sent just 81% of engine power to terra firma.

At first glance the short wheelbase of the Deutz looks best suited to life on the loader. But, surprisingly, it recorded a clumsy 12m turning circle. Elsewhere, neither the Claas nor Valtra had practical roof hatches and left the Fendt as the number one choice in this department.

At 10.6m it was the tightest turner (helped by a quick-steer system that halves the turns of the wheel) and had the Bavarians’ curving front window, which disappears into the cab roof and provides unrivalled upwards visibility.

We also took a look at linkage, hydraulics, four-wheel drive and diff-lock functions, and their level of automation.

Average rear lift was 6.8t, but the test group was well spread from the 5.7t lift capacity of the Claas up to Deutz’s 8.1t.

It was also the Deutz that had the best layout of four-wheel drive and diff-lock. Its idiot-proof colour-coding and simple automatic button topped the scorecard. Some, like Fendt, hide hitch adjustments in the depths of the screen, while others keep it simple with quick-adjust dials.