Rural roads can be dangerous places, as this three-way collision between a van, car and tractor bears witness. Police believe the accident involved a closing speed of 100mph.
The tractor driver reports that he was very glad he was wearing his lap belt, as his tractor went from full speed to stationary virtually in its own length. 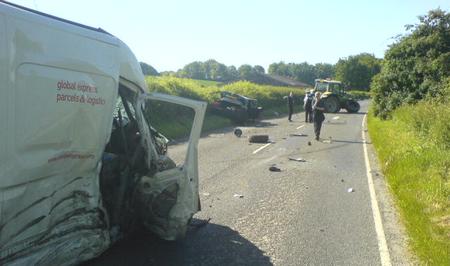 He was spun through 90deg as the van hit the tractor, which in turn hit the car behind, then spun 180 degrees and ended up with three wheels and a long way away from the impact.
The tractor was a write-off, as was the van and the car. The damage to the tractor didn’t look too bad but the front axle was split, the drive shaft pushed back into the rear axle and the rear axle was split round the bell housing.
No was injured, though the van driver was a bit shocked and had a bleeding nose from where his air bag went off
See more
Share this
Advertisements