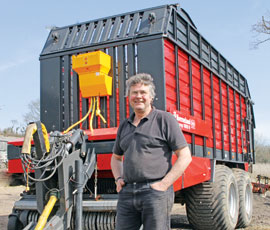 Given the right machinery, zero grazing can be used as part of a grazing and grassland management system. Andy Collings reports.

Dairy farmer Russell Gambier (pictured) says he doesn’t believe it’s right for cows to be housed all the year round but concedes it is far easier to maintain a consistent diet if they are.

“The problem comes when the cows are turned out to grass,” he explains. “All of a sudden you’ve lost control of how much the cows eat and the nutritional value of what they do eat.”

It’s a problem many dairy farmers face and is perhaps the prime reason why more than a few choose to house their cows throughout the year and continue to feed the same silage-based diet.

There is a compromise though and it’s all about bringing freshly cut grass to the cows not only when they are housed but also when they are in the field.

Zero grazing is not a new concept, it has been used by the dairy industry for decades, but it is perhaps only now, with modern machinery, that its potential can be fully exploited.

“I think that zero grazing, if it is performed properly, can be a valuable system,” says Mr Gambier. “It can provide a whole new level of flexibility to the way the cows are managed and also saves on silage costs.”

“We grow the maize and wholecrop along with an area of Italian ryegrass on what I consider to be the most workable and fertile parts of the farm,” he explains. “The main body of the grassland is reseeded at longer intervals but the vast majority is now in modern grass varieties and should perform well, given adequate rainfall.”

The dairy herd currently runs to 260 cows, following the addition of 80 freshly calved heifers earlier this year and there are plans to increase herd size to 350, which will require the current 18/18 herringbone parlour to be extended.

At the heart of the system is a Taarup 10055R forage wagon, which is used not only for the zero grazing but also to bring chopped grass into the silage clamp. 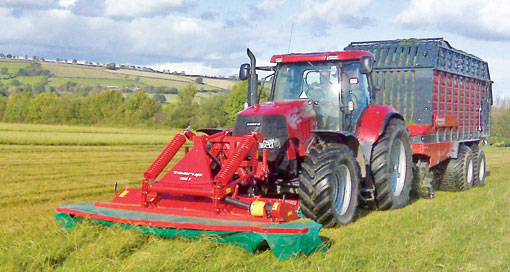 When cutting loads for the cows to eat fresh, the farm’s Case Puma 195 tractor is fitted with a 3m Taarup front-mounted mower, which cuts the grass for the trailed forage to pick up and feed out. For zero grazing, the grass is not chopped.

“The wagon has a capacity of 55cu m and, depending on the amount of grass available in the field, takes about 10 minutes to collect a load,” explains Mr Gambier.

For silaging, a contractor is employed to mow and rake the grass, leaving him to pick it up with the forage wagon and take it to the clamp. A contractor is also used to harvest the wholecrop and the maize.

“Zero grazing offers many advantages,” he says. “For starters, it allows me to utilise fresh grass early in the season when the ground is too wet to carry the cows without poaching. This avoids having to feed silage that we can better use in the winter.”

And as the season progresses, the flexibility of the system becomes even more apparent.

“The system is, in effect, a way of opening up areas of the farm for grazing that it would be impractical for the cows to walk to,” he says. “I can cut and feed grass from fields on the other side of the road from the farm and at distances of a mile or more.

“And should it be a very dry time, like last year, I can use some of the grass designated for silage to feed them – I can put it in the ring feeders in the field as a form of buffer feed.”

Mr Gambier also makes the point that modern Italian rye grasses can head quickly so the ability to cut and feed when he needs to and preserve the feed quality of the grasses is an important part of grass management.

“I can cut grass to leave a stubble to promote a quicker recovery and allow grazing to resume,” he explains.

The list of advantages also includes the point that cows put into a fresh crop of grass can soil and trash large areas that are not then properly grazed – zero grazing avoids this.

“We can also save on silage by continuing to feed fresh grass for a few weeks after the cows have been housed in the autumn,” he says.

On the downside, fresh grass has a relatively short shelf life and needs to be cut daily if spoilage is not to occur.