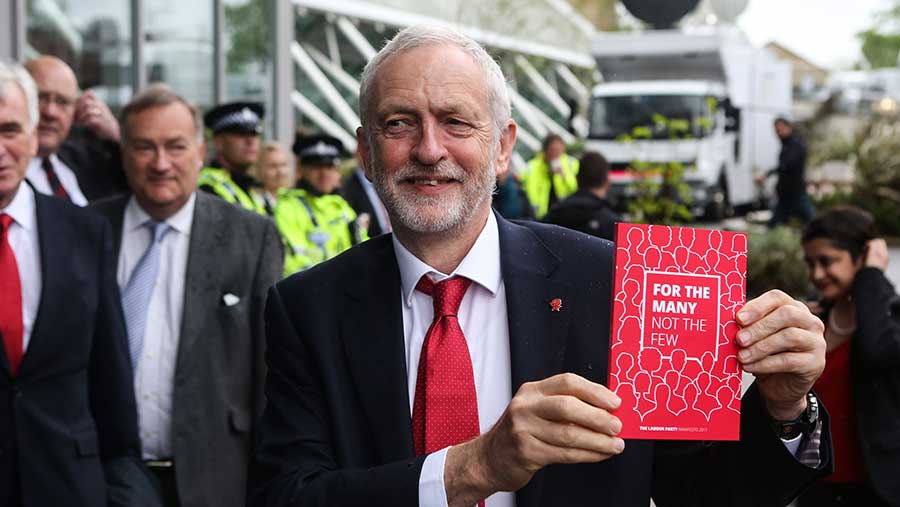 The document was launched by the Labour leader on Tuesday (16 May).

“Only a Labour government will prioritise a sustainable, long-term future for our farming, fishing and food industries,” claims the 128-page document [pdf].

The manifesto includes previously leaked promises to ban neonicotinoids as agrichemicals, end the badger cull to combat bovine tuberculosis and maintain the ban on hunting with hounds.

In total, the document contains 15 manifesto pledges which have particular relevance for agriculture.

What do you think of Labour’s pledges for agriculture? Tweet us your views to @FarmersWeekly email johann.tasker@rbi.co.uk

The manifesto promises that a Labour government will:

1. Secure continued EU market access allowing British farmers and food producers to continue to sell their products on the Continent.

2. Protect British farmers and rural economy by ensuring Britain continues to set the highest standards in food quality and welfare.

3. Not allow Brexit to be used as an excuse to undercut British farmers and flood Britain’s food chain with cheap and inferior produce.

4. Expand the role of the Groceries Code Adjudicator to ensure suppliers and consumers get a fair deal.

6. Allow EU workers employed across farming, fishing and food manufacturing to remain in the UK, and reinstate the Seasonal Agricultural Workers Scheme.

7. Reinstate the Agricultural Wages Board to underpin employment standards and wages.

9. Protect bees by prohibiting neonicotinoids as soon as the UK’s EU relationship allows the government to do so.

10. Work with farmers and foresters to plant a million trees of native species to promote biodiversity and better flood management.

11. Establish a science innovation fund, working with farmers and fisheries, that will include support for our small-scale fishing fleet.